The US agriculture giant Monsanto and the German chemical giant BASF were aware for years that their plan to introduce a new agricultural seed and chemical system would probably lead to damage on many US farms, internal documents seen by the Guardian show.

Risks were downplayed even while they planned how to profit off farmers who would buy Monsanto’s new seeds just to avoid damage, according to documents unearthed during a recent successful $265m lawsuit brought against both firms by a Missouri farmer.

The documents, some of which date back more than a decade, also reveal how Monsanto opposed some third-party product testing in order to curtail the generation of data that might have worried regulators.

And in some of the internal BASF emails, employees appear to joke about sharing “voodoo science” and hoping to stay “out of jail”.

The new crop system developed by Monsanto and BASF was designed to address the fact that millions of acres of US farmland have become overrun with weeds resistant to Monsanto’s glyphosate-based weedkillers, best known as Roundup. The collaboration between the two companies was built around a different herbicide called dicamba.

In the Roundup system, farmers could spray glyphosate herbicides such as Roundup over the top of certain crops that Monsanto genetically engineered to survive being sprayed with the pesticide. This “glyphosate-tolerant” crop system has been popular with farmers around the world but has led to widespread weed resistance to glyphosate. The new system promoted by Monsanto and BASF similarly provides farmers with genetically engineered dicamba-tolerant soybeans and cotton that can be sprayed directly with dicamba. The weeds in the fields die but the crops do not.

Dicamba has been in use since the 1960s but traditionally was used sparingly, and not on growing crops, because it has a track record of volatilizing – moving far from where it is sprayed – particularly in warm growing months. As it moves it can damage or kill the plants it drifts across.

The companies announced in 2011 that they were collaborating in the development of the dicamba-tolerant cropping systems, granting each other reciprocal licenses, with BASF agreeing to supply formulated dicamba herbicide products to Monsanto. 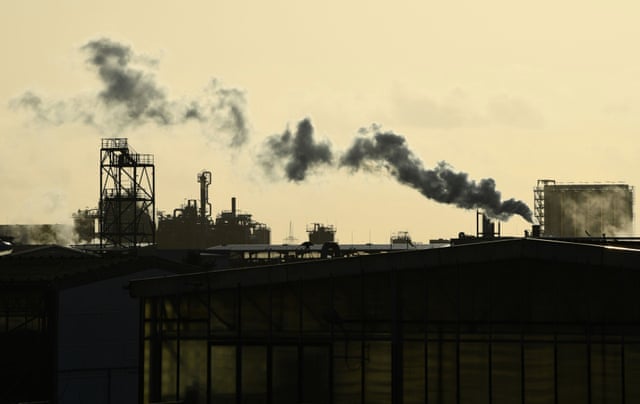 A chemical plant in Schwarzheide, Germany, owned by BASF, which has partnered with Monsanto on a dicamba-tolerant cropping system. Photograph: Annegret Hilse/Reuters

The companies said they would make new dicamba formulations that would stay where they were sprayed and would not volatilize as older versions of dicamba were believed to do. With good training, special nozzles, buffer zones and other “stewardship” practices, the company’s assured regulators and farmers that the new system would bring “really good farmer-friendly formulations to the marketplace”.

But in private meetings dating back to 2009, records show agricultural experts warned that the plan to develop a dicamba-tolerant system could have catastrophic consequences. The experts told Monsanto that farmers were likely to spray old volatile versions of dicamba on the new dicamba-tolerant crops and even new versions were still likely to be volatile enough to move away from the special cotton and soybean fields on to crops growing on other farms.

Importantly, under the system designed by Monsanto and BASF, only farmers buying Monsanto’s dicamba-tolerant cotton and soybean seeds would be protected from dicamba drift damage. Other cotton and soybean farmers and farmers growing everything from wheat to watermelons would be at risk from the drifting dicamba.

According to a report prepared for Monsanto in 2009 as part of industry consultation, such “off-target movement” was expected, along with “crop loss”, “lawsuits” and “negative press around pesticides”. 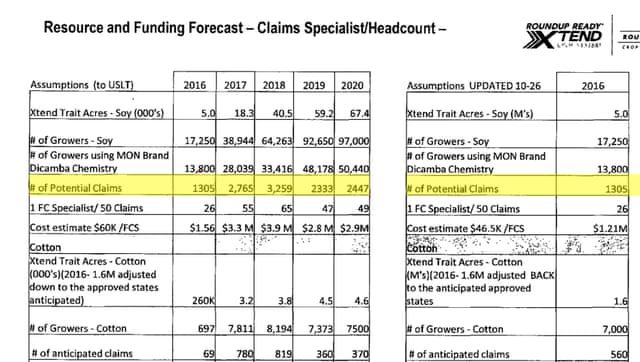 Both Monsanto and BASF defended their products and their different roles in bringing the new dicamba crop system to market. BASF said dicamba is safe “when used correctly” and an important tool for farmers. Monsanto said its XtendiMax dicamba herbicide, which it said was not invented until 2012, was “comprehensively evaluated” by the Environmental Protection agency (EPA) “and determined it does not pose any unreasonable risks of off-target movement when used according to label directions”.

Several million acres of crops have now been reported damaged by dicamba, according to industry estimates. And more than 100 US farmers are engaged in litigation in federal court alleging Monsanto and BASF collaboration created a “defective” crop system that has damaged orchards, gardens and organic and non-organic farm fields in multiple states.

Last month the first trial over dicamba damage ended with a $265m jury verdict against Monsanto and BASF. The documents reviewed by the Guardian were obtained through court-ordered discovery by the law firm that won that case. 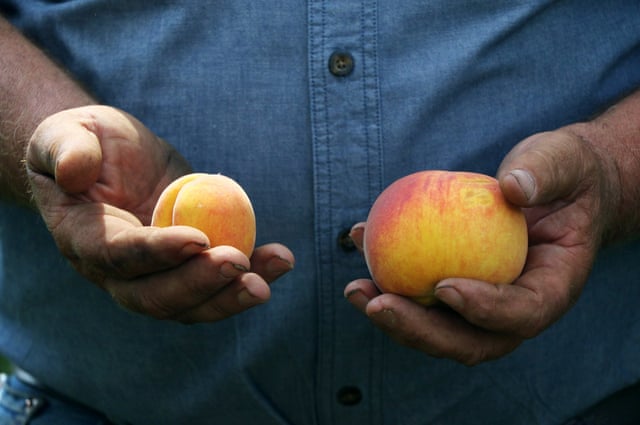 Bill Bader shows a comparison between a healthy peach, right, next to one of the smaller peaches that have been a common sight in his orchard, near Campbell, Missouri. Photograph: Bryce Gray/AP

BASF and Monsanto’s German owner, Bayer AG, has denied liability and has said it plans to appeal against the verdict in the peach farmer case. Their products are safe and effective when used correctly, both say. Monsanto’s owner, Bayer is also dealing with thousands of lawsuits alleging its glyphosate weedkillers cause cancer. Three juries so far have found that Roundup is carcinogenic and that Monsanto hid the risks.

Just as Monsanto has done in the Roundup litigation, Monsanto and BASF sought to keep most of the discovery documents they turned over in the dicamba litigation designated confidential. Roughly 180 have been unsealed and were cited at the Bader trial.

“The documents are the worst that I’ve ever seen for any case that I’ve worked on,” said lawyer Angie Splittgerber, a former tobacco industry defense attorney who works with Randles in the firm Randles & Splittgerber. “So many of them put things in writing that were just horrifying.”

Though they worked together to gain regulatory approval for the dicamba seeds, Monsanto and BASF each developed their own distinct dicamba herbicide products to be used with those seeds. And though the seeds were released for planting in 2016, the companies were unable to garner regulatory approval to start selling their new herbicides before 2017.

Academics were skeptical of the companies’ new use plan for dicamba from the outset but became more worried when the dicamba-tolerant seeds were commercialized before the new dicamba formulations. As critics had predicted, farmers who bought the new seeds then started spraying their fields with old dicamba formulations despite stickers on the seed bags prohibiting them from doing so.

The documents show that both companies were excited about the profit potential in the new system. BASF projected its new dicamba herbicide would be a “$400m brand in two years”, with sales by May 2017 exceeding $131m and a gross profit of 45%.

The companies saw part of the opportunity in selling to soybean and cotton farmers who didn’t need or want the special dicamba-tolerant crops but could be convinced to buy them as a means to protect their crops from dicamba drift, the documents show.

That strategy was noted in multiple documents. In one BASF 2016 strategy update, the company noted “defensive planting” as a “potential market opportunity”. Monsanto also saw “new users” in farmers who suffered drift damage.

In one November 2016 email exchange, a Monsanto distributor noted that “all the dicamba drift damage complaints” were spiking demand for Monsanto’s dicamba-tolerant seed. The Monsanto executive responded: “We have more potential this year than I have ever seen since 09 to blow it out.”

In its statement to the Guardian, Monsanto denied that it had planned to target drifters to become new users. The Guardian asked Monsanto to comment on warnings in 2009 that its plan to develop a dicamba crop system could damage farms. Monsanto said this was false and that it stood behind its system. The company said it takes “stewardship responsibility very seriously when introducing any new technology”. 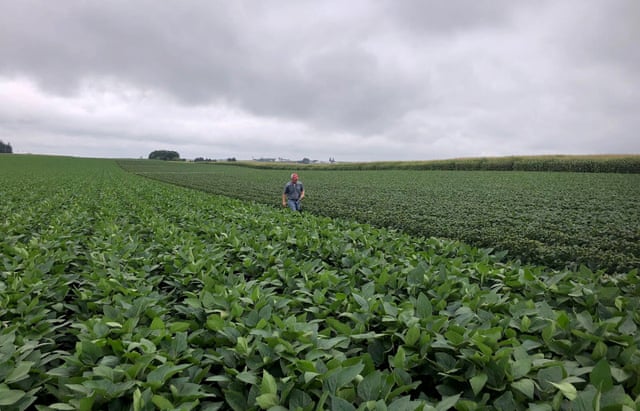 Soybean fields in Arlington, Wisconsin, in August 2018, are among those which have been examined for possible damage from dicamba drift. Photograph: Tom Polansek/Reuters

A series of emails show efforts by Monsanto to block some independent testing by academics of the company’s new dicamba herbicides, in part for fear outside tests would disrupt the company’s efforts to gain product approval from the EPA.

The agency was aware of the volatility concerns and Monsanto was seeking to convince the EPA that the concerns were unfounded.

Two months later, in April 2015, Monsanto’s Robert Montgomery, who worked in technology development in Tennessee, wrote to colleagues that a University of Arkansas weed scientist had asked if Monsanto would provide “a few milliliters” of its Xtend-formulated dicamba herbicide for testing by academics. Montgomery said the weed scientist was told Monsanto was “not testing formulation this year because of the difficulty in producing quantities that would allow for broader testing”.

In its statement, Monsanto said it had “facilitated a number of third-party tests” before and after EPA approvals.

Monsanto added that emails where individuals were occasionally using “shorthand or colloquialisms” had been “cherry-picked” by lawyers at the recent trial and this does “not detract from the fact that the products we are talking about were thoroughly tested and approved (twice) by the EPA”.

By late 2017, a Monsanto email thread referred to the “wall-to-wall damage we’ve been seeing”.

The high level of damage led the EPA to place new restrictions on the use of the dicamba herbicides in 2018, though the agency extended the registration until 20 December 2020. Monsanto, BASF and Corteva, which also markets a dicamba product, are hoping the registrations will be renewed.

Because of farmer concerns that dicamba drift would contaminate fruits and vegetable plots, the internal documents show that Monsanto and BASF devised a plan to ask the EPA to allow certain amounts of dicamba residues to be considered legal in crops such as tomatoes, potatoes, grapes and other foods expected to be accidentally exposed to dicamba spray.

The EPA said since Monsanto’s new seeds were introduced the agency has received about 1,851 “major” and 2,221 “aggregate” damage reports, but cautioned that might not be a total tally.

“EPA is taking the reports of crop damage related to the use of dicamba very seriously,” an EPA spokesperson said. “We are working with the states and the registrants to better understand the issue so we can address the problem of illegal drift. Considering the incidents that have been reported, we are reviewing the current use restrictions on the label to see what changes can be made so that unwanted exposures will not occur.”

Randles, the Bader attorney, said farmers are worried about continued damage. “Dicamba is a problem that could have been managed,” he said. “Instead they allowed it to become a catastrophe. They’ve mismanaged this from start to finish.”

In a statement, BASF said: “BASF believes that dicamba is safe when used correctly following the label instructions and stewardship guidelines and is an important tool for farmers who are increasingly battling resistant weeds.

“BASF and Monsanto are different entities and any effort to impute to BASF any misconduct by Monsanto is flatly wrong. In the recent trial, the jury made punitive damages findings against Monsanto, not BASF. For all the reasons that BASF has explained in court, BASF disagrees with the trial court’s judgment that BASF should be responsible for Monsanto’s conduct.”