The UN - On the Brink of Becoming the World Government 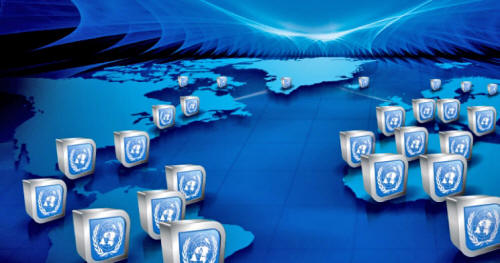 During his presentation, Lord Monckton focused on the UN climate treaty that was being proposed for the United Nations Climate Change Conference in Copenhagen that December.

I read that treaty. And what it says is this: that a world government is going to be created. The word “government” actually appears as the first of three purposes of the new entity.

The second purpose is the transfer of wealth from the countries of the West to third world countries.... And the third purpose of this new entity, this government, is enforcement.

Not just any government, mind you.

“They are about to impose a communist world government on the world,” warned Monckton.

At the UN’s Rio+20 Earth Summit on Sustainable Development in Rio de Janeiro, Brazil, in June 2012, the world government advocates were pushing even grander schemes.

Lord Monckton, who heads the policy unit of the U.K. Independence Party and is chief policy advisor to the Washington, D.C.-based Science and Public Policy Institute, told The New American’s Alex Newman,

“They were still effectively talking about a mechanization for setting up a global government so that they could shut down the West, shut down democracy, and bring freedom to an end worldwide.”

Is that merely the ranting of a madman?

That’s what the usual suspects at the Huffington Post, MSNBC, and other organs of the liberal-left corporate media would have us believe.

He is a “climate-change denier,” a “moonbat,” a “conspiracy wacko.”

That is the same response that has greeted anyone and everyone who has dared not merely to criticize the United Nations’ faults and abuses, but to point out the danger of a UN that is evolving into an actual world government - with real teeth and enforcement powers.

However, very influential Americans, as well as foreign leaders, in politics, media, and academe, have been advocating - blatantly and openly, as well as indirectly - for transforming the United Nations system into a full-blown world government. What’s more, they have begun actual implementation.

It is no longer hypothetical that the UN and its affiliated institutions will usurp legislative, executive, and judicial powers, including taxing, policing, and military powers. It has already begun; it is already happening.

And it is happening with the acquiescence, approval, encouragement, and funding of globalists in our own government, both Republicans and Democrats.

Walter Cronkite, the late CBS anchorman and broadcast icon often referred to as “the most trusted man in America,” stated in 1999:

It seems to many of us that if we are to avoid the eventual catastrophic world conflict we must strengthen the United Nations as a first step toward a world government with a legislature, executive and judiciary, and police to enforce its international laws and keep the peace.

To do that, of course, we Americans will have to yield up some of our sovereignty. It would take a lot of courage, a lot of faith in the new order...

We cannot defer this responsibility to posterity. Democracy, civilization itself, is at stake. Within the next few years we must change the basic structure of our global community from the present anarchic system of war… to a new system governed by a democratic U.N. federation.

Cronkite made that statement in a 1999 speech to the World Federalist Association, one of the oldest and foremost organizations promoting world government.

Strobe Talbott may not be as well known as “Uncle Walter” Cronkite, but he wields considerable influence among political elites.

In a highly acclaimed essay he penned for Time in 1992, entitled “The Birth of the Global Nation,” Talbott declared:

In 1795 [philosopher Immanuel] Kant advocated a “peaceful league of democracies.” But it has taken the events in our own wondrous and terrible century to clinch the case for world government.

Federalism has already proved the most successful of all political experiments, and organizations like the World Federalist Association have for decades advocated it as the basis for global government.

Gideon Rachman, an enthusiastic one-worlder and a leading economic opinionator for the very influential Financial Times, authored a Times op-ed on December 8, 2008 entitled, “And Now for a World Government,” in which he approvingly observed:

So, it seems, everything is in place. For the first time since homo sapiens began to doodle on cave walls, there is an argument, an opportunity and a means to make serious steps towards a world government.

Rachman was excited that the global financial crisis was presenting a rich opportunity so that,

“for the first time in my life, I think the formation of some sort of world government is plausible.”

Rachman described the desideratum that he and fellow internationalists are working so hard to bring about:

A “world government” would involve much more than co-operation between nations. It would be an entity with state-like characteristics, backed by a body of laws. The European Union has already set up a continental government for 27 countries, which could be a model.

The EU has a supreme court, a currency, thousands of pages of law, a large civil service and the ability to deploy military force.

Similarly blatant calls for empowering the United Nations could be cited ad infinitum.

But the fact is that the empowerment is already well under way.

Much of the superstructure and infrastructure for the physical edifice of a world government already have been built.

The United Nations’ official organizational chart and the world map (click below image) give an ominous inkling of the global leviathan that is already in place: 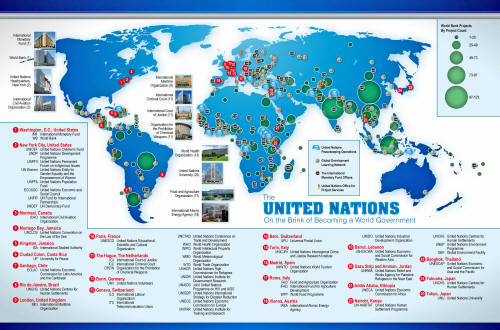 But only an inkling; it actually vastly understates the magnitude of the organizational sprawl of the UN worldwide, since it merely shows the locations of the headquarters offices of the main UN agencies and only a few of the many regional offices or field operations of these agencies.

Take, for instance, the UN’s World Health Organization (WHO).

In addition to its mammoth Geneva headquarters, it also has six huge regional offices:

Likewise, the UN’s Food and Agriculture Organization (FAO) is located in a huge gleaming palace of glass and marble a short walk from the Colosseum in Rome.

But it also has,

The story is similar at UNESCO, which, besides boasting a palatial edifice in Paris, called the World Heritage Center, has field offices, cluster offices, national offices, regional bureaus, and liaison offices in more than 50 countries throughout the world.

This same pattern is repeated for many other UN agencies.

Besides putting in place a vast civil service of administrators and bureaucrats to run the planned world government, the ever-expanding UN system has created a huge global constituency of local and national politicians, corporations, and NGOs that benefits from the UN’s presence and can be counted on to lobby for its continued expansion.

Gideon Rachman’s statement above referring approvingly to the European Union (EU) as a model for the UN is particularly apropos.

For decades, critics of the Common Market (as the EU was called before 1993) warned that the organization was being built piece by piece, agency by agency, into a supranational government, only to be derided as paranoid wackos by EU proponents.

Now, of course, all pretenses are being dropped because the EU is de facto a supranational government that completely overrides the national and local governments of its member states.

The UN’s rapidly growing organizational footprint is most jarringly visible throughout the Third World, where offices of,

...dominate the political and economic landscape, and,

The gradual development of the UN from an international organization into a world government was planned from the world body’s beginning in 1945. One of the UN architects at the UN founding conference in San Francisco was John Foster Dulles, who served as U.S. secretary of state from 1953 to 1959.

In his 1950 book, War or Peace, Dulles, a committed one-worlder and a founder of the one-world Council on Foreign Relations, wrote of the then-five-year-old UN:

“The United Nations represents not a final stage in the development of world order, but only a primitive stage. Therefore its primary task is to create the conditions which will make possible a more highly developed organization.”

The push to empower the UN with global legislative, executive, and judicial powers has already yielded huge dividends, and UN bodies are now exercising those powers to various degrees - and constantly pushing to usurp more control.

Here is a brief survey.

“A new global reserve system could be created, one that no longer relies on the United States dollar as the single major reserve currency.”

According to the UN report, a new reserve system “should permit the emission of international liquidity - such as SDRs - to create a more stable global financial system.”

A global currency would allow whoever controls the currency (in this case the IMF) to control the world economy and to enjoy unlimited financial power. And it could “bail out” or subsidize any company it wishes, to the detriment of other companies.

Like a global Federal Reserve, it could confiscate wealth by simply inflating the currency.

“Make no mistake about it,” warned Rep. Ron Paul (R-Texas) in 2005, “WTO ministers tell Congress to change American laws, and Congress complies. In fact, congressional leaders obediently scrambled to make sure the corporate tax bill passed before a WTO deadline. Thousands and thousands of bills languish in committees, yet a bill ordered by the WTO was pushed to the front of the line.”

The UN grabs for power cited above are far from a complete list.

The UN’s Law of the Sea Treaty (LOST) aims to give the UN authority over the planet’s,

The UN’s World Health Organization and Food & Agriculture Organization are in charge of the Codex Alimentarius, the UN effort to regulate and take control over raw food, processed food, and semi-processed food, including vitamin and mineral supplements, herbs, and other nutritional products.

UNESCO has insinuated itself into American schools and families through “partnerships” with our federal and state Education Departments that include curriculum design and invasive, psychologically manipulative “emotional wellness” evaluations.

The UN Population Fund (UNFPA) not only supports forced abortion in China, but works assiduously with Planned Parenthood to overturn national abortion laws and make abortion legal and commonplace worldwide.