Around 20,000 people attended the rally at Edinburgh Place, according to organisers. Demonstrators displayed placards saying “Stop tear gas” and held up their mobile phone flashlights as they chanted their demands.

The crowd shouted slogans such as “City of tear, people in fear” and “Respond to our demand, disclose the composition of the tear gas.”

A spokesperson for the movement’s Citizens’ Press Conference said that around 15 percent of 18,000 people surveyed online reported having experienced diarrhoea or stomachache after contact with tear gas. Thousands were on the streets to protest against these chemical weapons. Meanwhile, 18 to 23 percent of those surveyed said they had suffered from respiratory, eye and skin issues following tear gas exposure. “Everyone knows that the residue [of the tear gas] will not be dissolved shortly; instead, they are going to affect generations to come,” the spokesperson claimed. “Facing the Hong Kong puppet government’s blatant attempt to terrify and crush us with brutality and toxic gas, the Citizens’ Press Conference [urges] the governments and authorities around the world to identify this as a humanitarian crisis, and [they] should impose sanctions [on] all those who are harming us politically and physically,” he added. The police force have fired around 10,000 rounds of tear gas since June, prompting public health concerns. Last month, a Stand News reporter who has frequently covered the protest frontlines said that he had been diagnosed with chloracne, a skin condition that has been linked directly to exposure to dioxin-like substances. He suspected that it might be linked to his frequent contact with tear gas.

Dioxins in tear gas can cause cancer, reproduction and developmental problems, according to the World Health Organisations. They are highly toxic and can also interfere with hormones and the immune system. However, welfare chief Law Chi-kwong told the legislature on Wednesday that “those who were exposed to tear gas generally experienced mild respiratory and skin irritation, and there was also no serious health impact reported.” Meanwhile, the police force and Secretary for the Environment Wong Kam-sing blamed harmful pollution on the burning of garbage and barricades by protesters. The Hong Kong authorities have come under fire for refusing to disclose details on the ingredients of tear gas. The police have said that the information is deemed sensitive as it concerns the force’s operations.

During Friday’s rally, a spokesperson for the citizen-led Public Health Research Collaborative warned of a public health crisis if the authorities continue to use tear gas while refusing to be transparent. “There are no ways of finding out what kind of toxic chemicals are being released by tear gas, so it is difficult to tell people how to clean up or protect themselves,” the spokesperson said.

“Hong Kong is now of great interest to researchers because there is no other place on earth where the use of tear gas is so concentrated and constant, and takes place in an area with such a high population density,” she added. “As a Hongkonger, I am very worried and sad about this.” There have also been numerous reports of animals such as birds and cats being found dead in areas where tear gas had been fired.

Grace Cheng, a veterinarian, shared tips in a recorded video on how to take care of pets affected by the chemical. She urged the authorities to consider beyond the health impacts on humans.“There are living creatures other than humans, such as birds, stray animals and pets. We all share the same ecosystem and we should respect each other,” she said. “We should cherish the natural environment, not fire tear gas non-stop, destroying nature and contaminating our future generations or other living things.” A demonstrator held up a banner saying “We persist not because we see hope, but because only if you persist will there be hope.” December 6, 2019. Photo: Benjamin Yuen/USP United Social Press.

The rally ended peacefully at around 9pm. Some rallygoers urged others to participate in a march organised by the Civil Human Rights Front that will begin at Victoria Park at 3pm this Sunday. Meanwhile, a smaller protest also took place on Friday evening. Dozens of students from more than ten secondary schools gathered in Kwai Ching in support of the protest movement. Dressed in school uniform, they called on Hongkongers to continue protesting and speaking up against alleged police brutality. A demonstrator told Stand News that he was worried about the apparent decline in participation among nonviolent protesters recently. Next Monday marks the six-month anniversary of Hong Kong’s largest protest movement since the million-strong march that took place on June 9. The protests were triggered by a now-withdrawn extradition bill which would have enabled fugitive transfers to mainland China. The movement has since morphed into calls for democratic reform and accountability for the police handling of the crisis.

Hundreds of thousands hit the streets of Hong Kong

Thousands of black-clad protesters from all walks of life thronged the streets of Hong Kong on Sunday in a sign of broad support for anti-government demonstrations that have roiled the Chinese-ruled city for six months.

With chants of, "Fight for freedom, stand with Hong Kong," anti-government activists, young and old, marched from Victoria Park in the bustling shopping district of Causeway Bay to Chater Road near the heart of the financial district.

Authorities gave the green light to Civil Human Rights Front (CHRF) - organiser of largely peaceful million-strong marches in June - to hold the rally, the first time the group has been granted permission for a protest since August 18.

"I will fight for freedom until I die because I am a Hong Konger," said June, a 40-year-old mother dressed in black seated on the grass in Victoria Park. "Today is about standing with Hong Kong and the international community."

Millions have taken to the streets over the past six months in protests that began after the government tried to push through a now-abandoned extradition bill. The movement has since evolved into a campaign for greater democracy fuelled by concerns that China is whittling away at the civil liberties promised when Hong Kong was returned to Chinese rule in 1997.

"I must say I think that today there could be well over a million people at this protest," said Al Jazeera's Adrian Brown, reporting from Hong Kong.

"It is a reminder of what this protest movement was when it began almost six months ago - it was powerful and peaceful and that's what it is so far today," he said.

Some 6,000 people have been arrested and hundreds injured, including police, since June.The city has been relatively calm since pro-democracy candidates won a landslide victory in local council elections two weeks ago, but activists say anger is building again after Chief Executive Carrie Lam and Beijing ruled out any concessions.

Organisers have billed Sunday's event as a "last chance" for Lam to meet their demands which include an independent inquiry into the police's handling of the protests, an amnesty for those arrested, and free elections.

The government said in a statement on Saturday it had "learned its lesson and will humbly listen to and accept criticism".

CHRF, which advocates non-violence, was the driving force behind the record-breaking rallies earlier in the summer that saw huge crowds despite the oppressive heat.

Large crowds have simply ignored the bans, sparking near-weekly tear gas and petrol bomb clashes that have upended Hong Kong's reputation for stability and helped tip the city into recession.

Sunday afternoon's march will follow a well-worn route across the main island from Victoria Park to the heart of the commercial district. 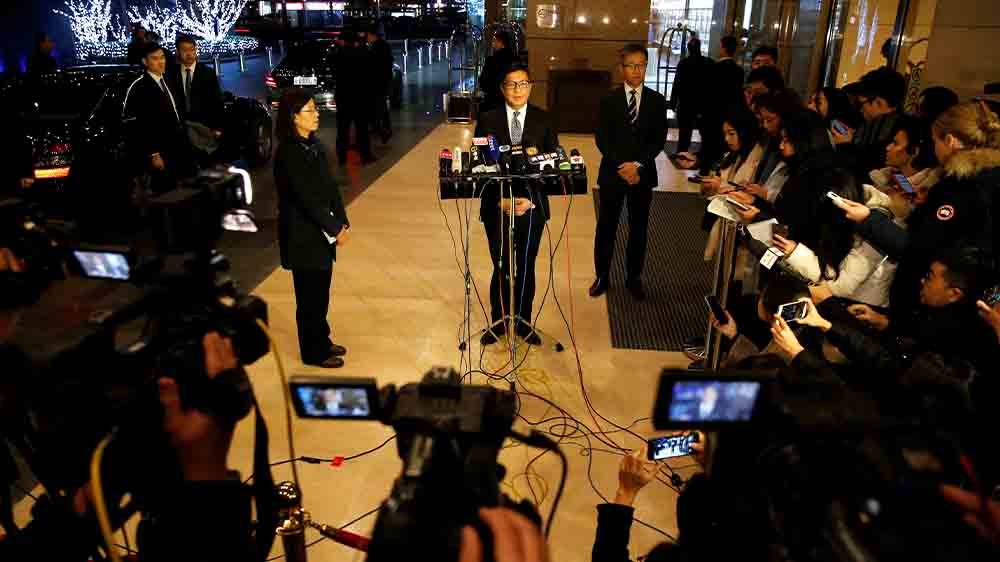 Online forums used to organise the movement's more radical wing have promised to target the morning commute on Monday if Lam and her government do not respond.

But there is little sign Lam is willing to budge, leading to fears the lull in street clashes will be temporary.

Since the local elections, the city's chief executive has remained steadfast in her opposition to further concessions and Beijing has stuck by her even as she languishes with record-low approval ratings.

The police force's reputation has also been damaged.

The city's new Police Chief Chris Tang has been in Beijing for the past two days, where he met senior party figures including public security chief Zhao Kezhi who gave his "strongest backing", according to official reports. A new poll released on Friday by the Hong Kong Public Opinion Programme, which has tracked public sentiment for years, showed record disapproval for the force with 40 percent of respondents now giving the force the lowest mark of zero.

Tang, who has continued his predecessor's policy of rejecting calls for an independent inquiry, said his officers would clamp down on any violence at Sunday's march.

"If there is arson, petrol bombs or damage to shops, we will take action," he told reporters in Beijing.
"But for minor issues, we will handle in a flexible and humane manner."