A colleague who had to leave Bolivia writes to me. She is being chased along with her partner whom the coup plotters are looking for in order to “liquidate him”, as she was told. Since before Evo Morales was forced to resign, a death-list of names began to circulate; and its application accelerated from that moment. It was Arturo Murillo, the de facto government minister, who was responsible for putting that hunting list in black and white: he talked about “hunting” three leaders, after chasing parliamentarians accused of “sedition” and “subversio,” as ommunication minister Roxana Lizárraga pointed out to “journalists and pseudo-journalists”. On Thursday the Telesur TV channel was taken off of Bolivian television stations.

The strategy of decapitation and persecution is part of the coup d’etat architecture that moves according to a series of planned steps.

The first was to force the resignation of Evo and Álvaro García Linera.

The second, build a de facto government, materialized from the self-proclamation of Jeanine Añez.

The third, initiated before and deepened in these days, is the persecution of leaders, along with the beginning of militarized repressions. This was announced even by a decree to exempt the armed forces from criminal responsibility and they received an additional budget credit of four thousand eight hundred million dollars.

The fourth step is the one that is under development now without having yet materialized, the call for general elections, for which new authorities of the Supreme Electoral Tribunal and the Departmental Electoral Courts must be appointed. This is the point of greatest complexity for those who are leading the coup, because the appointment of authorities for the TSE must pass through the legislative branch, where the Movement to Socialism (MAS) has two thirds of the seats. The de facto government and the real powers in the coup seek to force an agreement with MAS to accept the electoral call according to their conditions. That means getting MAS to recognize Añez as president, impose the electoral authorities, and, simultaneously, outlaw Evo Morales.

The fifth and final step will be the election as such. There is still no agreement within the coup block about the date. Fernando Camacho said that the deadline for the contest is January 19 – the 20th would end Evo’s mandate – while other voices have already raised that there are no conditions to achieve the election in January. This point is central to the structure of the coup d’etat that from the beginning was presented as democratic and thus was backed by President Donald Trump and his administration, by the secretary of the Organization of American States Luis Almagro and by the European Union.

But the democratic fiction that conceals the coup requires the call for elections. Añez appeared from the outset as interim president and the OAS itself, which denies that there has been an “institutional breakdown” – as Uruguay did, for example, asking to be incorporated in the last OAS resolution – urges the de facto government and the politicians to achieve that electoral call. What the coup leaders debate, without internal agreement so far, is about the times and conditions for those elections. They seek to guarantee the proscription of Evo Morales, some claim to do the same with MAS, and, in turn, have a TSE under control.

While that happens, the persecution deepens, police and military repressions have killed more than thirty people, pain and rage increase. Given this, there is resistance in the streets and in the legislative power that advance together, although not necessarily in a coordinated way. MAS, it has already announced, works to achieve electoral output under least favorable conditions. Can they achieve it? Several parliamentarians are under threat in a context of absolute coup impunity that has degraded to a self-proclamation without quorum and persecution even of dead people.

Marco Teruggi  is an Argentinian Sociologist. He played in the Anahí Association, in HIJOS and in the Popular Front Darío Santillán. Since the beginning of 2013 he lives in Caracas. Author of the books: "I always return to the foot of the tree", "Founded days" and "Chronicles of communes, where Chávez lives". Currently collaborates in Telesur, Latin American Summary, Notes, Sudestada Magazine, Amphibian, among others. - Website 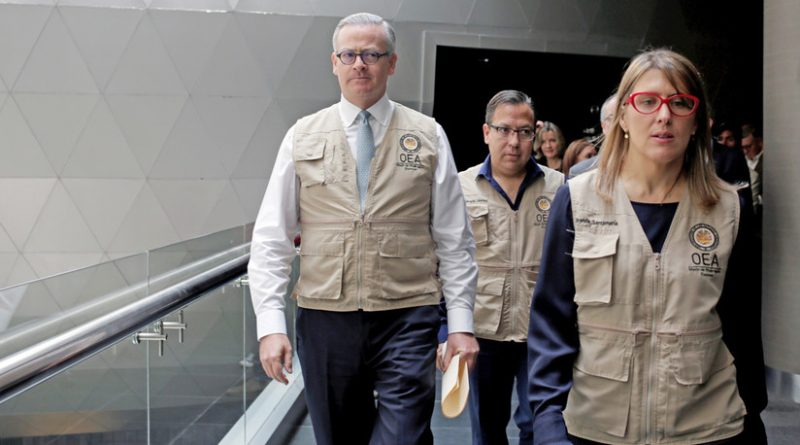 Two international studies, done by independent investigators, have contradicted the reports published by the Organization of American States (OAS) on alleged irregularities in the elections of October 20 and have shown that Evo Morales won in the first round without committing fraud.

One of the research papers is entitled ‘What happened in the vote count of the 2019 elections in Bolivia? The role of the OAS Electoral Observation Mission’ and was carried out by the Center for Research in Economics and Politics ( CEPR ).

This 18 page document summarizes the statistical analysis of the electoral results and the minutes of the general elections of last October 20 in Bolivia, which “does not show evidence of irregularities or fraud that has affected the official result that gave a first round victory to President Evo Morales».

According to the study prepared by Guillaume Long, David Rosnick, Cavan Kharrazian and Kevin Cashman, the OAS Electoral Observation Mission (MOE) supported a “post-election narrative without evidence” that referred to alleged inconsistencies in the process.

The Washington-based CEPR was founded by economists Dean Baker and Mark Weisbrot and includes as consultants the Nobel Prize in Economics winners Robert Solow and Joseph Stiglitz, among other specialists.

Understanding the TREP
In the Bolivian electoral system there are two mechanisms for scrutiny that work in parallel: one of rapid counting or Transmission of Preliminary Electoral Results (TREP), which both Bolivia and other countries have used following the recommendations of the OAS, and the Official Counting of the Votes or official calculation, legally binding according to Bolivian law.

As explained, the TREP is managed jointly by a private company and by the Civic Registry Service (SERECÍ). Its function is to deliver fast, non-binding and partial results on the night of the elections, unlike the official calculation.

The pause that took place between Sunday and Monday occurred because the quick count reached 83.85%. The remaining percentage corresponded to the rural vote, whose data could not be transmitted immediately due to the lack of nearby internet access.

Experts state that this pause was planned by the Supreme Electoral Tribunal, which had announced a week before the elections that it would announce the results of the rapid count after having verified at least 80% of the preliminary counts.

Objections to the OAS report
The MOE said one day after the elections, in a press release, “its deep concern and surprise at the drastic and difficult to justify change in the trend of preliminary results [of the quick count] known after the polls close”.

Until the transmission of 83.85% of the minutes, Morales had 45.71% of the votes, while Carlos Mesa, 37.84%, which meant a difference of 7.87 percentage points between both candidates. That is, until that moment avoiding the second round was not assured. However, this result was modified as the results were scrutinized.

Three days after the elections, the director of the MOE, Gerardo de Icaza, read his preliminary report before the Permanent Council of the OAS in which he stated that “the changes in the TREP trend were difficult to explain and did not coincide with the others available measures».

Analysts believe that “the mission did not provide evidence supporting these statements that suggest that the quick count could be incorrect or ‘difficult to explain’, so they conclude that:

Did the break alter the results?
The OAS has affirmed that after the pause, Morales’s difference over Mesa increased in such a way that the resigned president approached the ten percentage points necessary to avoid voting, so he expressed “his deep concern and surprise at the change drastic and difficult to justify in the trend of known preliminary results after the closing of the polls “.

At this point, the authors of the report wonder if “this ‘change in trend’ is truly ‘difficult to justify'”, to which they respond:

OAS politicization
In the report, which concludes that the OAS accusations have had a significant influence on public opinion, reference is made to the government of Donald Trump and his allies, such as Republican Senator Marco Rubio, who has made statements “suggesting that the election was stolen “.

RELATED CONTENT: A Week After the Coup in Bolivia, There’s Still no Proof of Electoral Fraud

The researchers believe that the politicization of an independent electoral monitoring process “becomes tangible” when the OAS “makes unsubstantiated statements that call into question the validity of an electoral count”, which is “dangerous” in the context of “political polarization and the post-election political violence that has taken place in Bolivia”.

As a recommendation, it is urged the “unfounded accusations” be withdrawn and to take measures “to ensure the neutrality of the electoral observation by the OAS in the future.”

The result did not change
Another of the analyses entitled ‘Evidence against fraudulent votes has been decisive in the election of Bolivia in 2019′ was presented by Walter Mebane, professor of the departments of Political and Statistical Sciences of the University of Michigan and one of the world’s experts in electoral fraud.

In the text, Mebane explains that “there is evidence that fraudulent votes in the elections were not decisive to the result”, after the use of the Eforensics model, which is the application of scientific methodology to computer media to establish factual information or provide expert opinions for legal proceedings.

This statistical model utilizes the idea that “frauds” occur when a party wins votes for a combination of votes obtained from “fabricating” abstentions and “stealing” votes from opposing parties.

This work showed that there were presumably “fraudulent” counts in 274 of the 34,551 tables set up by the elections in Bolivia.

The letter clarifies that the Eforensics model is new and “with capabilities that have not yet been fully understood”, so, although it resembles the counting of the electoral system, it can classify some votes as fraudulent without necessarily being so.

Mebane compares the statistical irregularities that could have indicated fraud, without having changed the final results, in elections in Honduras, Turkey, Russia, Austria and Wisconsin (USA) by analyzing them with the Eforensics model.

Results
According to the final results, Morales, of the Movement To Socialism (MAS), obtained 47.08% of the votes, while Mesa, of the conservative Community Community party, achieved 36.51%. Given the margin of more than 10 percentage points, which represent 648,439 votes, the president achieved the victory without needing a second round.

In the 342 municipalities in Bolivia, the MAS won in 289, which is equivalent to more than 85% of the total.

In the Plurinational Legislative Assembly, the MAS obtained 21 representatives before the Senators Chamber, which is composed of 36 seats, so it obtained an absolute majority.

As for the Chamber of Deputies, composed of 130 legislators, the official movement obtained 68 seats, so it also has an absolute majority.