They Want that YOU CAN'T HIDE

“We wouldn’t wait until something explodes to act. If three or five clients ask for the same thing . . . we’ll see that as important,” said Mr Huang, adding that its cameras previously only recognised people in masks half the time, compared with 99.5 percent accuracy for a full face image.

Since then, demand has soared, from police stations, railway stations and all the office towers that use Hanwang’s cameras to screen employees, and Mr Huang reassigned teams of people to work on the challenge.

The company now says its masked facial recognition program has reached 95 percent accuracy in lab tests, and even claims that it is more accurate in real life, where its cameras take multiple photos of a person if the first attempt to identify them fails.

“The problem of masked facial recognition is not new, but belongs to the family of facial recognition with occlusion,” Mr Huang said, adding that his company had first encountered similar issues with people with beards in Turkey and Pakistan, as well as with northern Chinese customers wearing winter clothing that covered their ears and face.

Counter-intuitively, training facial recognition algorithms to recognize masked faces involves throwing data away. A team at the University of Bradford published a study last year showing they could train a facial recognition program to accurately recognize half-faces by deleting parts of the photos they used to train the software.

When a facial recognition program tries to recognize a person, it takes a photo of the person to be identified, and reduces it down to a bundle, or vector, of numbers that describes the relative positions of features on the face.

But as the algorithm is applied against a larger population, there is a greater chance of misidentifying a masked face, since there is less information to work with compared with full faces and there may be multiple people with similar features around their eyes and nose.

In Hanwang’s case, Mr Huang said that the company’s devices were designed to work in office settings with a database of up to 50,000 employee faces. He said the system was able to use photos taken from the Chinese police’s identification card database of some 1.2 billion people, but that it was not built to work on such a huge system.

When a facial recognition system has calculated its vector of facial features for the person to be identified, it compares it to the vectors of the faces in its database, finding a match if it meets a certain degree of accuracy.

Hanwang’s system works for masked faces by trying to guess what all the faces in its existing database of photographs would look like if they were masked.

To improve its guesses, Hanwang asked its 2,000 or so employees for photos of themselves wearing masks, but also created another database of 6m photos of people with artificially generated masks — with different styles to reflect the ones commonly worn in China.

Police forces around the world are trialling facial recognition. When asked about its software being used to identify protesters in Hong Kong, Mr Huang said he had heard of the need for “anti-terrorist measures” in the region.

Mr Huang said that Hanwang’s market was mostly focused on entrance gates. “The market for the situation [you describe] in Hong Kong is too small,” he said. Hong Kong-based SenseTime, which also claims to have a solution to recognize masked faces, said it had no plans to apply its technology to public spaces.

Face Surveillance Is Not the Solution to the COVID-19 Crisis

In the current moment, governments may be tempted to funnel scarce public health resources into the use of face recognition to curtail the spread of COVID-19. Public health crises, especially a global pandemic, may require extraordinary measures in favor of the public good—but invasive face surveillance is not in the public’s interest.

This approach could involve building new infrastructure to conduct more face surveillance and large government contracts with some of the most nefarious surveillance technology vendors in the world. Companies like Clearview AI, which uses over two billion face images scraped from social media to track individuals and identify them with real-time face surveillance, are already in talks with agencies to provide assistance. Even as civil liberties groups call for a national ban on government use of face recognition, U.S. Customs and Border Protection is currently touting face recognition at airport check-ins as supposedly more hygienic than other screening.

Face recognition may seem convenient and useful, but is actually a deeply flawed technology that exposes people to constant scrutiny by the government.

The massive infrastructure required to run face recognition (such as cameras, software, and open-ended contracts with vendors) cannot be easily dismantled when the public health crisis is over. We cannot allow law enforcement and other government officials to normalize this invasive tactic. We know the truth about this spy tech: face recognition may seem convenient and useful, but is actually a deeply flawed technology that exposes people to constant scrutiny by the government, and has the potential to chill free speech and movement by identifying and tracking people as they visit their doctors, lawyers, houses of worship, or political demonstrations. It also can generate inaccurate reports.

It is all too likely that any new use of face surveillance to contain covid-19 would long outlive the public health emergency. In a year, systems that were put in place to track infected individuals as they moved through a city could be re-deployed to track people as they walk away from a political demonstration or their immigration attorney’s office. Face recognition software that is able to identify people even when they’re wearing surgical masks, as the company Hanwang has developed, could also be used to identify people who obscure their face at political protests out of fear of retribution from the government. We have to consider the afterlives of these technologies and the way their use can creep into everyday life after the emergency is over.

This is why EFF and concerned citizens continue to call on Congress to ban the government use of face recognition. You can take action here by telling your elected officials that this technology, today and in the future, erodes our civil liberties and undermines our participation in a free society.

You can also take EFF’s new quiz to see what government agencies use or share your photograph for the purpose of conducting face recognition. 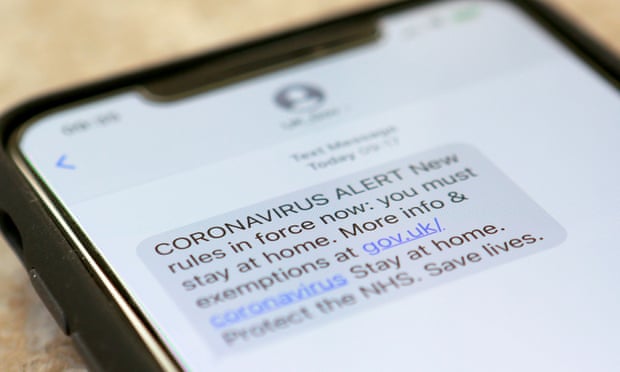 The British government is in talks about using phone location and usage data to determine the efficacy of isolation orders. Photograph: Russell Boyce/Reuters

The mobile phone industry has explored the creation of a global data-sharing system that could track individuals around the world, as part of an effort to curb the spread of Covid-19.

The Guardian has learned that a senior official at GSMA, an international standard-setting body for the mobile phone industry, held discussions with at least one company that is capable of tracking individuals globally through their mobile devices, and discussed the possible creation of a global data-sharing system.

Any move to create such a global tracking system would represent a major escalation in efforts to use mobile phone location data to help stem the pandemic, and would be likely to raise concerns among privacy and security experts.

Until now the use of mobile phone tracking in the fight against Covid-19 has been restricted to national governments, which are either monitoring data within their borders or in discussions with mobile operators and technology companies about doing so.

They include the US, India, Iran, Poland, Singapore, Israel and South Korea. The British government is engaged in talks with BT, the owner of the UK mobile operator EE, about using phone location and usage data to determine the efficacy of isolation orders.

The concept of an international mobile tracing scheme would go further, enabling authorities to monitor movements and potentially track the spread of the disease across borders. The GSMA represents the interests of 750 mobile phone operators and vendors across the world and helps set international standards for companies.

A person familiar with its exploratory talks said they were at an early stage and that decisions had not yet been made about whether to move ahead with the plan. The aim of such a global network would be to enact “contact tracing”, enabling authorities to use mobile location data to track who a person infected with Covid-19 may have come in contact with.

A spokesperson for GSMA strenuously denied it was currently involved in any project to create a global tracking system. “We are not involved in a project of this nature,” the GSMA spokesperson said. However the GSMA also said it would not comment on discussions that had taken place or ideas that were being explored.

“In this emergency situation, the GSMA and its members are doing everything they can to help the global fight against Covid-19,” Mats Granryd, the director of the GSMA, said in a statement emailed to the Guardian. “We are engaging with operators, policymakers and international organisations around the world to explore viable mobile big data and AI solutions to fight this pandemic while adhering to principles of privacy and ethics.”

Advocates of using mobile phone technology in medical emergencies say accurate and up-to-date information can be a vital tool.

The Washington Post reported last week that the US government was in active talks with Facebook, Google and other tech companies and health experts about how location data from Americans’ phones could be used to fight the pandemic. The report suggested public health experts were interested in anonymous aggregate data that could help map the spread of the virus.

The emergency measures approved by the Israeli government last week go further, enabling authorities to track individual people suspected or confirmed to have been infected to notify individuals who may have come into contact with them. They also allow phones to be used to enforce strict quarantine rules.

The proposed UK scheme would involve anonymised mobile phone data being used to monitor whether coronavirus limitation measures such as asking the public to stay at home are working. It could also be used to send health alerts. While the information provided on geographical movement would be delayed by 12 to 24 hours, British privacy campaigners have raised concerns over the scheme, calling for “radical transparency” in the way the government uses mobile data.

One telecommunications expert, who spoke to the Guardian on the condition of anonymity, said GSMA would be capable of creating a global data-sharing network if mobile operators around the world agreed to share usage information. That data would then be used to help authorities visualise the spread of the disease, or to track individual subscribers to perform “contact tracing”, using an individual’s location to detect how the disease might spread.

David Kaye, a UN special rapporteur on freedom of expression, said it was not necessarily a bad thing for governments to use technology as a means to help control the virus. But he said there were important rule of law standards that had to be taken into account if emergency measures were put in place, including the possible tracking of individuals by mobile phone companies.

He said these included alerting individuals whose data was being tracked, being fully transparent about the data collection and subjecting any such initiatives to judicial oversight. He also said there should be sunset provisions in place and continuously reviewed so that emergency measures did not become permanent.

“When I think about how these tools can be helpful, making sure they are adhering to basic standards is really important,” Kaye said.