'My culture on my face'

Ta moko, the traditional tattoo symbolising a Maori's heritage, is making a comeback after colonial suppression.

Ta moko, a cultural tattoo artwork, adorns Harding's face and body, a visualisation of his Maori "whakapapa" or genealogy, his role in the community and his life's journey.

"I enjoy when someone asks questions, then I have the opportunity to share and educate them, rather than just staring and making assumptions," he told Al Jazeera.

For generations, ta moko was outlawed and later adopted by Maori gangs, which led to widespread discrimination and stigma that made finding work and social acceptance difficult.

But its image is slowly changing as a new generation embraces ta moko and more and more companies, including service industries, government sectors and even political parties, abandon their exclusion policies.

New Zealand's Indigenous Maori were renowned as skilled hunters, warriors and artists. They were also famous for traditional performances, including the fearsome Haka, a ceremonial dance.

Before colonisation brought western materials, tribal designs were carved into the skin with a chisel-shaped instrument made of bone, the incisions coloured with ash or other natural substances.

Different tribes had their distinctive artistic styles to adorn various parts of the body including the back, chest and limbs. The most sacred were reserved for the face.

New Zealand was colonised in 1840 and a suppression act in 1907 outlawed the teaching and practice of Maori culture.

For generations, ta moko was scarce.

"My grandparents would get caned for speaking the language at school," Harding said, adding that ta moko became something that was only seen among tribal elders or in old photographs. 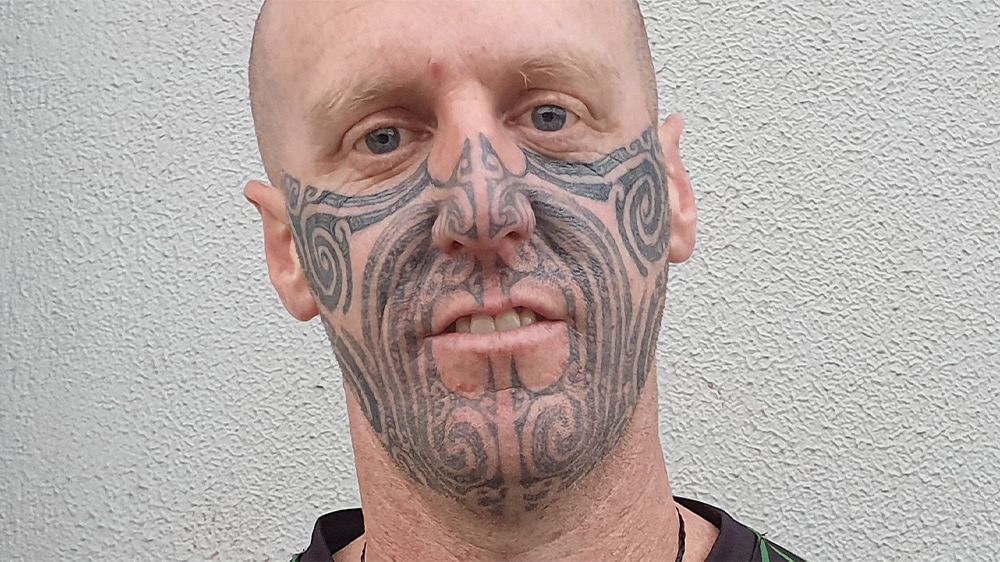 Gary Harding, whose mother was Maori, said his ta moko tells the story of his ancestors and his role as family spokesman and teacher of Maori youth. [David Mullins/Al Jazeera]

By the 1970s, Maori language and arts began experiencing a resurgence but many Maori gangs adopted the ta moko as part of their insignia.

Many young people join criminal groups because they feel disconnected from their Indigenous heritage and are searching for something to make that connection, but end up in the wrong place, he said.

With young offenders, he strives to instil pride in their ancestry and a sense of self.

"There's a clear difference between a gang tattoo - that might be designed to be intimidating - and cultural markings," Harding told Al Jazeera.

A few months ago, when he arrived for a meeting with fellow coaches in the Australian city of Melbourne, Harding said he was refused entry at a restaurant amid snide comments.

Non-Maori often do not understand the tattoos' importance.

"People like myself have to go through these scenarios so society can become more aware," he said, adding that his attempts to explain the cultural significance of his facial tattoos were met by more "ignorant" remarks from the restaurant worker.

"People can walk around in a burka or their cultural dress," he said. "What's the difference between me walking into a place and wearing my culture on my face?"

Harding was one of the first people in public service to wear facial tattoos. 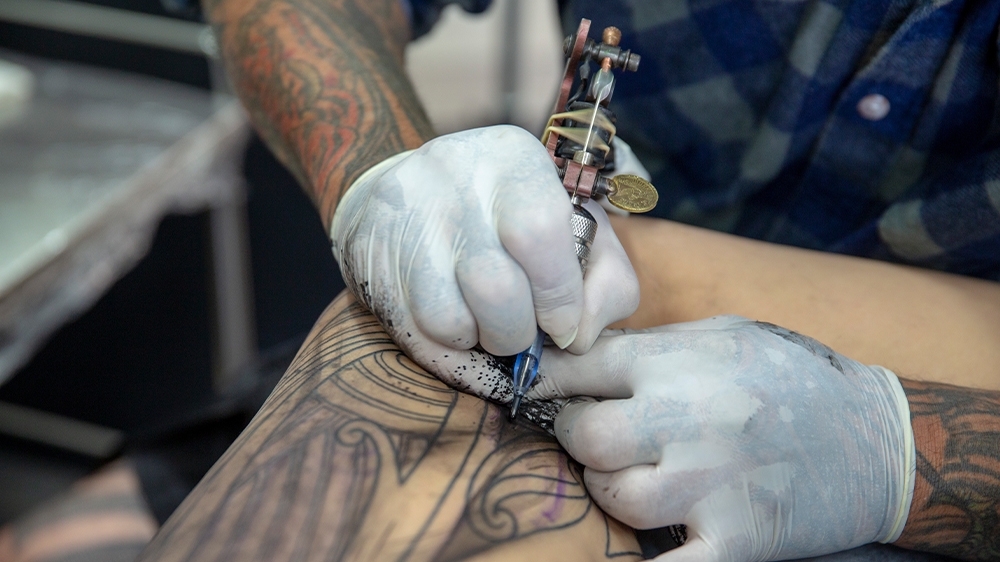 After the colonisation of New Zealand began in 1840, western tattoo methods were introduced to create ta moko. [Tracey Shelton/Al Jazeera]

After his mother died in 2016, he went to his employer - the New Zealand government's child protection service - and told them that on the following Monday he would be arriving with a full facial design.

"I sat down with my boss and explained the importance to me, my mother and my family," he said. "I didn't ask: I told them this is what's happening and they accepted it. It was a big step."

In September, Air New Zealand changed its policies to allow all staff including cabin crew, to display the ta moko.

"It reinforces our position at the forefront of the airline industry in embracing diversity and enabling employees to express individuality or cultural heritage," said the airline's former Chief Executive Officer Christopher Luxon in a statement.

It's our birthright - our identity. I'm not gonna let anybody tell me how to be Maori.

Rawiri Barriball changed the face of the country's military in 2017 when he was granted permission to become the first naval officer to receive his facial markings.

Women have also blazed a trail towards renewed acceptance of the kauae.

Harding's mother, a well-respected school teacher, wore her kauae proudly, long before it was common or widely accepted.

"On her deathbed, she asked me to receive mine - passing the mantle of bearing the family's history," he said.

"It was quite special for me to be able to receive mine from the same artist in the same living room that she received hers and the same place where she passed away. It was very spiritual." 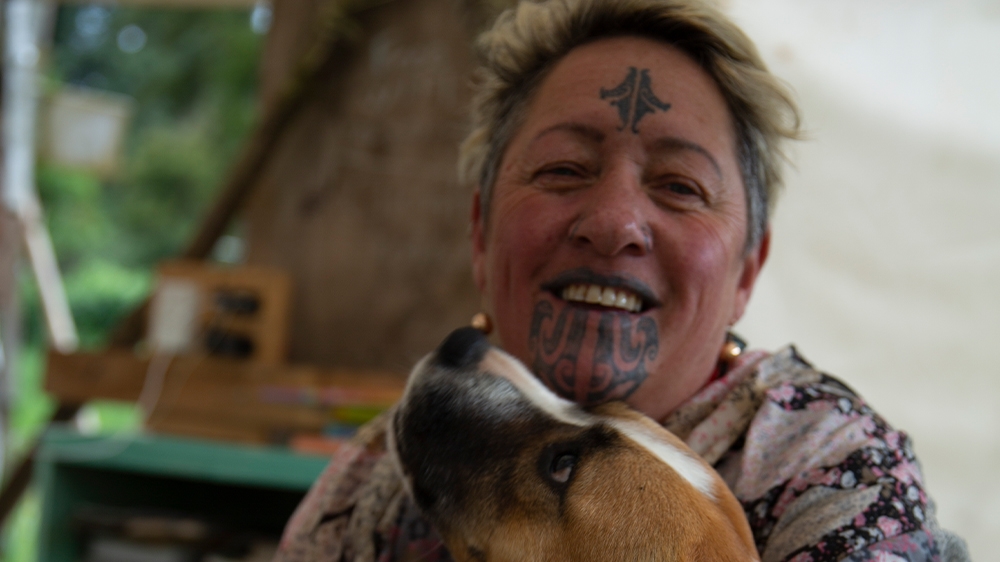 Lisa Isherwood says her ta moko shows she is the first-born, a worker of the land and trained in Maori weaponry [Tracey Shelton/Al Jazeera]

Lisa Isherwood, who runs a sustainable farming project in Turangi a town on the North Island, was one of the first in her family to receive a ta moko and her children have followed in her path.

"It's our birthright - our identity," she said, adding she faced much opposition even from within her family.

"I'm not gonna let anybody tell me how to be Maori."

She explained the meaning of each design.

"This shows I am the first-born and a worker of the land," she said. Another symbol resembling a hammerhead shark signifies her training in Maori weaponry.

She now plans to receive a skin carving as her ancestors once did.

Clyde Peri has been a ta moko artist since 1996.

He first learned Maori wood carving and was later accepted for training in ta moko techniques.

"Every piece starts with a prayer to connect with the ancestors and ask for their blessing and guidance - the designs come from them," he told Al Jazeera.

This is followed by a conversation about the person's life story, achievements, bloodline and what has inspired them to receive the ta moko.

"I'm like a medium - they are already wearing their story," he said as he worked on a piece at the Tatt Datt studio in Melbourne. "I just need to make it visible. It's a spiritual connection."

Ta moko is always drawn freehand, and Peri said he does this while speaking to the person so he can draw from their emotion and energy.

Peri's ancestors were also ta moko artists. On the wall is a picture of one of his forefathers who used the ancient skin carving technique rather than needles. Deep grooves form a tribal pattern on the man's face.

Peri, who has lived in Melbourne for 21 years said most of his customers are from the city's large Maori community.

But some non-Maori also request Peri's designs - a practice that has been met with controversy over the years.

"The meaning is the same to me," Peri said. "I use the chance to educate them about what it means."

British singer Robbie Williams was one of the first to receive a Maori tattoo design from a tribal elder who supported his request.

Peri uses the same process, asking the client about the loved ones they want to represent and their own life journey.

But facial ta moko remain the most sacred and are usually received later in life.

Makere Kupenga, 30, wears a large ta moko representing her mother and sisters on her back. She also has smaller designs behind her ears, but no kauae on her chin and lips.

"It is a heavy weight to carry my family's full whakapapa history," she said. "But I will receive the kauae when I feel I am ready and worthy."