Gulf of Alaska fishery to close for the first time ever

No more cod: Salmon all but gone: Millions of small sea birds died since 2015

Extremely low cod numbers have lead feds to close the Gulf of Alaska fishery for the first time ever. In an unprecedented response to historically low numbers of Pacific cod, the federal cod fishery in the Gulf of Alaska is closing for the 2020 season. It’s a decision that came as little surprise, but it’s the first time the fishery was closed due to concerns of low stock.

“We’re on the knife’s edge of this over-fished status,” North Pacific Fisheries Management Council member Nicole Kimball said during talks in Anchorage Friday afternoon. It’s not over-fishing to blame for the die-off, but rather, climate change. Warming ocean temperatures linked to climate change are wreaking havoc on a number of Alaska’s fisheries, worrying biologists, locals and fishermen with low returns that jeopardize fishing livelihoods.

A stock assessment this fall put Gulf cod populations at a historic low, with “next to no” new eggs, according to NOAA research biologist Steve Barbeaux, who authored the report.

Up until the emergence of a marine heatwave known as “the blob” in 2014, Gulf cod was doing well. But the heatwave caused ocean temperatures to rise 4-5 degrees. Young cod started dying off, scientists said. “A lot of the impact on the population was due to that first heatwave that we haven’t recovered from,” Barbeaux said during an interview last month. Following the first heatwave, cod numbers crashed by more than half, from 113,830 metric tons in 2014 to 46,080 (a loss of almost 68,000) metric tons in 2017. The decline was steady from there. AK

Last month The Big Wobble reported more misery for Alaskan pink salmon fisheries. Prince William Sound Science Center field season was marked by a low flow and high pre-spawn mortality. This year, virtually no rain led to extremely low flows and field crews observed unprecedented pre-spawning die-offs and unusually late migration into the streams. According to the Prince William Sound Science Center, the fish finally started, what was for many, an ill-fated journey into the streams after some rain in early September. The rain stopped and the rivers dried up again. Soon thousands of fish were restricted to tide pools without enough water to return to the bays. They all suffocated. “During the first 10 days of September, our dead fish count in one of our streams rose from virtually none to nearly 30,000 dead pink salmon, all dying prior to spawning”. “Our field crews estimated 10,000 died over a single night. We have never documented anything like that in the past.”

In November 2019, thousands of short-tailed shearwaters birds migrating from Alaska were washing up dead on Sydney's iconic beaches and the bird deaths had nothing to do with the massive wildfires in the area, thousands more, short-tailed shearwaters were dying out at sea, in what was confirmation of the incredible fish shortages in the Pacific Ocean. The corpses had been spotted at several shorelines including Bondi, Manly and Cronulla. The birds were migrating back to southern Australia to breed after spending the summer in Alaska. But, according to experts, a higher number than usual are dying on the way due to a lack of food. The birds need to be at full strength to make the 14,000km trip over the Pacific but the krill and other fish they feed on have apparently dwindled due to sea temperatures rising.

BirdLife Australia has rendered the problem a 'crisis'. In a statement on its website, the group says: 'For the fifth consecutive year, the sea surface temperatures off Alaska have been unusually warm, which has led to a dire shortage of the shearwaters' marine prey, resulting in thousands of dead shearwaters being washed ashore along Alaska's beaches. 'According to the U.S. Fish and Wildlife Service, they died of starvation. 'It wasn't a single event, though; instead, it was a series of catastrophic die-offs. 'Starting in late June, these die-offs continued along different sections of the Alaskan coast, occurring progressively further south, through into August. 'Numerous shearwaters also washed up on Russia's Chukotka Peninsula as well. 'Although many thousands of birds were found dead and dying on the beach, this is likely the tip of the iceberg.' 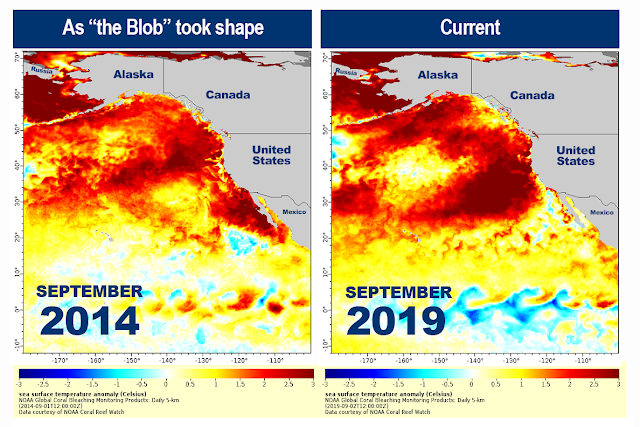 The Pacific Blob has returned and is causing havoc for marine life. Credit NOAA.

It is the tip of the iceberg!

In May 2019, the U.S. Fish and Wildlife Service (USFWS) and the National Park Service (NPS) began receiving reports of dead and dying seabirds from the northern Bering and Chukchi seas, including near Bering Land Bridge National Preserve.

From late June to early August, thousands of Short-tailed Shearwaters were reported dead and washing up on beaches in the Bristol Bay region, or observed weak and attempting to feed on salmon gillnets in inland waters (TBW Quote: most of the salmon had died prior to spawning). By mid-August, the shearwater die-off had extended north, in smaller numbers but widespread locations, into the northern Bering and Chukchi seas along the coasts of Alaska and the Chukotka Peninsula of Russia. Puffins, murres, and auklets were also being reported, but at much lower numbers than shearwaters. Additionally, live Short-tailed Shearwaters have been observed in large numbers this August in the Gulf of Alaska, along the coasts of Glacier Bay and Kenai Fjords national parks, and bays of Kodiak Island. It is unusual to see this species in high abundance in these areas, as it is typically offshore and comes from the southern hemisphere to forage in the Bering and Chukchi seas during the summer and fall.

Historically, seabird die-offs have occurred occasionally in Alaska; however, large die-off events are now occurring each year since 2015. (TBW Quote: millions of small sea birds have been reported dead since 2015, this year it's Short-tailed Shearwaters but recent years have seen puffins, murres, and auklets dying thought to be due to starvation).

Consistently, dead birds examined from the Bering and Chukchi seas during these recent die-offs were determined to have died due to starvation. Seabird carcasses from the 2019 die-off events were collected from multiple locations and sent to the U.S. Geological Survey (USGS) National Wildlife Health Center for examination and testing. Initial results indicate starvation as the cause of death for most locations. However, in southeast Alaska, exposure to saxitoxin (a biotoxin associated with paralytic shellfish poisoning) was linked in June to a localized die-off of breeding Arctic Terns.

The Big Wobble has been reporting an unprecedented seabird die-off in Alaska and Canada since 2015. Climate change is considered by scientists as a significant contributor to seabird declines with reports of British species such as terns and kittiwakes facing an uncertain future as sea temperatures rise. Puffins, in particular, have suffered enormous losses in recent years and a report from the International Union for Conservation of Nature in April warned the iconic species was at risk of extinction. Thousands of dead seabirds have been found washed ashore on sites from islands in the Bering Sea to villages north of the Bering Strait, signs of another large die-off in the warmed-up waters of the North Pacific Ocean. (The actual numbers will be in the millions as most will die at sea.) The dead birds are mostly northern fulmars and short-tailed shearwaters, species that migrate long distances to spend summers in waters off Alaska and other northern regions, the U.S. Fish and Wildlife Service reported. Also in the mix are some kittiwakes, murres and auklets, the federal agency said.

The cause is being investigated. Necropsies so far show that the birds are emaciated - with no food in their stomachs or intestines and little or no fat on their bodies. "Right now, we know that they are starving to death and can't hold their heads above water, and they're drowning," said Ken Stenek, a teacher in Shishmaref and volunteer in a program that monitors seabirds.

The precise toll is unclear. The new die-off follows a massive loss of common murres in 2015 and 2016, 2017 and 2018, the biggest murre die-off on record in Alaska, and a precursor to near-total reproductive failures for murres in the Gulf of Alaska and Bering. It also follows the deaths of thousands of puffins found last fall on St. Paul Island in the Pribilofs and, prior to that, mass deaths of murres and auklets along the U.S. West Coast. In each death wave, starving birds have left emaciated carcasses, and each wave has been associated with unusually warm marine waters.