'We Are Unstoppable, Another World Is Possible!': Young Climate Activists Storm COP 25 Stage

Protesters demand world leaders at the global climate summit urgent address the planetary emergency - and were thrown out of the premises in an unprecedented affront against registered observers.

Young activists shout slogans on stage after Greta Thunberg (not in the picture) took part in the plenary session during the COP25 Climate Conference on December 11, 2019 in Madrid, Spain. The COP25 conference brings together world leaders, climate activists, NGOs, indigenous people and others for two weeks in an effort to focus global policy makers on concrete steps for heading off a further rise in global temperatures.

Young activists took over and occupied the main stage at the COP 25 climate conference in Madrid, Spain Wednesday and demanded world leaders commit to far more ambitious action to address the ecological emergency.

Happening now: Youth activists from all around the world storm the stage at #COP25 to demand real climate action! Dear leaders, your empty words will not solve this crisis. #YourVoteOurFuture pic.twitter.com/4S6ZX8Tt4H

"Nobody has ever done an action like this before," said youth climate striker Dylan Hamilton of Scotland, "the times are changing."

Video posted by Brussels-based climate activist Damien Thomson shows protesters with Fridays for Future walking onto the stage and siting down. The group's chants included, "What do we want? Climate justice. When do we want it? Now!"

They also shouted, "We are unstoppable, another world is possible!"

"World leaders have left us no choice," said 14-year-old Alexandria Villaseñor of New York about the sit-in.

U.N. security threatened to "de-badge" the activists unless they left the stage.

Security is trying to clear the stage at #COP25 but youth from over a dozen countries just started a sit in! pic.twitter.com/yUvpd7OEd2

The action took place after a plenary that included speeches from teen activist and newly-minted Time Person of the Year Greta Thunberg of Sweden and youth climate activist Hilda Flavia Nakabuye of Uganda.

"I am the voice of dying children, misplaced women, and people suffering at the hands of the climate crisis created by rich countries," Nakabuye told the audience.

Reacting to the sit-in, author and climate act Bill McKibben said on Twitter, "Time for negotiators to face the people whose lives they are negotiating away."

Millions of people took to the streets this year to demand climate action. Led by our youth, women, Indigenous Peoples, workers and climate justice movements, all of civil society made our voices heard like never before and awakened the world to the climate emergency.

Now our voices are being silenced. Hundreds of us demonstrated inside the halls of COP25 today in Madrid — not to block progress, but to drive it forward. Our motto was, “Step up, pay up.” It was a message to the rich industrialized countries who refuse to meet their commitments under the Paris Agreement and human rights law to provide finance to support communities suffering from increasingly severe disasters. It was a message to the corporate polluters, who roam these halls attempting to profit from the world’s suffering with their false solutions to climate change rather than making a transition away from a fossil fuel economy and paying for the damage they’ve done.

Instead of kicking out these polluters, the UNFCCC 25th Conferences of the Parties (COP25) kicked out the people. Instead of listening to our voices, they attempted to silence us. We were pushed, bullied, and touched without our consent. We were driven out of the negotiating halls, told that we can take our action outside as they raised an enormous metal door and herded us out. We weren’t advised to the intentions of the UN security to take our badges. We stood out in the cold, many without our jackets and coats as we later watched the  enormous metal door lock us out in the cold. An Indigenous woman was not allowed to go back inside to feed her baby.

This has never happened before in 25 years of negotiations. Yet, there could be no better symbol of this crisis we face. People around the world are crying out for justice, and fighting oppression, while those in power attempt to shut us out. They pay us lip service, thanking us for our action, but when the time comes to act, they slam the door in our face while providing a platform to polluters. The UN and countries want to recognize the traditional knowledge of Indigenous Peoples but chose not to recognize the rights of Indigenous Peoples. It is a pattern that takes place around the world, from Chile to the halls of COP25, to every place where local communities and Indigenous Peoples are fighting for their rights and their future.

We will not back down. We demand full access for civil society, the people of the world, to these negotiations and all international processes. We demand that our voices be heard.

The people united will never be defeated!

Friends of the Earth Bulgaria

Friends of the Earth International

In Madrid Indigenous Protesters and Youth got kicked out 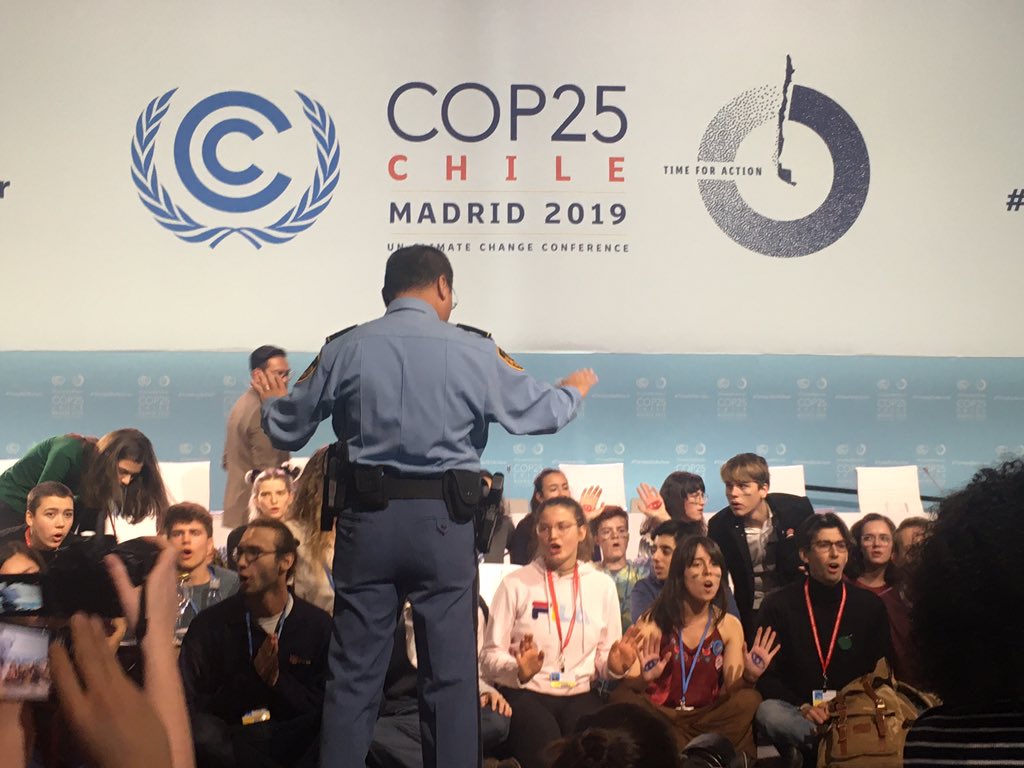 These pictures will go around the world. After chanting for climate justice inside #COP25, young people & indigenous leaders were pushed outside the conference.

Security isolated one woman, then shoved everyone inside a circle. They elbowed people and even sexually touched one, or more, women. Observers were threatened and badges taken away for filming - a taste of what would come, if the UN ever would become the New World regime.

People were bullied & kicked. Then we were kettled on the street & refused to get back in – but we won't be silenced! 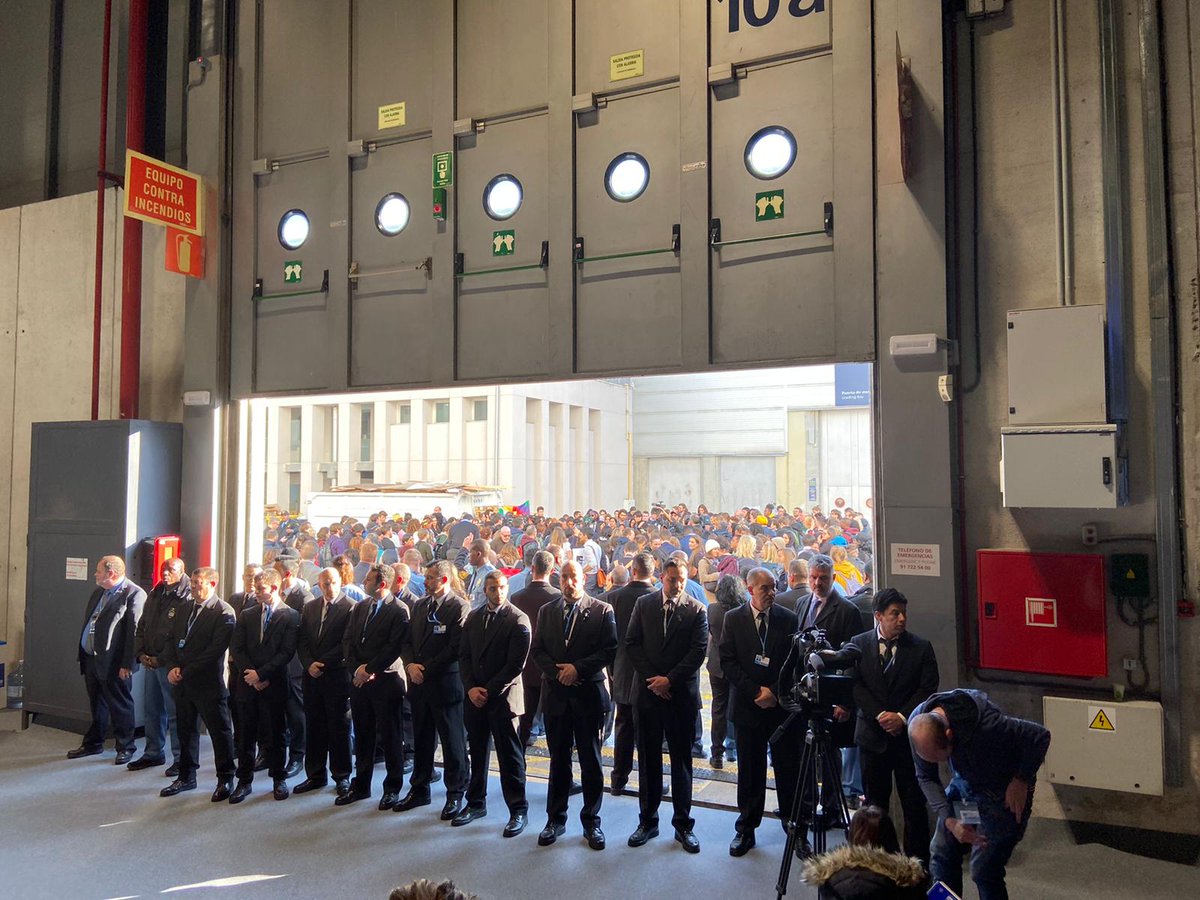 Spanish plaincloth policemen blocked Indigenous people and youth from returning to the venue. This is a picture of the security moving detaining peaceful protesters today at #COP25. Security detained people there for over an hour, there are (not-yet-confirmed) reports of assault, I can testify that there was aggression from security. We won't be silenced. Theo C. Mouze‏ @theocmouze Dec 11 @GretaThunberg

It seems the #COP25 made the most shameful kind of history today: Shortly after welcoming @GretaThunberg to speak, more than 100 climate activists got forcefully thrown out after a peaceful protest. That has never happened before, it’s outrageous. The people won’t be silenced.

What happened today at COP was unacceptable. @UNFCCC has shown it's true colours. Beneath the glamorous exterior and the lofty promises there is an ugly, ugly core. We will hold them to account, and we will get #ClimateJustice! #COP25 @GretaThunberg @Luisamneubauer @saoi4climate 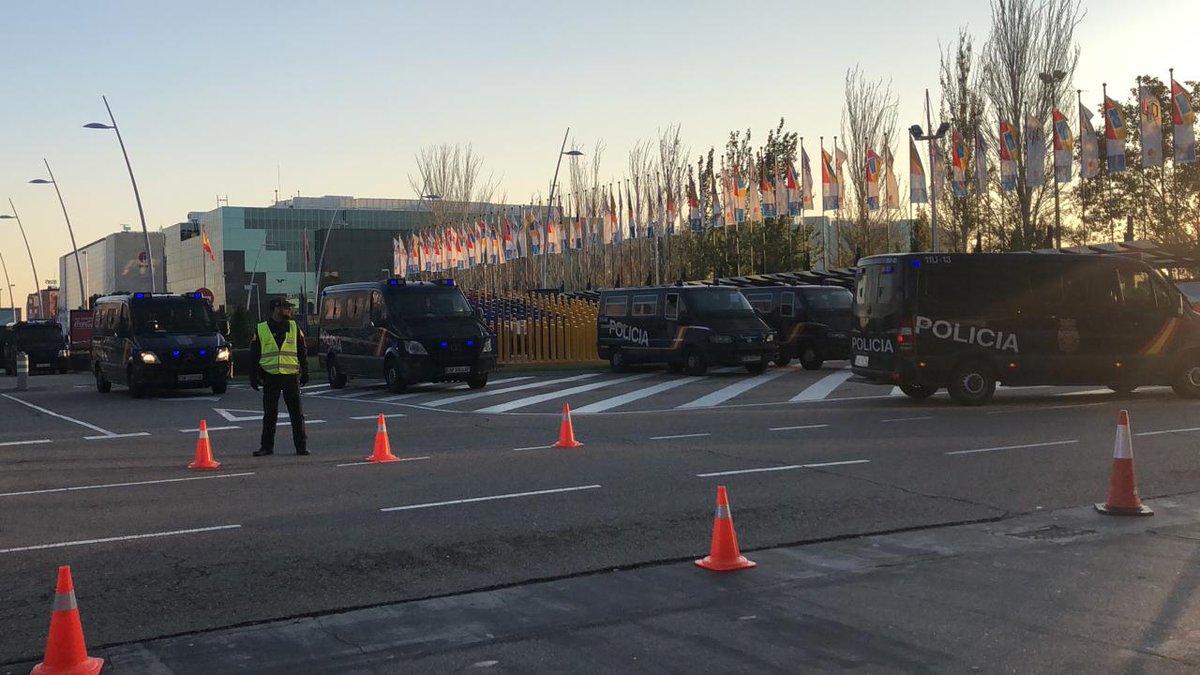 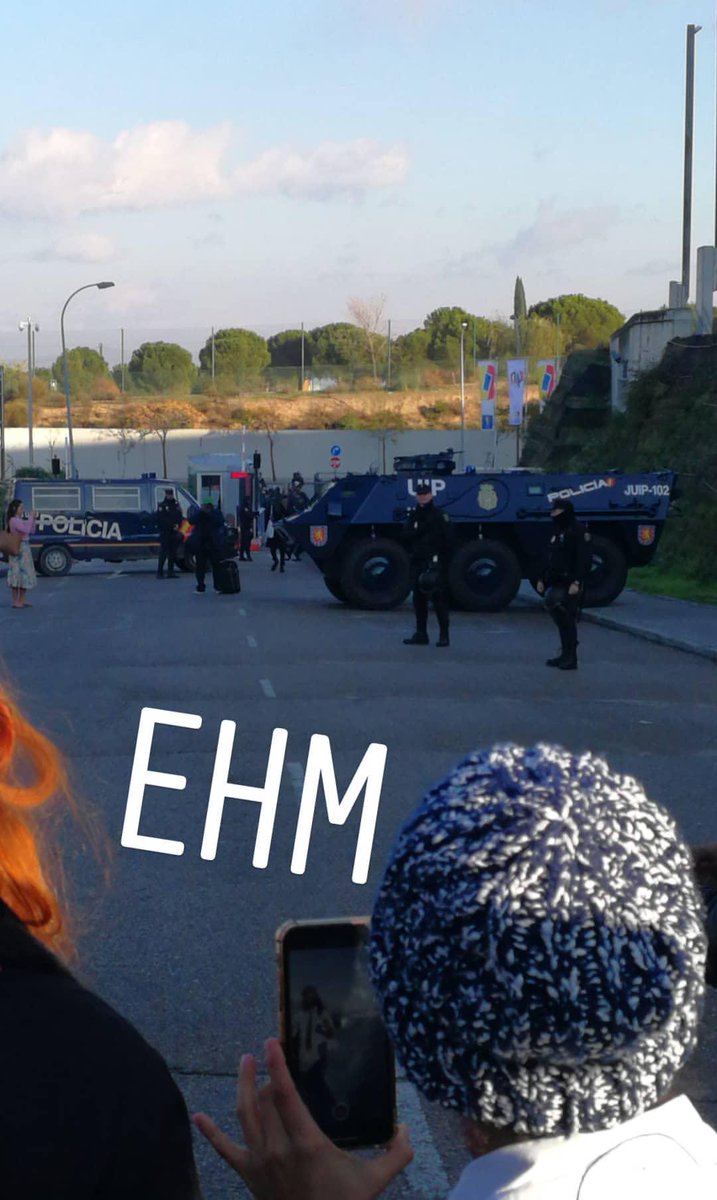 And this is what the mainstream media had to say

At the conclusion of UN climate talks in Madrid, our environment correspondent Matt McGrath considers the key lessons.

COP25 in Madrid only happened because the Chilean government, faced with mounting civil disorder, decided to cancel the meeting in Santiago.

Spain stepped in and in three weeks organised a well-resourced and well-run event.

However, the fact that it was being run by one government, while hosted by another, gave rise to severe difficulties.

Delegates were highly critical of the fact that when it came to the key text about ambition, the Chileans presented the lowest common denominator language first, resulting in a huge number of objections from countries eager to see more ambition on carbon cuts.

Experienced COP watchers said they should have started with high ambition and negotiated down to a compromise.

Insiders say that agreement was only found because of the influence of Spanish minister Teresa Ribera who played a key role in bringing parties together during the long, last night of negotiations.

2. Disconnect is the key word

This was the word that was most widely used to describe COP25.

There was a yawning gap between the demands of those outside the process and the actions of those within.

This disconnect was the difference between the urgency underlined by the latest science, the demands for more ambitious climate targets from school strikers around the world, and the torturous, convoluted nature of the talks.

During the talks, young activists staged an unauthorised protest that saw hundreds ejected by security.

"It's clear that civil society is at a boiling point, they are frustrated with the glacial pace and they are livid with the presence of polluters and their trade associations," said Sriram Madhusoodanan from Corporate Accountability, a campaign group that monitors the presence of the oil and gas industry at COP.

"If these talks are ever going to deliver, governments have to take a long serious look at why its failed for 25 years, and start by kicking polluters out."

This will be the most critical climate encounter in 2020.

The next conference of the parties may be in Glasgow, but the chance of any real success there will be determined, to a large extent by what happens in the EU-China summit taking place in the German city of Leipzig next September.

The hope is that by then the EU will have formalised its zero-carbon long term goal and also updated its 2030 pledge to cut emissions by 55% of 1990 levels.

The EU will likely try and secure agreement from the Chinese to improve their nationally determined contribution (NDC).

Back in 2014 the climate pact signed by President Obama and President Xi Jinping became the lynchpin of the Paris Agreement.

Many observers hope that if the EU and China can do the same, it will be a massive boost for Glasgow.

"The good news is that the Chinese president is coming to the summit," said Li Shuo, a senior policy adviser with Greenpeace China.

"From the Chinese perspective the NDC enhancement decision is one that has to be made at the very top level so the fact the president is going would provide one potential condition for a political level decision."

At Paris in 2015, countries submitted their first climate plans, which was relatively easy for many of the larger developing countries.

But in 2020, they are supposed to do much more and as Madrid proved, many are fighting this hard.

The actions of the US in pulling out of Paris and adopting an antagonistic attitude to the COP have chimed with the desire among some of the larger emitters to put off difficult decisions.

That was clearly evident in Madrid.

So Australia fought hard to keep old carbon credits in the system because it wants to use them to reduce its own carbon rather than taking actions that might impact consumers.

India became much more vocal about the need for an examination of whether richer countries have done enough in the years running up to 2020.

If countries can't be persuaded to move away from these self-protective positions, Glasgow will suffer the same fate as the ill-fated Copenhagen COP in 2009.

5. Glasgow has a mountain to climb

Because Madrid failed to clarify so many key issues the onus now falls on the UK to resolve many of the most challenging questions.

In Glasgow, the question of loss and damage, of carbon markets, transparency and many other technical issues will need to solved.

Most importantly the countries will have to agree a major boost in their carbon cutting if the world is to keep the rise in global temperatures under 1.5C this century.

At a time when the UK will be negotiating trade deals with the EU and with the US, it is going to require enormous diplomatic clout to deal with the climate question as well.

"The diplomacy to build the confidence of the Chinas and the Indias that they can do more and they will be supported, through economic co-operation and that everyone else is moving in that direction, is incredibly important for changing the politics heading into next year," said Jennifer Tollman, a climate expert with the E3G think tank.

"The UK can't do it on its own. They will have to outsource this to people they know and trust."