The Amazon rainforest is in trouble. Again.

This three-part video series looks at the world’s largest rainforest, why it’s in jeopardy, and the people trying to save it.

The largest rainforest in the world is shrinking. Again.

For more than a decade, Brazil successfully fought deforestation in the Amazon. But that didn’t last: In 2019, tens of thousands of man-made fires ravaged the rainforest. Deforestation there reached an 11-year high.

Since far-right president Jair Bolsonaro was elected in October 2018, the Amazon has been put at risk again. The new president has weakened environmental protections, and he’s encouraged cattle ranchers, loggers, and farmers to expand their businesses by clearing new land in the Amazon. 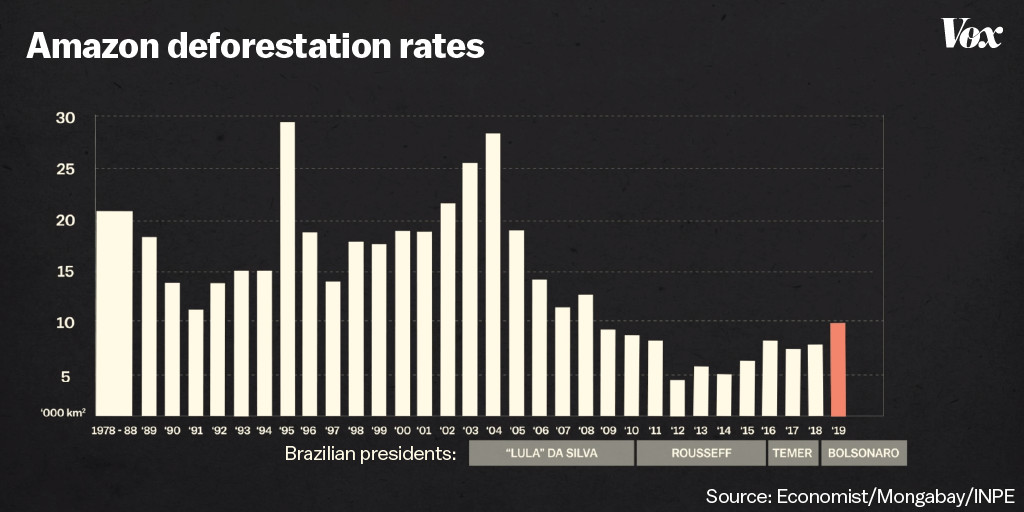 Today, the Amazon is entering a new and dangerous phase of deforestation. In this video series, learn about why the Amazon is in jeopardy again, and meet the people who have led the fight to save it.

The destruction of the Amazon, explained

In the 2000s, Brazil made a plan to protect the Amazon from being destroyed, and it worked. But then that plan fell apart. And today, the Amazon is being burned again. So what’s driving the deforestation today? And why did the plan fail?

The war for the Amazon’s most valuable trees

In the 1970s, deforestation in the rainforest took off. When the world learned about it and the fight to protect the Amazon went global, it was largely because of a man who tapped rubber trees. Chico Mendes was one of many rubber tappers who lived in the rainforest sustainably, and his protest movement started as a campaign to protect the rubber trees and his fellow rubber tappers. But it turned into the first big fight to save the Amazon itself.

Brazil’s indigenous lands are being invaded

Brazil’s indigenous people have been persecuted for centuries. But in the 1980s, they finally got protections that guaranteed their rights, and their homes, in the Amazon. Today, that’s being put in jeopardy by an agriculture industry looking to expand into indigenous lands, and a president who isn’t willing to stop them.

I was not really paying attention to the fires in the Amazon until my daughter's high school volleyball coach Jason Berube, who is also a world history teacher at Dacula High School, asked me about it. This year has already presented the unusual circumstance that much of the Arctic region is on fire. Record heat in parts of Alaska, Greenland, and Russia have converted a region associated with icy tundra to an inferno.

The Amazon rainforest in vast parts of South America is literally on fire. The Brazilian Space Agency released data suggesting that current wildfire activity in the Brazilian Amazon is unusual in comparison to much of the recent decade and most experts agree. Why does that matter to you and me?

I address questions like that because people are often very "local" in the way that they think. If it is cold where they live for a season, global climate change is not happening. It probably doesn't cross the average person's mind that abnormally warm ocean temperatures in the Pacific Ocean (El Nino) can affect their weather or even production of food that they eat. Many people probably don't notice that gas prices often spike after a hurricane moves through the Gulf of Mexico because of reduction in supply from oil rigs. It's not that I have psychic powers, but I bet you that the importance of the Amazon rainforest is not a daily topic at most dinner tables.

NASA issued a press release this week about wildfires in Amazonia and the associated smoke. The U.S. space agency (and my former employer) noted:

According to Brazil’s space research center INPE almost 73,000 fires have been recorded so far this year. INPE is seeing an 83% increase over the same period in 2018.

Wildfires are a natural occurrence during the dry season in Brazil. Rhett Butler is a writer at the Rainforests.mongabay.com website. He wrote in 2012 on the website:

Low-level fires in the rainforest are not unusual. Even in "virgin" forests, fires may burn across thousands of acres of forest during dry years. The distinction between these fires and the fires that forests are increasingly experiencing today is the frequency of occurrence and level of intensity. Natural fires in the Amazon generally do little more than burn dry leaf litter and small seedlings. Typically these fires have flames that only reach a few inches in height and have virtually no impact on tall trees or the canopy itself.

The problem with the current fires is that many experts suspect that they are not natural fires. National Geographic Explorer-at-Large and ecologist Thomas Lovejoy told Sarah Gibbens in a NationalGeographic.com article this week.

This is without any question one of only two times that there have been fires like this,” in the Amazon...There’s no question that it’s a consequence of the recent uptick in deforestation

Numerous scholars concur that a surge in deforestation is likely to blame. Experts believe that intensive agricultural and related practices in the region have led to an uptick in deforestation in recent months as documented by the Brazilian Space Agency. The newly elected President of Brazil (and not a ecologist as far as I know) denied his own science agency's data about deforestation and the head of the agency was fired. I wrote previously in Forbes about the relative changes in deforestation in Brazil.

Ok, so what? Why does this all matter to you and me? There are so many answers to that question that I cannot do them justice in this limited space. I point you to an excellent resource by the World Wildlife Federation (WWF). However, the significance definitely transcends wildlife. Here is a synopsis of reasons listed by WWF:

There are numerous other benefits of rainforests related to biodiversity, fire control (supposedly), water resources, transportation, and pollution. However, one of the most important "so what's," in my view, is the encroachment of politics and ideology into an ecosystem that is so vital to the world. Keep an eye on that.

Dr. J. Marshall Shepherd, a leading international expert in weather and climate, was the 2013 President of American Meteorological Society (AMS) and is Director of the University of Georgia’s (UGA) Atmospheric Sciences Program. Dr. Shepherd is the Georgia Athletic Association Distinguished Professor and hosts The Weather Channel’s Weather Geeks Podcast, which can be found at all podcast outlets. Prior to UGA, Dr. Shepherd spent 12 years as a Research Meteorologist at NASA-Goddard Space Flight Center and was Deputy Project Scientist for the Global Precipitation Measurement (GPM) mission. In 2004, he was honored at the White House with a prestigious PECASE award. He also has received major honors from the American Meteorological Society, American Association of Geographers, and the Captain Planet Foundation. Shepherd is frequently sought as an expert on weather and climate by major media outlets, the White House, and Congress. He has over 80 peer-reviewed scholarly publications and numerous editorials. Dr. Shepherd received his B.S., M.S. and PhD in physical meteorology from Florida State University.