The Seven Fires Prophecy of the Anishnabe is spiritually encoded in the Wampum Belt.

The belt is sewn with thousands of tiny, polished, cylindrical purple and white sea shell beads woven together with leather strips.

This Wampum Belt has been handed down among the Algonquin for hundreds of years. It has seven Diamonds which represent the Seven Fires.

Grandfather Commanda and other Traditional Leaders believe that we have entered the time of the Seventh Fire, which is the time of decision between the two roads of materialism and of spirituality.

VENICE, CALIFORNIA, JAN (IPS) - ''You cannot deal with the future unless you also come to terms with the past.'' US Ambassador to the United Nations Richard Holbrooke intended these words for his Indonesian hosts before his visit last November to East Timor. But they could as easily pertain to the obligations of the US and other Western countries toward the soon-to-be independent East Timor.

Without a doubt Holbrooke's call for accountability was appropriately levelled at Jakarta. The Indonesian military and its paramilitary allies devastated East Timor in September in the aftermath of the United Nations-run vote on the territory's political future, destroying the vast majority of the country's buildings and infrastructure, and killing untold numbers.

And although the United Nations has assumed political and military control of the territory, many problems remain. As Human Rights Watch reported in mid-December, for example, upwards of 110,000 East Timorese remain virtual prisoners in paramilitary- controlled camps in Indonesian West Timor. The recent discovery of two more mass graves in East Timor only serves to reinforce the importance of Holbrooke's message.

Bougainville - The long struggle for freedom

This article was first presented by Moses and Rikha Havini to the UN International Conference on Indigenous Peoples, Environment and Development, Zurich, 1995. It has been sub-edited and slightly abridged with the approval of the authors.

Young freedom fighter from the Bougainville Revolutionary Army
with home made shotgun stands guard over the Panguna copper mine.
photo: Francis O'Neill, April 1994

ECOTERRA Intl. spoke with a source, who stated: "Klaus confided to me in March 1994 that he had observed large movements of weapons and ammunitions and Tutsi looking soldiers crossing from Uganda through Mga Hinga National Park into Rwanda. Klaus knew that 'they' didn't want him there and feared for his life, but he had dedicated his work to the protection of the gorillas and their habitat and said he wouldn't give up. He had reached out to other international protection ecologists, because his German sponsors were suddenly pulling the plug, and one of them was subjected to three assassination attempts in Uganda in the months before Klaus was hit. Luckily that other nature defender could escape - injured but alive. Klaus was not fighting against the indigenous Twa people, whose biggest oppressor are cruel racist circles in the government of Uganda, where a minister publicly stated that the Twa are of less value than any wildlife - Klaus resisted against the USAmerican agents and their machinations, who worked with these Ugandans under President Museveni, himself a Tutsi, who allowed the Americans to train and equip Tutsi commandoes inside Uganda and to deploy them across the border prior to the genocide."

On 6 April 1994, an aeroplane carrying Rwanda's President Habyarimana and Burundian President Cyprien Ntaryamira, both Hutu, was shot down on its descent into Kigali. Genocidal killings began the following day. Soldiers, police, and militia quickly executed key Tutsi and moderate Hutu military and political leaders who could have assumed control. From 7 April to mid-July 1994 up to around 1,000,000 Rwandans, including 10,000 of the persisting population of 30,000 Twa forest people, were killed and since then the Tutsi are in power.

And in Uganda the Gorillas left Magahinga in 2011.

For a Fist Full of Dollars ... the Mysterious Death of the Gorilla Conservationist Klaus-Jürgen Sucker

"Although this final report should be viewed with consideration to the fact that my involvement in the MGNP (Mgahinga Gorilla National Park) was prematurely terminated, the goals of the project, i.e. to establish a functioning national park and to improve the protection of the local flora and fauna, were successfully met. To install another person to continue the project is unrealistic and of high risk, particularly in view of the possible motives for my transfer. Unfortunately, the remaining time available to me before my transfer on August 1, 1994, does not permit me to travel to Germany right now to personally inform you of the current situation. I will undertake everything in my power to personally get in touch with you as soon as possible."

These are Klaus-Jürgen Sucker's concluding lines in his final letter to the Deutscher Tierschutzbund dated June 15. The letter arrived after his death.

On The Death of Klaus-Jürgen Sucker

In the 1/94 issue of the Gorilla Journal, we already relayed the sad news of the death of Klaus- Jürgen Sucker, the leader of the Mgahinga Gorilla National Park Project and long-standing member of Bergorilla & Regenwald Direkthilfe (BRD). The following report gives an overview of Klaus-Jürgen Sucker's life and work, which he devoted to the mountain gorillas and their environment, and examines the facts so far known to us concerning his as yet unexplained death.

On 20 June 1994 Klaus-Jürgen Sucker was found strangled in his house in Kisoro by his housekeeper. The 37-year-old leader of the Mgahinga Gorilla National Park Project in Uganda, which was created by the BRD and the Deutscher Tierschutzbund (German Animal Protection Society), was dead. The authorities gave suicide as the cause of death. However, there are many indications that Klaus-Jürgen Sucker was the victim of a crime. As a dedicated conservationist, he had many enemies, ranging from poachers and smugglers to the leaders of a developmental aid project who wanted to establish sustainable use projects in this small national park. With Klaus-Jürgen, they were dealing with someone whose first priority was the protection and conservation of fauna and flora and who acted accordingly.

Read more: On The Death of Klaus-Jürgen Sucker

Everyone can carry this AquaCard and if raised, it signals to the aggressor:

"Halt, Stop right now with anything you do to me, because you are violating my universally guaranteed rights!"

WAR is a Racket

WAR is a racket. It always has been.

TO HELL WITH WAR!

It is possibly the oldest, easily the most profitable, surely the most vicious racket. It is the only one international in scope.

It is the only one in which the profits are reckoned in dollars and the losses in lives.

A racket is best described, I believe, as something that is not what it seems to the majority of the people.

Only a small 'inside' group knows what it is about.

It is conducted for the benefit of the very few, at the expense of the very many. Out of war a few people make huge fortunes.

Read more: WAR is a Racket

CELEBRATE YOUR LIFE BY PLANTING TREES!

Use these occasions as opportunities, whereby you can do something very important, for you and for Earth.

No matter if you celebrate your 70th birthday, 50 years work anniversary or 30 years of marriage - use that event to plant trees.

Get together with other people to enhance your effort.

How many trees will that be?

That is easy to calculate:

The U.S. Massacre at My Lai

US War Crimes: The Massacre at My Lai 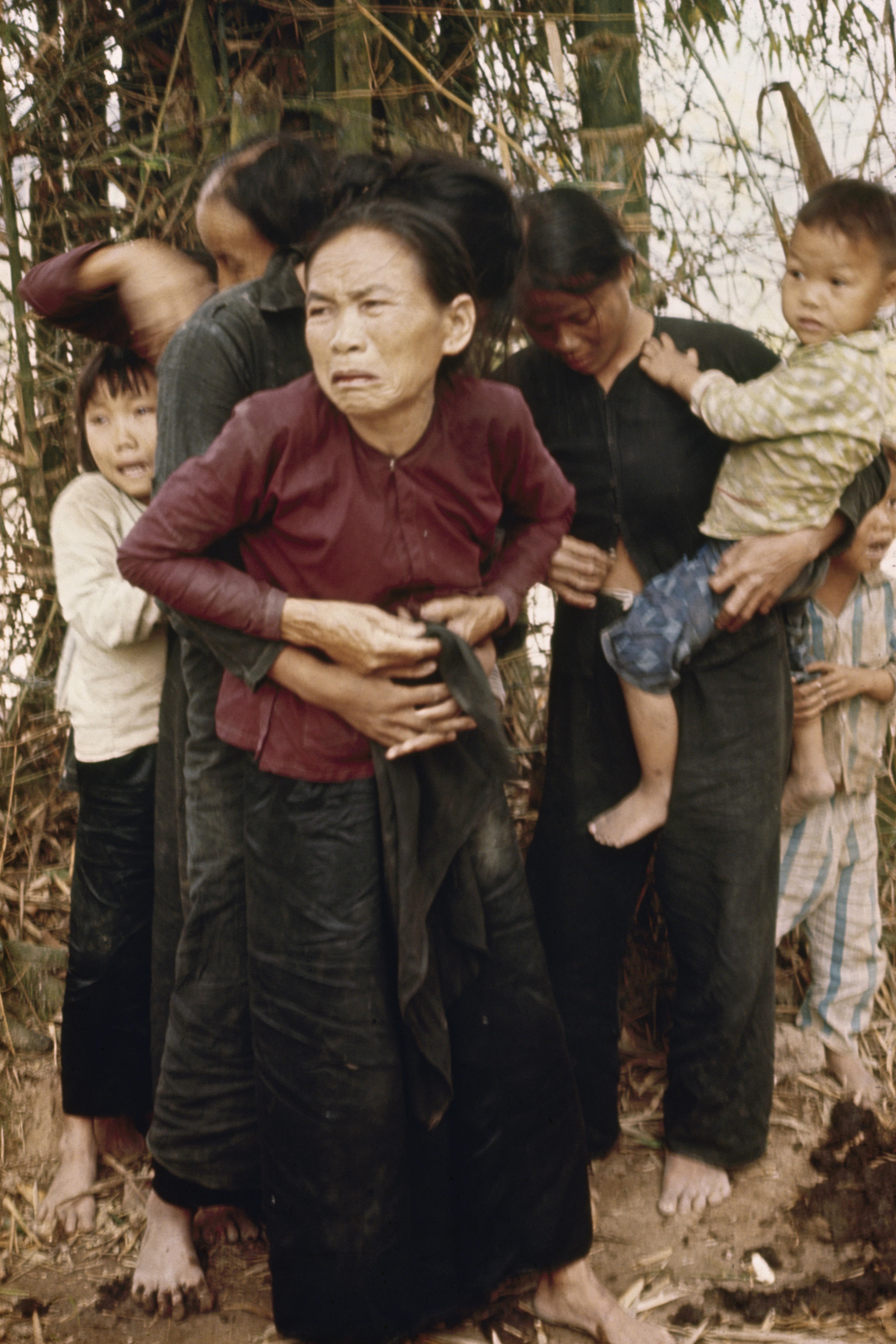 Early on March 16, 1968, a company of soldiers in the United States Army’s Americal Division were dropped in by helicopter for an assault against a hamlet known as My Lai 4, in the bitterly contested province of Quang Ngai, on the northeastern coast of South Vietnam. A hundred G.I.s and officers stormed the hamlet in military-textbook style, advancing by platoons; the troops expected to engage the Vietcong Local Force 48th Battalion—one of the enemy’s most successful units—but instead they found women, children, and old men, many of them still cooking their breakfast rice over outdoor fires. During the next few hours, the civilians were murdered. Many were rounded up in small groups and shot, others were flung into a drainage ditch at one edge of the hamlet and shot, and many more were shot at random in or near their homes. Some of the younger women and girls were raped and then murdered. After the shootings, the G.I.s systematically burned each home, destroyed the livestock and food, and fouled the area’s drinking supplies. None of this was officially told by Charlie Company to its task-force headquarters; instead, a claim that a hundred and twenty-eight Vietcong were killed and three weapons were captured eventually emerged from the task force and worked its way up to the highest American headquarters, in Saigon. There it was reported to the world’s press as a significant victory.

The G.I.s mainly kept to themselves what they had done, but there had been other witnesses to the atrocity—American helicopter pilots and Vietnamese civilians. The first investigations of the My Lai case, made by some of the officers involved, concluded (erroneously) that twenty civilians had inadvertently been killed by artillery and by heavy cross fire between American and Vietcong units during the battle.

Read more: The U.S. Massacre at My Lai