Sea level has been rising over the past century, and the rate has increased in recent decades. In 2018, global mean sea level was 3.2 inches (81 millimeters) above the 1993 average—the highest annual average in the satellite record (1993-present). It was the seventh consecutive year, and the 23nd out of the last 25 years in which global mean sea level increased relative to the previous year.

Since the start of the satellite sea level record in 1993, the average rate of sea level has been about one-eighth of an inch (3.1 mm) per year. The rising water level is mostly due to a combination of meltwater from glaciers and ice sheets and thermal expansion of seawater as it warms. 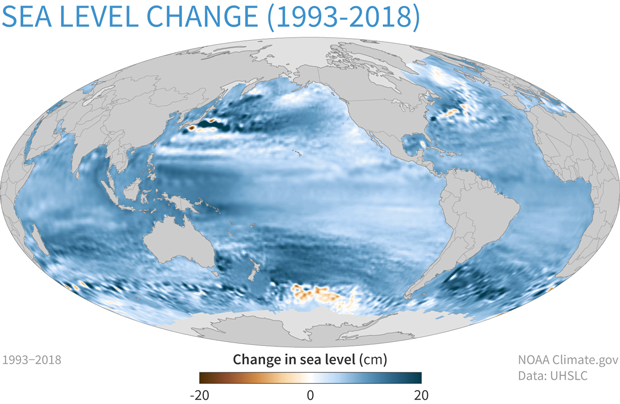 Change in ocean water levels from 1993–2018, based on satellite altimeter data provided by Philip Thompson, University of Hawaii. On average, the global ocean has risen just over 3 inches since 1993, according to the State of the Climate 2018 report.

The light blue line shows seasonal (3-month) sea level estimates from Church and White (2011). The darker line is based on University of Hawaii Fast Delivery sea level data. For more detail on the data sources, see the end of the article.

In the United States, almost 40 percent of the population lives in relatively high population-density coastal areas, where sea level plays a role in flooding, shoreline erosion, and hazards from storms. Globally, 8 of the world’s 10 largest cities are near a coast, according to the U.N. Atlas of the Oceans.

South Beach, Miami on May 3, 2007. Photo by Flickr user James WIlliamor, via a Creative Commons license.

In the natural world, rising sea level creates stress on coastal ecosystems that provide recreation, protection from storms, and habitat for fish and wildlife, including commercially valuable fisheries. As seas rise, saltwater is also intruding into freshwater aquifers, many of which sustain municipal and agricultural water supplies and natural ecosystems.

Sea level is rising for two main reasons: glaciers and ice sheets are melting and adding water to the ocean and the volume of the ocean is expanding as the water warms. A third, much smaller contributor to sea level rise is a decline in water storage on land—aquifers, lakes and reservoirs, rivers, soil moisture—mostly as a result of groundwater pumping, which has shifted water from aquifers to the ocean.

Melt streams on the Greenland Ice Sheet on July 19, 2015. Ice loss from the Greenland and Antarctic Ice Sheets as well as alpine glaciers has accelerated in recent decades. NASA photo by Maria-José Viñas.

The pace of global sea level rise nearly doubled from 1.7 mm/year throughout most of the twentieth century to 3.1 mm/year since 1993.

Sea level rise at specific locations may be more or less than the global average due to local factors: subsidence, upstream flood control, erosion, regional ocean currents, and whether the land is still rebounding from the compressive weight of Ice Age glaciers.

Sea level is measured by two main methods: tide gauges and satellite laser altimeters. Tide gauge stations from around the world have measured the daily high and low tides for more than a century, using a variety of manual and automatic sensors. Using data from scores of stations around the world, scientists can calculate a global average and adjust it for seasonal differences.

Since the early 1990s, sea level has been measured from space using laser altimeters, which determine the height of the sea surface by measuring the return speed and intensity of a laser pulse directed at the ocean. The higher the sea level, the faster and stronger the return signal is.

To estimate how much of the observed sea level rise is due to thermal expansion, scientists measure sea surface temperature using moored and drifting buoys, satellites, and water samples collected by ships. Temperatures in the upper half of the ocean volume are measured by a global fleet of aquatic robots.

Observed sea level since the start of the satellite altimeter record in 1993 (black line), plus independent estimates of the different contributions to sea level rise: thermal expansion (red) and added water, mostly due to glacier melt (blue). Added together (purple line), these separate estimates match the observed sea level very well. NOAA Climate.gov graphic, adapted from Figure 3.15a in State of the Climate in 2018.

To estimate how much of the increase in sea level is due to actual mass transfer—the movement of water from land to ocean—scientists rely on a combination of direct measurements of melt rate and glacier elevation made during field surveys, and satellite-based measurements of tiny shifts in Earth’s gravity field. When water shifts from land to ocean, the increase in mass increases the strength of gravity over oceans by a small amount. From these gravity shifts, scientists estimate the amount of added water.

In 2012, at the request of the U.S. Climate Change Science Program, NOAA scientists conducted a review of the research on global sea level rise projections, and concluded that there is very high confidence (greater than 90% chance) that global mean sea level will rise at least 8 inches (0.2 meter) but no more than 6.6 feet (2.0 meters) by 2100.

Do you have feedback to offer on this or another article?
Let us know what you think.

About the data used in the interactive graph

The early part of the time series shown in the graph above comes from the sea level group of CSIRO (Commonwealth Scientific and Industrial Research Organisation), Australia's national science agency. The more recent part of the time series is from the University of Hawaii Sea Level Center. It is based on a weighted average of 373 global tide gauge records collected by the U.S. National Ocean Service, UHSLC, and partner agencies worldwide. The weights for each gauge in the global mean are determined by a cluster analysis that groups gauges from locations where sea level tends to vary in the same way. This prevents over-emphasizing regions where there are many tide gauges located in close proximity. The values are shown as change in sea level in millimeters compared to the 1993-2008 average.

More sea level data and information from NOAA and partners