(Stay online to get the charts and please allow jscript and external links on this page.)

There are currently more than seven and a half billion people on earth, with the UN projecting that number will hit 10 billion by 2056.

At the end of the year the United States is estimated to have a population of over 329 million.

It took 200,000 years for humanity to reach the first billion people, but after that it only took 200 more years to hit seven billion.

In honor of the United Nation's World Population Day, here are five graphics to help you understand how the number of people in the world has grown.

1. This interactive graph shows just how much the world's population accelerated after 1900.

2. This chart shows how different world regions have grown since 1820.

3. This interactive map shows how each country has grown since 1800. Click on a country to see.

4. Despite the boom, the world's growth rate has slowed since its 1962 peak, and looks set to slow even more. 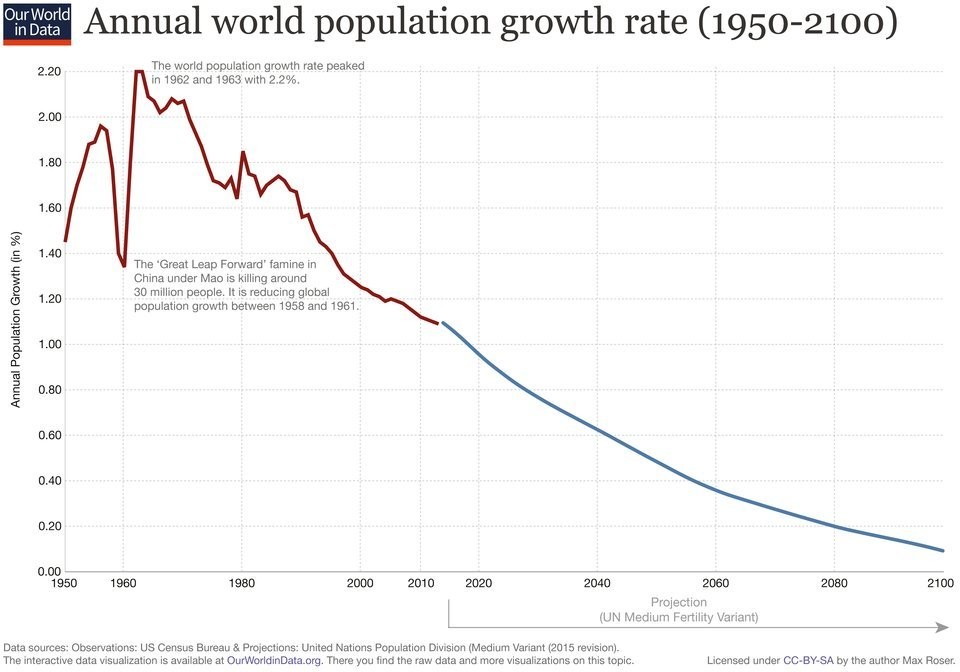 Image: Our World In Data

5. This video shows which areas the world's population grew in at which times.

6. This ticker from the US Census Bureau shows how the US and global population is growing in real time.

7. This animation from the American Museum of Natural History shows how populations grew in relation to major world events.

8. This map shows the difference in population density in different countries.

9. This image shows the population densities of New York, Philadelphia, and Washington, DC. The higher the spike, the more people live at its base.

The spikes on this map show the population densities for New York, Washington, DC, and Philadelphia. Image: Matthew Daniels/ThePudding

10. This graph shows how the world's population is estimated to hit 10 billion in 2056, according to the UN Population Division.

11. This animation shows how the US' population expanded as it grew westward from 1790.

via GIPHY - See the full graphic and more at Vivid Maps.

12. This final map shows the estimated 2019 population of every country on the planet.

Read the original article on INSIDER.

This article is published in collaboration with Business Insider