China Is Killing And Brainwashing Millions Of Muslims In Concentration Camps

This issue is something most of us never heard about. We also thought it was fake news until we started our own research. The results are utterly shocking. China is actually building concentration camps to brainwash muslim people.

An investigation by Reuters has revealed a massive expansion of internment camps for hundreds of thousands of Muslims in China’s Xinjiang province. Beijing says they are there for “rehabilitation,” but human rights groups say the camps are used for political brainwashing of innocent people.

China is putting muslims in so-called "interment camps", which are actually concentration camps. They are forced to denounce Islam, adopt atheism and pledge alliance to the Chinese state. Activist Aydin Anwar on Chinese genocide and interment of Muslims in a movie from NowThis.

Up to one million Uighurs and other Muslim minorities are believed to be held in extra-legal detention in Xinjiang, according to previous UN estimates, prompting an international outcry.

However, Uighur activists believe that up to three million people have been detained in the camps, according to non-governmental organisation Amnesty International. There are approximately 12 million Muslim minorities in Xinjiang.

‘The camps are similar to the wartime concentration camps, the scale is comparable and the repressive environment is similar,’ he said.

‘There are brainwashing political classes in the camps, where people are beaten up if they don’t follow orders. The overall atmosphere is very repressive,’ he added, citing accounts from ex-detainees.

An AFP report in October revealed that thousands of guards at the camps were equipped with tear gas, Tasers, stun guns and spiked clubs, according to publicly available government documents.

The centres should ‘teach like a school, be managed like the military, and be defended like a prison’, said one document, quoting Xinjiang’s party secretary Chen Quanguo.

In previous reports, others have said they were forced to eat pork and drink alcohol, as well as denounce Islam and profess loyalty to the ruling Communist Party.

They also found themselves incarcerated for transgressions such as wearing long beards and face veils or sharing Islamic holiday greetings on social media, a process that echoes the decades of brutal thought reform under Mao Zedong.

There is mounting evidence to suggest that Muslim inmates are being turned into forced labour, reports claim

After undergoing indoctrination at the camps, detainees are sent to the new factories built inside or near the internment camps in an emerging system of forced labour, according to the New York Times.

Satellite imagery suggests that production lines are being built inside some internment camps. Another image of a camp featured in state television broadcast show 10 to 12 large buildings with a design commonly used for factories, according to the report.

Commercial registration records show several companies including a printing factory, a noodle factory and at least two clothing and textile manufacturers were established at addresses inside interment camps.

A Turkish researcher told The New York Times that the detainees ‘provide free or low-cost forced labour for these factories,’ based on the various inmate accounts he has collected through interviewing their relatives.

Inmates told their relatives that they were forced to make clothes under tough working conditions and earned low wages, according to Atajurt Kazakh Human Rights, an organisation in Kazakhstan that helps ethnic Kazakhs who have left neighboring Xinjiang.

One detainee was sent from a camp to work in a carpet factory and another was sent to work at a textile factory for US$95 (£75) a month. They are not allowed to leave the factories and communication with relatives, if permitted, is heavily monitored, according to a Financial Times report.

However, since August, the Chinese government has defended the camps by arguing that they are vocational training centres that will provide detainees the skills needed for a job in Chinese society, including learning Mandarin.

‘Xinjiang has established a training model with professional vocational training institutions as the platform, learning the country’s common language, legal knowledge, vocational skills, along with de-extremisation education,’ the chairman of Xinjiang’s government, Shohrat Zakir, said in an ardent defence of the use of the centres.

But the British do not need to throw stones, while they are sitting themselves in a glasshouse on their overcrowded concentration-camp- island. See: Big Brother Britain: Extraordinary moment police FINE pedestrian £90 for disorderly behaviour after he tries to cover his face from facial recognition camera on the streets of London

China is creating concentration camps in Xinjiang. Here’s how we hold it accountable – Washington Post 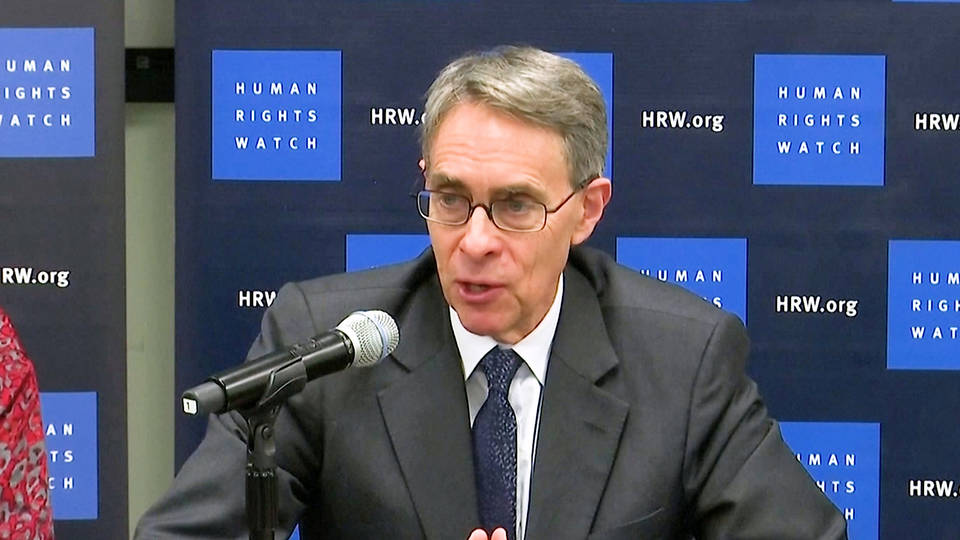 Human Rights Watch has blasted China in its new report, accusing the Chinese government of human rights violations against Uyghur Muslims in the Xinjiang region and protesters in Hong Kong, as well as efforts to censor Chinese citizens living abroad. This comes as China has barred the head of Human Rights Watch Kenneth Roth from entering Hong Kong to present the report. This is Kenneth Roth responding to officials’ claims they had barred his entry for “immigration reasons,” even though U.S. citizens are entitled to visit Hong Kong for up to three months without a visa.

Kenneth Roth: “Why did Beijing put forth this preposterous explanation for barring me? I think the reason is that the Chinese government is terrified of admitting this genuine desire for democracy on territory that they rule, because if they admit that this is an indigenous and natural, a spontaneous desire, rather than what they claim — it’s a foreign imposition, it’s Human Rights Watch inciting people — then what’s happening in Hong Kong might spread to the mainland. And that’s really the big fear.”