Business, as usual, has to end

“The key message: business, as usual, has to end,” i.e. globalization needs to stop if people want the planet to be saved.

A new study by the United Nations published Monday revealed that due to humans one million animal and plant species are threatened with extinction.

The relentless pursuit of economic growth, twinned with the impact of climate change, has put brought forth this risk.

Only a wide-ranging transformation of the global economic and financial system could pull ecosystems that are vital to the future of human communities worldwide back from the brink of collapse, concluded the report, which was endorsed by 130 countries, including the United States, Russia, and China.

“The essential, interconnected web of life on Earth is getting smaller and increasingly frayed,” said Professor Josef Settele, who co-chaired the study, released in Paris Monday by the Intergovernmental Science-Policy Platform on Biodiversity and Ecosystem Services (IPBES).

“This loss is a direct result of human activity and constitutes a direct threat to human well-being in all regions of the world.”

Compiled by 145 expert authors from 50 countries, the study is a cornerstone of an emerging body of research that suggests the world may need to embrace a new “post-growth” form of economics if it is to avert the existential risks posed by the mutually-reinforcing consequences of pollution, habitat destruction, and carbon emissions.

Known as the Global Assessment, the report found that up to one million of Earth’s estimated eight million plants, insect and animal species are at risk of extinction, many within decades.

Industrial farming and fishing are identified as major drivers of extinction. Climate change due to the fossil fuel industry is aggravating the situation.

Robert Watson, a British environmental scientist said one could go back only if societies were prepared to confront “vested interests” committed to preserving the status quo.

“The report also tells us that it is not too late to make a difference, but only if we start now at every level from local to global,” Watson said in a statement.

“By transformative change, we mean a fundamental, system-wide reorganization across technological, economic and social factors, including paradigms, goals, and values.”

"We know that the way people eat today is often unhealthy for them and for the planet," said Dr. Kate Brauman, one of the report's authors.

"We can become healthier as individuals by eating more diverse diets, with more vegetables, and we can also make the planet healthier by growing that food in more sustainable ways."

The Global Assessment contained a litany of estimates made after a three-year review of some 15,000 scientific papers that showed the profound impact of the rise of a globalized industrial society on the planet over the past half-century.

The loss of the natural world would also affect human lives according to the report. From the disappearance of insects vital for pollinating food crops, to the destruction of coral reefs that support fish populations that sustain coastal communities, or the loss of medicinal plants, all would inevitably risk human lives.

The threatened list includes more than 40 percent of amphibian species, almost 33 percent of reef-forming corals, and more than a third of all marine mammals. The picture was less clear for insect species, but a tentative estimate suggests 10 percent are at risk of extinction.

“We have been running from one frontier to another frontier trying to find cheap nature (to exploit) in every corner of the planet,” Eduardo Brondizio, a professor of anthropology at Indiana University in the United States who co-chaired the Global Assessment, told Reuters.

“The key message: business, as usual, has to end.”

Save Nature to Save Ourselves, UN Report Pleads 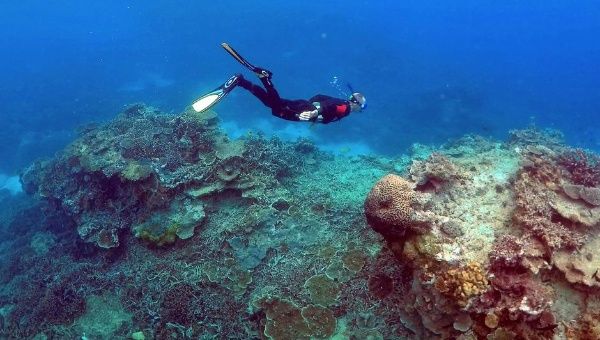 Sunny Side Up: Australian PM Egged By Protester
Opinion

Notre Dame of Gaza: Our Mosques and Churches Are Also Bur...

Jimmy Carter: US Is Most Warlike Nation in History of the...

War Versus Peace: Israel Has Decided and So Should We

Politics of Culture in US: 'The Invisible Hand of the Mar...

One million animal and plant species face extinction, many within decades, they reported.

Humanity is rapidly destroying the natural world upon which our prosperity - and ultimately our survival - depends, according to a landmark UN assessment of the state of Nature released Monday.

Changes wrought by decades of pillaging and poisoning forests, oceans, soil and air threaten society "at least as much as climate change," said Robert Watson, who chaired the 132-nation meeting that validated a Summary for Policymakers forged by 450 experts.

Alarmingly, the accelerating pace at which unique life-forms are disappearing - already tens to hundreds of times faster than during the last ten million years - could tip Earth into the first mass extinction since non-avian dinosaurs died out 66 million years ago.

In the short term, humans are not at risk, said Josef Settele, a professor at the Helmholtz Center for Environmental Research in Germany and co-chair of the UN Intergovernmental Science-Policy Platform on Biodiversity and Ecosystem Services (IPBES).

"In the longer term, it is hard to say," he told AFP. "If humans do go extinct, Nature will find its way, it always does."

Halting and reversing these dire trends will require "transformative change" - a sweeping overhaul of the way we produce and consume almost everything, especially food, the report concluded.

"We are eroding the very foundations of our economies, livelihoods, food security, health and quality-of-life worldwide," said Watson.

The pushback from "vested interests," he added, is likely to be fierce.

Drawing from 15,000 sources and an underlying 1,800-page report, the executive summary details how our growing footprint and appetites have compromised the natural renewal of resources that sustain civilization, starting with fresh water, breathable air, and productive soil.

An October report from the UN's climate science panel painted a similarly dire picture for global warming, and likewise highlighted the need for social transformation "on an unprecedented scale" to cap the rise in temperature at 1.5 degrees Celsius.

Climate change and biodiversity loss, it turns out, feed off each other in a vicious cycle.

Deforestation and industrial agriculture are major drivers of species and ecosystem decline, but also account for at least a quarter of man-made greenhouse gas emissions.

Global warming, in turn, is pushing thousands of animals and plants out of their comfort zones, and intensifies the kind of heatwaves and droughts that recently fuelled unprecedented fires in Australia, Indonesia, Russia, Portugal, California and Greece.

The overlapping drivers of global warming and biodiversity loss point to shared solutions, but there is potential for policy conflict too, the new report cautioned.

Plans to green the global economy reserve a crucial role for burning biofuels and locking away the CO2 released, a technology known as BECCS.

But the huge tracts of land needed to grow energy crops on this scale - roughly twice the size of India - would clash with the expansion of protected areas and reforestation efforts, not to mention food production.

For the first time, the UN body has ranked the top five causes of species lost and the degradation of Nature. By a long shot, the first two are diminished or degraded habitat, and hunting for food or trade - often illicit - in body parts.

All but seven percent of major marine fish stocks, for example, are in decline or exploited to the limit of sustainability despite efforts by regional management organisations to fish sustainably.

Global warming is third on the list, but is likely to move up.

"We can see the climate change signal getting stronger really, really quickly," IPBES co-chair Sandra Diaz, a professor at the National University of Cordoba in Argentina, told AFP.

Numbers four and five are pollution - 400 million tonnes of heavy metals, toxic sludge and other waste are dumped into oceans and rivers each year - and alien species, such as rats, mosquitoes, snakes and plants that hitch rides on ships or planes.

"Every extinction of a species is a failure of humankind," said Alexandre Antonelli director of Britain's Royal Botanical Gardens in Kew, reacting to the report.

"We can't just preserve, we must reverse the trend by increasing biodiversity."

The heavily negotiated text does not set benchmarks for progress or "last chance" deadlines for action, as the 2018 climate report did.

In an open letter, some 600 experts, business leaders and celebrities led by conservationist Jane Goodall urged world leaders to "halt the decline in Nature."

"We must radically change the way we live, including how we use energy to power our societies, grow our food, and manage our waste," they wrote.

The report will "serve as a basis for redefining our objectives" ahead of a key meeting of the UN Convention on Biological Diversity in China in October 2020, said co-author Yunne Jai Shin, a scientist at the Research Institute for Development in Marseilles.