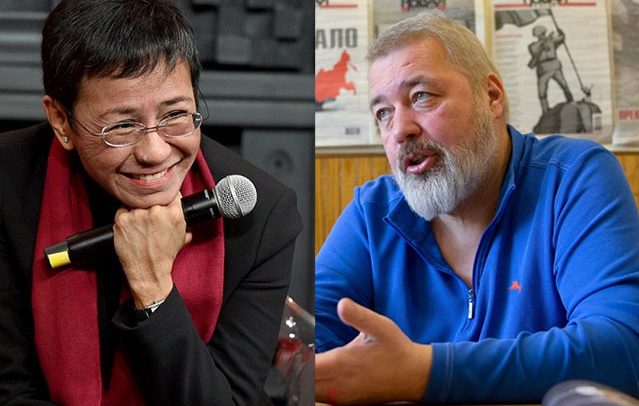 The Norwegian Nobel Committee in Oslo has given the 2021 Peace Prize to journalists Maria Ressaand Dmitry Muratov.

The critics of Philippine President Rodrigo Duterte and Russia's Vladimir Putin have been chosen "for their courageous fight for freedom of expression" in the face of authoritarian crackdowns.

"Ms. Ressa and Mr. Muratov are receiving the Peace Prize for their courageous fight for freedom of expression in the Philippines and Russia," committee chairwoman Berit Reiss-Andersen announced.

"At the same time, they are representatives of all journalists who stand up for this ideal in a world in which democracy and freedom of the press face increasingly adverse conditions," she added.

Who are Ressa and Muratov?

Ressa, 58, is the founder and CEO of Rappler, an online news site combating misinformation and documenting the human rights abuses carried out by Philippine President Rodrigo Duterte'sadministration as part of his brutal war on drugs.

She was convicted of online libel in 2020 under the country's controversial anti-cybercrime law, which critics say is merely a guise for "cyber-authoritarianism."

Muratov was the editor-in-chief of Russian newspaper Novaya Gazeta from 1995 to 2017. Known for its investigative journalism covering corruption and crime, seven of the paper's journalists have been murdered since 2000.

The Committee to Protect Journalists has called Novaya Gazeta the "only truly critical newspaper with national influence in Russia today," amidst President Vladimir Putin's crackdown on dissent.

What has been the reaction?

In comments carried by news agency TASS, the veteran journalist Muratov said: "I can't take credit for this. This is Novaya Gazeta's. It is that of those who died defending the right of people to freedom of speech."

Responding to her win, Ressa said that it illustrated how "nothing is possible without facts."

The Kremlin was amongst the first to congratulate one of its strongest critics. Muratov "persistently works in accordance with his own ideals, he is devoted to them, he is talented, he is brave," said spokesman Dmitry Peskov.

US President Joe Biden on Friday congratulated the two journalists for winning the Nobel Prize. "Ressa and Muratov have pursued the facts — tirelessly and fearlessly," Biden said in a statement. "They have worked to check the abuse of power, expose corruption, and demand transparency.

"They have been tenacious in founding independent media outlets and defending them against forces that seek their silence."

Reporters Without Borders welcomed the news with "joy," and said the win was a "call for mobilization to defend journalism."

Christophe Deloire, secretary general of the advocacy group, added, however, that the decision also showed an urgency because "journalism is in danger, journalism is weakened, journalism is threatened... all over the world."

Roman Dobrokhotov, a prominent Russian investigative journalist whose website The Inside was recently declared a "foreign agent" by the Kremlin, called Muratov's winning of the peace prize "unexpected."

"I think that the fact that now Muratov will not only be a respected figure but also a Nobel Peace Prize winner could give him some additional level of protection," he added, saying that many other editors-in-chief, including himself, have received "visits" from the police recently.

Igor Kochetkov, founder of the Russian LGBT network credited Novaya Gazeta with the discovery of torture and murder of gay men in the Russian Republic of Chechnya.

"It was only because of the fact that Novaya Gazeta published this information and carried out their investigation [into what was happening in Chechnya], that we were able to start evacuating people and saving people's lives," Kochetkov said.

Without the cooperation with Novaya Gazeta we couldn't have changed the situation. So it's hard to overstate the role of Novaya Gazeta," he added.

How are the recipients chosen?

Each year, the committee permits nominations from a large pool of experts, such as academics, lawmakers, and previous recipients.

The winner is invited to Norway to give a Nobel lecture and receive a monetary prize worth 10 million Swedish kronor (over $1.14 million; €980,000).

The only prize not handed out in Sweden, the peace prize is awarded to those who have "done the most or the best work for fraternity between nations."

However, the prize is not without controversy, having been given in the past to individuals who went on to be accused of human rights abuses and war crimes. [like Barak Hussein Obama and Abiy Ahmed Ali]