CORONA FASCISM AROUND THE WORLD

UPDATE 01. September 2021: NAZIS IN THE USA, THE EU RING OF STARS AND THREE CRITICAL BOOKS

COVID FASCISM AROUND THE WORLD

The globalist corporatist elites who have for decades ignored and bypassed the parliaments and people of democratic nation states (in the UN, WHO, EU) have exploited the COVID crisis and emerged unchallenged as the fascists they always were. In order not to lose this position of dictatorship they have invented the “Great Reset” to prevent the angry revolution against their corporatist socialist plans.

Now their “inner Nazi” has everywhere exploited closed or spineless Parliaments and openly attacked the people. In the UK, Australia, France and Germany the centralising, authoritarian totalitarian State has stamped its boot on the people. As George Orwell said:

“If you want a picture of the future, imagine a boot stomping on the human face, forever.” - George Orwell 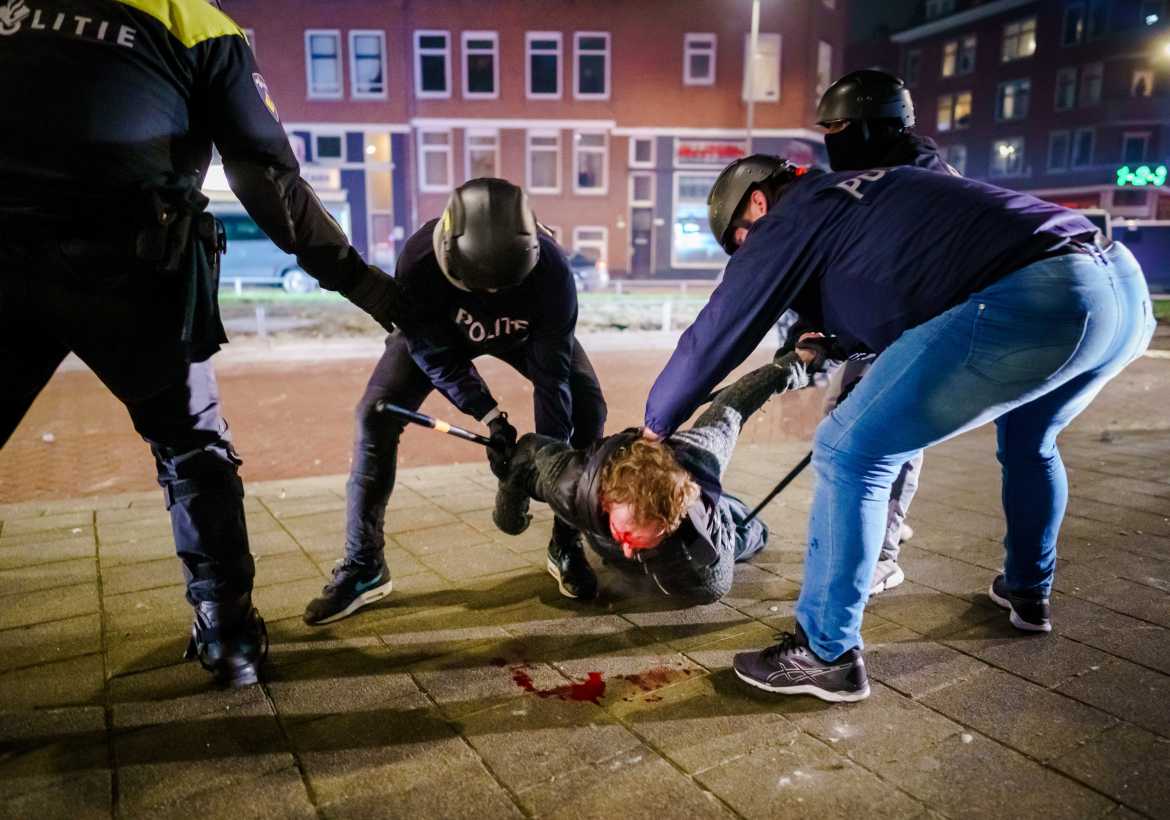 A man is arrested by Police during clashes in Rotterdam, The Netherlands, 25 January 2021. Police's mobile unit is present and has carried out charges to clear the street. Some arrests have also been made and a water cannon has been used. Nationwide protest against coronavirus restrictions and curfew imposed by Dutch government broke out during the weekend in many Dutch cities, leading to some violent riots and clashes with Police. EPA-EFE/MARCO DE SWART  epa08965315

And yet the grotesque politicians in Australia have a vice like grip on the population with jackboot methods and the police seem to be giving themselves the right to act in the worst traditions of a fascist State. No protest from the Queen of Australia – Elizabeth II.

– POLICE CAN BREAK INTO ANY BUILDING OR VEHICLE

– DIRECT OR PROHIBIT THE MOVEMENT OF PEOPLE ANIMALS OR VEHICLES

– COMPEL PEOPLE TO GIVE INFORMATION

This is a revealing video: https://youtu.be/suvAdPhVyLA

As is this where an Australian Senator rightly accuses the State of fascist suppression:

The Government has written behind the backs of their parents to young children (under the age of consent) advising them to get vaccinated, without of course telling them of the tens of thousands of deaths, serious injuries, thrombosis, blood clots and heart and menstrual disorders which have resulted from these vaccines. Turning children against their parents is a classic element in totalitarian States.

And this is after a series of authoritarian laws passed or proposed by the “liberal” Boris Johnson Government. I quote from an excellent article summarising those laws of control and censorship: https://ordo-ab-covid.com/dear-boris/

And when you take your Online Safety Bill, and add to it your other abuses of power;

﻿Johnson’s fascist Britain has been well demonstrated by the Debbie Hicks case.  The anti-lockdown campaigner who was arrested after she filmed what appeared to be an empty hospital in December last year – and posted the film on Facebook – has been charged with a Public Order Offence. She is now raising funds for her defence. https://www.crowdjustice.com/case/defend-the-right-to-free-speech/ She writes in her appeal for funds:

On the 29th December 2020 I was handcuffed with my hands behind my back and aggressively arrested (while undressed, in my own home) for filming an empty Gloucester Royal Hospital. I was held by the police in custody until late at night, forced to give my DNA against my will and my family were told I was mentally ill.

I have been charged with a Public Order Offence under ‘harassment’ for filming the empty hospital. The police have also put forward for, upon conviction, a criminal behaviour order that can be used to stop me protesting.

A doctor warned the NHS internally about the lies to the public, the lack of care and the failure to apply proven treatments. Nothing happened. He went public – and was then suspended. NHS staff have been threatened with sanctions and/or dismissal if they speak to the media. Dr Sam White’s video is here:

Angela Merkel, brought up a successful member of the East German communist youth movement and prime defender of the totalitarian and economically aggressive European Union, has at home proved a centralising dictator and is not standing in this September’s elections. Under her regime the federal States, set up by the anti Nazi world war winning Allies after 1945, have been coerced into following her edicts and many Germans fear rightly that this will not be a temporary move.

After extreme violence by the police at an anti lockdown protest in Berlin (including in this video throwing woman to the ground) a German police spokesman said “violence is part of the system of law!” Even the UN has intervened to protest

There are few more openly fascist actors on the world stage than the little man who parades as the President of France. Freenations warned about his Napoleon complex a long time ago https://freenations.net/napoleonic-macron-a-classic-leftist-corporatist/ and https://freenations.net/a-letter-from-france-covid19-dictatorship-suits-euro-authoritarian-macron-1944-and-2014/

As our friend Bernard Chalumeau reported in the latter post:

Many laws passed by this Macron government are similar to Nazi laws!!

For example, to move outside our homes, even for a very short time, we must sign a government approved certificate very similar to the Gestapo’s Ausweis!….Yes, indeed!..

We may have to pay heavy fines and the law provides that we can be deprived of our driving license for 3 years (even if we were on foot!..), we are thrown into prison for six months without remission and we must pay a huge fine of 10,000 euros !!! (all these punishments together!!)

Stephen Beet, who lives in Thiat, a small village in the Haute Vienne, says France is now a “dictatorship”. He writes:

The revolt in France (and elsewhere) is gaining momentum and becoming ever more violent. A few days ago a crowd invaded the Hôtel de Ville (City Hall) in Poitiers and threw Macron’s portrait and other documents out of an upstairs window, to the jubilation of those outside!

Here in France it has gone to the extreme with the “Health” Pass. Last week on the 21st ALL restaurants, bars, coffee shops, and any leisure activities like sporting events, theaters, cinemas, museums, were closed to anyone without “the pass” and all staff at these places are mandated to get the jab to keep their job.

It is now a 6 Month prison sentence if you are caught inside any of these places without the pass (the man who slapped the president in the face got only 3 months prison time). Business owners will get a fine of 45,000 euros and 1 year prison sentence if they do not comply with the use of “the pass” and force all their employees to get the jab. (If you know France, you can commit murder and have less of a sentence)

So the result? All the low paid employees quit, they can make more on welfare here. (for now) We can still technically “get take out food” but I just tried last night and every restaurant in our town (that is dine in with take out) has closed their doors due to the lack of staff.

Stephen goes on to describe the irony that Macron’s “health measure” has contributed to the collapse of the health system:

As of last week ALL doctors, nurses and health industry workers have been mandated to get the jab or lose their license, practice, job, business etc.

Since the Health care system is state run and funded, it has been run into the ground. All the good doctors left France 5 Years ago, all the hospitals look like they are 3rd world hospitals since there is no money to repair them, half of the equipment doesn’t work and not every hospital is stocked with supplies needed for daily needs (masks, gels, disposable gowns etc).

Well they took to the streets by the millions and now all the hospitals just lost another 50% of staff capacity. My doctor just went into early retirement (a.k.a. he quit) and I have yet to find a replacement.

So there we have the hideous picture of State totalitarianism and a fascist coup against the people of western nations using the COVID crisis as an excuse. The biggest coup was of course in the USA where a demented moron was “elected” President by one of the greatest frauds in democratic history. We are seeing some of the fruits of that crime in the “peace “ he has brought to Afghanistan. As we see in the weak leadership in the USA, UK and France there is nothing the corporatist socialist globalist elites like more than puppets at the head of nation states. 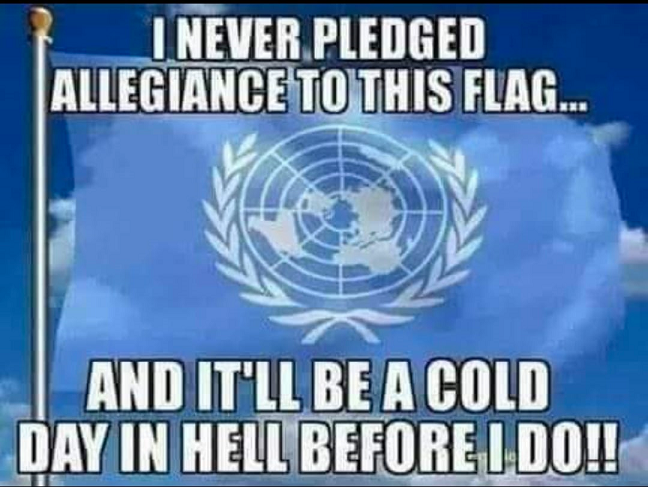 NAZIS IN THE USA, THE EU RING OF STARS AND THREE CRITICAL BOOKS 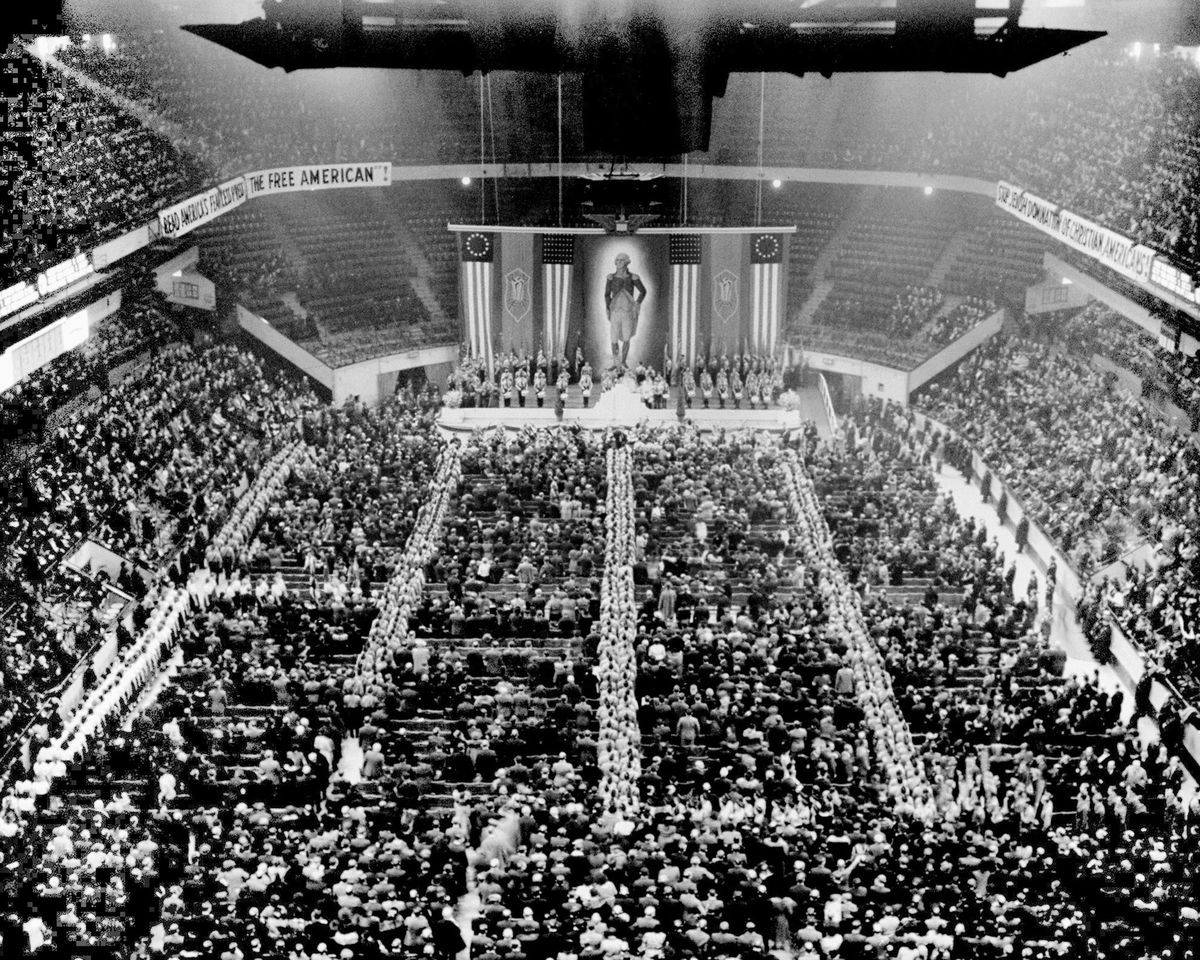 Here in these photographs of a 1939 Nazi rally in New York and the flag of the European Union today we see one of many connections between 1930s Nazism and Fascism and the European Union – the ring of stars. I used precisely that combination in warning of the dangers of the EU on the front of my book Europe’s Full Circle in 1997.

My books over the last 30 years (Your Country Your Democracy, Treason at Maastricht, Europe’s Full Circle, And into the Fire and Fascist Europe Rising – all available on Amazon see this website: https://freenations.net/rodney-atkinson-publications-books/ ) have provided evidence that in the European Union we see the resurgence of that corporatist fascism, German imperialism and French Vichy fascism which brought the Holocaust and 50m deaths in the Second World War. The evidence in those books is overwhelming. There are also two videos on youtube (The Nazis and Fascists who founded the European Union and Brexit or Die)

The 2020 election rigging in the USA, carried out by right wing corporatists and covered up by a left wing media has revealed that the poison has crossed the Atlantic as it did prior to the USA entering the war in 1941.

But they say a picture is worth a thousand words – so here are two! The first is the array of European Union flags outside the Brussels headquarters of the EU. 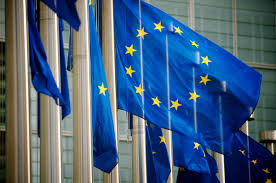 The design was conceived in 1955, and two of its designers said it was based on a statue of the Virgin Mary donated by the Council of Europe to Strasbourg Cathedral but the image of Mary with the ring of stars is much older being described in the book of Revelations.

The second is the stage in Madison Square Garden new York in 1939 decked out for the rally of the German American Bund, the Nazi front organisation in the USA, showing, next to the Swastika, the same “ring of stars”. 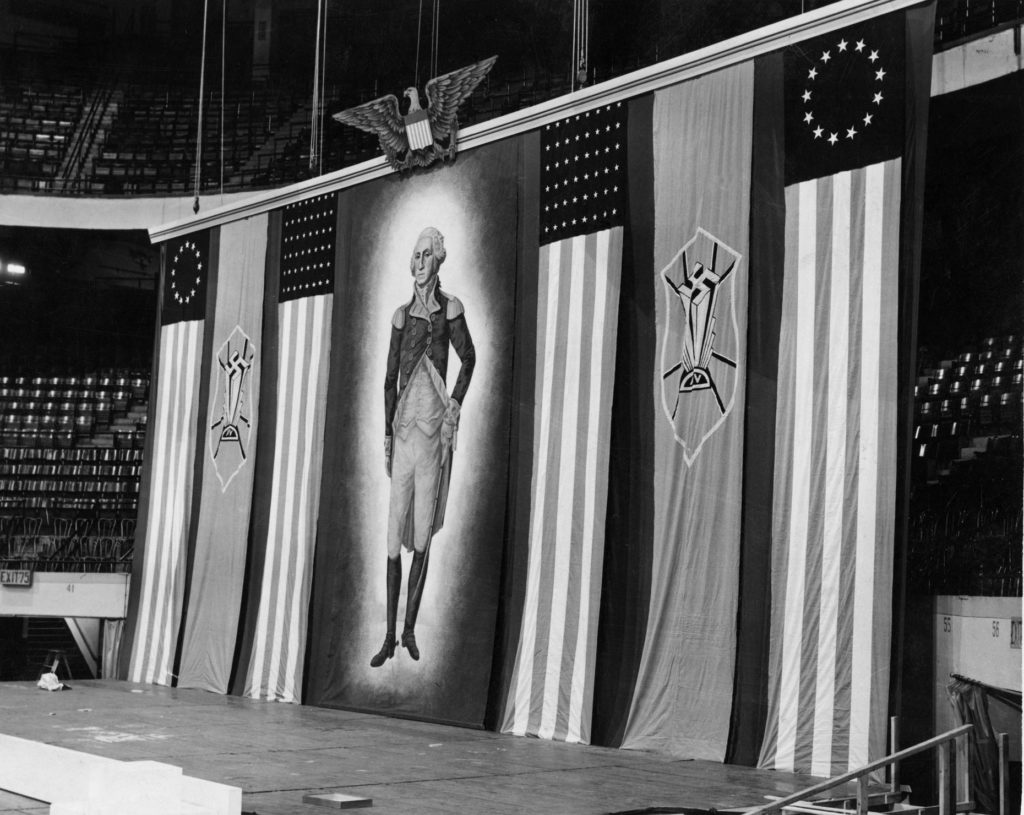 Leading Italian, German, Croatian and Ukrainian Nazis and Fascists escaped to South America through the Catholic organised “ratlines” in Rome at the end of the war. Ratlines: How the Vatican’s Nazi Networks Betrayed Western Intelligence to the Soviets. Mark Aarons and John Loftus. Published by William Heinemann, London, England, 1991

Another image from the Nazis 1939 Madison Square Garden meeting in New York: 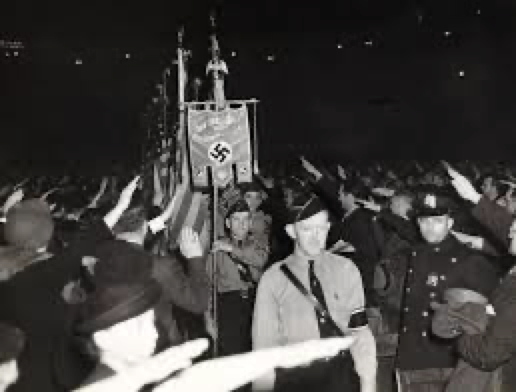 Finally here are the links to the critical books on the incontrovertible connections between the foundation and modern reality of the European Union and the same corporatist and socialist dictatorship which characterised European fascism between 1925 and 1945:

And into the Fire 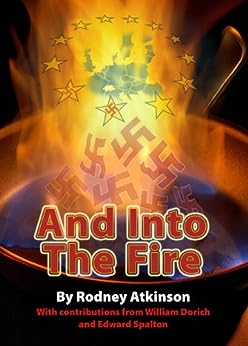 https://www.amazon.com/and-into-the-fire-ebook/dp/b00e68o9sg (BUT BUY HARDCOPY FROM YOUR LOCAL BOOKSTORE!) 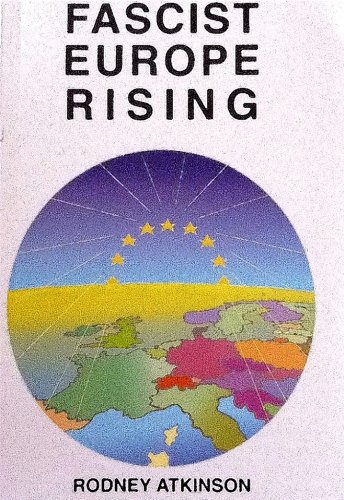 – Corporatist Elites and the New Fascism 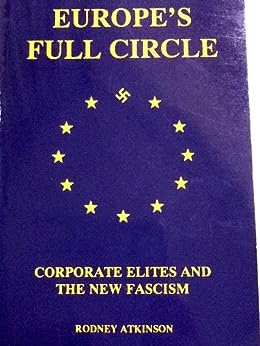 Very little makes sense in this dangerous modern world until you have read these books which have been so widely and greatly praised among political and intellectual leaders but so effectively censored by the mainstream media.