UPDATE 31. August 2021: The CT report below did not know the draconian changes in Australia yet. Australia is now deep RED. - Unprecedented surveillance bill rushed through parliament in 24 hours. - Australian police can now hack your device, collect or delete your data, take over your social media accounts - all without a judge's warrant.

A Global Map of Internet Restrictions 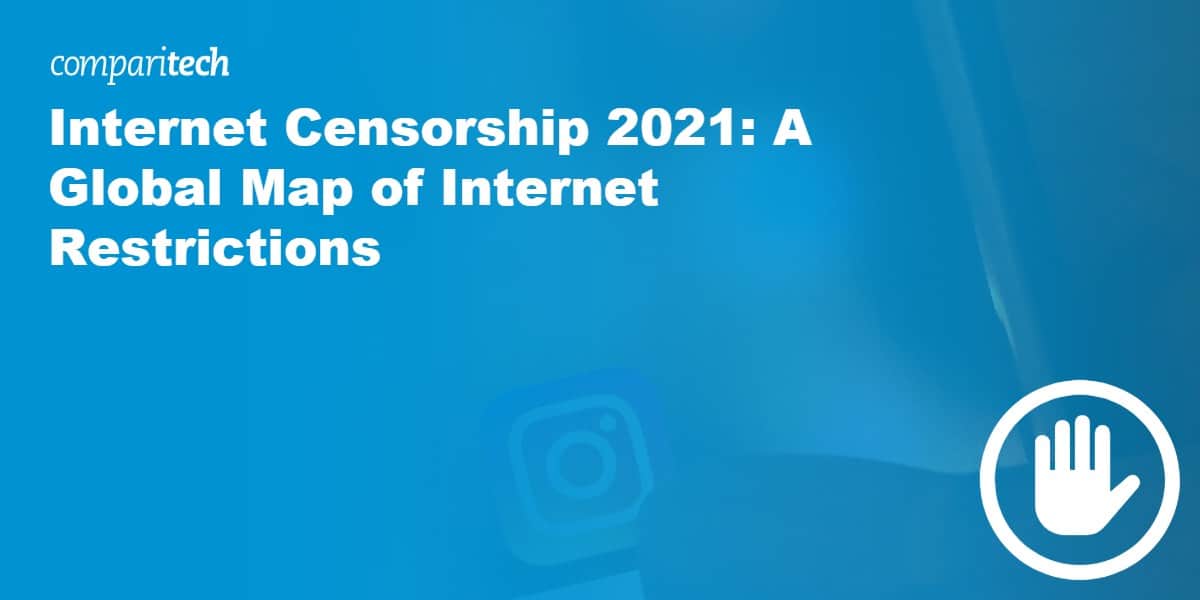 But where in the world can citizens enjoy equal and open internet access – if anywhere?

In this exploratory study, our researchers have conducted a country-by-country comparison to see which countries impose the harshest internet restrictions and where citizens can enjoy the most online freedom. This includes restrictions or bans for torrenting, pornography, social media, and VPNs, and restrictions or heavy censorship of political media. This year, we have also added the restriction of messaging/VoIP apps.

Although the usual culprits take the top spots, a few seemingly free countries rank surprisingly high. With ongoing restrictions and pending laws, our online freedom is at more risk than ever.

We scored each country on six criteria. Each of these is worth two points aside from messaging/VoIP apps which is worth one (this is due to many countries banning or restricting certain apps but allowing ones run by the government/telecoms providers within the country). The country receives one point if the content—torrents, pornography, news media, social media, VPNs, messaging/VoIP apps—is restricted but accessible, and two points if it is banned entirely. The higher the score, the more censorship.

The worst countries for internet censorship

The countries that have increased censorship in 2021

If we compare the scores for each country from our 2020 study to our 2021 study, there are three countries that appear to have upped their censorship. One, as we have already seen, is Thailand. The second, Guinea, saw increased political media restrictions suspensions or threats of suspension across several websites during the October 2020 elections as well as social media restrictions during this time (and ahead of the vote in March, too).

The third is perhaps the most surprising, though. Greece received a mere one point in our first study for its restriction of torrenting (which occurs in every country studied). But in our 2021 revisit, it scores 3. This is due to increased actions against torrenting and restrictions on political media. Reporters without Borders suggested there was a decrease in press freedom during 2020. Media outlets that were critical of the government were omitted or given disproportionately small figures from tax rebates. Public TV channels were ordered not to broadcast a video that showed the prime minister disregarding lockdown rules in February 2021. Coverage of the refugee crisis was heavily restricted. And journalists were reported to have been obstructed by police at a commemorative event. A renowned Greek crime journalist, Giorgos Karaivaz, was also assassinated in April 2021. 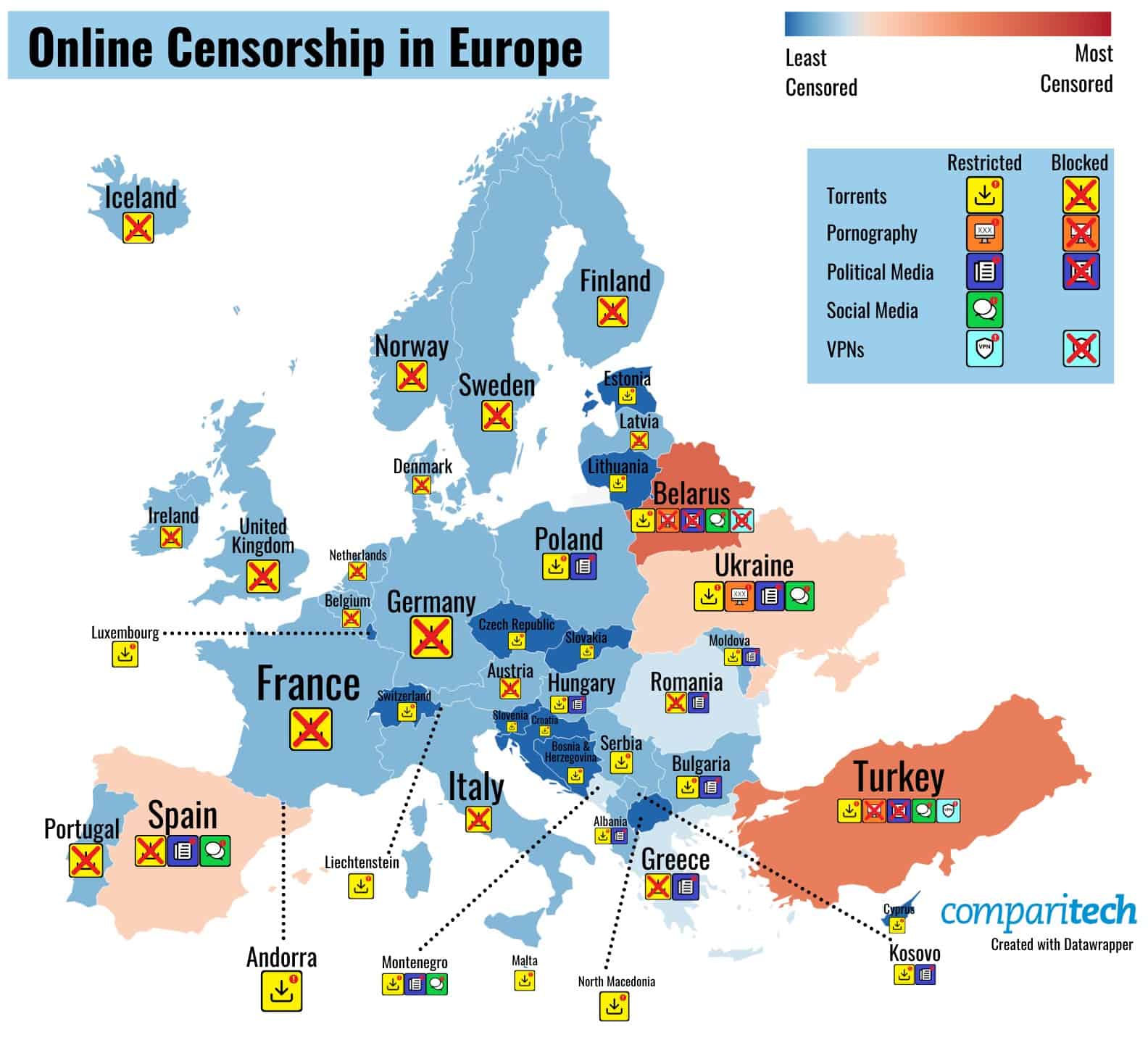 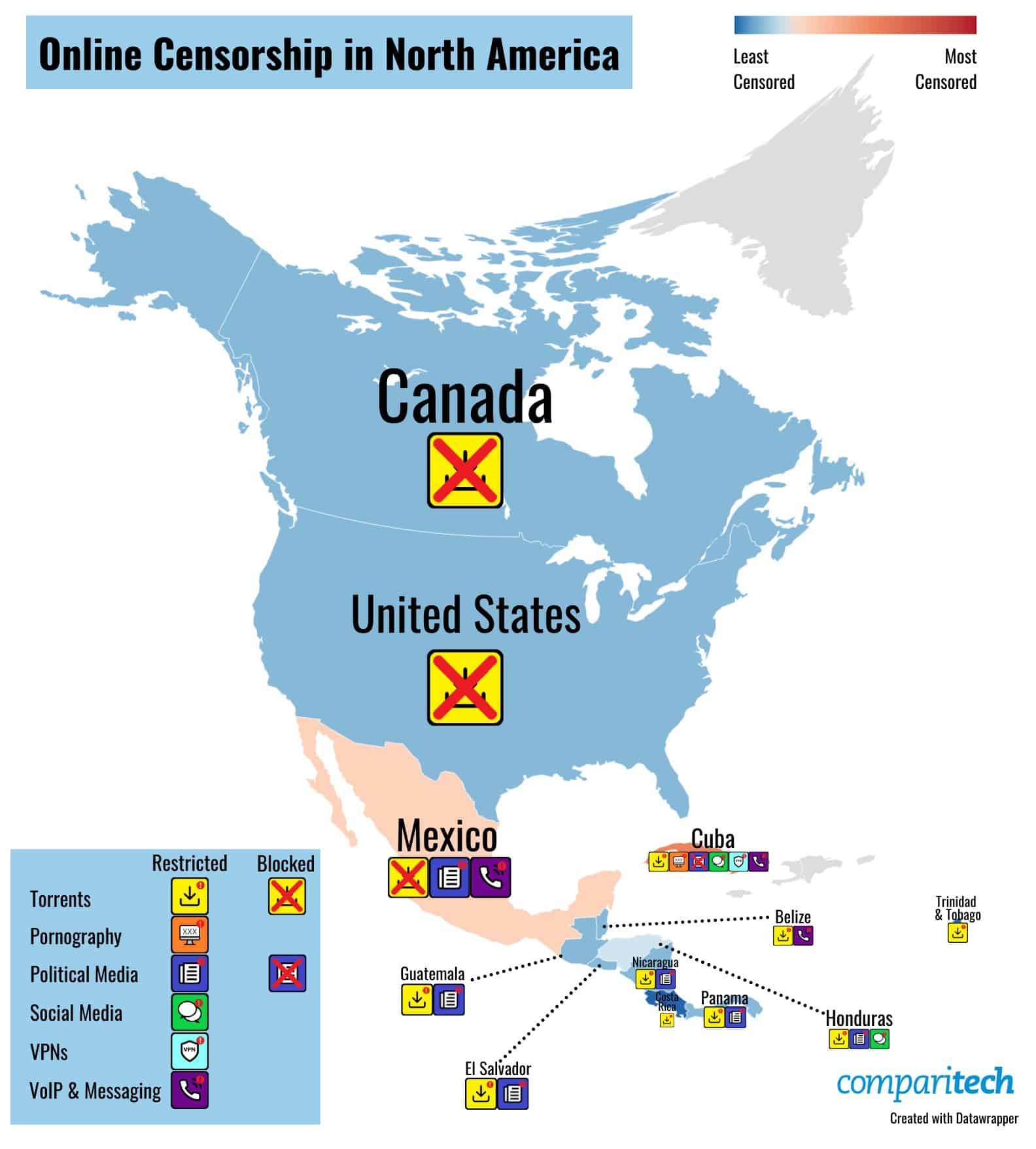 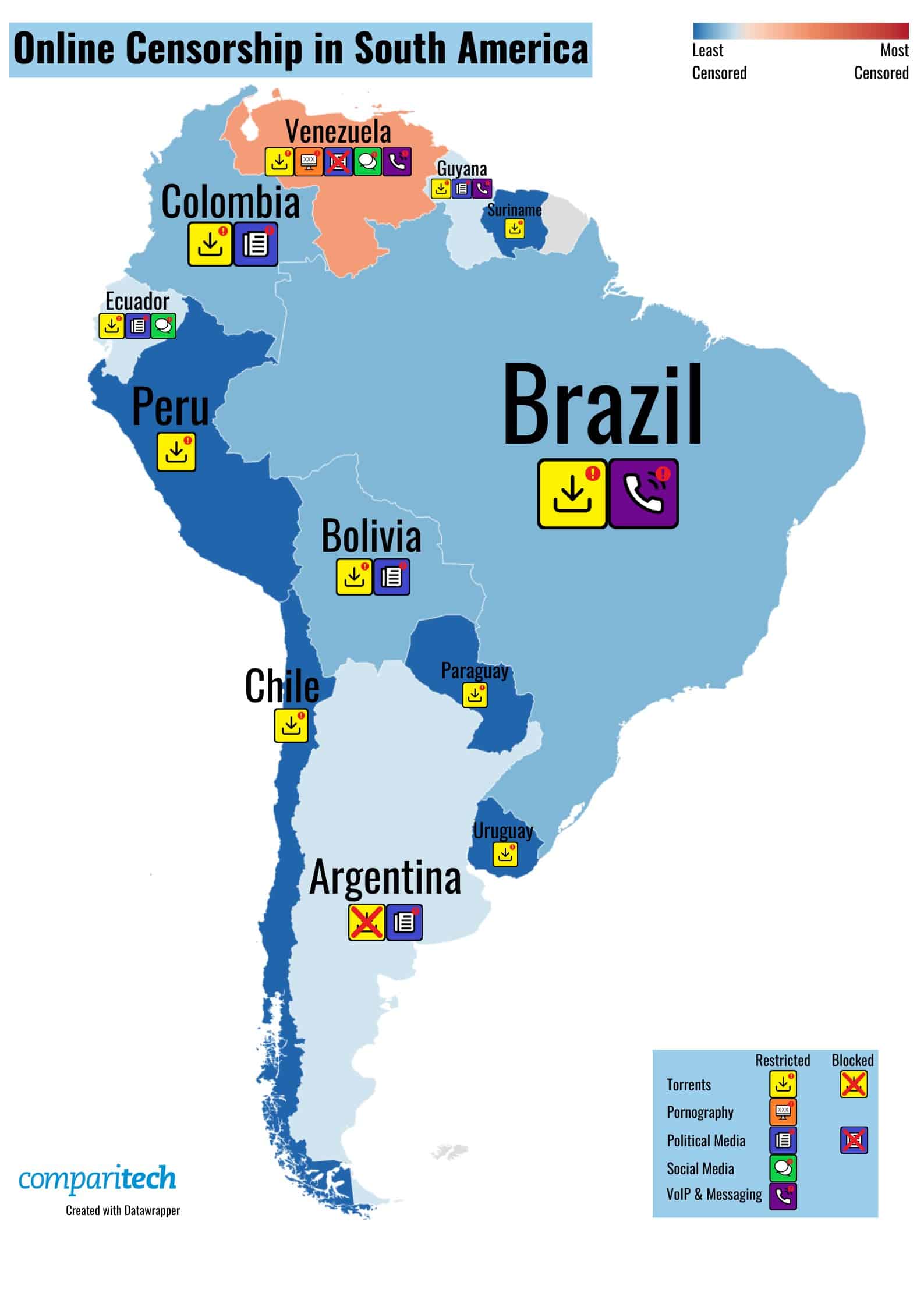 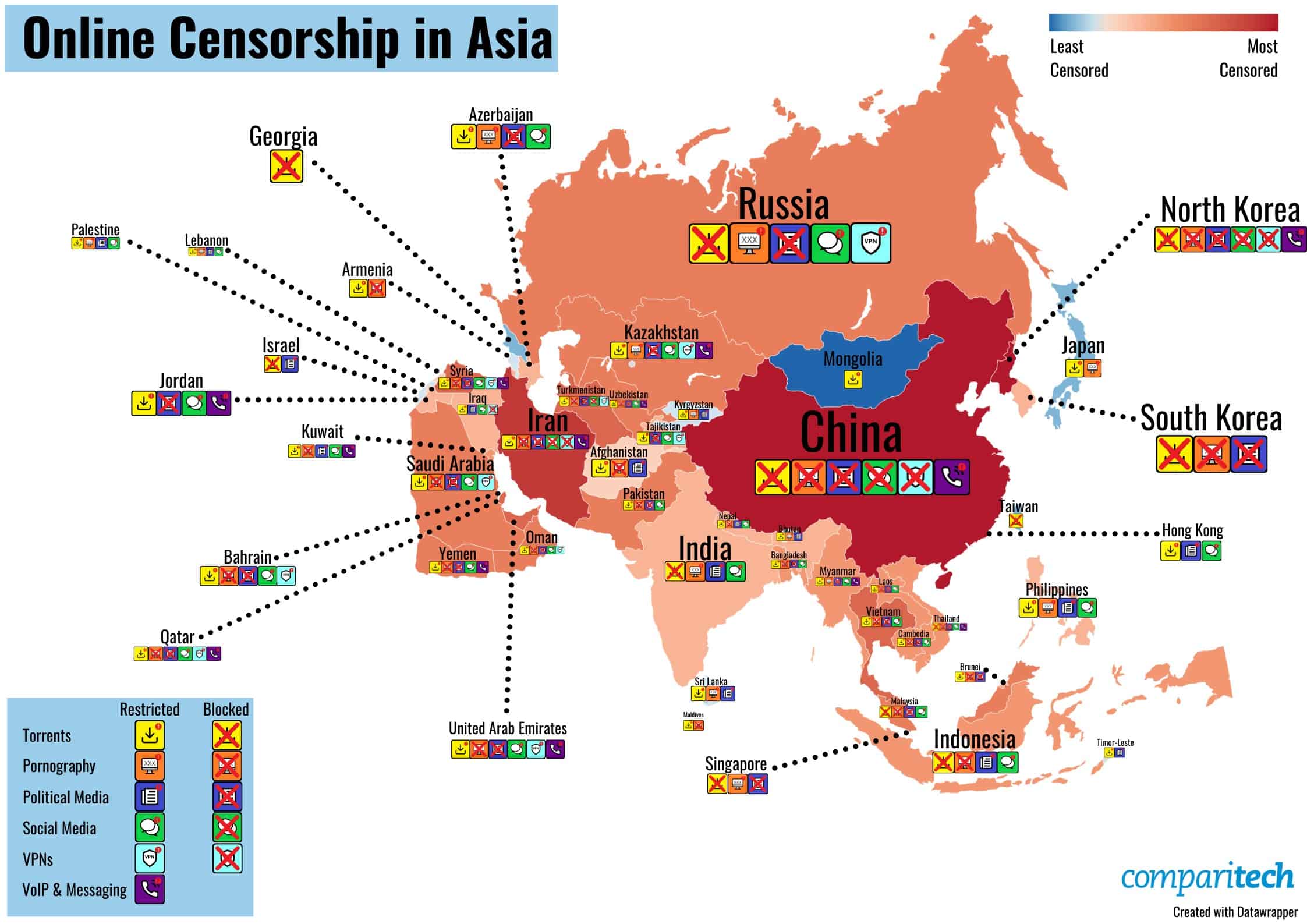 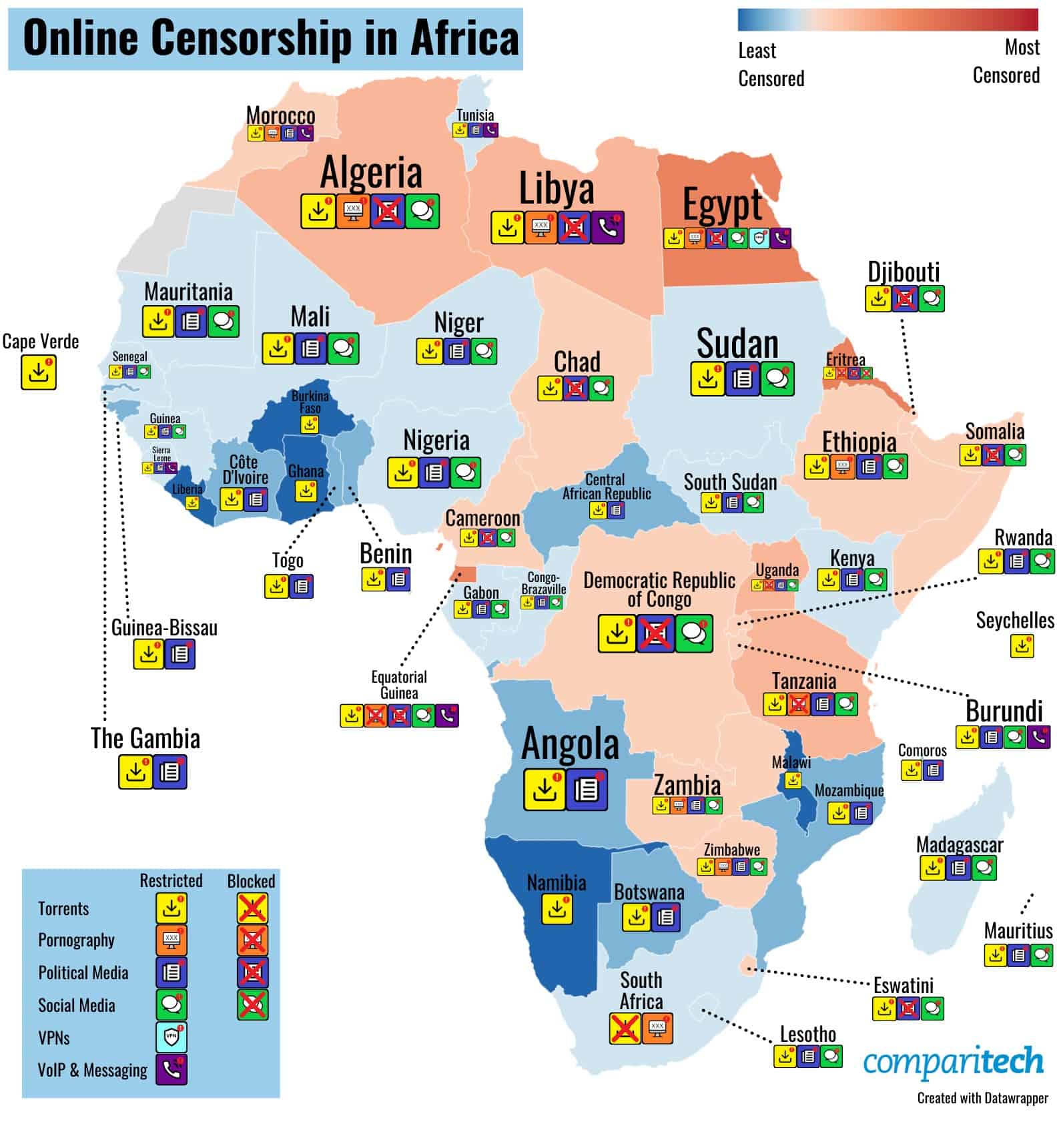 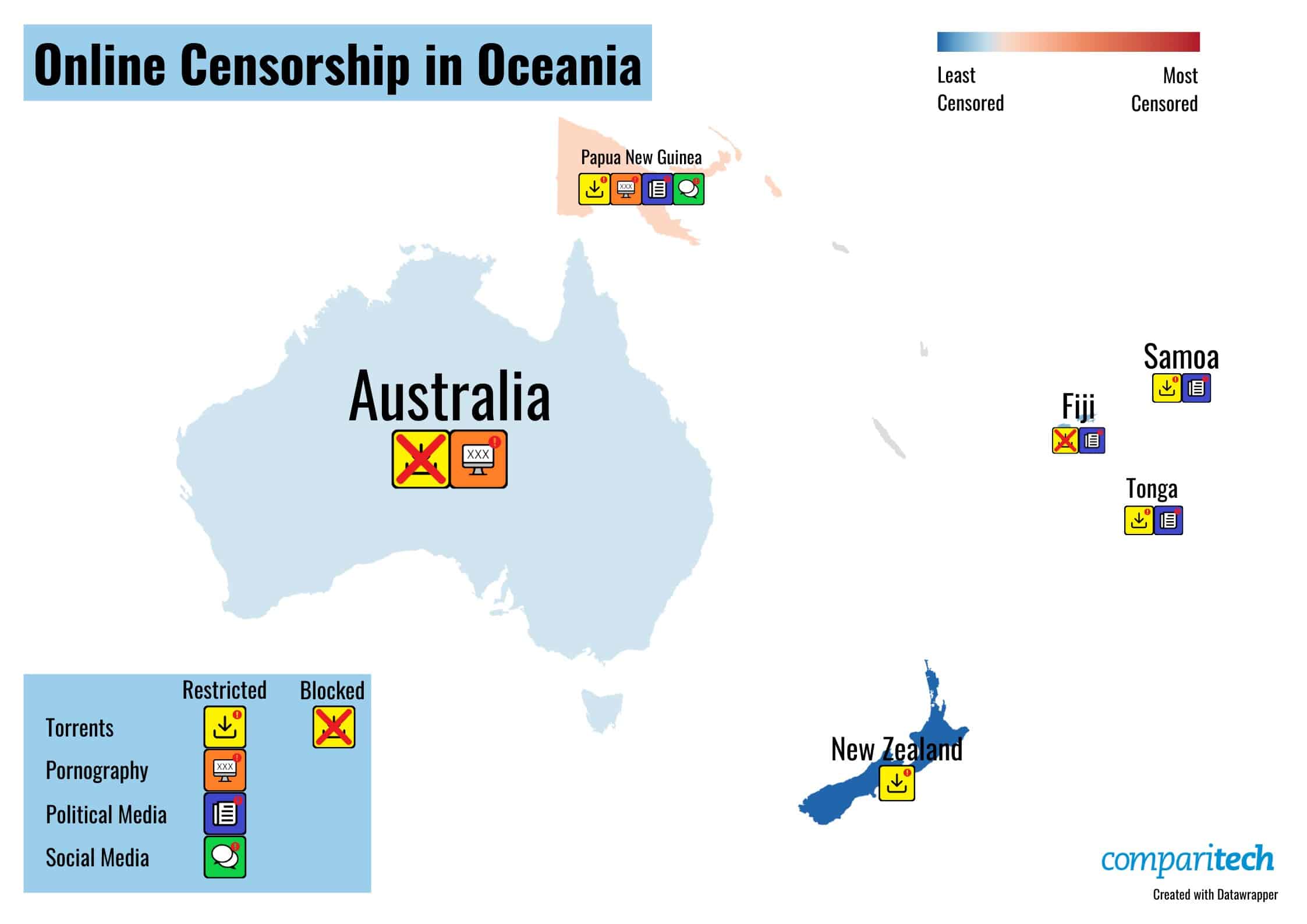 Will online censorship become the “norm?”

While it’s no great surprise to see the likes of China, Russia, and North Korea topping the list, the growing number of restrictions in many other countries is greatly concerning.

Thankfully, VPNs do still offer a way for many of us to surf the net privately (and legally). But as censorship becomes increasingly common, more and more countries could join the restricted list, putting citizens’ digital privacy at risk.

To find out to what extent each country is censored, we have studied each in detail to see what restrictions, if any, they impose across torrents, pornography, political media, social media, VPNs, and messaging/VoIP apps.

We scored each country on six criteria. Each of these is worth two points aside from messaging/VoIP apps which is worth one (this is due to many countries banning or restricting certain apps but allowing ones run by the government/telecoms providers within the country). The country receives one point if the content—torrents, pornography, news media, social media, VPNs, messaging/VoIP apps—is restricted but accessible, and two points if it is banned entirely. The higher the score, the more censorship.

In some cases, countries may be scored as having banned one of these areas but residents may find ways to circumnavigate these bans, e.g. with VPNs or mirror sites. However, as the country enforces this ban by blocking websites or implementing laws, the country is scored as having banned it. On the other hand, if a country has brought in regulations to try and restrict or ban an area but users continue to be able to freely use these services/websites, the country is only scored as being “restricted” because the regulations/laws aren’t being enforced.

Australian police can now hack your device, collect or delete your data, take over your social media accounts - all without a judge's warrant.

The Australian government has been moving towards a surveillance state for some years already. Now they are putting the nail in the coffin with an unprecedented surveillance bill that allows the police to hack your device, collect or delete your data, and take over your social media accounts; without sufficient safeguards to prevent abuse of these new powers.

This month the Australian government has passed a sweeping surveillance bill, worse than any similar legislation in any other five eye country.

The two Australian law enforcement bodies AFP and ACIC will soon have the power to modify, add, copy, or delete your data should you become a suspect in the investigation of a serious crime.

What makes this legislation even worse is that there is no judicial oversight. A data disruption or network activity warrant could be issued by a member of the Administrative Appeals Tribunal, a judge's warrant is not needed.

When presented with such warrant from the Administrative Appeals Tribunal, Australian companies, system administrators etc. must comply, and actively help the police to modify, add, copy, or delete the data of a person under investigation. Refusing to comply could have one end up in jail for up to ten years, according to the new bill.

Justification of the bill

Politicians justify the need for the bill by stating that it is intended to fight child exploitation (CSAM) and terrorism. However, the bill itself enables law enforcement to investigate any "serious Commonwealth offence" or "serious State offence that has a federal aspect".

In fact, this wording enables the police to investigate any offence which is punishable by imprisonment of at least three years, including terrorism, sharing child abuse material, violence, acts of piracy, bankruptcy and company violations, and tax evasion.

Criticism of the surveillance bill

The Australian surveillance bill was heavily criticized by Senator Lidia Thorpe, the Greens spokesperson for Justice:

"The Richardson review concluded that this bill enables the AFP and ACIC to be ‘judge, jury and executioner.’ That’s not how we deliver justice in this country. The bill does not identify or explain why these powers are necessary and our allies in the United States, the United Kingdom, Canada and New Zealand do not grant law enforcement these rights."

"In effect, this Bill would allow spy agencies to modify, copy, or delete your data with a data disruption warrant; collect intelligence on your online activities with a network activity warrant; also they can take over your social media and other online accounts and profiles with an account takeover warrant."

The new Australian surveillance bill signals the end of respect for Human Rights in Australia.

"This is now a regime in Australia where we have conferred power on law enforcement agencies to hack Australians’, and potentially overseas persons’, computers and to take over accounts and modify and delete data on those accounts," he told Information Age.

"Australia doesn’t have constitutionally enshrined rights to political speech and other human rights, but if we’re going to give law enforcement these powers, that should be checked and balanced against a human rights instrument at Federal level."

Murray warns that there could come a point where this power is used against society. In theory, at least, the police could put something like child exploitation images onto your computer. While something like this is not the intention of the bill, there are also no significant safeguards against it.

Having the ability to secretly hack into people’s computers, take over their social media channels, and spy on them fundamentally undermines our right to privacy.

Surveillance is power, and that is a threat to our free and open societies.

In Germany, we know from recent history how devastating a surveillance state is.