UPDATE 30 August 2021: EXCLUSIVE: MASSIVE PROTESTS IN ITALY! - THE REVOLUTION BEGINS NOW! - NO VACCINE PASSPORTS! Get all the Banksters like Mario Draghi in Italy, Emmanuel Macron in France and Jens Spahn in Germany out of office!!!

UPDATE 28. August 2021: LIVE: Protesters gather for new round of anti-health-pass demonstrations in Paris

ICYMI: THE CORONA CRIME NETWORK - JOINING ALL THE COVID DOTS IN 2 MINUTES - German ALLIANZ Group is in it ! + DR SEAN BROOKS - THIS IS WAR THEY WANT YOU DEAD + NEW YORK RISING! NEW YORKERS PROTESTING VACCINE MANDATES AND PASSPORTS. 8/25/21

Government restorts to prohibition of demonstrations and lockdown of a whole city sector, where the governmental offices are located, but thousands of prostesters still march peacefully.

Thousands of people took to the streets of Berlin on Saturday to protest against the government’s measures to contain the Corona virus, despite the vast ban.

Police had banned nine planned demonstrations today, including one from the Stuttgart-based Divergent Thought movement, the most prominent anti-Coronameasures movement in Germany. A court ruled that only one protest would be allowed on Saturday and Sunday, with 500 people each permitted to attend.

More than 2,000 police were deployed across the German capital, but they couldn't stop the many thousand peaceful anti-coronameasures protesters.

Meanwhile, a counter-protest, organized by a hidden hand with paid protesters, called the “Love Train,” complete with techno music, drew a large crowd of its own. Those demonstrators pretended to support government restrictions "to slow the spread of the coronavirus" - a fake narrative anyway.

The Saturday protests come amid debates in Germany about how and whether to impose restrictions for unvaccinated people.

While for a year the hidden governmental forces if Germany had tried unsuccessully to recruit the so-called AntiFa youth, anti-facist youngsters from mainly poor families of the former communist cadres of East-Berlin, and launch them against democratic protesters, they now resorted to pay for "Love-Parade"-style counter-prostests, knowing well that brainwashed young hipsters and the large LGBT+ community of Berlin would follow the lure as long there is money distributed and music hitting the streets. Yes, these masked folks did come out, but still it had no impact on the real protesters against the dystopian Merkel government that will go down with the elections on 26. September 2021. The protests will continue also on 29. August 2021. 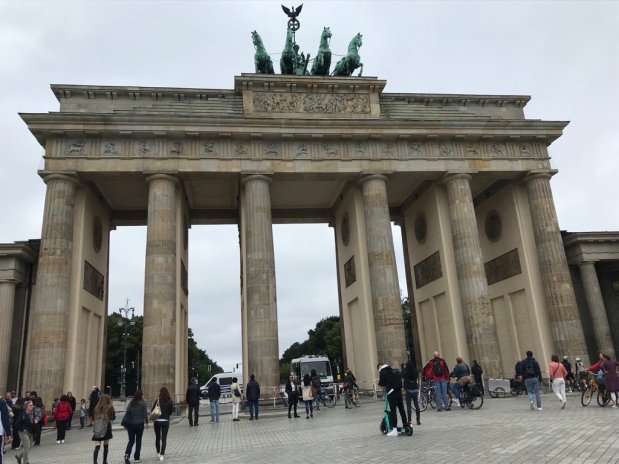 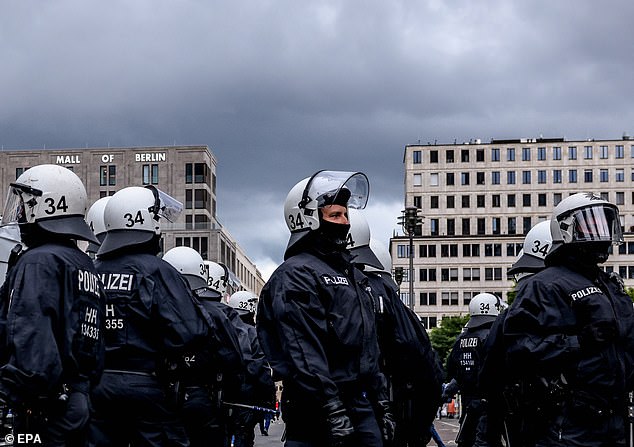 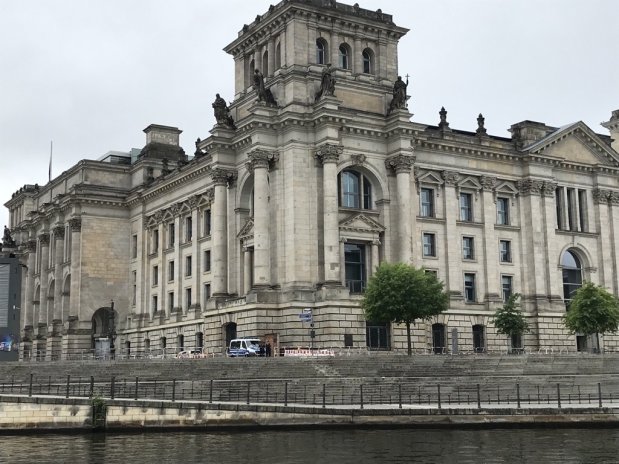 Even the seat of the goverment, the Reichstag, which was briefly stormed last year by protesters, is completely fenced now and in lockup. Foto: Dennis Meischen

COVID-19 sceptics are set to hold a demonstration in Berlin on Saturday, August 28, to protest against government restrictions. Germany currently has a few measures related to coronavirus still in place, including mandatory masks in indoor public places and a ban on big gatherings. Around 53 percent of the Germany population have been fully vaccinated. Please note that the views and opinions expressed in the transmission do not represent those of Ruptly and might conflict with guidelines from social media platforms. 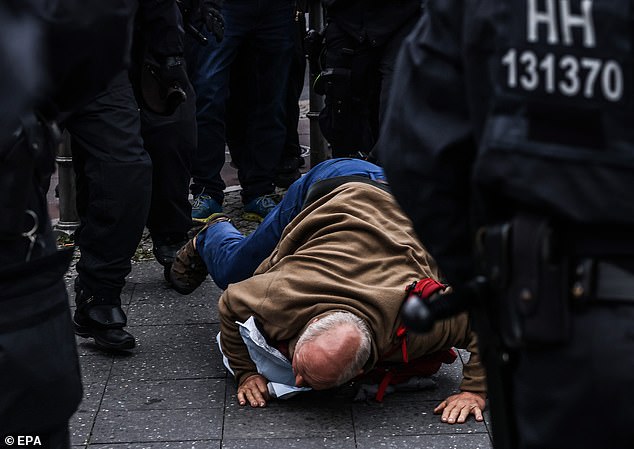 Like on 01. of August 2021 the Riot Police officers arrest mainly elderly protesters in brutal fashion during unauthorised protest against anti-coronavirus measures in Berlin, Germany, 28 August 2021 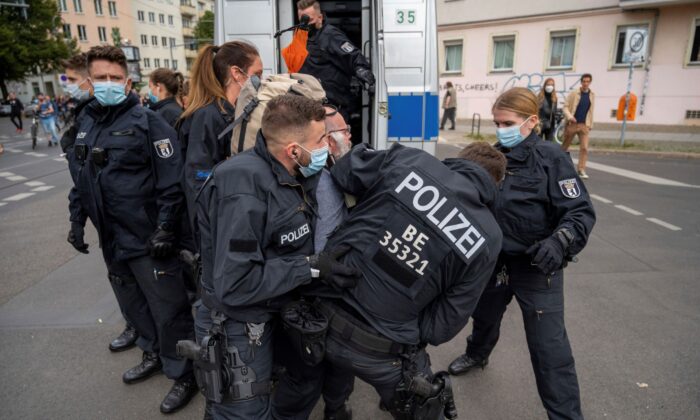 Police restrain an elderly demonstrator during a protest against coronavirus restrictions in Berlin, on Aug. 28, 2021. (Christophe Gateau/dpa via AP) 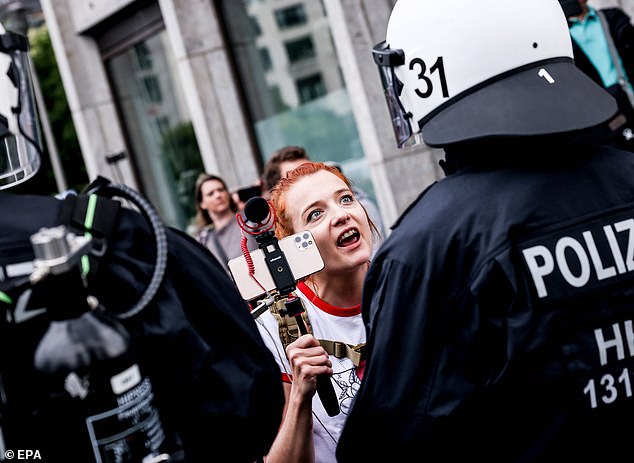 A protester and livestreamer argues with Riot Police officers, who hold chemical mask spray at the ready, during unauthorized but lawful protest against anti-coronavirus measures in Berlin, Germany, 28 August 2021 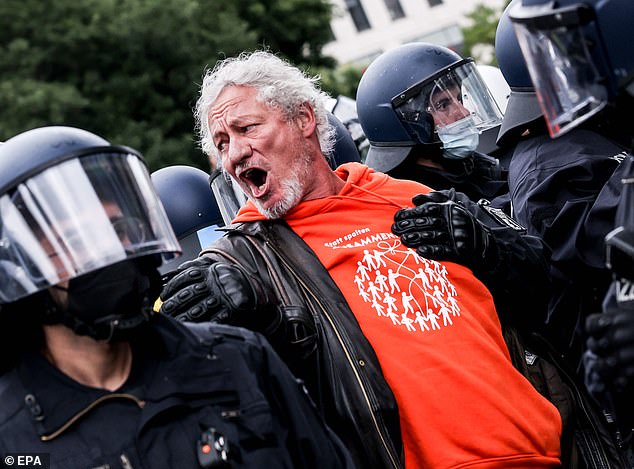 Protesters against coronavirus restrictions in Germany were successful  with hit and run protests blocking Berlin streets on Aug. 28, 2021. despite that courts had ruled these demonstrations as illegal.

The protesters, held placards with slogans such as " I have my opinion" and "Covid-84", which refers to George Orwell's novel "1984".

This mobilization takes place one month before the federal elections. Leading candidates for chancellor have vowed that there will be no return to last year’s strict restrictions and have been reluctant to assert whether they will enfore compulsory vaccination.

To persuade people to get vaccinated, the government has announced that it will ban the distribution of free tests from October 11 - excluding those who cannot be vaccinated, such as pregnant women and young children. Also, those wishing to enter closed restaurants or stadiums and attend religious ceremonies must be vaccinated, tested negatively or have a vaccination certificate, which has been considered by thousands of protesters as a violation of their fundamental freedoms.

DEATH TO THE NEW WORLD ORDER

August 31st is the day, let it spread from Australia like a virus!!!

First published on BITCHUTE August 30th, 2021. And with 'No Jab No Church' the scoundrels of government will now get fire from all Italians! Get all the Banksters like Mario Draghi in Italy, Emmanuel Macron in France and Jens Spahn in Germany out of office!!!

On Saturday, Aug. 28, thousands of protesters took to the streets of London, demanding that the U.K. government halt the vaccine passport program that it has been trialing.

The protest march was organized by the Save Our Rights UK group as a “medical freedom march” that would be “standing against mandated vaccines and vaccine passports.”

Protesters initially gathered in Hyde Park before marching throughout central London, crossing the River Thames and eventually ending at Clapham Common. Along the way, the demonstrators carried placards saying “Big Pharma Loves You,” “Vaccines, a Choice Not a Passport,” “Media is the Virus” and “Hands Off Our Kids.”

Near the end of the protest, some of the demonstrators were arrested by London’s Metropolitan police.

The heavy-handed police response to the protest has drawn criticism, especially when compared to the response to the march held by the environmental group Extinction Rebellion at the same time.

Four arrests were made during the Save Our Rights UK protest. In contrast, none were made at the Extinction Rebellion protest.

“Extinction Rebellion can do what they want, block off Central London, they can sit there for hours and nothing but a couple of people come to Clapham Common and … this is what happens,” said one witness to the police action.

Meanwhile, others were disappointed at mainstream media’s uneven coverage of both protests, with the Extinction Rebellion protest getting more attention.

“A few Extremist Rebellion anarchists perform to a cabbage and it’s all over the news,” wrote political commentator Calvin Robinson on Twitter. “Thousands of people protest against medical tyranny and not a peep.”

“Mainstream media is complicit,” he added.

Meanwhile, author and journalist James Dellingpole pointed out how most British mainstream media treated the protest as if it never happened.

“But [it] didn’t happen, according to the BBC and the rest of the [mainstream media],” he tweeted.

Last Saturday’s march was just the latest in a series of protest actions that have occurred in the U.K. against the vaccine passports that the government has been mulling.

Less than a week before, on August 23, anti-vaccine protesters occupied the headquarters of ITV News and Channel 4 News in London.

The protesters marched from King’s Cross station to ITV News’s Gray’s Inn Road headquarters where they were let in through an emergency exit by a supporter who was already inside the building. The protesters then found themselves face to face with ITV News’ staff and journalists in the building’s reception, separated only by a glass wall.

The U.K. has been trialing vaccine passports since April, when the first trials were implemented as a supposed way to restart public events such as concerts and sporting events. Back then, government leaders promised that the passports would be time-limited. In addition, people could also use evidence of a negative test in place of a vaccine passport. (Related: New update to UK NHS tracking app turns it into a VACCINE PASSPORT.)

But now, the government is looking toward the full introduction of domestic vaccine passports. In July, Prime Minister Boris Johnson announced that vaccine passports would become compulsory to enter packed venues, such as nightclubs, from late September, once all adults have had a chance to receive two vaccinations.

“Vaccination is sensible. But it is entirely wrong to try to coerce people into having them,” stated former Brexit Secretary David Davis.

“I have to say I don’t welcome the minister’s statement, particularly vaccine passports for crowded venues, which is effectively moving to compulsory vaccination,” said MP Mark Harper, who also leads the lockdown-skeptic Covid Research Group. Harper added that the government could struggle to win support for the measures among other Conservatives in government.

“What an absolute shambles,” stated Night Time Industries Association chief executive Micheal Kill. “The government’s own report into vaccine passports found they were more trouble than they’re worth – so what could possibly explain the about-turn, just as millions across the UK experience their first taste of a night out in a year and a half?”

Follow MedicalTyranny.com for more news on vaccine passports around the world.

UPDATE: VIOLENT REPRESSION TODAY IN BORDEAUX DURING THE DEMONSTRATION AGAINST THE HEALTH PASS

MASSIVE PROTESTS AGAINST THE PHARMA-FASCISM IN PARIS 8/29/21

Massive protests against the pharma-fascism in Paris 8/29/21 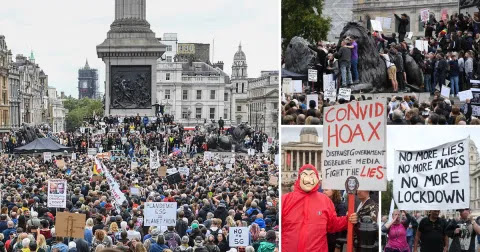 Ruptly is live from Paris on Saturday, August 28, as several groups of protesters, including Yellow Vests, gather for a new round of demonstrations against the COVID health pass. The measure was imposed by the government in July amid a surge in infections. In order to visit cultural venues and sports matches, people are required to show proof of vaccination, a negative test, or a recent recovery from COVID-19.

JOINING ALL THE COVID DOTS IN 2 MINUTES

DR SEAN BROOKS - THIS IS WAR THEY WANT YOU DEAD

The UK Government downgraded the danger of Covid19 from a high consequence infectious disease on 19th March 2020 (1 week BEFORE the first lockdown) - https://www.gov.uk/guidance/high-consequence-infectious-diseases-hcid

A 113 page pdf full of information from frontline workers & the VAERS - https://drive.google.com/file/d/1YK0JR_lFy88Zu3rcC3L5NvL_Xr3ib6zY/view

18 Reasons I won't be getting a Covid19 'vaccine' - https://www.deconstructingconventional.com/post/18-reason-i-won-t-be-getting-a-covid-vaccine

Covid19 is a manufactured pandemic - https://www.globalresearch.ca/manufactured-pandemic-testing-people-any-strain-coronavirus-not-specifically-covid-19/5707781

If there is no virus why are people dying (article) - https://davidicke.com/2021/01/31/covid-if-there-is-no-virus-why-are-people-dying/

5 Questions to ask people who plan on getting a Covid19 'vaccine' - https://off-guardian.org/2021/02/15/5-questions-to-ask-your-friends-who-plan-to-get-the-covid-vaccine/

A brilliant article explaining why the number of cycles (CT) of the PCR Test is pushing out false positives everywhere - https://childrenshealthdefense.org/defender/pcr-testing-incorrect-use/?utm_source=salsa&eType=EmailBlastContent&eId=b2c12bbb-ac81-4cb4-9987-6f4bd15c26f0

MP's & SAGE are heavily invested in the vaccine industry - https://naturallyhealthynews.info/investigation-mps-and-sage-heavily-invested-in-vaccine-industry/?smclient=9e1e643a-d9ec-41cf-a803-a15f88e07abe&utm_source=salesmanago&utm_medium=email&utm_campaign=default

Face masks are neither effective or safe (article) - https://www.technocracy.news/masks-are-neither-effective-nor-safe-a-summary-of-the-science/

COMMON LAW:
Learn Common Law With Knowledge Is Power (Work your way through tabs at the top of page) - https://knowledgeispower-uk.weebly.com/

ILLUMINATI:
The Empire of the City - How 3 independent states controls the world together - https://www.bibliotecapleyades.net/sociopolitica/sociopol_globalelite177.htm

The UNITED STATES isn't a country, it's a corporation - https://www.serendipity.li/jsmill/us_corporation.htm#definitions

There are 2 Constitutions in the United States - https://www.nationallibertyalliance.org/two-us-constitutions

The Rockefeller's own Western medicine - https://www.bibliotecapleyades.net/ciencia2/ciencia_industrybigpharma219.htm

The City Of London (The Crown) owns the UNITED STATES - https://truedemocracy.net/hj31/20.html

EXPOSED: All the Queens agents that control the world - https://aim4truth.org/2018/04/17/exposed-all-the-queens-agents-and-corporations-that-control-the-world/

Who Are The Jesuits? - https://stillnessinthestorm.com/2019/06/the-jesuit-order-exposed/

The Crown Empire & The City of London - https://wakeup-world.com/2013/11/05/the-crown-empire-and-the-city-of-london-corporation/

The City of London Empire - https://humansarefree.com/2013/11/the-british-crown-empire-and-the-city-of-london-corporation.html

Empire of the City - https://www.shiftfrequency.com/empire-of-the-city-states-the-crown-washington-dc-the-vatican/

The Real Controllers of Humanity: The Papal Bloodlines - https://www.dtss.us/blog/the-real-controllers-of-humanity-the-papal-bloodlines/