UPDATE 02. April 2021: "Small" changes made with gene editing cause severe deformities in plants

PROLOGUE: These new finding have huge implications and must be taken into consideration for all gene therapies - including mRNA 'vaccines'

New research from Chinese scientists shows that CRISPR/Cas9 gene editing causes massive damage to the genome, much of which would have been missed by the analytical tools used so far.

In a previous study, the same authors described a novel DNA sequencing procedure, which they called a “primer-extension-mediated sequencing assay” or PEM-seq. By applying this procedure, they found that DNA double-strand breaks (DSBs) brought about by the CRISPR/Cas9 gene-editing tool could lead to unintended chromosomal translocations and large deletions.

In their latest follow-up report, the researchers describe a new computer program, which enabled them to analyse the PEM-seq data to greater depth than previous programs had allowed.

They used this program to analyse real sequence data from their own new experiments, as well as previous ones, following CRISPR/Cas9 gene editing in mouse and human cells.

In gene editing, while the initial double-strand break made by the DNA "scissors" or gene-editing tool can be targeted to a given location, the subsequent DNA repair that makes the "edit" is performed by the cell's own repair mechanisms and is not controllable or precise. The researchers analysed the outcomes of the gene edit – and found what they call "tremendous deleterious DSB repair byproducts of CRISPR/Cas9 editing".

The researchers wrote, "Our findings provide an extra dimension for genome editing safety besides off-targets" – the well documented unintentional DNA damage at locations of the genome that were not targeted for editing. They added, "Caution should be exercised to avoid not only off-target damages but also deleterious DSB repair byproducts during genome editing."

Worryingly, these unintended deleterious outcomes of gene editing were not overcome even when a high-fidelity CRISPR/Cas tool was used. Furthermore, when components of the DNA repair machinery were inhibited in an attempt to force a specific gene sequence modification outcome (known as SDN-2), this resulted in large deletions, large insertions, and DNA cuts around the start site of genes.

Collectively, these findings graphically highlight just how little control the gene editor has over the DNA repair processes and its outcomes, following the formation of the DSB by the CRISPR/Cas gene-editing tool.

How are the findings of the study relevant to plant gene editing? London-based molecular geneticist Dr Michael Antoniou explained, "The mechanisms of gene editing and the subsequent DNA repair processes are the same in animal and plant cells. Given that fact, the implications of the new research are clear. The genome sequencing analysis conducted by the scientists shows that all analyses of gene-edited plants done thus far need to be re-evaluated with this new tool to get a more complete picture of the DNA damage arising from gene editing."

Dr Antoniou and GMWatch have said previously that long range PCR and whole genome long-read DNA sequencing must be applied to gene-edited plants and other organisms. Dr Antoniou commented that the new tool does not replace those analyses, but adds to them: "This latest study adds another invaluable tool allowing a greater depth of analysis of raw DNA sequence data, so that you see a more complete spectrum of outcomes, both on-target (at the intended edit site) and off-target (at other locations in the genome)."

Dr Antoniou added, "This new tool is a major step forward. It is important that it gets widely adopted and used – not just within a medical gene therapy context, as the authors of the new study suggest, but also in the gene editing of crops and animals."

CRISPR-Cas9 generates double-stranded DNA breaks (DSBs) to activate cellular DNA repair pathways for genome editing. The repair of DSBs leads to small insertions or deletions (indels) and other complex byproducts, including large deletions and chromosomal translocations. Indels are well understood to disrupt target genes, while the other deleterious byproducts remain elusive. We developed a new in silico analysis pipeline for the previously described primer-extension-mediated sequencing assay to comprehensively characterize CRISPR-Cas9-induced DSB repair outcomes in human or mouse cells. We identified tremendous deleterious DSB repair byproducts of CRISPR-Cas9 editing, including large deletions, plasmid integrations, and chromosomal translocations. We further elucidated the important roles of microhomology, chromosomal interaction, recurrent DSBs, and DSB repair pathways in the generation of these byproducts. Our findings provide an extra dimension for genome editing safety besides off-targets. And caution should be exercised to avoid not only off-target damages but also deleterious DSB repair byproducts during genome editing.

"Small" changes made with gene editing cause severe deformities in plants 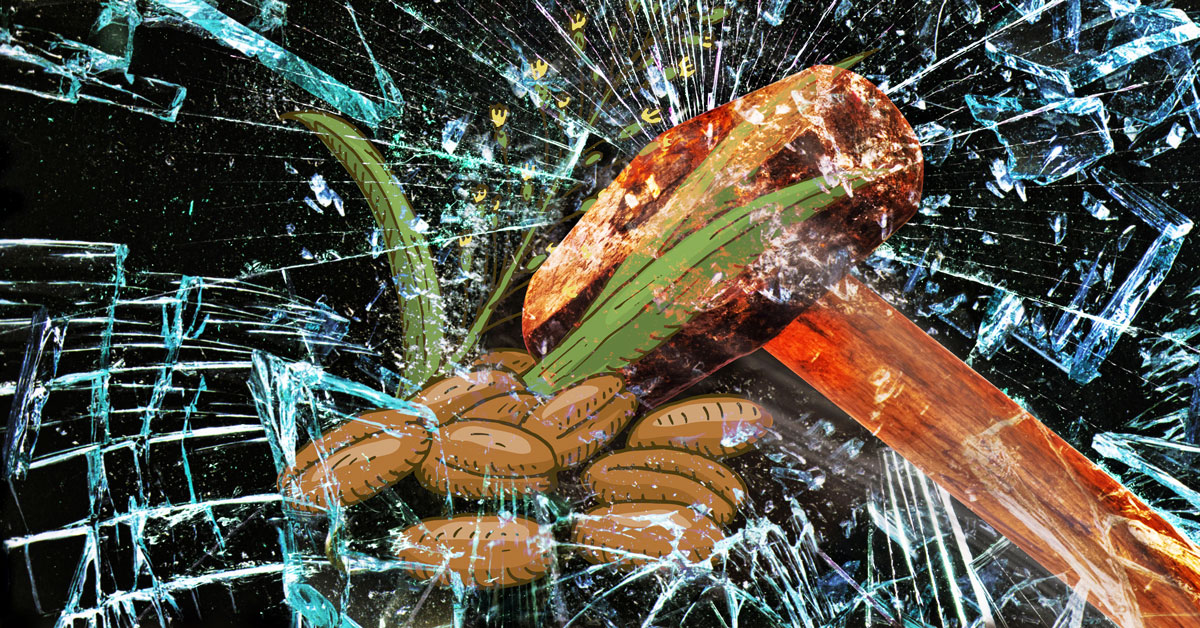 Gene editing causes drastic unwanted effects in gene-edited plants including severe deformities, a new scientific publication in the journal Environmental Sciences Europe shows. This is the case even when the changes are intended by the gene editor to be small tweaks to existing genes rather than, for example, the introduction of new genetic material.

More broadly, the study provides an overview of the negative effects on ecosystems that can result from the release of gene-edited plants. These unintended effects result from the intended changes induced by genome editing, which can affect various metabolic processes in the plants.

The study, authored by Dr Katharina Kawall, uses the example of camelina (Camelina sativa), a plant that is rich in polyunsaturated fatty acids. Gene editors used a CRISPR/Cas application to increase the amount of oleic acid in the camelina seeds and to reduce the amount of easily oxidised fatty acids. This was intended to extend the shelf life of the oil extracted from the camelina.

The new paper reviews previous research in CRISPR-edited camelina lines engineered to have an altered fatty acid profile. Unintended mutations were identified and the plants showed "drastic developmental defects" – including impaired growth, twisted leaves, and delayed bolting. Dr Kawall comments that this shows "the importance of a well-balanced fatty acid profile for the development of the plants".

Dr Kawall observes that these phenotypic defects were even more severe in a recently conducted field trial of a gene-edited camelina by Rothamsted Research in the UK. Although the crop generated the intended high oleic acid seed oil, the plants showed "very significant growth defects" in that they were "severely dwarfed".

GMWatch notes that the observed growth and developmental defects of the gene edited camelina could be arising from an altered pattern of gene function caused by unintended mutations to genes at both off-target an on-target genome editing sites. This is an outcome that was not considered by the developers.

In spite of this unexpected outcome, the authors of the paper that reported it – Johnathan Napier from Rothamsted and Jean-Denis Faure from INRA in France – actually complained in their paper about the "enormous burden" that the EU's GMO regulations place "on researchers (public or private) trying to convert their ideas into innovations and impactful outcomes".

The Napier/Faure paper also reports another gene-edited line that didn't show these deformities, but it's not clear whether they had other, less visible problems – i.e. if they were normal looking plants but with alterations in composition that could lead to unexpected toxicity and allergenicity. As far as we know, Rothamsted has never seen fit to subject their GM plants to safety tests.

The key point about the deformed camelina plants is that only small changes – gene knockouts in existing genes – were intended by the gene editors. This type of gene editing is known as an SDN-1 application and is being targeted for deregulation all over the world, including in the EU and the UK.

Camelina has a six-fold set of chromosomes and is therefore a good example to demonstrate that even small changes in the genome created with CRISPR/Cas can have a huge effect. This type of gene scissors was used to simultaneously mutate and destroy the function of ("knock out") 18 gene copies in the genome of the camelina and thus generate plants with a higher oleic acid content. Such interventions have until now hardly, or not at all, been possible with conventional breeding methods and can give rise to completely new biological properties. In the USA, these plants have already been deregulated without undergoing thorough risk assessment.

But Dr Kawall's analysis shows that even in SDN-1 applications, "major changes of plant physiology and/or phenotype become possible. In addition, there is evidently potential of disrupting metabolic pathways in the genome-edited plants causing pleiotropic effects" – effects other than those intended from the genetic modification.

Risks not dependent on introduction of foreign genes

A recent EFSA opinion also comes to the conclusion that plants with complex genetic changes need to undergo risk assessment, even in cases like this where no additional genes are inserted.

Dr Kawall's paper makes clear that gene-editing applications – most of which use CRISPR/Cas gene scissors to cut the DNA double helix to produce what is known as a “double-strand DNA break” in the genome of the targeted organism – can increase the possibilities and speed with which the genetic makeup of plants can be changed.

It does not matter whether or not additional genes are integrated into the genome – even small genetic changes induced several times in single or multiple genes, and in combination to generate novel properties, can significantly change metabolic pathways and biochemical composition.

Consequently, genetically engineered plants must undergo risk assessment even if no additional genes are inserted.

The new paper also describes how unintended effects on ecosystem processes can occur – for example, effects on the formation of certain messenger substances, with which plants communicate and "warn" of a pest infestation. A change in the composition of fatty acids can affect and influence existing food webs. In addition, gene-edited plants could hybridise with wild species, leading to unintended effects in subsequent generations. At the same time, the gene-edited camelina has the potential to persist in the environment and spread uncontrollably.

The paper shows that even when the gene editor intends only to make small changes through gene editing that do not involve introducing foreign genes, drastic unintended effects can result.

The Project Genetic Engineering and the Environment (FGU) website https://fachstelle-gentechnik-umwelt.de/en/home/