A Brief History of West Papua

The whole island of New Guinea is the ancestral land of the Papuans.

During the last ice age, until 8,000 years ago, New Guinea and Tasmania were part of a larger Australian continent, called Sahul (when I searched for a name in 1995, when preparing the document below, the only one I could find was Meganesia).

This simple detail of the ancient history of this land implies that the Papuans, as with the Tasmanian Aborigines, share a common ancestry, culture and land, going back maybe 60,000 years.

Do the western Papuans deserve a voice on whether they are part of Indonesia, or an independent nation?

My short history explores what happened, and how there is a never-ending war in New Guinea between Papuans and Indonesia, on-going since 1963.

The nations of Earth largely look away, as they did with East Timor, which was granted a vote one self-determination in 1999.

There was a vote on West Papuan self-determination in 1969, involving a selected group of 1,025 male elders, where they voted by stepping over a line drawn in the dirt. Being lectured under the shadow of guns was hardly a secret ballot.

Was that a proper vote on self-determination?

Why did the nations of the world accept that vote, and allow Indonesia to absorb half of New Guinea, and all western Papuans and their resources, a territory the size of France, into their nation?

The vote on self-determination in East Timor in 1999 included all adult men and women, and was run by the United Nations.

Why should the World treat West Papuans differently, only 30 years before?

Do the West Papuans have a right to a proper vote?

Then there is a point of comparison .....

Should Australia have retained colonial control eastern New Guinea, now Papua New Guinea, and done the same as Indonesia did in 1969, select 1,025 male elders, and tell them to step over a line drawn in the dirt, as the method of voting, for Australia to absorb the land, people and resources into the Australian nation?

If that approach was good enough for Indonesia in the eyes of the nations of Earth, then why not for Australia?

I welcome suggestion for improvements and additions to this document, including references.

Some suggestions can be added to this thread.

At some time, a new and improved edition could be published. 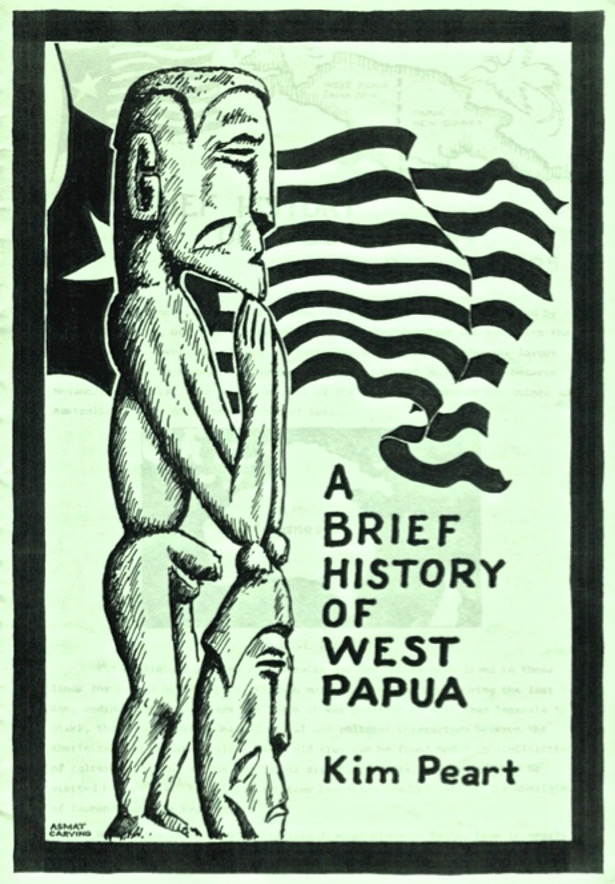 The front cover drawing is of Asmat carving from West Papua. 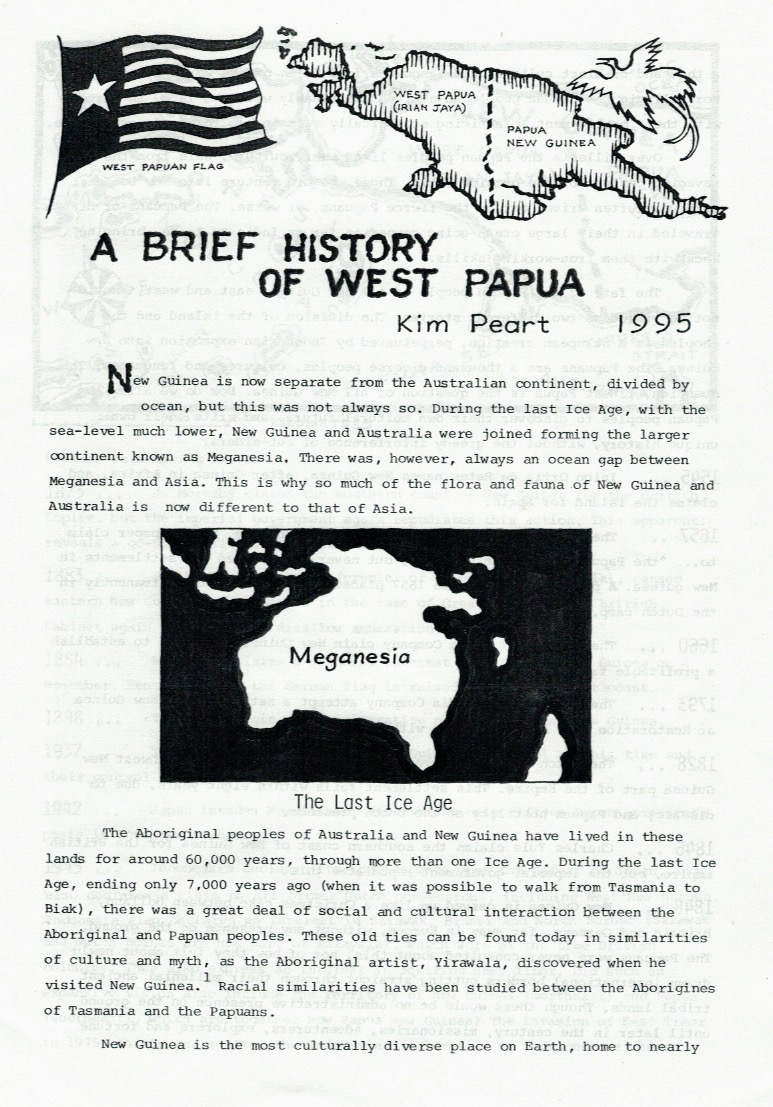 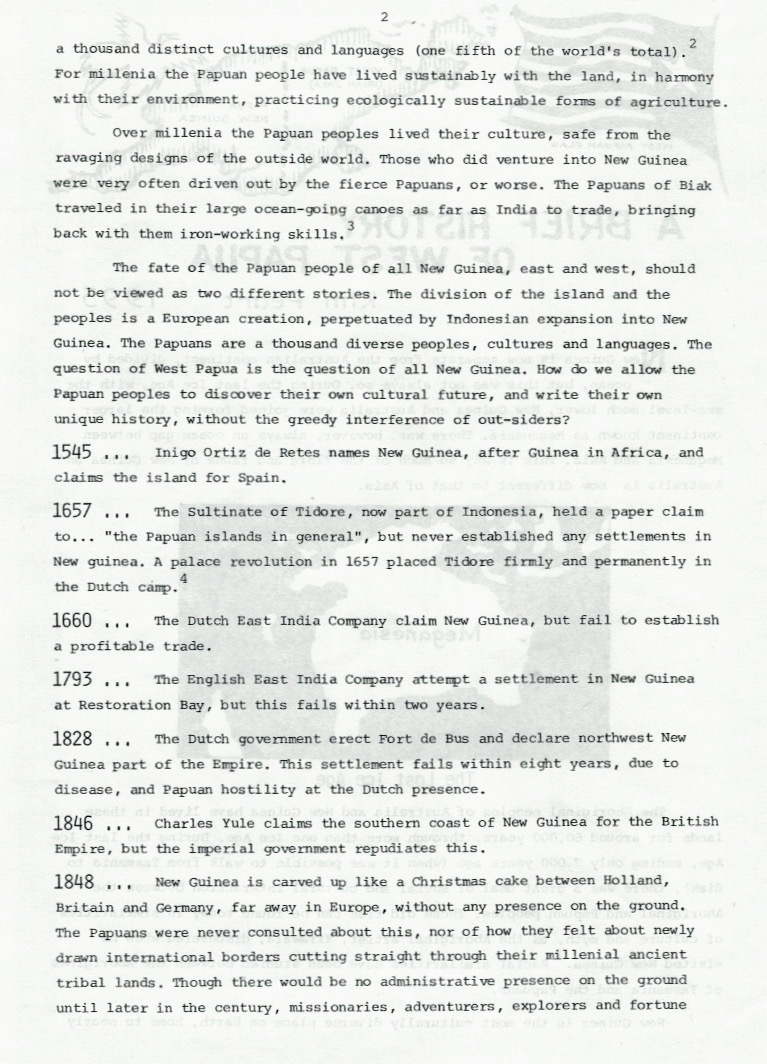 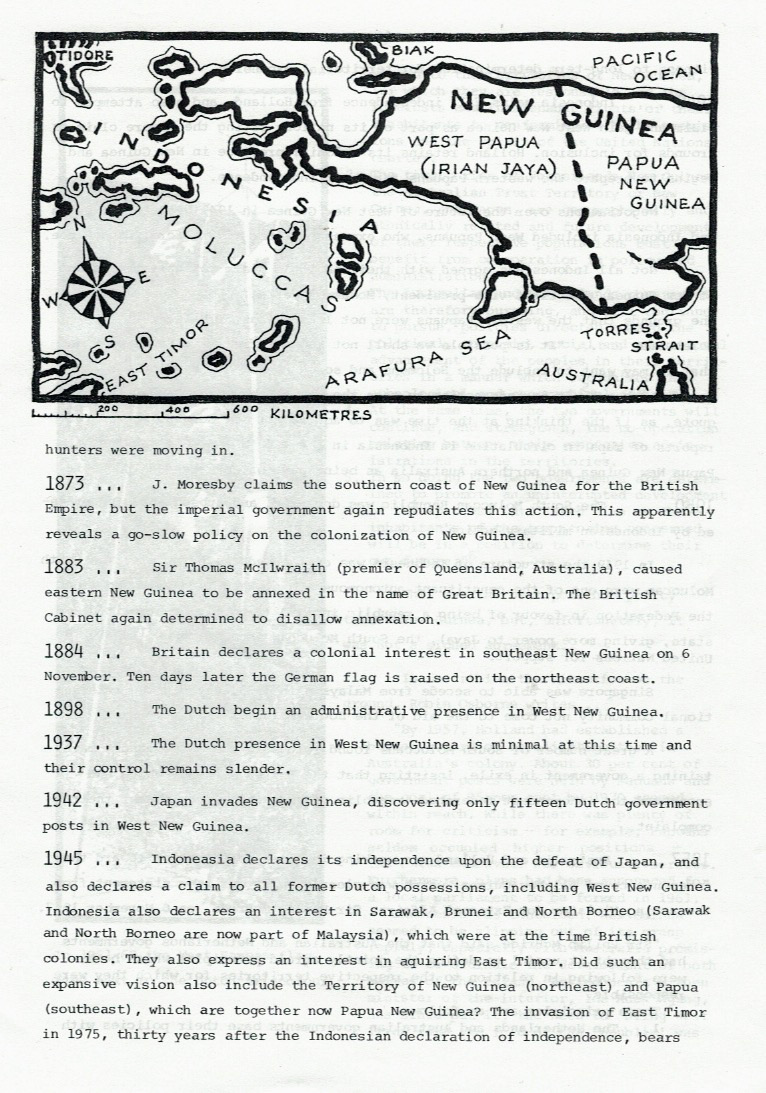 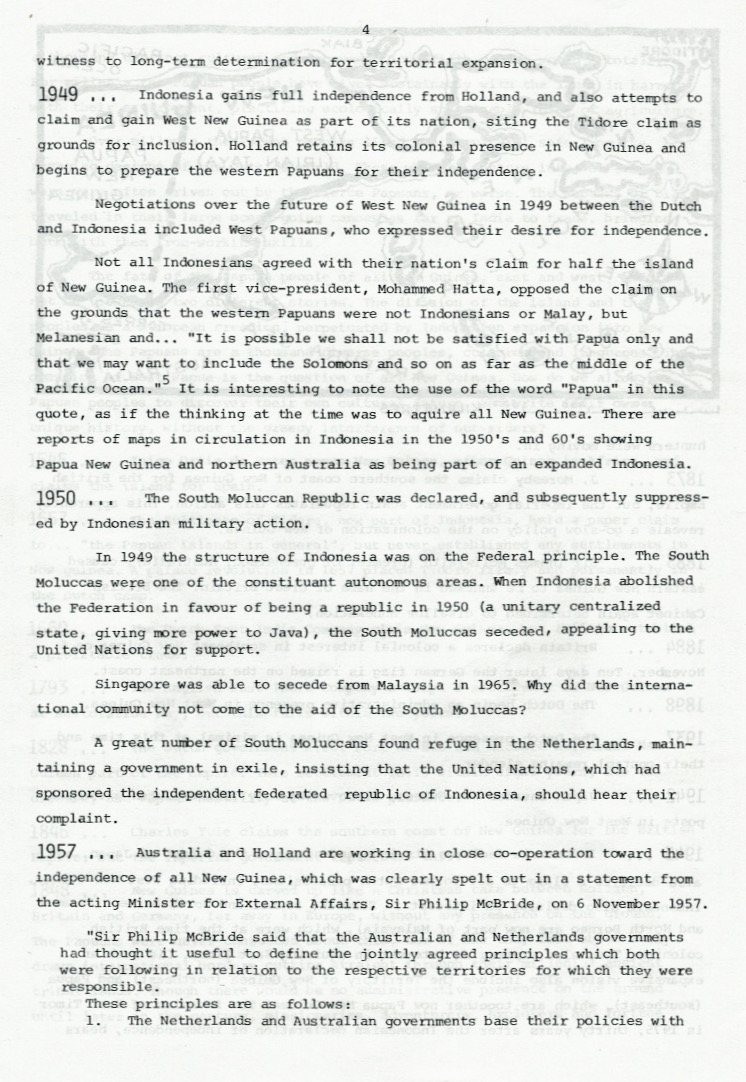 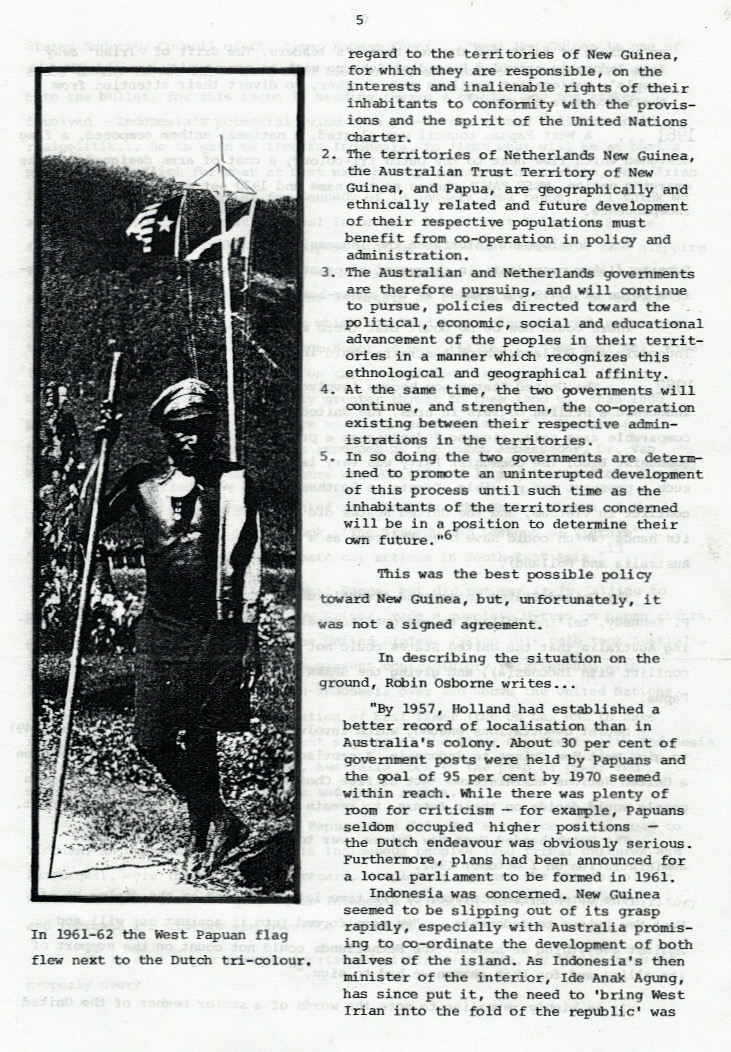 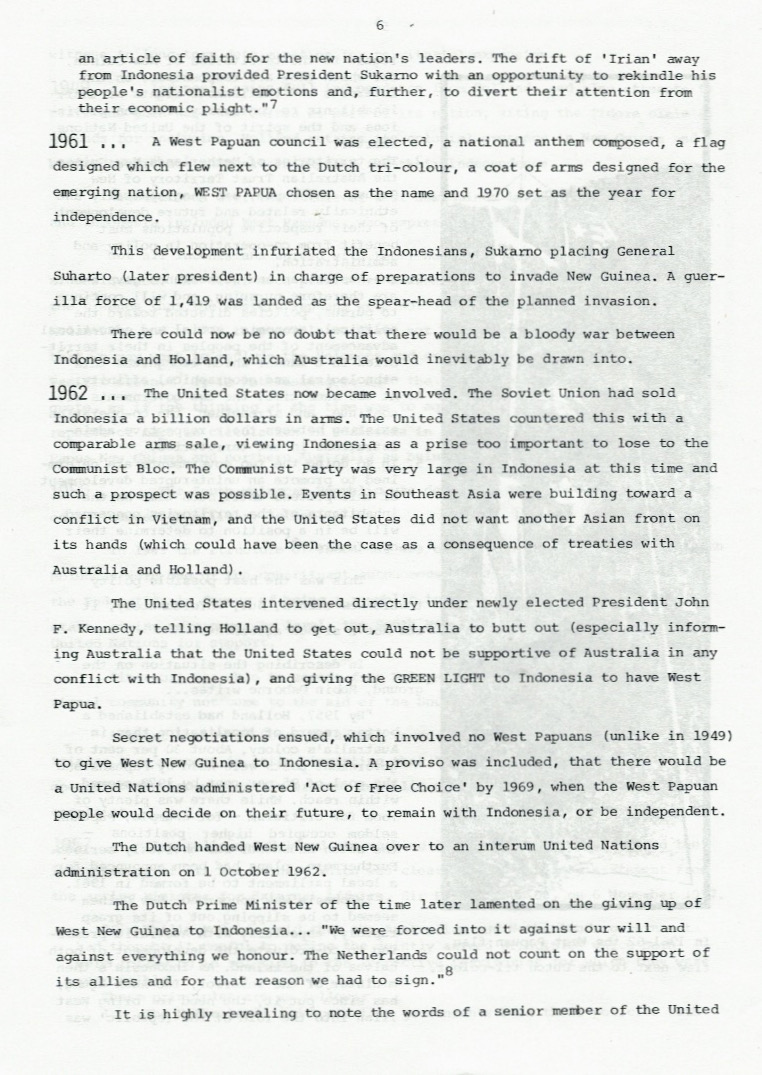 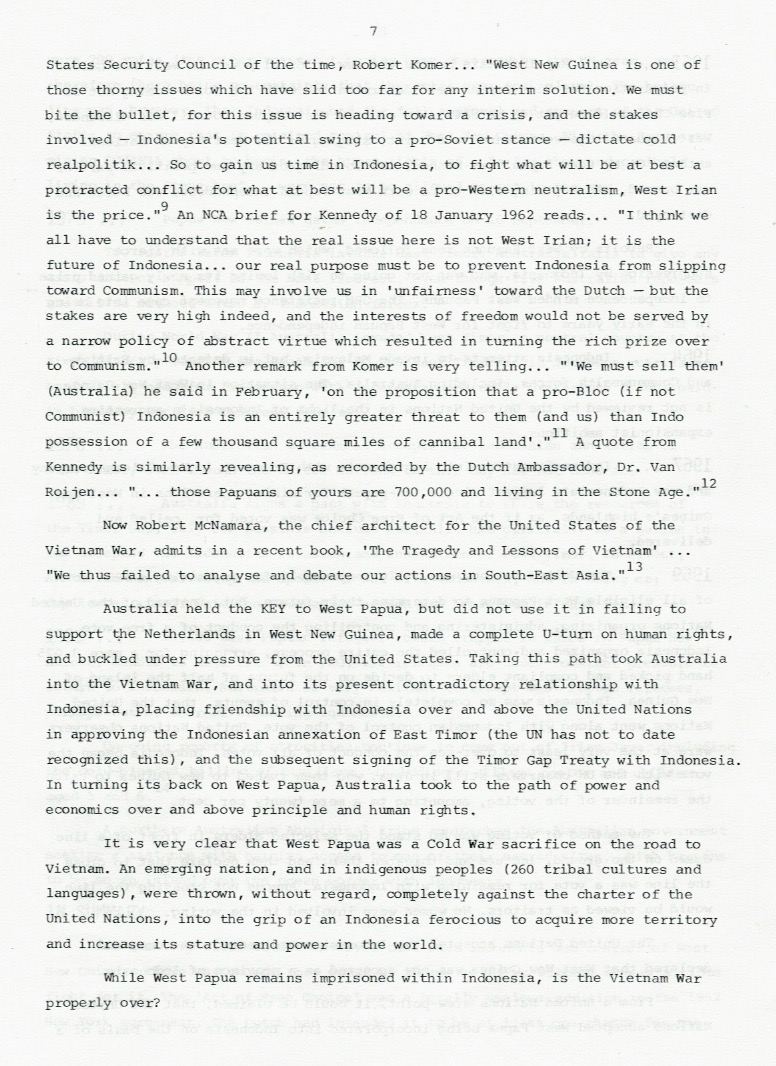 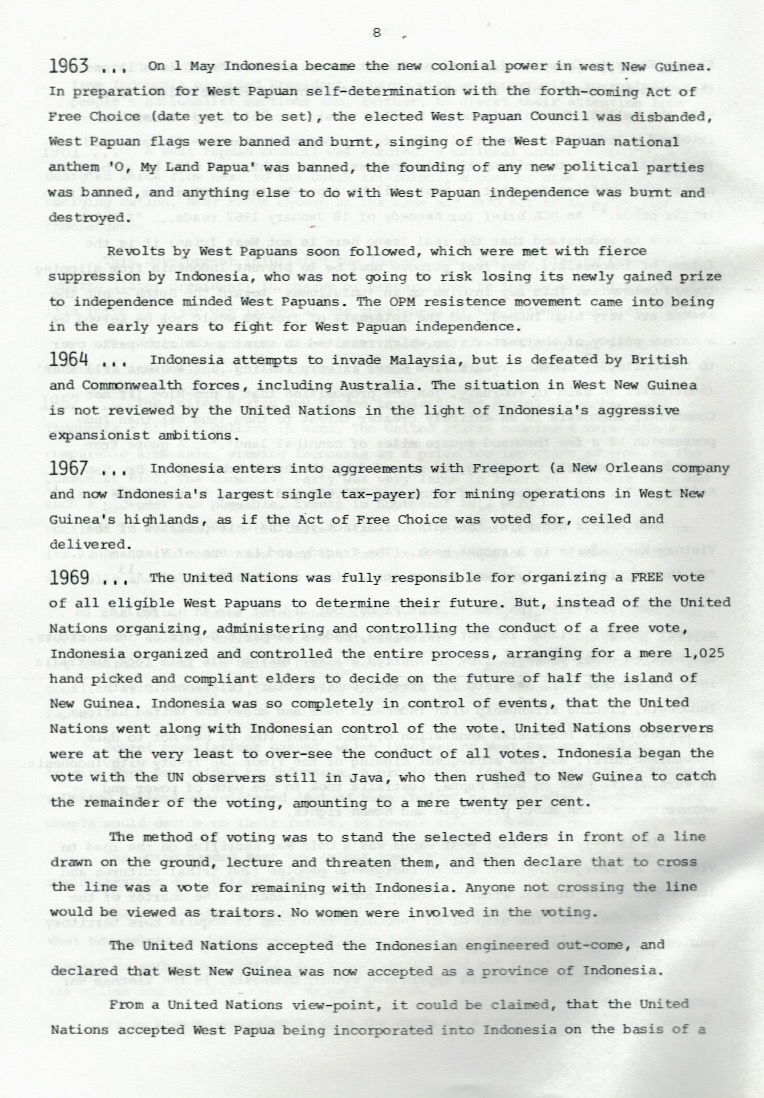 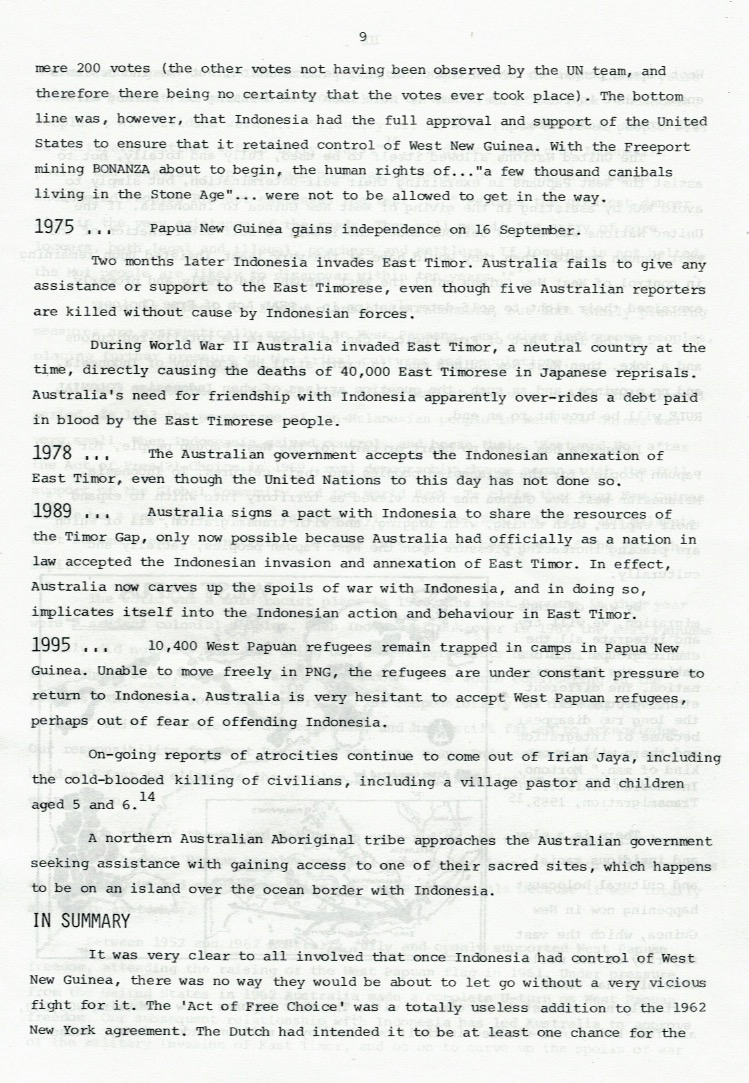 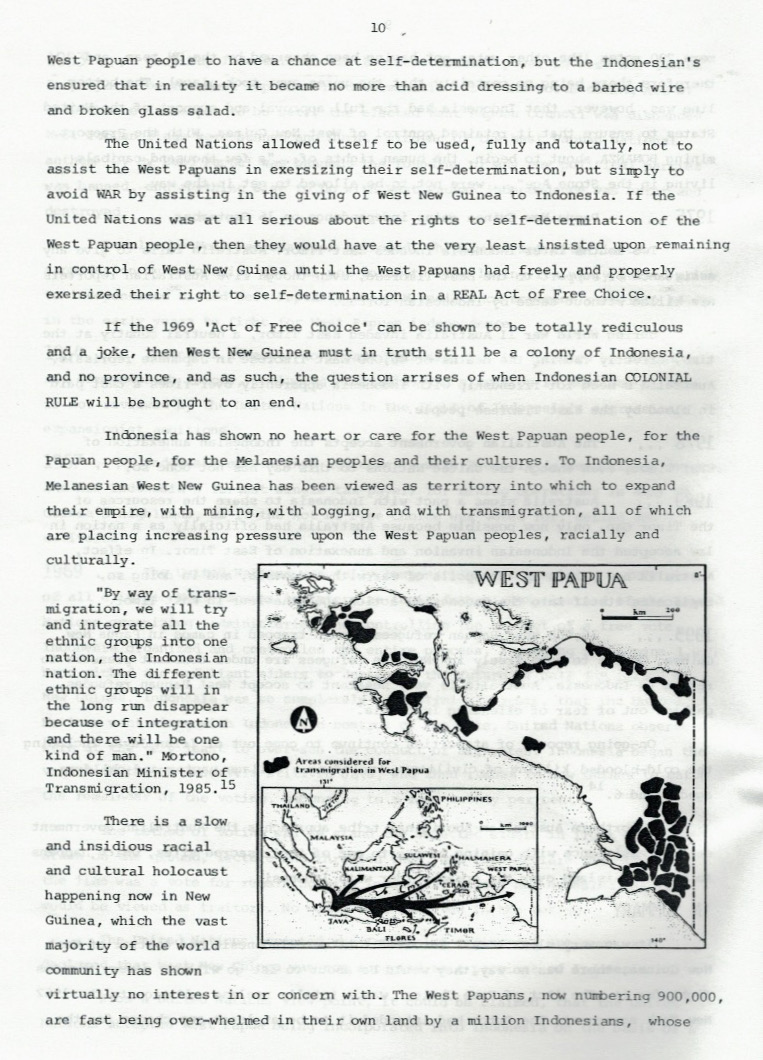 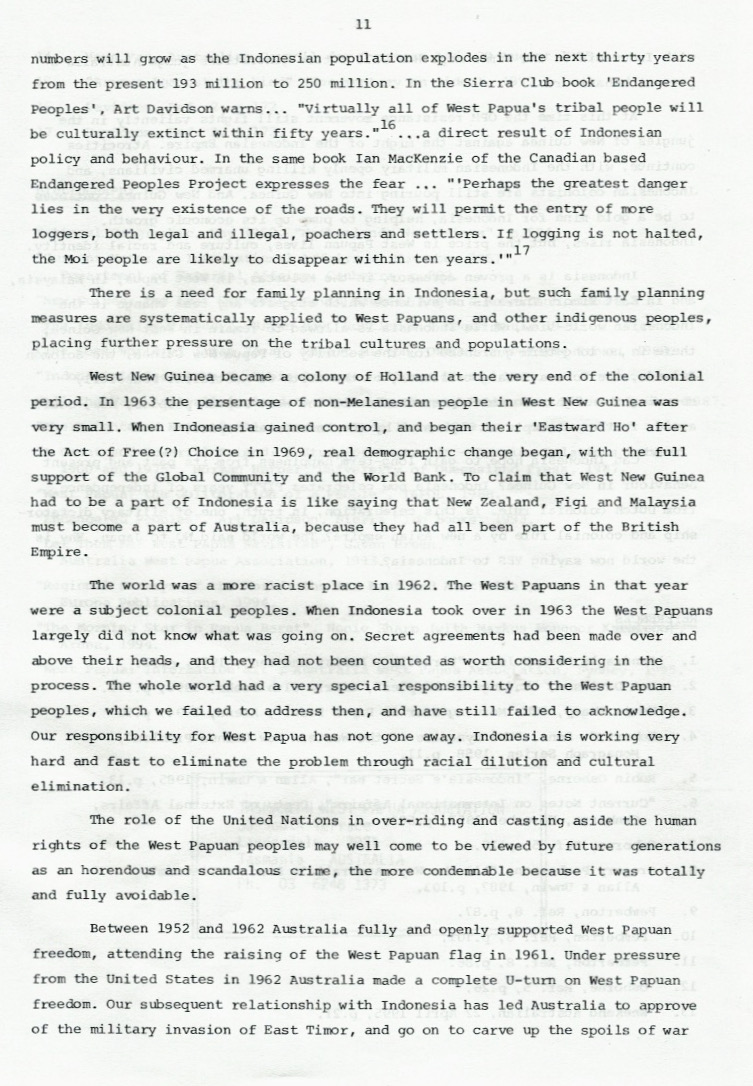 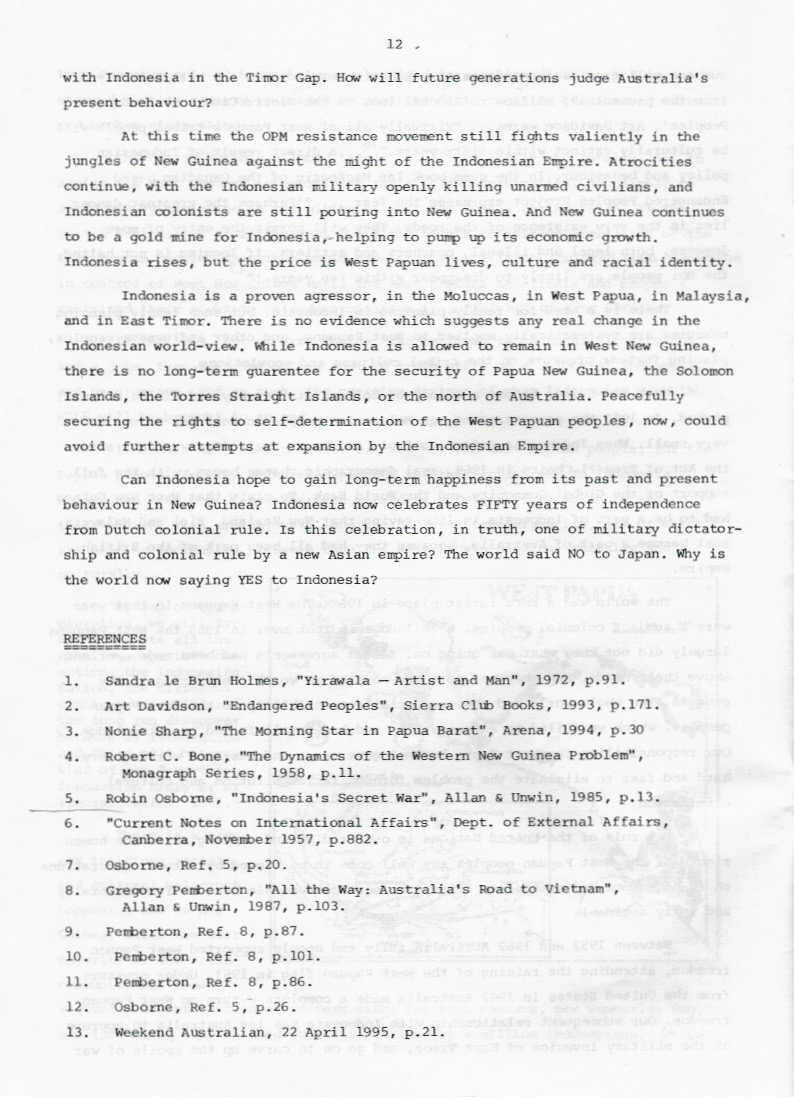 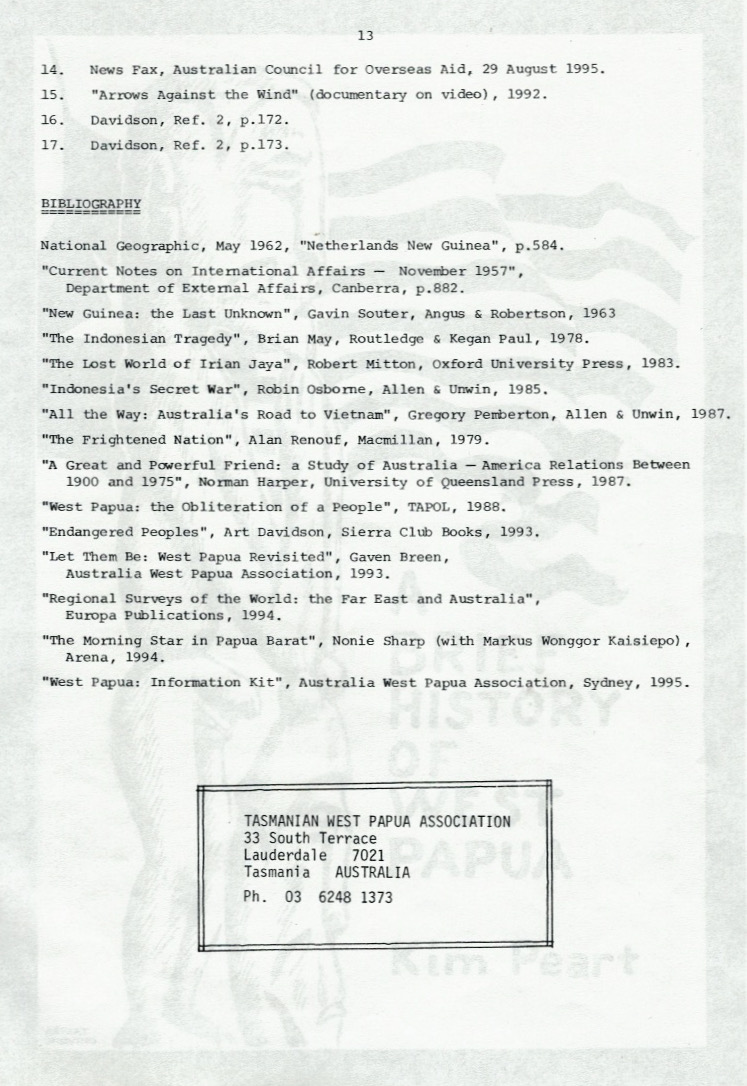 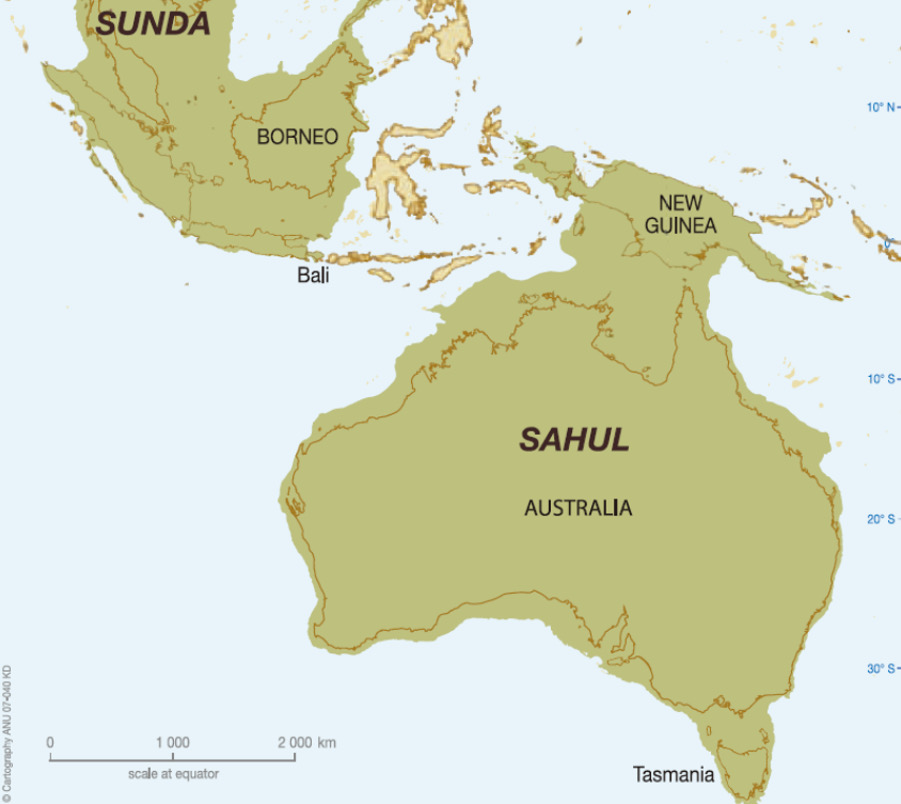 These two maps show how New Guinea and Tasmania were part of a larger continent during the last Ice Age. 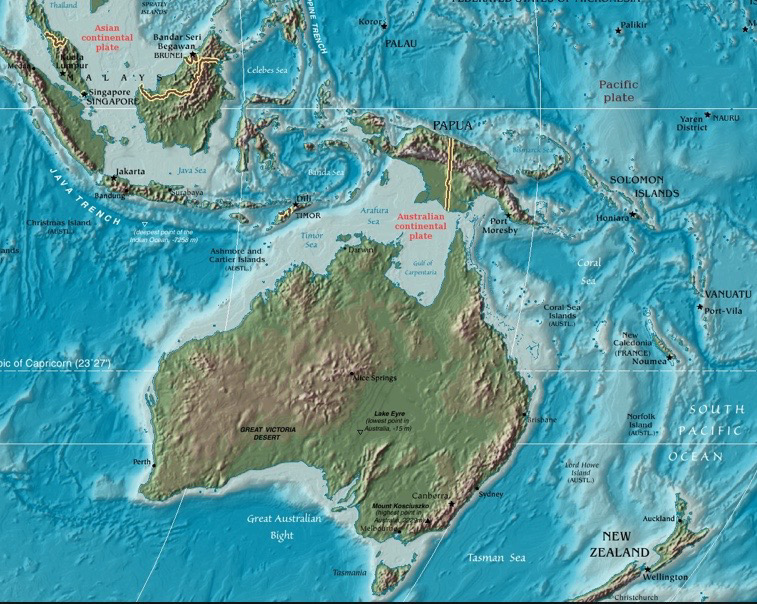 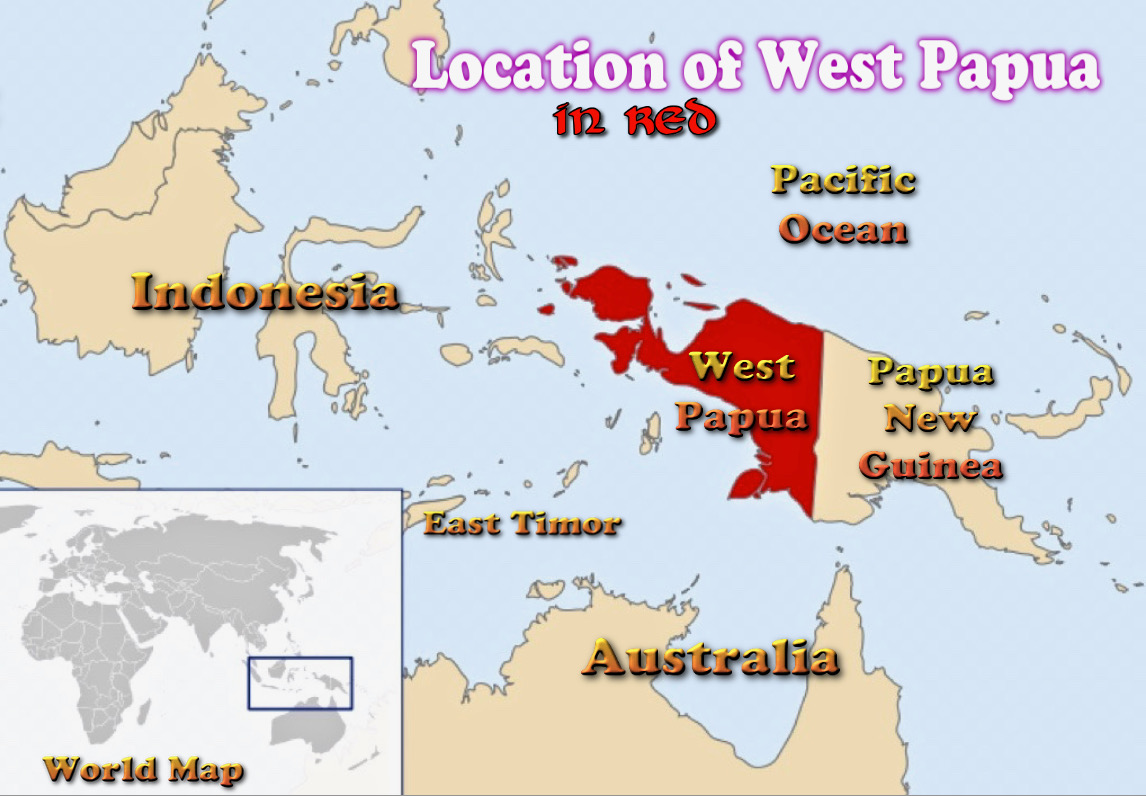 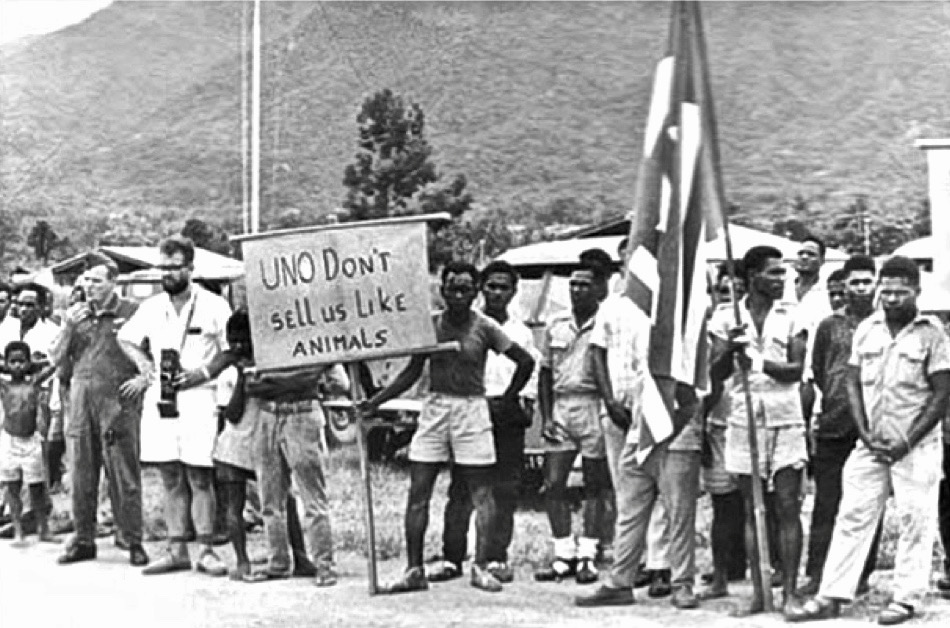 West Papuans attempted to make their voices heard in 1962, but the nations of the World were deaf to their cries. 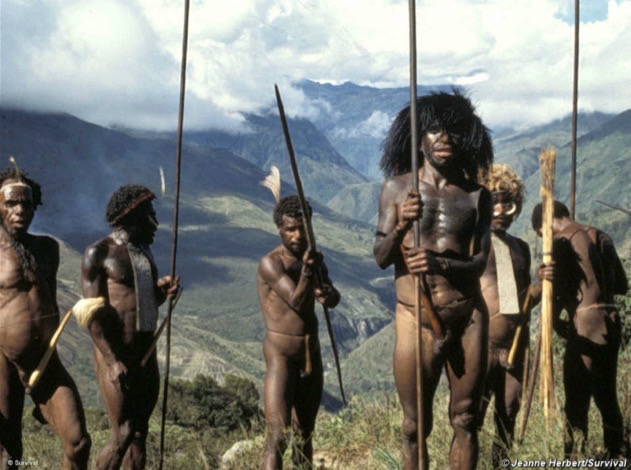 When Indonesia was allowed to become the new colonial power in New Guinea in 1963, there were large populations of Papuans in the mountains who were yet to be found. 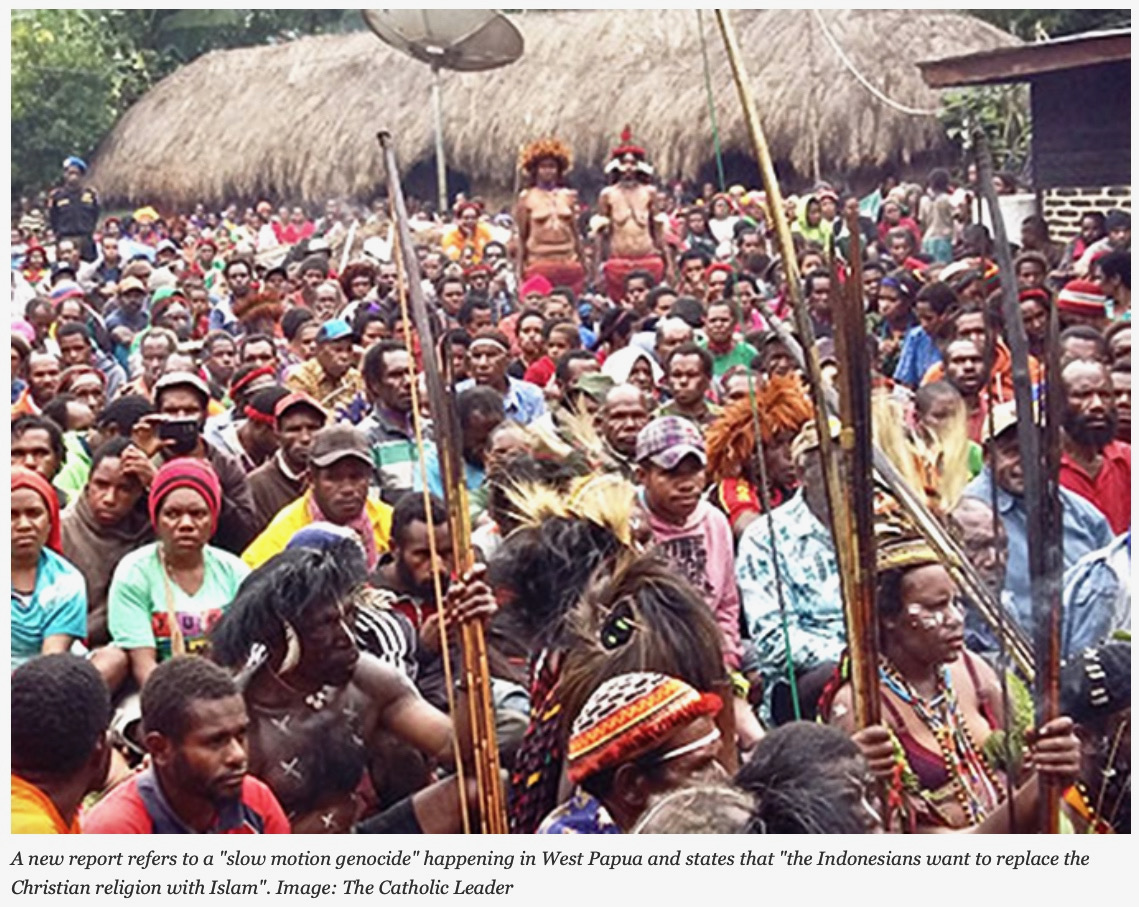 Raising the West Papuan flag can cause a Papuan to be shot on sight, or jailed for 20 years, and they still continue to voice their right to freedom. 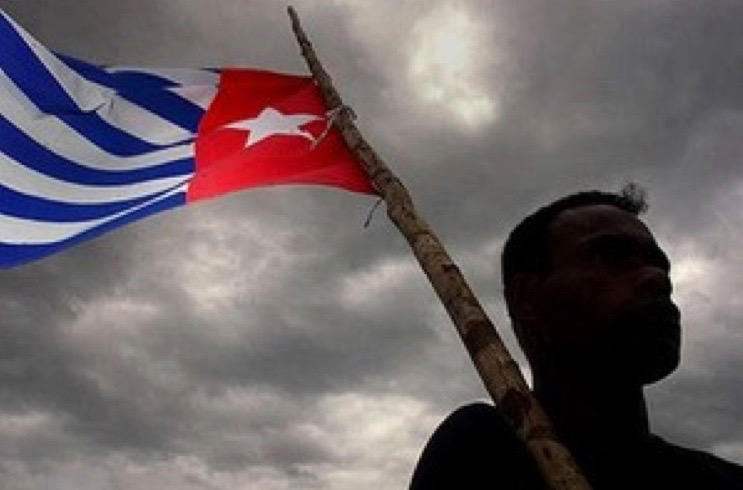 The morning star flag was first flown in West Papua in 1961, when 1970 was declared the year for West Papuan independence. 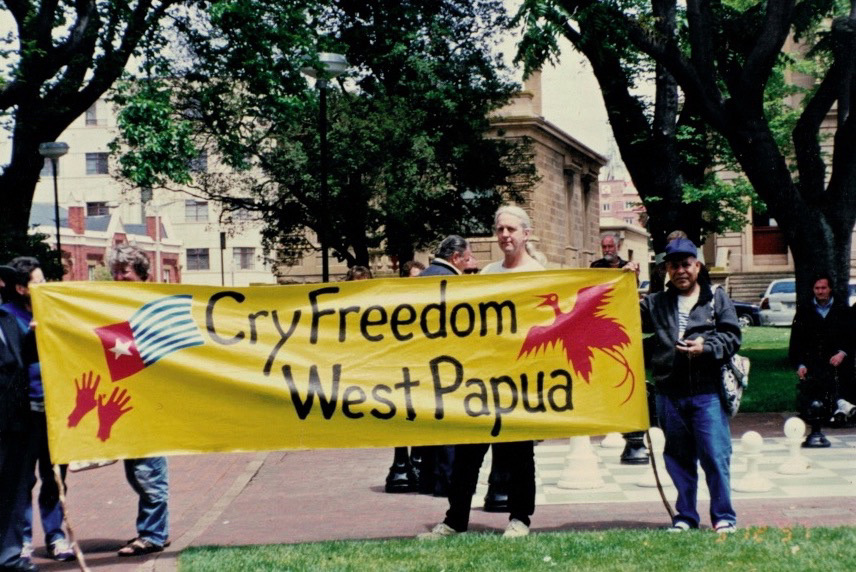 Rex Rumakiek, a West Papuan refugee visited Tasmania in 1997 to walk in a march through the streets of Hobart during Human Rights Week. Rex is on the right of the banner that I made, and Kim Peart is standing behind the banner next to Rex.

We later held the opening of an exhibition on West Papua that I had prepared, in the Hobart City Council exhibition area, opened by Tasmanian State politician Hon. John White MP, who saw my poem on West Papua, A Papuan Christmas, and asked for a copy of it. Parliament was sitting that night, and John spoke on West Papua and read out my poem in the house, which is now preserved in the Hansard of the Tasmanian Parliament.

Far away in Europe

the island of New Guinea

A quarter to the Germans

a quarter to the Brits

and half for the Dutch

Did anyone ask the Papuans

Did anyone say please?

Were they invited to the party?

Or was someone being mean?

Far away in Europe

half way round the world

the destiny of Papua

“Freedom from the yoke

freedom from the colonialist 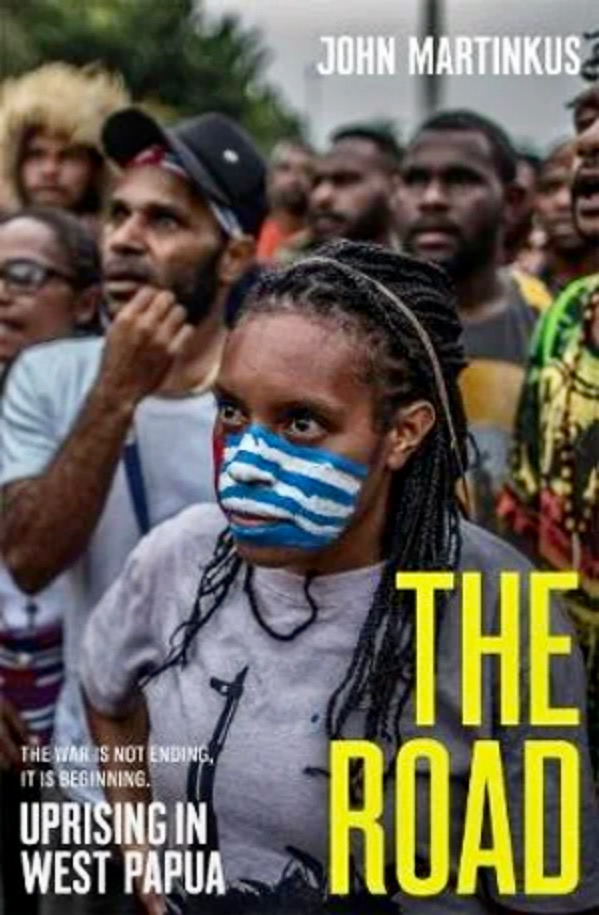 They all know the history; they have all grown up with the repression. They have grown up fighting. They have seen their leaders shot and jailed. They live with the military post on the corner. The searches, the document checks, the beatings, the arrests, the surveillance and the swaggering, casual violence of the Indonesian army and police. They all have one thing in common- an overwhelming desire to right a historic wrong.

The West Papuan independence movement has reignited, and Indonesian troops are cracking down. Chemical weapons have been deployed, hundreds of people killed, tens of thousands displaced - all on Australia's doorstep. And almost no one is writing about it.

In The Road, investigative reporter John Martinkus gives a gripping, up-to-date account of the province's descent into armed conflict and suppression. Replete with vivid detail, new information and photos not seen anywhere else, this revelatory work of journalism shows how and why a highlands road triggered an uprising, and where this might all lead.

John Martinkus is a four-time Walkley Award-nominated investigative reporter on the Asia and Middle East regions. His eyewitness account of East Timor's struggle for independence, A Dirty Little War, was shortlisted for the NSW Premier's Literary Awards. His books include Travels in American Iraq, Indonesia's Secret War in Aceh, the Quarterly Essay Paradise Betrayed- West Papua's Struggle for Independence and, most recently, The Road- Uprising in West Papua.