A group of Inuit hunters have braved nearly a week of freezing temperatures to blockade a remote iron mine in northern Canada, in protest over an expansion plan they say will harm local wildlife.

The blockade, which has prompted solidarity rallies in other Nunavut communities, has also exposed growing tensions between large Inuit organizations with the power to approve development permits – and residents of the small communities where the impact of such projects is felt.

Since 5 February, seven hunters have created a makeshift barrier of snowmobiles and sleds to block the airstrip and service road of the Mary River ore mine, halting operations. Temperatures in recent days have dipped to the low -30sC.

At issue are controversial plans drawn up by the mine’s operator Baffinland Iron Mines Corporation to double output. To bring 12m tonnes of iron ore to market, the mine has said it needs to build a railway to a port near the community of Pond Inlet.

But hunters have pushed back over fears that the expansion could threaten the populations of caribou and narwhal – two key sources of food – if approved.

“Baffinland is making money and we are given very little money and we know that money will not bring back wildlife,” Tom Naqitarvik said in an Inuktitut language video posted to Facebook, reported CBC News.

As the standoff enters its fifth day, 700 workers are stranded at the Mary River site, and according to the company, the blockade on the airstrip means food supplies cannot be delivered.

“Baffinland personnel have had numerous meetings with organizers, both at the blockades and in Pond Inlet, imploring the protesters to relocate off the airstrip and allow runway maintenance to take place and flights to resume,” the company said in a statement. “So far, these discussions have not yielded any progress.”

Baffinland says that expansion of the mine is critical for its operations in the region to stay profitable. It has tried to ease concerns over the project, saying it is confident wildlife will not be affected by increased ore shipments The company has also touted more than C$2bn in royalties paid to Inuit over the mine’s 30-year lifespan. 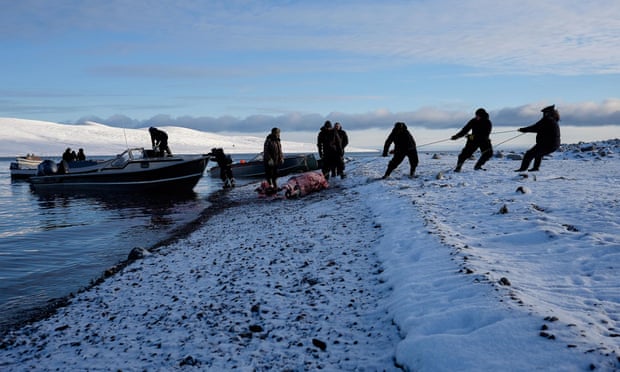 Hunters pull up the carcass of a hunted narwhal a few miles from the hamlet of Clyde River. The small whale provides food for the community, which is heavily reliant on hunting as the main source of food. Photograph: Leyland Cecco

Under the landmark 1993 Nunavut Agreement, which established a number of key rights Inuit on their lands, Baffinland is required to negotiate a benefit agreement with the Inuit groups that represent residents of the territory.

But the protest has also drawn attention to long-simmering tensions between remote Inuit communities and those organizations, which some residents say have lost touch with the challenges of living in remote communities.

After years of feeling overlooked and ignored by decision-makers in the territorial capital of Iqaluit, northern communities are looking to form their own, legally recognized association, said Jerry Natanine, mayor of Clyde River. This new group would have the power to negotiate royalty payments and have greater say over projects that could affect their communities, he said.

“The decision comes from years of disappointment from Inuit organizations that don’t look out for our behalf,” he said. “We’ve been dreaming about the possibility of creating something that could help us benefit from the development that is happening and running our own government.”

Many of the groups opposed to the project are not opposed to all mining in the region. “My brother and cousins work at the mine. I don’t want them to lose their jobs,” said Natanine. “But the mine doesn’t consider our ideas. We told them to change the railway location and we would accept it. We told them, ‘Take this route instead.’ But they just shoved us off.”

Despite demands from those at the blockade for a new royalty structure, Baffinland has said it has no legal authority to negotiate with community groups.

Residents of Clyde River plan to bring supplies to the Mary River protesters in the coming days, a journey that could take three days by snowmobile and requires travellers to brave mountain valleys and perilous sections of ice.

“At the end of the day, the expansion project was imposed on us. Even so, we’ve been clearly and repeatedly telling the mine that their plans were unacceptable. And they haven’t listened to any of our suggestions,” Natinine said. “So now we’re left fighting for our culture and way of life.”

Inuit Hunters Braved -30 C Weather to Block an Iron Mine

Hunters say the mine's expansion will further push away already scarce wildlife. Baffinland Iron Mines said on Thursday that the blockades came down and conversations are pending.

Braving temperatures as low as -36 C, a group of Inuit hunters spent a full week blockading  an iron ore mine in Nunavut in northern Canada, in an attempt to protect animals from further harm.

Baffinland Iron Mines has proposed an expansion to its Mary River open pit project in the Qikiqtani region, or Baffin Island, that will allow the site to produce 12 million tonnes of ore per year—double its current capacity. The expansion, currently under review, will include a new railway for transporting ore to its shipping port.

The hunters say increased production and traffic will further drive away already scarce wildlife, including caribou and narwhal, that people depend on for food.

The situation has also further convinced Qikiqtani Inuit communities to form their own independent governing body after those representing them failed, said Jerry Natanine, the mayor of Clyde River, a Baffin Island hamlet.

“We would like to see actual negotiations with the most impacted communities and have us involved right away,” Naymen Inuarak, one of the hunters, told Nunatsiaq News. Nearby communities have “been ignored way too long,” he said.

Late last Thursday, after travelling on snowmobiles for two days, seven hunters from Arctic Bay, Igloolik, and Pond Inlet arrived at the mine and set up blockades using their vehicles and sleds. More hunters joined in the following days, with 12 occupying the sites in total.

On Thursday afternoon, Baffinland Iron Mines said the blockades were removed. “We welcome the move to a constructive dialogue and hope to work in collaboration with our community partners to find mutually agreeable solutions to the issues that have been raised,” Baffinland CEO Brian Penney said in a statement.

A spokesperson for the hunters, Marie Naqitarvik, confirmed the disbanding with Nunatsiaq News, saying they’re now gearing up to engage in face-to-face conversations with Inuit groups and community leaders.

The fly-in site’s tote road and air strip were still blocked today, and more than 700 workers were stuck at the mine, according to a Baffinland statement. “Many of the people working at Mary River have been on site for 21 days now and they are not being allowed to leave, nor are food and supply flights being allowed to land,” Tuesday’s statement says.

Nunavut MP Mumilaaq Qaqqaq has been in talks with land defenders, Baffinland, and the Minister of Northern Affairs to find a sustainable solution that works for everyone.

“Land guardians are willing to allow planes to land for medical evacuations, and to let employees go home after their shifts are done.” she added.

The mining company has repeatedly said it respects the right to peaceful protest, but on Wednesday, it requested a court injunction from the Nunavut Court of Justice in Iqaluit to force the hunters off the site. A hearing will be held on Saturday, according to the Globe and Mail.  Pond Inlet Mayor Joshua Arreak sent a letter on Wednesday asking representatives to meet as soon as possible, so that the hunters' concerns can be heard.

“There is urgency in dealing with this,” the letter says. “Once an injunction is granted, the RCMP are likely to move quickly to end the blockade.” (Indigenous land defenders across the country have repeatedly experiencedviolence at the hands of the RCMP.)

The hunters, having garnered support from residents across Nunavut, say they won’t leave until their demands are heard.

“I don't think this is extreme, this is our land—our home—being destroyed and we have to think about our future—our children. It is for them," Inuarak told CBC News in Inuktitut.

Throughout hearings for the expansion, locals repeatedly offered solutions to make the mine expansion safer for wildlife, but they were “completely ignored,” Natanine said.

One concern is that the new railway will disrupt a route used by caribou and will sit too close to waterways that house Arctic char, Natanine said. Residents have suggested alternate paths for the railway, to no avail, he said.

Baffinland did not respond to VICE World News requests for comment, but has previously said it promised to protect animals. 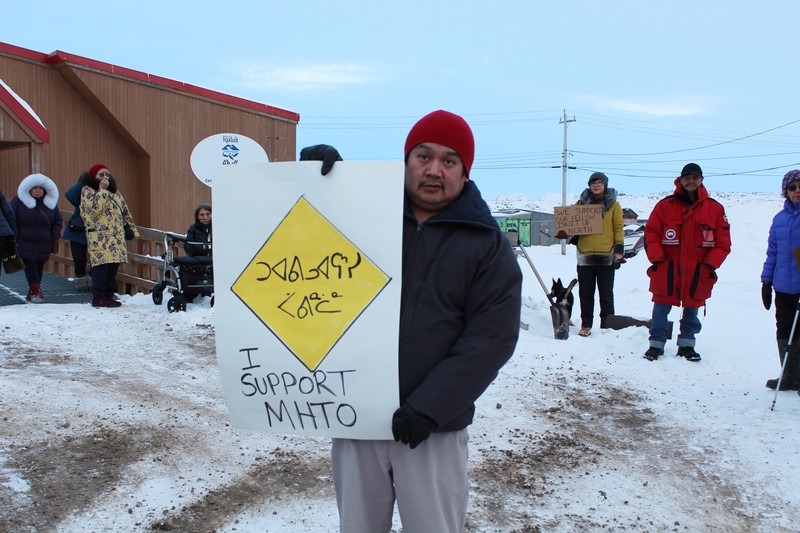 ABRAHAM KUBLU, WHO GREW UP IN POND INLET, STANDS OUTSIDE THE ELDERS QAMMAQ IN IQALUIT, ON TUESDAY, JAN. 8, 2021, AS PART OF A GATHERING TO SUPPORT HUNTERS FROM POND INLET AND ARCTIC BAY WHO ARE PROTESTING AT THE MARY RIVER MINE. THE CANADIAN PRESS/EMMA TRANTER

Ever since the blockades forced the mine halt operations, Natanine said hunters and their supporters have noticed more ptarmigans than usual over the past week. Ptarmigans are basically an Arctic “chicken,” Natanine said.

When the animals disappear, so does Inuit identity and culture, Natanine said.

These aren’t new problems either. He said the mine has caused problems since it first opened in 2014. “It’s unbelievable how much animal catches have come down these last few years,” Natanine said.

QIA declined VICE World News’ request for comment, but will be releasing a public statement soon, said spokesperson Will Hopkins.

Baffinland has said it doesn’t have the authority to treat the organization like it would the QIA.

“For a long time now we’ve been wanting to start our own Inuit association, so that we can control our own affairs and run our own government and do things the way we want to do them,” Natanine said.