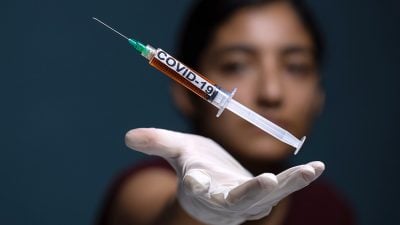 Alarming News. In Germany the Parliament (Bundestag) ratified on 29 January 2021, the implementation of Agenda ID2020.

This is a centralized general electronic data collection of every citizen to which every government agency, police – and possibly also the private sector would have access.

It covers all that is known about an individual citizen, now up to 200 points of in formation and possibly more as time goes on, from your bank account to your shopping habits, health records (vaccination records, of course), your political inclinations, and probably even your dating habits and other entries into your private sphere.

Agenda ID2020 was designed by Bill Gates as part of the “vaccination package”. It is backed by the Rockefeller Foundation, Accenture, the WEF and GAVI (Global Alliance for Vaccines and Immunization, now simply called the Vaccine Alliance), also a Gates creation (2001), with HQ in Geneva, Switzerland.

GAVI is located next door to the WHO. GAVI is called a public private partnership,

The public part being WHO, plus a number of developing countries;

The private partners are, of course a series of pharmaceutical companies, i. e. Johnson & Johnson, GlaxoSmithKline, Merck & Co. … and the Bill and Melinda Gates Foundation.

The German extra-governmental Corona Commission, consisting of hundreds of medical doctors, virologists, immunologists, university professors – and lawyers, including Dr. Reiner Füllmich, co-founder of the Commission, has special concerns that the current Corona-Vaccines (Pfizer, Moderna), may include nano-particles that could be accessible to electro-magnetic radiation, i. e. 5G and the subsequent 6G.

This is precisely what was foreseen in the design of Agenda ID2020, in which Bill Gates and GAVI had a major role, and in which case the ID2020 might be vaccine-implanted and be remote-accessible by EM-geared computers, robots or algorithms (see, in German “Wirkungsweise und Gefahren der aktuellen Corona-Impfungen in Deutschland mittels mit Nanopartikeln umhüllter mRNA-Impfstoffe – Corona Ausschuss Germany 37th Conference” (31 January 2021)

The adoption of Agenda ID2020 still has to be approved by the German Federal Council, but there is little chance the Council will reject it.

Similarly, in Switzerland, Agenda ID2020 – an all-electronic ID – linking everything to everything of each individual citizen will come to a popular vote on 7 March 2021.

And that’s not all, the Swiss government wants to outsource management of Agenda ID 2020 to the private sector — unbelievable!!! – You imagine a bank or insurance company dealing (and selling) your data!!!! — Just imagine what will happen with your personal information – unthinkable.

In the longer-run – who knows how long – as foreseen by Bill Gates, the properties for an electronic ID – i. e. an electromagnetic field (EMF) – will be implanted in your body, either along with a vaccine – maybe it’s already happening with the covid jabs, or separately in the form of injectable nano-chips.

Early trials were carried out mid-last year in school classes of remote villages in Bangladesh.

With the complacent Swiss being what they are, it is very possible if not likely that the government’s proposal will be accepted on 7 March. Then what?

Is this the beginning of adopting the all-digitized Agenda ID2020 throughout Europe, the world?

Or – maybe other EU countries have already quietly and secretly – no questions asked – envisaged inserting the Agenda ID2020 in their Constitution.

The Coronavirus COVID-19 Pandemic: The Real Danger is “Agenda ID2020”

Once every citizen on the planet – according to Bill Gates – about 7 billion-plus will be ID-chipped, the control of a small globalist elite will be close to total.

With an electromagnetic field and with 5G / 6G EM-waves allowing inputs and access of data in your body – the control of each individual is almost complete. The “almost” refers to the planned access to your brainwaves.

This is supposed to be happening through a Brain Computer Interface (BCI), called Neurolink (https://neuralink.com/) – developed by Elon Musk. (see video)

It presents an interface of electronic waves with the human brain which, by then, will have been converted into an electromagnetic field (EMF), so that it can receive digital commands that will influence our behavior, or can be turned off – RIP – as may be is most convenient for the Global Cabal.

Let’s not let this happen.

Peter Koenig is a geopolitical analyst and a former Senior Economist at the World Bank and the World Health Organization (WHO), where he has worked for over 30 years on water and environment around the world. He lectures at universities in the US, Europe and South America. He writes regularly for online journals and is the author of Implosion – An Economic Thriller about War, Environmental Destruction and Corporate Greed; and  co-author of Cynthia McKinney’s book “When China Sneezes: From the Coronavirus Lockdown to the Global Politico-Economic Crisis” (Clarity Press – November 1, 2020).

Peter Koenig is a Research Associate of the Centre for Research on Globalization.

On Jan. 29, the German parliament ratified the implementation of Agenda ID2020, the next phase of the global Mark of the Beast rollout being ushered in on the back of the Wuhan coronavirus (COVID-19) “pandemic.”

This centralized general electronic data collection program will profile every citizen in Germany and grant access to every government agency, police department, and three-letter agency, as well as to the private sector.

Up to 200 points of information, and possibly more as time goes on, will be included in the program. These include people’s bank accounts, shopping habits, health records, including vaccination records, political inclinations, and probably even dating habits.

If the government can use it against you, Germany wants to house it in the Agenda ID2020 database, which was designed by none other than billionaire eugenicist Bill Gates as part of his “vaccination package.”

Backed by the Rockefeller Foundation, Accenture, the World Economic Forum (WEF), and the Global Alliance for Vaccines and Immunization (GAVI), the program aims to inject every human being with microchips that can be remote-accessed using 5G and subsequent 6G technologies.

The program’s private partners include many Big Pharma names such as Johnson & Johnson (J&J), GlaxoSmithKline (GSK), Merck & Co., and of course the Bill & Melinda Gates Foundation.

According to Peter Koenig, writing for Global Research (Canada), ID2020 is shaping up to be “vaccine-implanted” and “remote-accessible by EM-geared computers, robots or algorithms.”

“The adoption of Agenda ID2020 still has to be approved by the German Federal Council, but there is little chance the Council will reject it,” Koenig explains.

In nearby Switzerland, voters will have the chance on Mar. 7 to approve that country’s version of Agenda ID2020, an all-electronic identification system that will link “everything to everything of each individual citizen.”

Should the measure pass, the Swiss government plans to outsource management of the program to the private sector, meaning drug companies, big banks, and insurance companies will be buying and selling people’s private data for profit.

In the future, the program will likely include an implantable chip with built-in radiofrequency (RF) transmitters that will be used to track people, as well as manage their finances and allot them payment credits for the work they do so they can continue to buy and sell.

Early trials of such technology have already taken place in remote villages of Bangladesh, where poor people were injected with microchips under the guise of being “vaccinated.”

This is exactly the type of thing that Bill Gates and other genocidal maniacs want to see implemented around the world. Every person will eventually have to be ID-chipped and “vaccinated,” and the 5G / 6G systems being installed on every church rooftop and corner lamppost will be used to program and control this global herd of new world order beings.

All of this is for the purpose of keeping people “safe” against Chinese germs, of course. There is simply no other way to keep the “virus” at bay, the elite insist.

“With an electromagnetic field and with 5G / 6G EM-waves allowing inputs and access of data in your body – the control of each individual is almost complete,” Koenig warns. “The ‘almost’ refers to the planned access to your brainwaves.”

“This is supposed to be happening through a Brain Computer Interface (BCI), called Neurolink – developed by Elon Musk. It presents an interface of electronic waves with the human brain which, by then, will have been converted into an electromagnetic field (EMF), so that it can receive digital commands that will influence our behavior, or can be turned off – RIP – as maybe is most convenient for the Global Cabal.”

Sources for this article include:

More of the latest news about the Wuhan coronavirus (COVID-19) vaccine scam can be found at Pandemic.news.

UPDATE to the article below:

There are 179 countries listed with a forecast for 2025 that show some dramatic changes. E.g. the population in Germany - according to their prediction - will see a 65% decline from >80 million to 25 million during the next 4 years!

In 2015 they only foresaw a decline to slightly above 45 million in 2025. What is the cause for the more dramatic prediction?

The DEAGEL website says it is non-profit, built on spare time and provides information and services AS IS without further explanations and/or guarantees. They say: "We are not linked to any government."

Remember that the fall of the Berlin wall and the German reunification was predicted by U.S.American sources at a time when in Germany nobody thought this was possible - neither in East nor in West Germany. Similar predictions foresaw the fall of the Soviet Union.

Deagel.com, a military equipment and civil aviation guide website, is causing a buzz on the Internet for its dire forecast that in a mere 10 years, by the year 2025, the United States would be unrecognizable, a shadow of its former self. Specifically, the U.S.’s:

What is Deagel.com? Wikipedia does not have an entry on Deagel.com. This is what the precious metals website Silver Doctors says about Deagel.com:

Here’s a screenshot of Deagel.com‘s home page (click to enlarge):

In a statement about its forecast, Deagel.com claims that:

Here’s Deagel.com‘s statement in its entirety:

The United States isn’t the only country for which Deagel.com has a dire forecast. Here are some other countries that will experience drastic population losses:

Countries that will increase in population include:

Silver Doctors writes: “I leave it up to the reader to decide whether or not this is a legitimate forecast from a legitimate organization. […] But, having said that, I have 100% conviction that the U.S. is heading toward a devastating financial and economic collapse that will trigger massive social upheaval and civil unrest. What just happened in Baltimore is small taste of what that will look like.”

Here are my critique and analysis: