Lockdowns are not needed to deal with SARS-Cov-2

The following is the text of a study by Prof Isaac Ben-Israel, first published on April 16, 2020. (Ben-Israel discussed his research on Israeli TV on April 13, saying that simple statistics show the spread of the coronavirus declines to almost zero after 70 days — no matter where it strikes, and no matter what measures governments impose to try to thwart it.)

The following article aims at examining the development of the coronavirus disease in Israel since its inception 56 days ago (8 weeks).

It turns out that the peak of the virus’ spread has been behind us for about two weeks now, and will probably fade within two more weeks.

Our analysis shows that this is a constant pattern across countries. Surprisingly, this pattern is common to countries that have taken a severe lockdown, including the paralysis of the economy, as well as to countries that implemented a far more lenient policy and have continued in ordinary life.

The data indicates that the lockdown policy can be stopped within a few days and replaced by a policy of moderate social distancing.

A new concept has entered our lives: an exponential growth, that is, a geometric rate growth. If indeed the corona spreads according to an exponential growth, Israel would have experienced double the amount of patients every few days. Essentially, the data of additional new infected
cases would have to show growth at accelerating rate. Does this happen in reality? The following study will examine this question.

As of today, which marks the 56th day since the first patient was discovered in Israel, the number of known patients has increased from 1 on February 20, to 12,758 on April 16th. Had the increase really been exponential?

The following chart provides a description of the daily increase in the number of new patients in Israel (the horizontal axis is the timeline in days since the first patient was discovered). Even one who does not possess a mathematical background can learn from the graph that the added number of patients per day does not increase at a constant rate, and therefore the growth is not exponential. 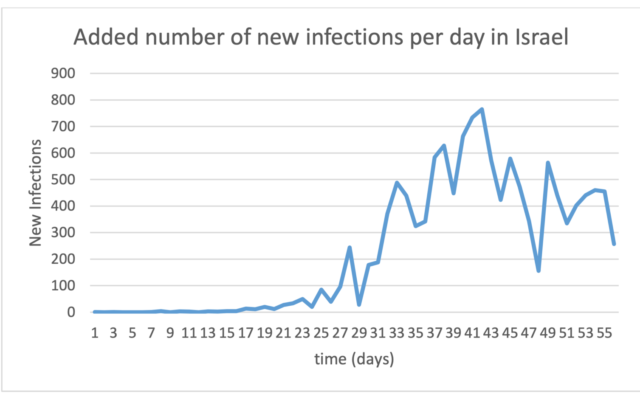 The graph above shows that the increment of new patients per day peaked (around day 41) to about 700 more patients a day, has since begun to fade.

The time required to double the number of patients has dropped from 2-4 days at the beginning to some 30 days today, and it continues to decrease (see the following graph): 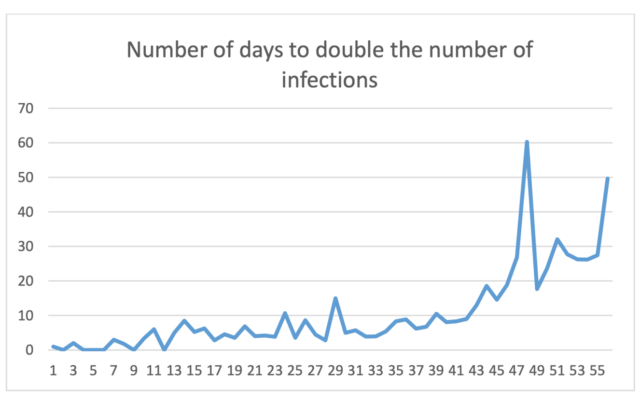 Another way to look at the decline of the disease is to look at the daily additional infections relative to the total number of infections, that is – the percentage of new infection per day. The following charts shows this: 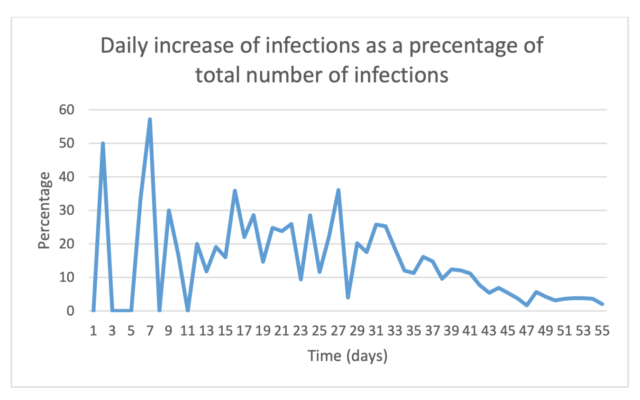 Summary thus far: In the first 4-5 weeks since the disease was discovered in Israel, there was indeed an exponential increase of infections, but since then it has begun to moderate.

The number of added daily patients peaked about six weeks after the disease was discovered and since then it has been in constant decline.

This phenomenon is remarkably common to almost every country on the globe. For example, in the U.S., while the numbers are significantly larger (with a population of almost 330 million people), the same pattern of decline is clear (my thanks are due to my friend Ronnie (Aaron) Yifrah for the following graphs): 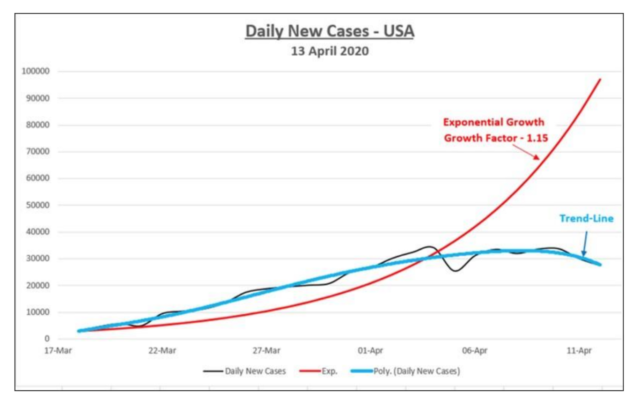 In Israel, the absolute numbers are smaller but the phenomenon is similar: 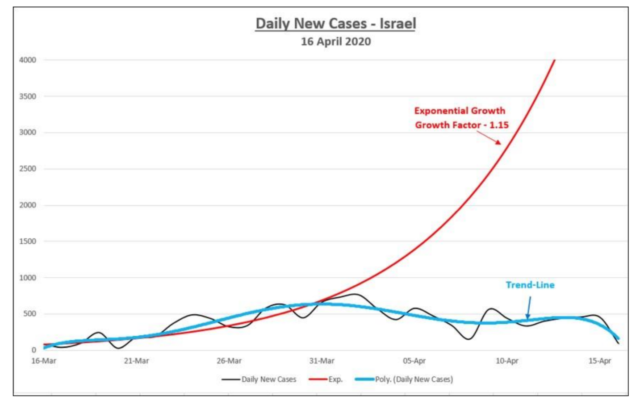 This pattern is neither unique to Israel or the U.S. and indeed represents a global phenomenon that is reflected in the following chart which provides the daily number of infections worldwide (for countries that have published precise data): 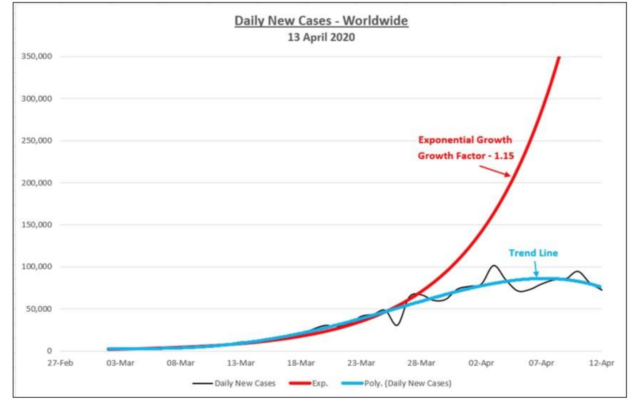 It is interesting to note that this pattern, mainly the onset rapid growth and the following decline in the number of new daily patients, is still shared amongst countries that responded in significantly different ways.

This is demonstrated in the following graphs that illustrate the
situation in Italy, a country that imposed a complete lockdown, as well as Sweden, whose lenient policy did not implement any kind of lockdown: 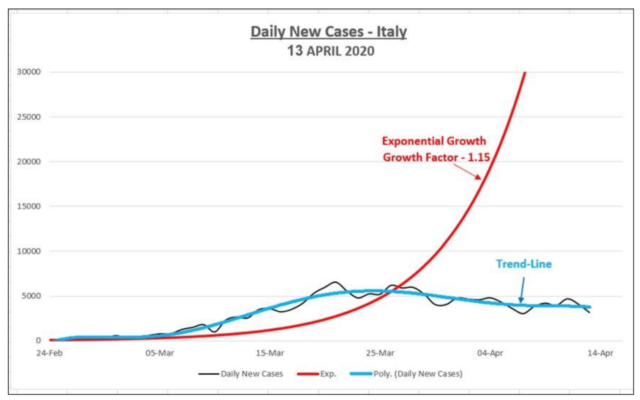 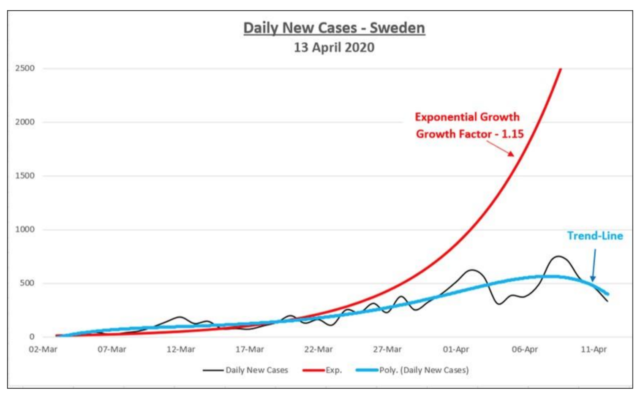 With the aforementioned information, we can return now to the original question: Has the Coronavirus continued to spread exponentially?

With careful consideration, the answer is simply negative. The spread of the virus starts at an exponential rate, however, continues to moderate and ultimately fades after 8 weeks or so since its outbreak.

Given the data, it is imperative to elaborate on what caused the decline in the number of new infections.

Some may claim that the decline in the number of additional patients every day is a result of the tight lockdown imposed by the government and health authorities. Examining the data of different countries around the world casts a heavy question mark on the above statement.

It turns out that a similar pattern – rapid increase in infections that reaches a peak in the sixth week and declines from the eighth week – is common to all countries in which the disease was discovered, regardless of their response policies: some imposed a severe and immediate lockdown that included not only “social distancing” and banning crowding, but also
shutout of economy (like Israel); some “ignored” the infection and continued almost a normal life (such as Taiwan, Korea or Sweden), and some initially adopted a lenient policy but soon reversed to a complete lockdown (such as Italy or the State of New York). Nonetheless, the data
shows similar time constants amongst all these countries in regard to the initial rapid growth and the decline of the disease.

For example, our calculations show that the pattern of the daily new infections as a percentage of accumulated number of infections (weekly averaged), is common to every country around the globe. Typically, in the first phase of the spread, this percentage amounted around 30%, decreased to a level of less than 10% after 6 weeks, and ultimately reached a level of less than 5% a week later.

(I want to extend my gratitude to Professor Zvi Ziegler of the Technion, who sent me his calculations and analysis regarding the weekly averaged infection rate in Israel and in twenty other countries.)

This phenomenon is illustrated in the next chart for selected countries: 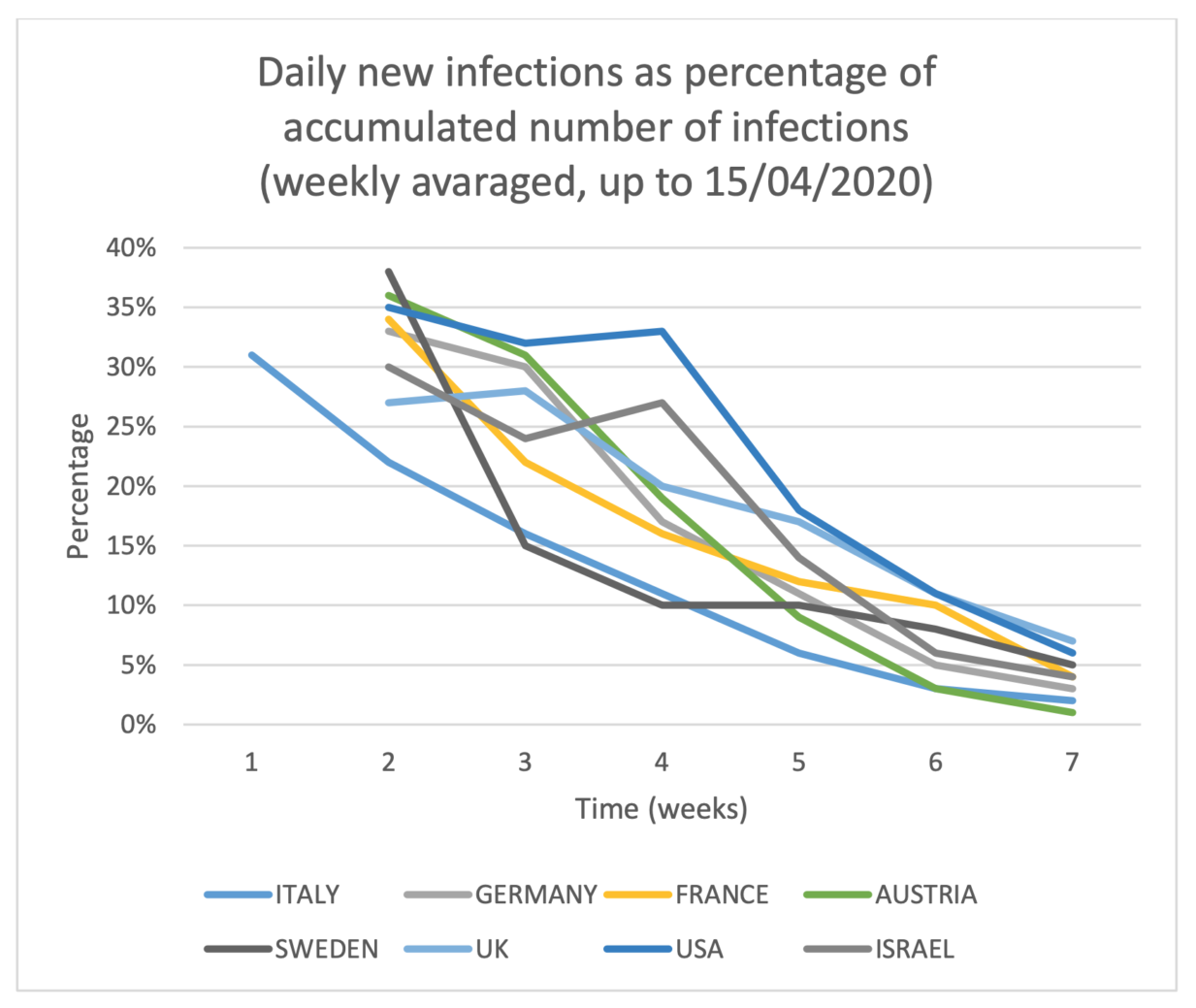 It is important to distinguish between lockdown policies that include an economic shutdown through total or partial workforce reductions (such as Israel, where nearly 85% of the workforce was shut down at the expense of 100 billion shekels per month), and policies of social distancing (e.g. prohibiting large crowds, keeping distance between people, etc.).

Certainly, a full complete lockdown reduces the spread of the virus. However, as the above data shows, there is an apparent similar decline in the rate of infection even in countries that did not enforce a full shutdown. Further research must be performed in order to understand the underlying reason behind this observation.

Severe lockdown has some negative implications. Its immediate result is an increase in the level of unemployment and the drop in GDP (in Israel, it is estimated that every month of lockdown is reducing the GDP by 8%). This will eventually lead to an increase in poverty and to human life
loss due other diseases.

Given that the evidence reveals that the Corona disease declines even without a complete lockdown, it is recommendable to reverse the current policy and remove the lockdown. At the same time, it is advisable to continue with low-cost measures, such as wearing masks, expanding testing for defined populations and prohibiting mass gatherings.

Thus we recommend to increase participation in the workforce to 50% on the day after Passover (or the following Sunday on April 19). It should then increase to 100% participation in the workforce in the following 1-2 weeks, apart from a limited number of high-infection areas in which the rate of contagion will be regularly assessed. A relief on these restrictions in these defined areas is contingent upon a decrease to the rate of growth to less than 5 percent.

It is critical to remove the bottleneck that is preventing the expansion of testing to 20,000 – 30,000 per day and to focus on acquiring medical swabs, test kits, and reagents (including from local production). The decline in growth of the Coronavirus in general, and critical-condition patients in particular, decreases the likelihood that Israel will undergo the system-wide overload that the health systems of Italy, Spain and New York experienced.

Facing high rates of infection, the latter systems were unable to handle the sudden influx in patients. With that being said, Israel may face a shortage in ventilators. While this has not happened yet, it is crucial to focus on closing the gap.