Will This Species Be Sacrificed Due to COVID? 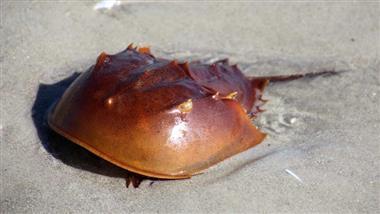 Horseshoe Crabs are a keystone species. Many other species depend upon them. As we unravel the food chains and webs we cause problems for ourselves as a species. We ignore the extirpation and extinction of species at our own peril.

It is important how Horseshoe Crabs balance the population of other invertebrate species, keeping the oceans in ecological balance. Migrating shorebirds rely on the eggs of the Horseshoe Crab to sustain their fat reserves.

These shorebirds nest in the tundra. Red Knots have been strongly impacted, other shorebirds as well. We have made some progress in the Chesapeake area saving Horseshoe Crabs from over-harvesting, but will that progress be maintained in the future? Our health and the health of nature are one and the same. We ignore the plight of the Horseshoe Crabs and the plight of those dependent upon them at our own peril.

Horseshoe crabs may represent an unwitting casualty in the race to develop a vaccine against COVID-19. Not only has the vaccine development process been criticized for being the most fast-tracked vaccine ever created in history, but it’s dependent on the blue blood from horseshoe crabs — the only known source of limulus amebocyte lysate (LAL).1

LAL is used to detect endotoxins, bacterial contaminants that can be deadly if they end up in vaccines, injectable drugs or other medical devices and implants, such as artificial knees and hips. When blood from horseshoe crabs comes into contact with endotoxins, amebocytes — horseshoe crab immune cells — clot, forming a mass that signifies the presence of the potentially deadly bacterial contaminants.2

The bleeding of horseshoe crabs for pharmaceutical usage is not a new phenomenon, nor one that’s limited to experimental COVID-19 vaccines. The ability of horseshoe crab blood to detect endotoxins, which occurs via a “primitive but highly sensitive immune response,”3 has been known since 1956,4 and the U.S. Food and Drug Administration (FDA) approved LAL for use in testing drugs and vaccines in 1977.5

Prior to this, the pharmaceutical industry used rabbits to detect endotoxins, which led to hundreds of thousands of rabbit euthanizations every year. Today, every U.S. FDA approved drug must be tested for bacterial contaminants, and although a synthetic alternative to LAL exists, the U.S. Pharmacopeia, which works closely with the FDA, hasn’t fully endorsed it.6

As a result, the horseshoe-derived test is still widely used. Every year, the pharmaceutical industry captures about 500,000 horseshoe crabs on the East Coast of the U.S. and drains up to one-third of their blood.7 The pharmaceutical industry maintains that most horseshoe crabs are unharmed by the process, but an average of 13% of the bled crabs are sold off as bait to fisheries.

The remaining crabs are returned to the water, but estimates vary on how many ultimately die from the stress of the experience. Studies have found deaths related to the bleeding process range from 5% to 15%, with the 15% figure used for management purposes.

However, this may be misleading, according to a study published in the journal Marine and Freshwater Behaviour and Physiology,8 because most of the studies involved only males, did mimic handling practices typical of the biomedical facility doing the bleeding, and harvested females after spawning season, when much of the biomedical harvesting occurs during the season.

“Female mortality is of particular concern because they have greater importance than males for population dynamics, are preferentially harvested and are more likely to be physiologically stressed than males because of energy outlay for egg production,” the researchers wrote, adding that one study reported a 29% mortality in female horseshoe crabs that were bled.

How Many Horseshoe Crabs Are Dying to Test Human Vaccines?

“Mortality rates in bled treatment groups were double those used in current management of the biomedical fishery. The bait and biomedical fisheries are managed differently because biomedical is considered a low-mortality ‘catch and release’ fishery,” the researchers wrote, but clearly they’re having a detrimental effect on horseshoe crabs’ survival.9

Even using conservative estimates of mortality caused by bleeding, and combining it with the crabs sold for bait, another study estimated that at least 130,000 horseshoe crabs are killed every year by the biomedical industry.10

What’s more, aside from the crabs that die outright, sublethal effects, including injury and disorientation, are also known to occur as a result of capture, handling and transportation, and may affect horseshoe crabs for weeks following the bleeding. This may result in increased disease in the crabs and could cause lower spawning rates, further affecting the specie’s survival.11

In fact, a study followed 28 horseshoe crabs that were fitted with acoustic transmitters and released into the Great Bay Estuary in New Hampshire. Half were bled and half were not.12

The collected data showed that the bled crabs approached mating beaches less often than the nonbled crabs in the first week after they were released, while the bled animals also stayed significantly deeper during the spawning season compared to the nonbled crabs.

Horseshoe Crab Populations Are on the Decline

Horseshoe crabs, which have been on this planet for an estimated 450 million years, surviving ice ages, asteroids and more, and predating dinosaurs by more than 200 million years,13 may have met their match with the pharmaceutical industry, as their population is on the decline.

They’re unique in a number of ways, including having 10 eyes and 10 legs, with a mouth in the center. And, despite their name, horseshoe crabs aren’t crustaceans like true crabs but, rather, are more closely related to spiders and scorpions. They belong to the Merostomata class, which means “legs attached to mouth.”

These living fossils are a keystone species that play a valuable role in the environment, hosting organisms such as barnacles and blue mussels on their shells, acting as predators and helping to control clam, mussel and crustacean populations and providing a food source for a number of marine animals.

Population monitoring studies suggest horseshoe crab populations decreased more than 10%, or about 1% per year, from 2003 to 2014, although more striking declines have also been noted.

“An especially compelling example has been observed near Cape Cod at Mashnee Dike, where the spawning horseshoe crab count dwindled from around 3,000 to 148, representing a 95.3% decline over a 15-year period (1984–1999),” researchers wrote in the journal Frontiers in Marine Science.14

While environmental pollutants, including the sunscreen chemical oxybenzone, have been cited for harming horseshoe crabs,15 according to National Geographic, “The biggest threat to horseshoe crabs is being harvested for human use, including for bait and biomedical materials.”16

Reports by the Atlantic States Marine Fisheries Commission (ASMFC) also show a concerning rise in the number of horseshoe crabs being harvested by biomedical bleeding facilities, and dying as a result. According to a review article in the journal Frontiers in Marine Science:17

“From 2004 to 2012, the number of crabs delivered to biomedical bleeding facilities increased from 343,126 to 611,827, or by about 78%; while total mortality correspondingly increased by 75%. The percentage of horseshoe crabs that died prior to being bled more than doubled from 2008 to 2012, which may be attributed to deleterious harvest and transportation practices.

The maximum harvest mortality limit of 57,500 set by the ASMFC (based on the 15% mortality allowance) has been exceeded at times by more than 20,000 horseshoe crabs every year since 2007. More recently, ASMFC data has estimated the mortality of horseshoe crabs harvested for the biomedical industry to be 70,000 (with a range of 23,000–140,000).

… Based on current rates of horseshoe crab mortality and related [increasing U.S. human] population trends, over the next two decades, demand for the LAL test is likely to reach unsustainable levels.

While horseshoe crab populations have moderately stabilized in some regions of the Atlantic, increases have also not been observed, which may be a result of negative behavioral or reproduction changes once the animals are returned to the ocean as well as deteriorating coastlines.”

A loss of horseshoe crabs will also affect shorebirds, especially the red knot, semipalmated sandpiper, ruddy turnstone and sanderling, which have migrations that correspond with horseshoe crab spawning.

Red knots, for instance, travel 19,000 miles from the southeastern U.S. or South America to the Canadian Arctic. The final stop in their migration is the Delaware Bay, where they feed primarily on horseshoe crab eggs, a necessary nutrition source for them to complete the final leg of their journey.

Vaccine Maker Says Only One Day’s Worth of Lysate Needed

Conservationists argue that the heavy burden placed on horseshoe crabs for the production of COVID-19 vaccines could prove detrimental to the species. Speaking out against such criticism, vaccine maker Lonza, whose COVID-19 vaccine is slated for human clinical trials, stated that their COVID-19 vaccine tests would require only a day’s worth of lysate production from three U.S. manufacturers.19

John Dubczak, Lonza’s executive director of reagent development and pilot program operations, similarly stated that 600,000 tests would be performed to produce 5 billion COVID-19 vaccine doses, which would require about the amount of lysate produced in one day. “This places no undue burden on the [lysate] supply chain or horseshoe crab populations,” he told National Geographic.20

Unfortunately, even the current state of horseshoe crab harvesting appears unsustainable, while efforts to protect horseshoe crabs by industry following established Best Management Practices are not being upheld.

As reported by the Frontiers in Marine Science review article, in 2013, the ASMFC noted, “The current elected panel is predominantly comprised of stakeholders representing the agencies that control horseshoe crab biomedical assay commerce, suggesting that effective management strategies may be compromised by conflicting economic and environmental considerations.”21

Use of Synthetic Alternative Could Save Horseshoe Crabs

In 1997, scientists at the National University of Singapore developed laboratory-synthesized recombinant Factor C (rFC), a synthetic alternative to the LAL test. The synthetic version uses a single protein cloned from a horseshoe crab as its active ingredient.22 Although rFC is approved for use in Europe, questions about efficacy have kept it from being widely used in the U.S.

Writing in PLOS Biology, however, researchers determined that rFC is not only effective for endotoxin detection but also may largely eliminate the occurrence of false positive reactions that may occur to glucans and some other substances.23 “The reagent [rFC] is more consistent since it is not subject to the lot-to-lot variability found in LAL,” they noted, adding that it presents potential cost savings as well.

Importantly, switching to rFC would reduce the demand for LAL by 90%, which could save about 100,000 horseshoe crabs from dying every year in North America alone. The represents an “extraordinary opportunity” for the pharmaceutical industry to contribute to horseshoe crab conservation, leading the researchers to call for urgent change in the industry:24

“Given the equivalent efficacy, proven reliability, a clearly defined regulatory pathway, and the profound ecological benefits of ending the bleeding of horseshoe crabs, the authors recommend rapid proactive adoption of the recombinant-based alternatives as the standard method for endotoxin testing in pharmaceutical and biomedical laboratories worldwide.”

Thank you Dr. Mercola for connecting our health to the health of the environment, all species and the ecology.