PROLOGUE: While the world has been conditioned to just see the genocide in Rwanda as an affair between the ethnicities of the Tutsi and the Hutu people, it is often overlooked that it was the culmination of a proxy war with France, the USA, the UN and still Belgium as well as Uganda and DR Congo being major players. In addition it is completely overlooked that it also was a genocide against the Indigenous Twa people, who are the aboriginal forest people living in peace in Rwanda. Because they were seen as underdogs by the majority of the society in Rwanda, both the Hutu as well as the Tutsi believed they were used as spies by the respective other side - so both slaughtered the Twa in 1994, and until today no real justice has come forward to address this genocide. While the international and regional players, as well as the Tutsi and the Hutu came somehow to terms, the genocide against the Twa continues in Rwanda and Burundi as well as in Uganda and the DRC. The trial of the now nabbed key suspect will hopefully bring the genocide against the Twa to the forefront and also reveal how he could hide in France for so long, while powerful figures in the Kenya government were accused to harbour and shield him in Kenya. Did it take the French 26 years to spin their own narrative afresh to deliver him only now to the Hague?

Félicien Kabuga, an alleged leading figure in the 1994 genocide, was arrested in Paris

LYON, France – A man wanted in connection with the 1994 Rwandan genocide, and subject of an INTERPOL Red Notice, has been arrested by French police.

Félicien Kabuga, indicted by the International Criminal Tribunal for Rwanda (ICTR) on seven counts including genocide, conspiracy to commit genocide, persecution and extermination, was taken into custody in a village near Paris where he had been living under a false identity.

A Red Notice for the now 84-year-old was issued by INTERPOL in 2001 at the request of the ICTR. Kabuga was also one of the men targeted by INTERPOL’s Rwandan Genocide Fugitives Project, run by its Fugitive Investigative Support unit

Created in 2007 to support the search of fugitives wanted by the ICTR and Rwandan Authorities, to date the project has assisted in the arrest of 12 fugitives.

The two men wanted by the UN International Residual Mechanism for Criminal Tribunals who are still at large, Protais Mpiranya and Augustin Bizimana both remain subjects of INTERPOL Red Notices, in addition to other individuals still wanted by Rwandan authorities.

INTERPOL Secretary General Jürgen Stock praised the arrest as an important step in bringing justice for the victims and survivors of the Rwandan genocide.

“Kabuga’s arrest demonstrates the power and effectiveness of international cooperation between police worldwide in identifying, locating and apprehending fugitives around the world.

“In 2014, on the 20th anniversary of the Rwandan genocide, the theme of the International Expert Meeting on Genocide organized in Kigali by our fugitives unit was ‘closing the impunity gap’. Today is an important step in achieving this,” said the INTERPOL Chief.

The 2014 meeting saw the launch of a joint campaign to locate those responsible for the tragedy involving the UN Mechanism for International Tribunals (MICT) fugitive tracking team, Rwanda National Public Prosecution Authority, INTERPOL and the War Crimes Rewards Program of the US Department of State Office of Global Criminal Justice, with the support of the Rwanda National Police and the INTERPOL National Central Bureau in Kigali.

Under this framework, several operational meetings have been organized by INTERPOL’s Fugitives Unit bringing together investigators from different countries in order to share information and investigative leads on individuals wanted in connection with Rwandan genocide, including Kabuga.

Today, Félicien Kabuga – one of the world’s most wanted fugitives who is alleged to have been a leading figure in the 1994 genocide against the Tutsi in Rwanda – was arrested in Paris by French authorities as the result of a joint investigation with the IRMCT Office of the Prosecutor.

The arrest of Félicien Kabuga today is a reminder that those responsible for genocide can be brought to account, even twenty-six years after their crimes.

Our first thoughts must be with the victims and survivors of the Rwandan genocide. Advocating on their behalf is an immense professional honor for my entire Office.

For international justice, Kabuga’s arrest demonstrates that we can succeed when we have the international community’s support. This result is a tribute to the unwavering commitment of the United Nations Security Council, which established the Mechanism to continue the accountability process in Rwanda and the former Yugoslavia.

I would like to extend our appreciation to France and its law enforcement authorities, particularly the Central Office for Combatting Crimes Against Humanity, Genocide and War Crimes and the Office of the Procureur Général of the Paris Cour d’Appel. This arrest could not have been made without their exceptional cooperation and skill.

It is important to also recognize the many other partners whose contributions were essential, including law enforcement agencies and prosecution services from Rwanda, Belgium, the United Kingdom, Germany, the Netherlands, Austria, Luxembourg, Switzerland, the United States, EUROPOL and INTERPOL. This arrest demonstrates the impressive results that can be achieved through international law enforcement and judicial cooperation.

Earlier this year my Office visited the Ntarama genocide memorial in Rwanda to honor the memory of the victims and renew our commitment to justice. Today’s arrest underlines the strength of our determination.

Following completion of appropriate procedures under French law, Kabuga is expected to the transferred to the custody of the Mechanism, where he will stand trial.

French police arrested Kabuga in a sophisticated, coordinated operation with simultaneous searches across a number of locations. 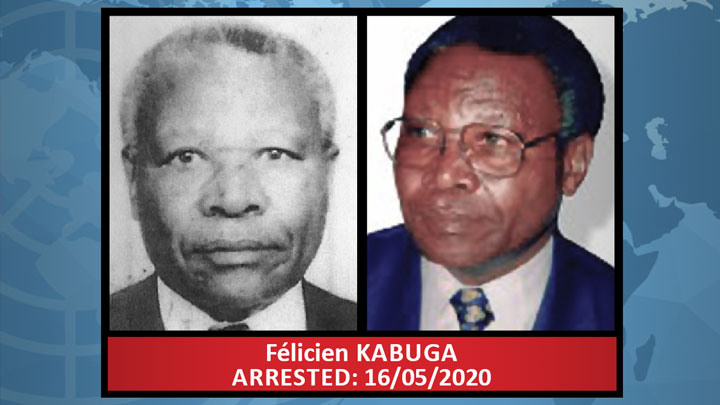 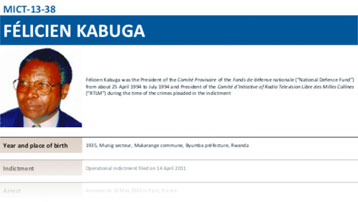 Exclusively for the use of the media. Not an official document.