With knowledge from past outbreaks, many Indigenous people return to traditional medicines

Since the start of the pandemic, this newspaper has reported on ways different religions are responding. One group that has not been featured is Indigenous people. This isn’t because nobody wants to. It’s just it’s not easy to do.

For one thing, there are no Indigenous spirituality offices you can call for official comment. And even if you could, there are thousands of Indigenous nations, which makes any generalization impossible.

For another, there is no sense of a division between spirituality and the rest of life for Indigenous Peoples. Even asking the question seems foreign to how they live.

As for COVID-19, it’s a very real threat to Indigenous people. How are they integrating their traditional practices and beliefs with social distancing, wearing masks, washing hands and modern medical technology? With help from Niigaan Sinclair, who teaches native studies at the University of Manitoba and writes about Indigenous issues for the Free Press, I decided to find out.

First off, it’s important to note COVID-19 is not the first pandemic faced by Indigenous people.

Since their first contact with Europeans, Indigenous populations encountered new and devastating diseases. Most notably, smallpox wiped out entire communities, leading Indigenous Peoples to develop practices and medicines to battle the sickness.

Indigenous people were also hit hard by the deadly 1918 Spanish flu. In northern Manitoba, communities like Norway House experienced the sickness nearly six months after the south had finished with their first wave. They lost a fifth of their population.

Meanwhile, tuberculosis and other outbreaks were common at residential schools. Children were regularly quarantined and many died.

Indigenous nations know about sickness and pandemics, in other words, and developed practices to deal with them.

For example, when sicknesses historically entered communities, medicine people incorporated quarantine practices and social-distancing practices. These could involve creating controlled movement zones in communities, signified by hanging an individual’s or family’s possessions in a tree.

Communities would often work together to combat the sickness, sometimes putting aside centuries of conflict. The dead would be buried together in burial mounds, and medicines would be shared.

Indigenous Peoples also included European medicines in their practices. Treaty Six, signed by Crown representatives and Cree, Assiniboine and Ojibwa leaders in 1876 in Saskatchewan, included requirements for a "medicine chest" to be provided to help Indigenous communities combat sickness.

As for COVID-19 today, Terry Nelson, former chief of the Roseau River reserve, is talking to people in his community about ways to address the virus.

In addition to following practices such as social distancing, he suggests using traditional medicines such as bark from fir trees, yarrow and sage, which treat various ailments such as coughs and colds.

In addition, he is talking to younger people about the science behind traditional medicines, how to find and collect them, and their connection to spiritual practices.

"It’s part of the revival of traditional knowledge," he says, pointing out that traditional societies like the Midéwiwin are specialists in medicinal practices, incorporating dance, song and story into a sense of health.

This is important, he notes, since knowledge of traditional medicines have been lost in communities due to the Indian Act and residential schools.

"Because of the persecution of our people, this knowledge went underground," Nelson says, adding now it is being shared widely.

Terry’s brother Charlie, a Midéwiwin elder, is also speaking to young people about how ceremonies and traditional teachings can give them a framework for dealing with COVID-19.

One of the biggest challenges Indigenous peoples will experience during this pandemic is an inability to feast and attend large gatherings, such as funerals and sundances, he says.

"These will have to be greatly restricted," he explains, "but when this is over we can look forward to gathering again."

For Wanda Levasseur, a member of Ebb and Flow First Nation and elder in residence at the University of Manitoba, this is the time for staying home and "burning our medicine, sage and cedar" — anti-bacterial and cleansing agents for the air.

She also advocates drinking boiled pine and cedar bark and needles, which are high in vitamin C. While drinking them, people should also "pray to the Creator for protection" from the virus. This not only creates a sense of connectedness but mental well-being, she notes.

For Indigenous people, Levasseur points out, the plant world "is sacred," helping Indigenous communities build their relationships with the universe and each other.

"When people go out into the woods and forests to find these medicines, they reconnect themselves with the Creator," she adds.

For Sinclair, all of this adds up to a "sense of community that bridges space, time, and the worst of conflict, something that brings light and hope during the darkest of times. That is the best medicine of all."

John Longhurst John Longhurst writes for the Winnipeg Free Press and blogs about the media, marketing and communications at Making the News.

South Dakota Gov. Kristi Noem is not only arrogant - she breaks the law with her unjustified demands. Medical-martial law can not be imposed on First Nation territories.

Cheyenne River Sioux and Oglala Sioux leaders have rejected South Dakota Gov. Kristi Noem’s demand that they remove checkpoints meant to regulate traffic through their reservation, set up to prevent the spread of coronavirus on Indigenous lands.

In early April, the Indigenous peoples’ governments separately decided to regulate travel on and off their 'reservations' via checkpoints. The Oglala Sioux Tribe closed the Pine Ridge Indian Reservation to all non-residents for non-essential travel, though vehicles could pass through without stopping. The Cheyenne River Sioux also restricted travel, limiting non-residents from entering their 'reservation' unless on essential business or if the First Nation government has granted them a travel permit. Residents and non-residents entering the reservation must fill out a health questionnaire.

On Friday, South Dakota Gov. Kristi Noem sent letters to Chairman Harold Frazier of the Cheyenne River Sioux and President Julian Bear Runner of the Oglala Sioux demanding that they remove the checkpoints from state and U.S. highways. Noem said if the checkpoints are not removed within 48 hours, she would take “necessary legal action,” according to a statement released Friday.

“We are strongest when we work together; this includes our battle against COVID-19,” Noem said in the statement. “I request that the 'tribes' (sic!) immediately cease interfering with or regulating traffic on U.S. and state highways and remove all travel checkpoints.”

On April 8, the U.S. Department of the Interior’s Bureau of Indian Affairs (BIA) released temporary guidance telling First Nations to reach an agreement with state authorities before restricting travel on government-owned roads. “Neither consultation nor agreement among the tribal and state government occurred,” Noem said in her statement. “Regardless, the Cheyenne River Sioux and the Oglala Sioux established checkpoints on state and U.S. highways to control and restrict non-tribal member travel.”

But both Frazier and Bear Runner maintain that they have the legal authority to have the checkpoints and they do not intend to remove them.

“We’re not doing anything wrong. We have every legal right to do what we’re doing,” Frazier tells TIME. “We’re just trying to save lives, and the lives of all the residents of this 'reservation', not just our members.”

Both the Cheyenne River Sioux and the Oglala Sioux have issued stay-at-home orders and curfews, while the state of South Dakota has not.

Frazier says of now there is only one positive case of coronavirus on the Cheyenne River Sioux territory. He says because of the checkpoint system, they know where that person went and who they came in contact with.

In a video posted to Facebook on Saturday, Bear Runner said that Noem had “threatened the sovereign interest of the Oglala people when she issued an ultimatum,” but continued, “we have a prior and superior right to make our own laws and be governed by them.”

(NOTA BENE: President Julian Bear Runner of the Oglala Sioux First Nation is unfortunately still forced to use the imperialist, colonial and derogatory term 'tribe', because the USA was still not able to vet and cleanse its lawbooks and statutes to which he has to refer in his speech. see: https://ecoterra.info/index.php/en/27-abolish-the-term-tribe )

He said he believes the First Nation’s checkpoints are in “full” compliance with the BIA’s memorandum since they “have not closed non-Indigenous roads or highways owned by the state of South Dakota or any other government,” and it is not their intent to restrict access to such roads.

Gov. Noem’s office responded to TIME’s request for comment, saying that the governor’s letters to the Indigenous leaders speak for themselves.

Bear Runner said in the video that he had informed the state of South Dakota of their “border monitoring plan” on several occasions, and only learned of Noem’s letter via news reports and social media.

Frazier tells TIME that he believes his people have many legal justifications, including in his First Nation’s Constitution and in the Ft. Laramie Treaty of 1868, for their travel checkpoints. He added that, as of now, the Cheyenne River Sioux’s nine checkpoints “take less than a minute.”

According to a summary of the Cheyenne River Sioux checkpoint policies posted on social media, residents of the reservation are allowed to travel to areas within South Dakota that are not COVID-19 “hot-spots” as long as it’s for an “essential activity.” When they return to the reservation, they must fill out a health questionnaire at a checkpoint. Frazier also tells TIME that license plate numbers are written down. 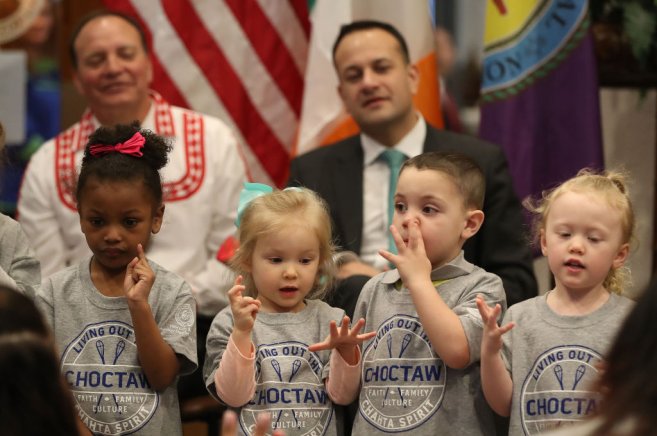 Taoiseach Leo Varadkar watches children from the Choctaw Nation child Development center at the Choctaw tribal council in the Main Hall in Oaklahoma on day two of his week long visit to the United States of America. Picture: Niall Carson—Getty

ANative American community severely impacted by the COVID-19 outbreak has received an outpour of donations from Irish people, who are returning a historic favor from 173 years ago.

In 1847, the Native American Choctaw nation sent $170 ($5000 today) of relief aid to the Irish people impacted by the great potato famine. Now, the Irish are reciprocating the act of goodwill by donating funds to the Navajo nation, which has been severely impacted by COVID-19, with at least 2373 cases and 73 death as of May 3.

The Navajo nation has one of the highest infection rates per capitain the United States. It reported its first two cases on March 17 and since, the number of cases has continued to rise. Up to 40% of people living in the nation do not have access to running water in their homes and 10% do not have electricity. A GoFundMe campaign raising funds for bulk food and medical supplies has already reached $1,769,300, thanks in large part to Irish donors.

“From an Irish brother to our native American brothers,” writes donor James Fallon on the campaign page. “Karma always comes back around.”

The Irish people never forgot this act of generosity. In 2017, a sculpture of nine eagles feathers called Kindred Spirits was unveiled in Bailick Park in Midlton, County Cork, Ireland. The following year, Irish Prime Minister Leo Varadkar announced a scholarship program for Choctaw youth, calling the relationshipbetween the two communities “a sacred bond…which has joined our peoples together for all time.” He added, “your act of kindness has never been, and never will be, forgotten in Ireland.”