UPDATE 27. April 2020: The situation has calmed down a bit, but it is still dangerous since the perpetrators have not been brought to book nor even apprehended.

It is with great sadness that the Congolese Institute for the Conservation of Nature (ICCN) confirms the identities of the Virunga Park Rangers and employees who tragically lost their lives as a result of the attack that occurred this morning at 11 am on Route Nationale 2 near the headquarters of Virunga National Park in Rumangabo.

All of those that lost their lives leave behind families, colleagues, parents and grieving friends. Three other Rangers are seriously injured and one remains in a critical condition. They have been evacuated to medical facilities where they are receiving appropriate care. In addition to Virunga National Park staff, 4 civilians, not related to the Park, sadly lost their lives and a further 2 were injured.

Initial investigations indicate that the Rangers were on their way back to their headquarters when they encountered a civilian vehicle that had been attacked and subsequently came under a ferociously violent and sustained ambush. We can confirm that the perpetrators of this attack were the armed group "FDLR-FOCA.”

These tragic events will not be allowed to undermine Virunga National Park’s commitment to economic and humanitarian development programmes in partnership with, and for the benefit of, the communities that surround the Park. More than ever, those communities aspire to live in a climate of stability, justice and peace.

Our thoughts and prayers are tonight with the families and friends of all the victims, including the innocent civilians, as well as the injured Rangers. 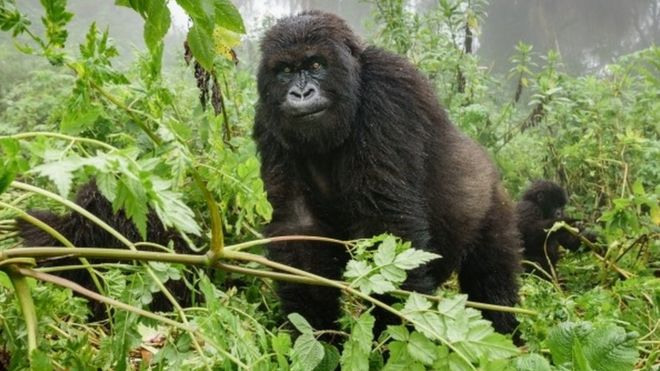 Mountain gorillas are one of Virunga's main attractions - Picture: GETTY

The park was established in 1925 as Africa's first national park and is a UNESCO-designated World Heritage Site since 1979. In recent years poaching and the Congo Civil War have seriously damaged its wildlife population. The park is managed by the Congolese National Park Authorities, the Institut Congolais pour la Conservation de la Nature (ICCN) and its partner the Virunga Foundation.

The Institut Congolais pour la Conservation de la Nature (ICCN) is a Congolese governmental partner tasked with the protection and conservation of the Virunga National Park and Kahuzi-Biega National Park, both UNESCO World Heritage Sites in the Democratic Republic of Congo. Members of the ICCN are charged with the overall protection of the parks and the endangered Mountain Gorilla.

BUT THERE IS A BACKGROUND STORY

- LOOK WHAT HAPPENED 2 DAYS BEFORE:

We're supposed to believe that 'conservation' in Africa has changed after all the recent scandals? "Two trucks full of heavily armed Park wardens raiding the town of Nzulo where they are demolishing the homes of the inhabitants". 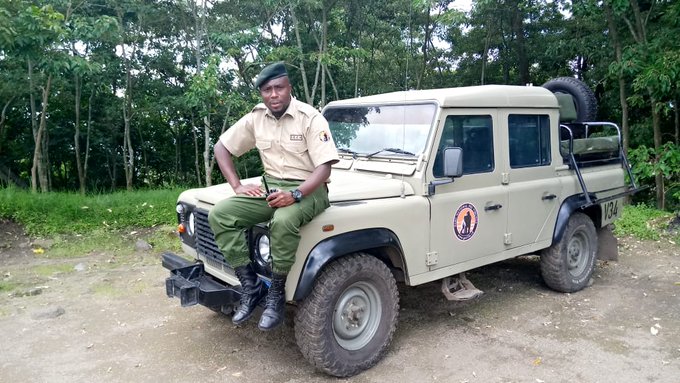 In addition to the huge support paid to the ICCH, the German development aid also pays for an army general under international sanctions to wage war on the Batwa of Kahuzi-Biega national park.

This scandal of militarised conservation in #DRC will see more bloody fights.

But hardly anybody speaks about these atrocities targeting the aboriginal people whose ancient homeland these forests are.

At least 12 rangers have been killed by suspected members of a Rwandan rebel group in the Virunga National Park in the Democratic Republic of Congo. 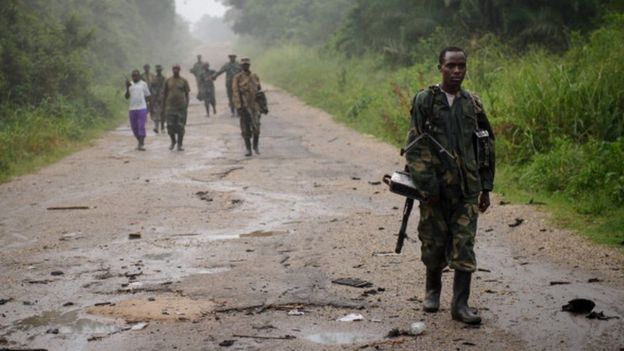 He said about 60 militiamen had ambushed a convoy of civilians that was being protected by the rangers.

Africa's oldest nature reserve is a popular tourist attraction, known for its population of mountain gorillas.

The biologically diverse park is a Unesco World Heritage site in the restive east of the DR Congo. 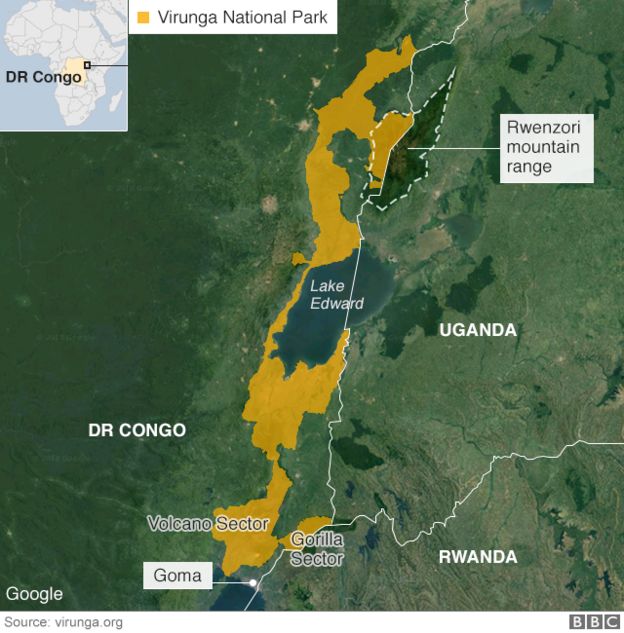 Another six people were injured in the attack blamed on militiamen from the Democratic Forces for the Liberation of Rwanda (FDLR), whose leaders have been accused of links to the 1994 genocide in which some 800,000 ethnic Tutsis and moderate Hutus were killed.

The group has so far made no public comments on the accusations against it.

A statement on the park's website said there were indications that this was an attack on the local civilian population.

"Virunga Park Rangers were not the target of the assault, but lost their lives responding to the attack in defence of the local population," the statement said.

Kidnappers have been known to target tourists in the park. In 2018 attackers killed park ranger Rachel Masika Baraka during the brief kidnapping of two British tourists and their driver. 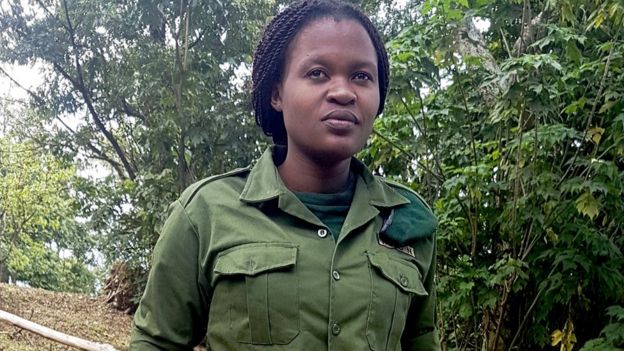 Rachel Masika Baraka was the eighth ranger killed this year - Picture: Virunga National Park
The park closed to tourists on 23 March following advice from experts that gorillas might be vulnerable to complications from catching Covid-19. 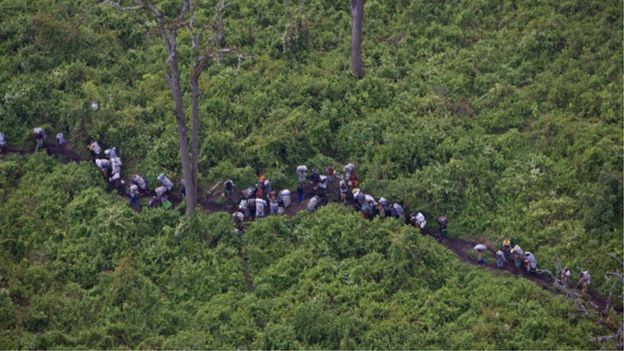 However, the many grave human rights violations and murders targeting especially the Aboriginal owners of these forest, the Indigenous Twa people, at the hands of government and militia groups as well as since the days of Diane Fossey at the hands of conservationists, must also not be forgotten.

Suspected Hutu militiamen have killed 16 people, including 12 rangers, in the Virunga national park, a Democratic Republic of the Congo government official has said, in the deadliest attack in the park’s recent history.

The park in eastern DRC, home to critically endangered mountain gorillas as well as hundreds of other rare species, has faced repeated incursions and attacks by local armed groups.

About 60 fighters from the Democratic Forces for the Liberation of Rwanda, a Hutu rebel group, ambushed a convoy of civilians that was being protected by 15 rangers, said Cosma Wilungula, the director of the Congolese Institute for Nature Conservation. Many others were seriously injured, he said.

There was no immediate confirmation from the Virunga park of the incident or casualties.

The park has been repeatedly hit by violence. It was shut to tourists for eight months in 2018 after a series of attacks on staff but reopened after a thorough review of security precautions and reinforcement of the 700 rangers deployed to keep animals and visitors safe.

The park, in North Kivu province, has a reputation as one of the most dangerous conservation projects in the world. It faces multiple security threats including illegal charcoal production, smuggling and poaching, as well as from the Mai Mai militia.

Founded in 1925 by Belgian colonial authorities, the park struggled in the immediate aftermath of the country’s independence in 1960 but flourished under President Mobutu Sese Seko, who took power in 1965.

The park suffered further during the civil war that followed Mobutu’s chaotic fall in 1997. Virunga’s mountain gorilla population declined to 300. It has since risen to more than 1,000, and the numbers of other animals such as forest elephants are also rising.

In 2007 a partnership was established between charities funded by private donors, the EU and the Congolese wildlife service. Emmanuel De Merode took charge and implemented a wide-ranging overhaul.

The rangers, who are recruited from nearby villages, are paid a monthly salary of $250, a sizeable sum for them. Initiatives have focused on nearby communities, with micro-loans and hydroelectric power projects to boost the local economy.

All visits to Virunga were suspended last month to protect the gorillas from infection by the coronavirus.

Twelve rangers and five other people were killed in Virunga National Park in the eastern part of the Democratic Republic of Congo on Friday. It was the latest deadly incident in the park, where more than 150 rangers have been killed since 2006.

Virunga, which includes large areas of intact rainforest that are home to endangered mountain gorillas (Gorilla beringei beringei) and eastern chimpanzees (Pan troglodytes schweinfurthii), is at the heart of Africa’s Great Lakes region, which has endured more than three decades of armed conflict.

Rebel groups fighting the Congolese government and each other have long been active within the park’s boundaries. According to the Game Rangers Association of Africa (GRAA), the militia are connected to hunting for bushmeat, illegal fishing and logging, and poaching, especially of elephants, to fund their activities.

In April 2018, five rangers and a driver were killed by suspected members of an armed militia. The park was closed to tourists a month later, after attacks by the Mai Mai militia targeted a park vehicle carrying tourists, and another incident in which two tourists were kidnapped and then released the next day. The park was only re-opened to visitors in February 2019 after a review of security and reinforcement of the 600-strong contingent of guards who patrol the park’s 7,800 square kilometers (3,000 square miles).

Friday’s murders took place on a highway close to Virunga National Park headquarters at Bukima. Initial reports indicate that the rangers were on their way back to headquarters when they encountered a civilian vehicle that had been attacked. They subsequently came under sustained attack by 60 armed militia, according to a statement from the Congolese Institute for the Conservation of Nature (ICCN) which oversees the park.

Besides the 12 park rangers, a driver and four other civilians were killed, and two injured. Three other rangers were also seriously injured. One remains in critical condition.

“We can confirm that the perpetrators were the armed group FDLR-FOCA,” said the ICCN statement, referring to the Democratic Forces for the Liberation of Rwanda (FDLR) and its armed wing, the Forces Combattantes Abacunguzi (FOCA).

A 2016 report published by the Enough Project, which investigates and campaigns against corruption and human rights violations in conflict zones in Africa, described an illegal charcoal cartel financing the FDLR.

“They’re heavily armed,” Congolese conservationist Bantu Lukambo told Enough about FDLR fighters in Virunga. “They know every inch of the park, and they enjoy protection by the national army.”

According to Enough, the FDLR effectively controls the southwestern part of Virunga, profiting from the production of high-quality charcoal from Virunga’s hardwood forests. Park rangers have not been able to patrol this part of the park since the 1990s – despite a drive to recruit, train, and better support the ranger corps starting in 2007.

The rangers’ mandate is to conserve wildlife and protect the park which means that they often end up in confrontations with militia, GRAA CEO Andrew Campbell told Mongabay.

“Their grieving families have not only lost loved ones, but in many cases sole breadwinners in a region where many people battle to survive. Employment opportunities are very few and far between in these remote areas,” said Campbell.

Chris Galliers, president of the International Ranger Federation (IRF), said: “Virunga is no stranger to the tragic loss of life, especially rangers. However this does not diminish the shock that has meet the global ranger community with the news of the senseless killing of rangers who by current accounts, put their life on the line to defend civilians who were under attack from militia near the village of Rumangabo.”

Park authorities have since 2007 run a Fallen Rangers Fund to support the families of Virunga rangers killed in the line of duty.

Fred Kockott is the director of the environmental journalism agency, Roving Reporters.