The still-growing lion cub petting industry masks a sinister legal industry in South Africa. Playing with cute little lion cubs is the tip of the iceberg – it’s what you don’t see that defines this abusive industry and we must all work to change that.

Having spent time myself in South Africa , I witnessed tourists and volunteers visiting numerous ‘lion parks’ in South Africa and enter the play pens of young orphan cubs, their instinct was to question the situation.Why are so many lion cubs being orphaned? And, almost without exception, are all told a lie, “That the cubs mothers died or abandoned them.” This lie is repeated time after time – So good is the lie that even good, caring people repeat the mantra and become party to the lie, and the scam in South Africa. You see, most of these lion cubs are forcibly removed from their mothers – to feed what has become a lucrative the lion cub petting machine.

Lion farmers/breeders speed-breed their lionesses by removing the cubs soon after birth.. Wild lions breed only once per year, at the most. The tiny blind cubs have now become part of the money machine, So around 2400 Cubs born every year.

Where and what are all these lion cubs destined for.. There is no documented evidence of any captive-bred lion in South Africa having been released into the wild – despite claims to the contrary. So remove that solution from the equation.

Why are these lion parks claiming that their lion cubs are “orphans”? And what exactly is the journey for that lion cub after its petting shelf life has expired? What is the link between these tiny cubs and the burgeoning canned lion hunting industry?

Here is a Timeline ~ From petted to hunted Lion.

REMOVAL OF CUBS: This usually happens after only a few days after birth, when the newborn cubs are forcibly removed by breeders from their mothers and sold or loaned to lion parks for exhibition and petting purposes.

PETTING: Each tiny cub, initially still with closed eyes, is petted by thousands of tourists keen to experience a close encounter with a cute cub. The cubs are handed from person to person and forced to pose for the all-important pictures.

WALKING: Once the cubs reach the age of around 6 months they become too big (and dangerous) to cuddle, and graduate to being walked with tourists, while a handler protects the tourists from being harmed by the adolescent and sometimes boisterous lions.

VOLUNTEER EMPLOYMENT: Local and international volunteers are tempted to South Africa, with the tantalising prospect of caring for these newly “orphaned” baby lion cubs. These kind but naive volunteers pay for such work experience, believing the lie that there work is important conservation work – to ‘save’ orphaned cubs and help with ‘lion research and conservation’ and/or to ‘return the lions to the wild’

TOURISM: Local and international tourists, in their thousands, pay around £10-£20 for the opportunity to play with baby lion cubs and to walk with adolescent lions, usually at the same facility. These tourists are fed the same lies. At this stage the lion parks wash their hands of their ‘orphaned’ lions.

KILLING FOR TROPHY: After two years of tourist petting and walking, the lion progresses to the second-last stage of its usefulness. The tourism industry now has no further need for this lion, and it is traded into the hunting industry, where it is shot by trophy hunters in what is known as ‘canned hunting’. Some of the lions are sold to zoos, others are kept back for breeding, but the majority disappear into the opaque and sprawling network of trophy hunting farms that are spread across the South Africa… Lion parks will often vehemently deny any association with the hunting industry, claiming that they sell / trade / swap lions to intermediaries and that they have no control over what happens after that.

The canned hunt attracts trophy collectors paying anywhere from £4,000 for a lioness, to £40,000 for a male white lion (hunting wild white lions is illegal but still happens). The hunt takes place in a small fenced area (often the size of half a football field), complete with typical bushveld trees, for that feel African feel. The lion, fresh from captivity, is released into this enclosed area – and shot and anyone can shoot a Wild animal in S.Africa if you pay meaning the Lion might have to ensure more agony because of the Shooters inexperience.

LION BONE TRADE: The final stage for the (now dead) lion is the selling of its bones to the insatiable Asian market for Traditional Chinese Medicine.

Presented by Lord Ashcroft KCMG PC, to accompany his new book "Unfair Game", this film discloses details of a second major investigation into captive-lion breeding, whereby thousands of Africa's most iconic animals are killed either for the bone trade or as hunting trophies. Visit http://www.LordAshcroftWildlife.com for more information and to order the book. Follow Lord Ashcroft on Twitter and/ or Facebook: @LordAshcroft

And how we can all help change this barbaric industry. Learn more in this exclusive interview with Carly Åhlén. 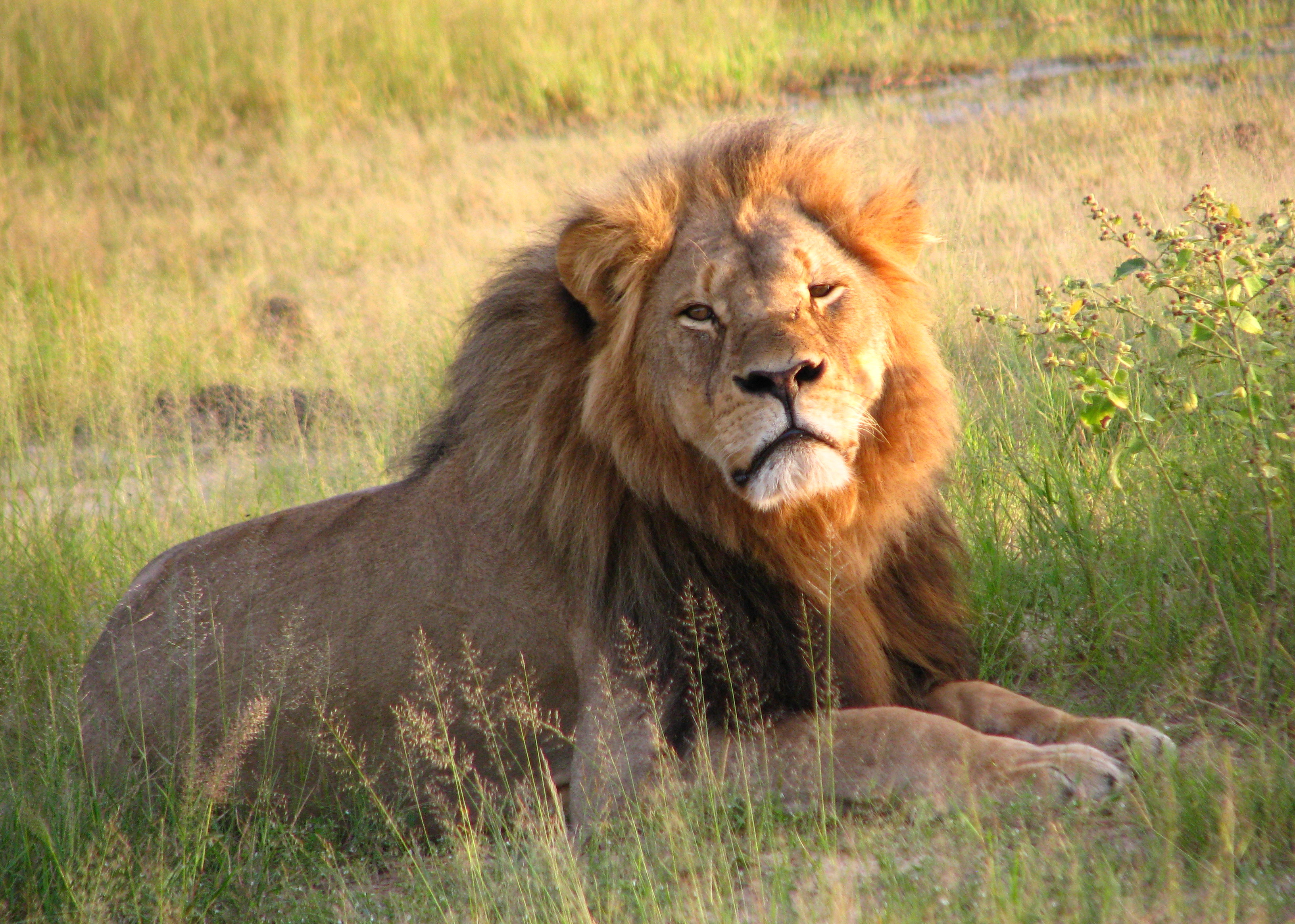 Miss Carly Åhlén is a Philanthropist, entrepreneur, and Honouree trustee for a Greek non profit animal charity. Her family owned Åhléns (retail empire which annually greets over 80 million customers at more than 60 locations in Sweden). Carly’s dedication to helping abused and homeless animals have seen her working with various charities across the world.

We caught up with Carly Åhlén at Banking Giants, “UBS”, fundraising event held in Geneva, Switzerland. Here’s an excerpt from our interaction:

Q: I have seen and read numerous articles about your dedication and passion to help abused animals across the world, So thank you. We are also aware that you are trying to raise awareness to the barbaric industry of canned hunting in Africa and would you like to share with our readers about how they can help do this too?

A: I always believed our prime purpose in life is to help others and I have always found animals to have incredibly important role in my life and have been incredibly lucky in that I have been able to dedicate so much time to them.

My passion with wildlife was always immense, so much so I was very close last year to setting up my own wildlife reserve in France so that I could rescue neglected zoo wild animals, so when a colleague told me about a 13 year old Lion in Hwange National Park, whom was killed for sport by a hunter who paid around paid £55,000 to kill this majestic Lion I felt compelled to help change the laws. 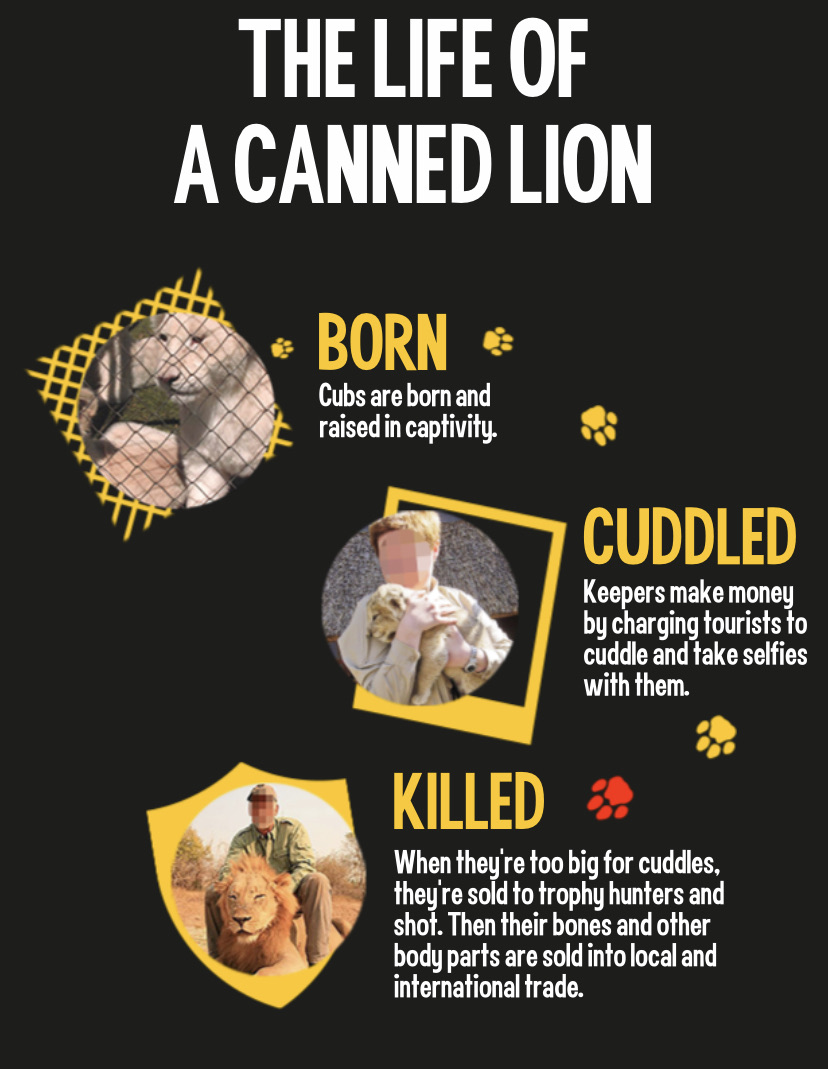 Let me share with you the life of a Canned Lion

... and please: It’s so important to sign our Petition below.

Sign our petition. This is a quick and easy way to show your support, and will demonstrate to the South African government just how serious we are about this issue.

Inside the canned lion hunting, cub petting and lion bone industry, based on the investigation by Lord Ashcroft for 'Unfair Game.' Feat. Ian Michler from Blood Lions. Presented by James Glancy - Planet SOS

12,000 Lions Are Being Farmed In Captivity To Be Shot Dead By Tourists 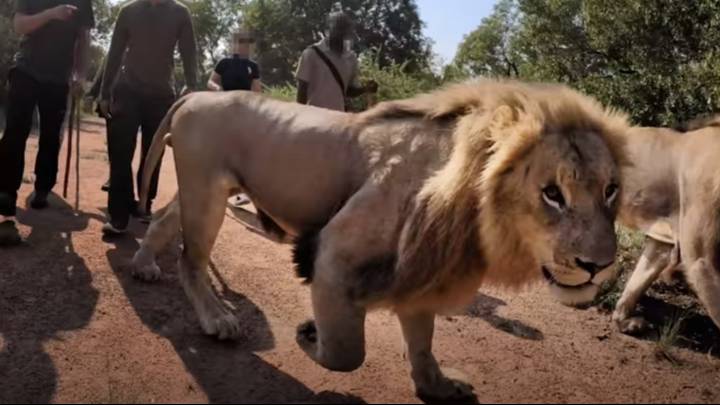 A new book and accompanying film from Lord Ashcroft details a shocking new revelation about the hunting industry in Africa, where thousands of lions are being farmed in captivity, only to be shot dead by tourists.

In his new book Unfair Game: An Exposé Of South Africa's Captive-Bred Lion Industry, businessman and philanthropist Ashcroft explores captive-lion breeding on the continent, having launched a major investigation into how many big cats are killed either for the bone trade or for trophy hunters in 'canned hunts'.

In an excerpt from the book, published by the Daily Mail, Ashcroft explained how there are now an estimated 12,000 captive-bred lions in South Africa - four times the number of wild lions. 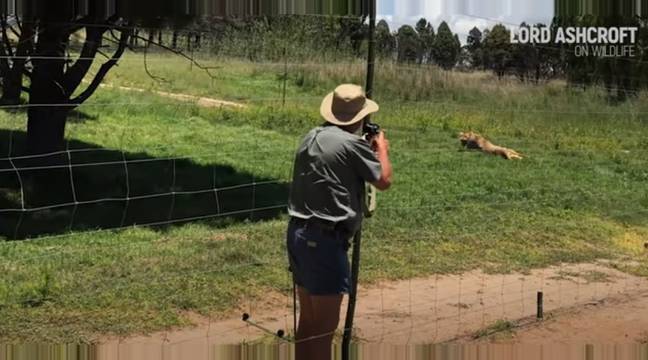 "It is no exaggeration to say that the abuse of lions in South Africa has become an industry," he said.

"Thousands are bred on farms every year; they are torn away from their mothers when they are just days old, used as pawns in the tourist sector and then either killed in a 'hunt' or simply slaughtered for their bones and other body parts, which are very valuable in Asia's so-called medicine market.

"In between, they are poorly fed, kept in cramped and unhygienic conditions, beaten if they do not perform for paying customers, and drugged.

"This sinister system has sprouted up in plain sight in South Africa, inflicting misery on this most noble of beasts on an unimaginable scale. 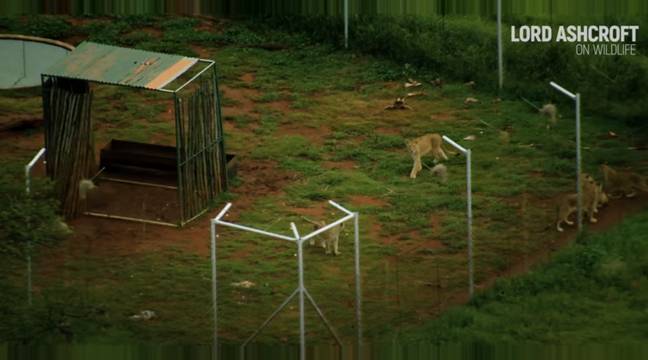 "My research suggests it is highly likely that there are now at least 12,000 captive-bred lions in the country, against a wild population of just 3,000. Yet, strikingly, just a small number of people - a few hundred - profit from this abusive set-up. Thanks to South Africa's constitution and laws, they seem able to operate as they wish." 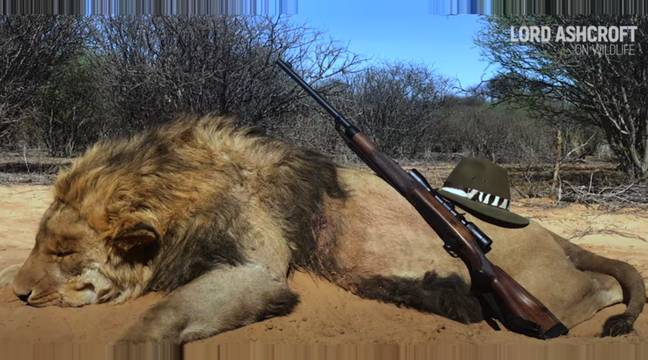 From their work, the team found evidence of a captive-bred lion being hunted and killed illegally using a pack of dogs, while a gruesome video shows two hunting lodge owners shooting a lioness in the tree, before shooting her another nine times as she dies 'in agony' on the ground. 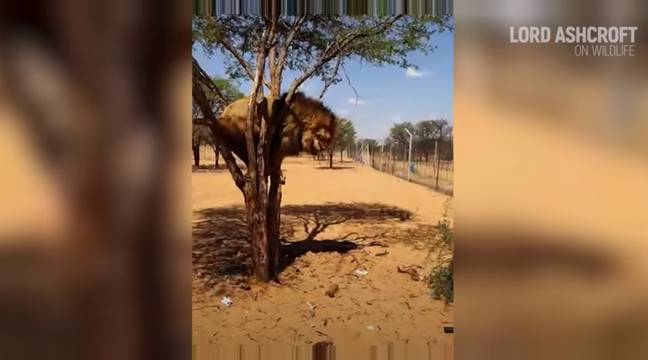 A distressed lion in a tree. Credit: Lord Ashcroft on Wildlife

Ashcroft also claims there has been a warning from experts that lion farming and the lion bone trade are likely to lead another major public health incident, possibly even 'another coronavirus-style pandemic'.

Lion bones are in high demand in the Far East, where they are believed to have medicinal properties and to act as an aphrodisiac - with a single lion carcass being worth thousands of pounds, and the bones from lions often made into 'cake' or wine.

According to the new publication, a captive-bred adult male lion with an impressive mane can fetch up to £40,000 from trophy hunters wanting to shoot it in a canned hunt.

But now Ashcroft is campaigning vigorously for captive-bred lion farming to be banned in South Africa. 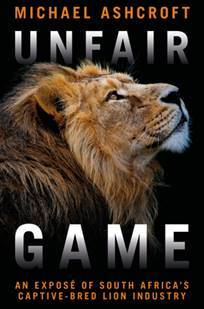 In a press release for the new book, from which he is donating all royalities to wildlife charities in South Africa, he said: "Lion farming shames South Africa, a country that I have loved visiting for many years. It's time to recognise that it is a cruel and barbaric industry which has no place in the 21st century."

Ashcroft also believes the UK Government must follow the lead of other countries, including the US, in banning the importation of captive-bred lion trophies and the trophies of other endangered species.

He added: "The British Government can't control what takes place within South Africa's own borders but it can show our opposition to lion farming. We must not be complicit in any way with this vile practice."

Unfair Game: An Exposé Of South Africa's Captive-Bred Lion Industry will be published on Tuesday 16 June.

Author of the book review:

Jess Hardiman is a journalist at LADbible who graduated from Manchester University with a degree in Film Studies, English Language and Linguistics - indecisiveness at its finest, right there. She also works for FOODbible and its sister page Seitanists, which are both a safe haven for her to channel a love for homemade pasta, fennel and everything else in between. You can contact Jess at .