UPDATE 15. February 2020 - 21h00 UTC: The WHO - 6 weeks after the outbreak of COVID-19 - has now finally an own mission on ground in China to investigate and verify the situation and the figures. COVID-19 until now allegedly claimed 1,527 deaths - except 4 still all deaths occurred in China (first death of an 80 year old Chinese in France is the first death outside Asia) - with 67,195 clinically diagnosed (but not necessarily confirmed by lab-test) total infection cases, of which most occurred in China and less than 700 cases in 27 other countries (no specific figures were provided for today).  By now 10,135 cases are closed (8,608 recovered) and 57,060 cases are active. COVID-19 seems to infect, affect and kill almost solely Far-Eastern genotypes. With Daily Cases Growth Factor and Daily Death Growth Factor believed both to be below 1.0 the danger appears to decline. China claims the outbreak is contained, but WHO does not agree with that statement. Under threats of serious punishments the returnees from the Lunar festival holidays in China have to quarantine themselves e.g. in Beijing for another two weeks and it must be noted that so far the Chinese Communist Party regime with the help of their army could enforce all their Orwellian orders without any real resistance. However, Chinese voices criticising the governmental response to the virus-crisis and the Big-Brother-Games could not be silenced all. China criticized at the Security Conference in Munich the alleged propaganda war launched by the USA against China. It is fact that no major media reported about the latest common flu outbreak in the USA which infected 15 million Americans, had at least 140,000 people seen hospitalized and more than 8,200 people were killed.

UPDATE 14. February 2020 - 12h00 UTC: China disclosed for the first time on Friday that 1,716 medical workers have contracted the COVI-19 virus and six of them have died. Army units were now dispatched to support medical staff in the overwhelming workload.The government is currently prescribing a combination of anti-viral drugs and traditional Chinese medicine to treat the sick. Reported numbers continued to climb disproportionally after the government changed the criteria. China on Friday reported 5,090 new coronavirus cases and 121 new deaths in the previous 24 hours, but nobody know which for which period this adjustment refers. However, COVID-19 now allegedly claimed 1,384 deaths - except 3 still all deaths in China - with 64,467 confirmed total infection cases, of which 59,823 occurred in China and 654 in 27 other countries. By now 8,549 cases are closed (7,165 recovered) and 55,918 cases are active. The shortage of the testing kits has meant many sick residents have been unable to seek treatment, with hospital admission contingent on the test result. Health workers can now treat more patients, but some have also questioned the reliability of the tests.

Disease outbreaks caused by wildlife trade are a global, not just a Chinese problem

It is February 2020 and the world is in the grip of another infectious disease outbreak. The disease, first reported from Wuhan, China, on 31 December 2019, concerns a corona virus which has been named COVID-19. The disease is spreading fast and experts warn COVID-19 might become a global pandemic.

On 26 January 2020 it became clear that COVID-19 originated from a seafood market in Wuhan where purportedly wildlife was sold illegally. Experts of the Chinese Center for Disease Control and Prevention (CDC) successfully isolated the virus in samples taken from the market.

On that same day China put in place a nationwide ban on wildlife trade in markets, supermarkets, restaurants, and e-commerce platforms.

Since the ban was established China launched an unprecedented crackdown on wildlife trade. Within a timespan of 20 days, Chinese authorities investigated 682 cases, sentenced 680 traffickers and confiscated 38,000 wild animals and 2,347kg of wildlife products.

The ban was announced to be temporary. However, pressure is building on China to make the ban permanent, both from outside and inside China. Outrage on social media by Chinese netizens in the wake of the virus outbreak indicate that support for wildlife consumption in China has reduced significantly.

On 10 February 2020 the National People’s Congress (NPC) of China declared it would revise wildlife protection laws and regulations in order to “toughen the crackdown on and punishment for the illegal hunting and eating of wild animals”. An official stated that “the supervision, inspection and law enforcement should be strengthened to ensure that wildlife trade markets are banned and closed.” It is still unclear what this legislative change will entail. Even so it is a promising sign.

Given the scale of the wildlife trade in China (both legal and illegal) it is good news for wild animals that China has acknowledged and is addressing the risks of disease transmission through the trade in wild animals. However, while the eyes of the world are on China and its efforts to contain the COVID-19 virus, it is important to understand that the spread of diseases from wildlife to humans through the wildlife trade is not a Chinese problem. It happens on all continents and is very much a global phenomenon.

Wildlife consumption is widespread across Southeast Asia, Sub Saharan Africa, Latin America as well as (though perhaps to a lesser extent) North America and Europe. The trade and consumption of wild animal meat (bushmeat) in Central Africa is estimated to be over one billion kilograms per year. Bushmeat consumption in the Amazon Basin is estimated to range between 67 and 164 million kilograms annually. Africa and Latin America are seeing a worrying surge in wildlife poaching in response to a sharply increasing demand from urban populations where wild meat consumption has become fashionable. Bushmeat is not only consumed locally and regionally. Europe for example is an important destination: A recent study, involving researchers from the Zoological Society of London, showed that illegal bushmeat is ‘rife in Europe’. The study estimated that as much as 270 tonnes of bushmeat might be coming through a single airport in Paris annually.

Since the 1990s scientists have documented the rising threat of emerging infectious diseases spreading among people and other animals, fuelled by human activities ranging from the bushmeat consumption and the wildlife trade to the destruction of wild habitats.

Scientists have confirmed that the majority of human Emerging Infectious Diseases (EID’s), viruses in particular, are of animal origin.  Furthermore, they have established that EID’s have increased in frequency, with the proportion of those emerging from wild animals increasing substantially over the last four decades of the twentieth century.

The origin of HIV is widely thought to be linked with the consumption of primates. Ebola outbreaks in humans have been traced to infected great apes hunted for food. The SARS coronavirus was associated with the international trade in small carnivores and bats.

The transmission of infectious agents due to wildlife trade is not limited to human pathogens: domestic animals as well as native wildlife are also heavily impacted. Examples include:

It is evident that the rise in emerging infectious diseases has a huge impact on public health and causes immense human suffering. Disease outbreaks have furthermore destabilised trade, have devastating effects on human livelihoods, and caused hundreds of billions of dollars of economic damage globally. In 2004 Newcomb estimated that the rash of livestock disease outbreaks around the world since the mid 1990s, including bovine spongiform encephalopathy, foot and mouth disease, avian influenza, and swine fever (but excluding HIV/AIDS) have cost world economies over $100 billion .

The cost of global biodiversity loss due to disease is yet to be assessed.

For decades scientists and conservationists have raised the alarm about the grave risks posed to public health, biodiversity and economies by the global wildlife trade. Until now governments have failed to take these threats seriously.

The COVID-19 outbreak appears to have succeeded in firing up the international debate on wildlife trade and consumption. It is hoped that governments, international organisations,  NGOs, the industry and other key stakeholders will have the wisdom to look beyond China and to acknowledge that this is a global problem that needs to be tackled on a global level. Unless decisive, holistic actions are taken to address the role of wildlife trade and consumption as a key mechanism for disease transmission, disease outbreaks associated with the global movement of wildlife will continue to occur and increase in impact globally.

Veterinary experts  have proposed taking precautionary measures focusing on wildlife markets to regulate, reduce, or eliminate the trade in wildlife in order to decrease the risks of disease for humans, domestic animals, wildlife, and ecosystems. Whilst a global ban is inconceivable, it is time to take an honest look at the wildlife trade and to weigh the benefits reaped by a relatively limited number of people in the industry against the immense costs to society as a whole and our natural world of continuing the unbridled exploitation of wildlife. 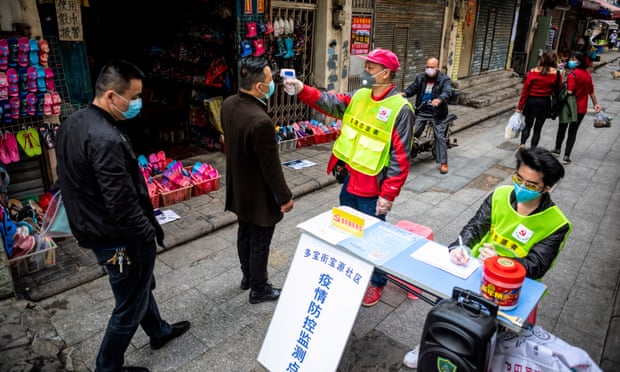 In this cell-phone footage, validated by AP, officials in hazmat suits forcibly evicting a man and a woman from their apartment, followed by a man resisting eviction and eventually being carried out in Kunshan, China, Monday, Feb. 3. 2020

In the video, the people can be seen being dragged away by officials in protective suits. Jiangsu Communication Broadcasting Station, an official provincial media outlet, on Wednesday published an article with photos of a woman and a man, who appeared to be wearing the same clothes as the people in the video, being questioned by local law enforcement officials in protective suits.

The article said the two, both using the family name Dong, had returned to their home in Kunshan, Jiangsu Province, from Hubei Province, of which Wuhan is the capital and where the coronavirus epidemic has been the most severe. According to the article, they traveled despite being required to quarantine themselves at home, and on Feb. 3 they were taken away by local epidemic prevention personnel.

Provinces and cities across China are requiring anybody who comes from Hubei province to self-quarantine for 14 days.

Experts believe that's how long it could take for symptoms to appear.

Millions of people remain under lockdown in Hubei, the landlocked province at the center of the coronavirus outbreak where residents are complaining of food shortages. 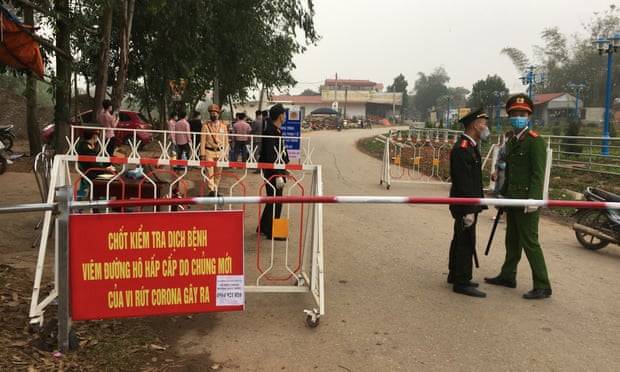 Vietnamese police wearing masks guard a road checkpoint outside Son Loi near Hanoi which is on lockdown due to coronavirus. Photograph: Yves Dam Van/AP