UPDATE 05. February 2020: Mike Love did not withdraw from the kill-4-sports-show - that means BOYCOTT!

Beach Boys founding members Brian Wilson and Al Jardine alerted fans Monday that they have no part in an appearance later this week (on 5th) by a version of the group fronted by cofounder Mike Love at a trophy-hunting convention where Donald Trump Jr. will be the keynote speaker.

Love’s touring edition of the Beach Boys, for which he holds the legal rights to the name, also includes longtime band member Bruce Johnston.

They are slated to play Wednesday, Feb. 5, at the Safari Club International Convention in Reno, where hunting enthusiasts can arrange trips to hunt exotic animals. Trump Jr. and his brother, Eric, are longtime trophy-hunting supporters.

“This organization supports trophy hunting, which both Al and I are emphatically opposed to,” Wilson tweeted on Monday. “There’s nothing we can do personally to stop the show, so please join us in signing the petition” protesting the private event at Change.org. - [PLEASE ALL SIGN ON !!!]

It has been brought to my attention that on Wednesday February 5, The Beach Boys touring group licensed by Mike Love are headlining at the Safari Club International Convention in Reno, Nevada... — Brian Wilson (@BrianWilsonLive) February 3, 2020

This organization supports trophy hunting, which Both Al and I are emphatically opposed to. There’s nothing we can do personally to stop the show, so please join us in signing the petition at https://t.co/vOUtJDq6t2

As of early afternoon Monday, the petition had surpassed 70,000 signatures toward a stated goal of 75,000 signees.

The petition, started by Eduardo Goncalves and addressed to Beach Boys manager Elliott Lott, asks, “Wouldn’t it be nice if all the Beach Boys, stayed away from those who kill for fun?”

“We the undersigned,” the petition states, “pledge to stop buying or downloading all Beach Boys music, going to Beach Boys concerts, and purchasing any Beach Boys merchandise until the Beach Boys withdraw from the SCI Convention and publicly state their opposition to this sick ‘sport’ of killing animals for ‘fun.’”

A spokesman for Brother Records Inc., the Beach Boys’ management company, declined to comment on Monday.

Wilson’s tweets made it clear that Love holds legal authority to use the Beach Boys name for his touring group.

Love attended the inauguration of Donald Trump as president in 2017. “I understand there are so many factions and fractious things going on — the chips will fall where they may,” Love told Uncut magazine at that time. “But Donald Trump has never been anything but kind to us. We have known him for many a year. We’ve performed at some of his venues at fundraisers and so on.”

One of the Beach Boys’ most highly regarded albums is “Pet Sounds,” released in 1966 with a cover photo showing the band members feeding goats at a zoo.

End Trophy Killing Where Cecil the Lion Was Brutally Murdered 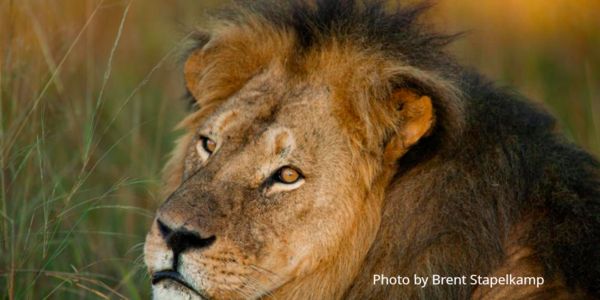 In July of 2015, U.S. American dentist Walter Palmer paid $50,000 to murder a beloved lion by the name of Cecil. It turns out that not only did this arogant man pay to lull a human habituated wild animal to his death, but he allowed him to suffer for over 12 hours with a chest wound. This is just the most public and horrifying example of the tragedy that is trophy hunting of endangered animals.

Sign the petition to urge the Zimbabwean government to end trophy hunting in and around Hwange National Park.

A new book is about to come out by a researcher who had been studying Cecil for over 8 years when he was murdered by Palmer. In a preview of the book, found here, you can read about some of the ways that Walter acted badly and the Zimbabwe government looked the other way. You can also read about his tortured last hours. The details around the case were reported many different ways and this book should set the record straight.

But one fact has never changed and that's that Walter Palmer lured 12-year-old Cecil to his death in a conservatory next to Hwange park where lions are studied. Then the hunters tried to hide what they'd done by removing the collar scientists used to study Cecil. The whole thing was criminal and disgusting and we must be better than this.

and the tell the Zimbabwe government that it's unacceptable that this happened and went completely unpunished and now we demand no trophy hunting in the area.