PROLOGUE: Only with the total withdrawal of the USA and other foreign powers from Iraq the urgently needed international collaborative cooperation in science and also in nature protection can resume.

Can you hear us now?

Over 4 Million People Joined March Against USA While

According to estimates of the Iraqi police commander Jaafar Al-Batat, over 1 million people Thursday demanded the departure of U.S. troops from Iraq with a march in Baghdad, which was convened by cleric Muqtada Al-Sadr three weeks after the murder of Iran's General Qasem Soleimani.

At the country's capital, streets were filled with an endless column of people who paraded to express their repudiation of the U.S. military presence.

Banners showed slogans such as "No, No to the U.S. and Yes to Iraqi sovereignty," "The willingness of free nations is stronger than the U.S. aggression," and "Global terrorism is made in the U.S."

While some protesters burned images of Donald Trump, others marched raising photos of the U.S. president's face crossed out with a red "X".

"We have not obtained anything from the U.S. except problems, wars, and sieges," Ziyad Qasim Abdullah, a 39-year-old chauffeur, said.

The U.S. has "created sectarian conflicts in Iraq and divided people to plunder the wealth of our country," he added and explained that he wants to "expel the occupation forces" from his country. 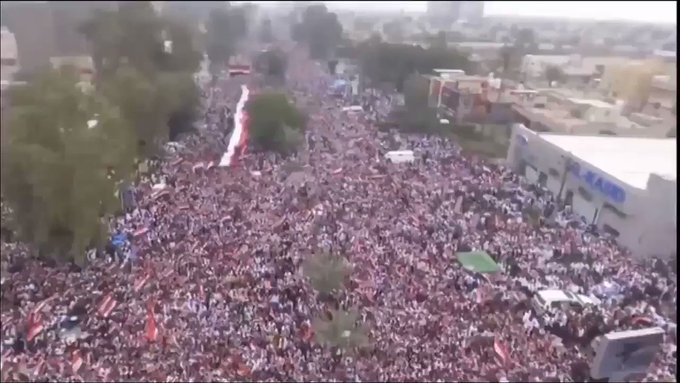 Initially, the U.S. government justified the presence of its troops in Iraq by arguing the fight against the Islamic State, which managed to control large areas of Iraqi territory in 2014.

Since the defeat of this radical group in 2017, however, those troops have not been removed from this country.

As a result of the events unleashed by Jan. 3 bombings, in which Iran's General Qassem Soleimani was killed, the Iraqi parliament approved a procedure for the departure of foreign troops.

"If the U.S. meets these demands, then it is not an aggressor country," Al-Sadr said and added that if the U.S. will become a "hostile country" if it violates the conditions specified for its departure.

The highest Shiite religious authority in Iraq, Ayatollah Ali Al-Sistani, also reaffirmed today "the need to respect the sovereignty of Iraq, the independence of its political decision, and its territorial unity."

For his part, Iraq's President Barham Salih posted a photo of Friday's march on social media and wrote that Iraqis deserved a "fully sovereign state that serves its people."

Yankee go home: Watch: Huge protests against the US presence in Iraq. Main theme 'Get out #America'.

Why Doesn’t the US Move out Despite the Iraqi Parliament’s Decision?

The stakes are too immense for the US. It has all to do with their move towards world hegemony by territory and by finance – meaning by the U.S. dollar.

Why doesn’t the U.S. respect the decision made by the Iraqi Parliament and move out of Iraqi territory? – The short answer is, because the U.S. doesn’t respect anybody’s – any country’s – decision or sovereignty, as long as it doesn’t meet their objectives.

Now, the U.S. is steadfast and will not leave the region. Already President Assad has requested that the U.S. leave Syrian territory. They didn’t. The stakes are too immense for the US. It has all to do with their move towards world hegemony by territory and by finance – meaning by the US dollar.

The conflict with Iran is not over. By any means.

We are just experiencing a respite for regrouping – and subsequently continuing and escalating the conflict. U.S. bases in Iraq and military presence, at present more than 5,000 troops, are the most convenient means of force against Iran.

Other than controlling the rich and highly strategic territory of the Middle-East as an important step towards world hegemony, the U.S. continuous presence in the region also has to do with profits for the war industry and with the price and control of hydrocarbons, especially gas.

We have seen, soon after the cowardly murder of General Qassem Suleimani, the share values of the war industry jumped up, of course in anticipation of a hot war – and huge weapons sales. The war industry profits insanely from killing. Wars and conflicts are increasingly what drives the western economies. Already in the U.S. the war industry and related industries and services make up for about half of the country’s GDP. The U.S. economy without war is unthinkable. Therefore, the Middle-East is a perfect eternal battle ground – a sine qua non for the west. War is addictive. The western economy is already addicted to it. But most people haven’t realized that – yet. Revolving and renewed conflicts and wars is a must. Imagine, if the U.S. were to leave the Middle-East, PEACE might break out. This is not admissible. Soon, your job my depend on war – if you live in the west.

Then there is the Iranian gas. Daily 20% to 25% of all the energy consumed to drive the world’s economy – including wars – transits through the Golf of Hormuz which is controlled by Iran. Immediately after the heinous murder on General Suleimani, the oil and gas prices spiked by about 4%, later declining again. This, in anticipation of a major conflict which could have Iran reduce her gas production, or block the passage of Hormuz. In either case a collapse of the world economy could not be excluded.

As a parenthesis – it is so absolutely necessary that the world frees itself from this nefarious source of energy – hydrocarbons – and converts to other, cheaper, cleaner and FREER sources of power to drive our industries and activities. Like solar energy of which Mother Earth receives every day more than 10,000 time what it needs for all her industrial and creative activities on every Continent.

The U.S., with a flailing multi-trillion fracking industry which just failed the European market, due Russian gas via Nord Stream2, and just inaugurated Turkstream, would like to control the price of hydrocarbon, so as to revive the highly indebted fracking industry. What better way than to control Iran, and her enormous reserves of gas, shared with Qatar?

Then there is the close alliance between Iran and China – China being Iran’s largest customer of gas. China is perceived by Washington as a deadly competitor, and barring her from the energy that makes China’s economy thrive, is one of those devilish objectives of the United States. They are unable to compete on an even playing field. Cheating, lying and manipulating has become part of their, and the western life style. It is deeply ingrained in western history and culture.

Of, course there are other ways of supplying China with the hydrocarbons she needs. Russia with the world’s largest gas reserves, could easily increase her supplies.

In brief, the U.S. is unlikely to leave the Middle-East, although some generals – and even some high-ranking Pentagon brass – believe this would be the smartest thing to do – they see the light, and the light is not war, but PEACE.

How to Get the US out of Iraq

What could Iraq do to get the U.S. out of Iraq and eventually out of the Region? After all, the Iraqi Parliament has taken a majority decision to regain Iraq’s sovereignty and autonomy, without foreign troops. Most countries with troops stationed in Iraq respect that decision. Denmark, Australia, Poland and Germany are preparing to move their troops out of Iraq. Only the UK with her 800 military men and women decided for now to stay alongside the U.S.

Iraq may want to strengthen her alliance with Russia and China, hereby increasing the pressure on the U.S. to honor Iraq’s sovereign request for the U.S. to leave. How much that would take to materialize, if at all, is a difficult question to answer. Maybe ‘never’. Except, if the U.S.-dollar hegemony over western economies can be broken. And at the moment, a strong down-turn of the dollar’s role in the world economy is showing, as the western world is increasingly seeking ways to de-dollarize her economy and to associate with the East, led by China and Russia, where de-dollarization is advancing rapidly.

When that happens, chances are that the U.S. of A’s dictates over the nations of the world will be mute, will not be listened to anymore, and that Washington will have to rethink its future – and very likely a U.S. presence in the Middle-East will be history.

RELATED:
Why Killing Soleimani has Further Destabilized the Middle East