According to a copy of Adani's water licence signed last Wednesday and obtained by Fairfax Media, the $16 billion Carmichael mine merely needs to monitor and report the amount of water it extracts under a permit that runs until 2077.

The mine – one of nine proposed for the Galilee Basin west of Rockhampton – can conduct its own review of its groundwater model without independent or government oversight.

There are also no impact levels specified that will trigger a halt to mining, and the company is able to offset any significant water loss elsewhere, the licence shows.

"It's bloody-minded and barbaric," said Bruce Currie, a grazier who lives in the region and has joined legal action against Galilee mines. "This is going to definitely impact on the integrity of [the Great Artesian Basin]."

According to a supplementary environmental impact statement, the mine will draw 26 million litres of water a day from its pits by as it ramps out annual production to as much as 60 million tonnes.

"In granting this licence, the Department of Natural Resources and Mines has carefully considered a broad range of information," a spokesperson said, adding modelling shows that as much as 4.55 gigalitres of groundwater could be taken per year.

"Adani will also need to establish make-good agreements with groundwater users who could potentially be affected by changes to water availability or quality," the spokesperson said. Some 100 conditions are in place to ensure water resources are protected.

The licence, though, would not be subject to the new Water Act Referral Panel set up to ensure "the sustainable management of water in Queensland".

The opening of mining in the Galilee Basin is shaping up to be one of country's big environment battles. Proponents say it will generate exports and bring jobs to a depressed part of the state, and even reduce carbon emissions if it displaces the use of dirty coal in India or elsewhere.

Opponents, though, argue the coal is largely poor quality and the basin will require huge subsidies to become viable. Burning the fuel will also release a "carbon bomb" that will contribute to harming the Great Barrier Reef, which is already being hammered by unprecedented coral bleaching blamed on global warming.

Unlike other controversial mines, such as the New Acland coal mine planned for the Darling Downs, Adani's water usage is not subject to public submissions and appeals, said Jo Bragg, chief executive of Queensland's Environmental Defenders Office.

Groundwater evidence is often the most controversial feature and public scrutiny is often the most significant aspect of any review, Ms Bragg said. "It's a matter of grave concern that there's not that opportunity."

It was "absolutely anomalous" that the Carmichael mine – which will dwarf New Acland's output of about 7.5 million tonnes a year – should go through with a less vigorous process for its water licence, she said.

Carmel Flint, a campaigner for anti-mining group Lock the Gate, said the open-ended water licence for Adani amounted to a "free kick" to take water from important aquifers such as the Dunda Beds and Clematis Sandstone formations.

Water from the Great Artesian Basin "is just essential for farming communities", Ms Flint said. "Without the water, their businesses are basically finished." 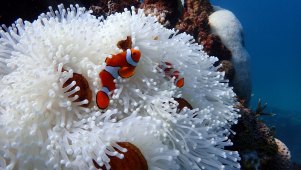 Coral crisis: the Great Barrier Reef needs us to speak up

Mr Currie, who runs about 1700 head of cattle "in a good season" over his 25,000-hectare property, said Adani was "the linchpin" to the basin's mines.

If it proceeded, "a lot of the others will go ahead", worsening the groundwater disruption, he said.