Active Altering of Weather and Climate

UPDATE 16. November 2021: Vancouver is now completely cut off from the rest of Canada by road - WeatherMod?

Just like the weather, climate changes, of course. No reasonable person can argue otherwise.

This change can be natural or unnatural (i.e. artificially created by corporations and governments). Drop a few nuclear bombs here and there and you’ll successfully plunge Earth into a nuclear winter for hundreds of years. Therefore, it’s completely possible for governments and big corporations to alter the Earth’s climate.

Governments and corporations are already altering the weather EVERY DAY by injecting chemicals into the sky to make it rain or snow through a process called “cloud-seeding.”

The method employs planes that are fitted with flares loaded with salt crystals and other chemicals that are fired into warm clouds that have an updraft or rising current of air. The updraft then consumes the salt crystals into the cloud which causes tiny particles of water to collide becoming heavier and then falling as rain.

American corporations like insurance companies in Alberta are funding cloud seeding projects in order to lessen damage claims. Idaho Power Company, for example, is supporting cloud seeing to bring more snowfall during the winter. Wineries in Argentina have also used cloud seeding to prevent hail from damaging their vineyards. Governments like Dubai are constantly altering weather through cloud-seeding to make it rain over their dry deserts.

Yes, corporations and governments are actively manufacturing global warming by orchestrating bushfires around the world like the ones currently raging in Australia and by forcing us to use fossil fuel and petroleum products. The endgame of corporations-made global warming is to achieve these two primary goals:

2. Accelerate the melting of the Arctic for cargo ships to pass across this new trade route through the Bering Strait. These waterways are highly strategic economically, politically, and militarily, which is why the U.S. Navy is updating its Arctic Strategy, why China has drawn up a Polar Silk Road whitepaper, and why Russia seeks to solidify its control of, and successfully monetize, the route that traverses 3,000 nautical miles along its northern coastline.

UAE-Arabs Mess With The Weather

Vancouver has been completely cut off from the rest of Canada

Probably due to a weather mod attack

Yesterday I saw a post by someone saying they were going to get 15 centimeters of rain in Vancouver in a short time and that he was getting ready for it. it always rains in Vancouver, so I did not pay it a thought. Today the results are in, and it was a LOT more than 15 centimeters of rain. It was so bad that every bridge and road into the entire Vancouver metro either washed out or got covered by a landslide. Even the rail lines are destroyed. There is no way in or out of Vancouver at this time. I don't believe that could happen naturally, Vancouver is well equipped for rains and has precip levels well above practically all rainforests. They had extra water handling capacity like no other place and this STILL happened.

I blew this off and was not paying attention just because Vancouver is so rainy, so I have only suspicions this was man made, it is going to be tough to prove. But it sure matches the unprecedented deluges that have happened elsewhere in the past year. I would not be surprised if they dumped California's water on Vancouver to accomplish this.

The internet is out, so not many pictures are making it out of there. Here are a couple:

OPINION: Canada could probably have Vancouver accessible within a day or two if the corruption was not so extreme that opportunists will rub their hands in anticipation of money rather than focus on getting things going again.

There is no way to get gasoline into the city at this time with the pipeline shut down and railroads washed out, on top of roads gone. Most stores can only take cash. Most ATM's are shut down. This is a developing situation.

There is currently no way to drive between Vancouver and the rest of Canada.

The Lower Mainland and Fraser Valley are now completely cut off from the rest of British Columbia and the country by road. 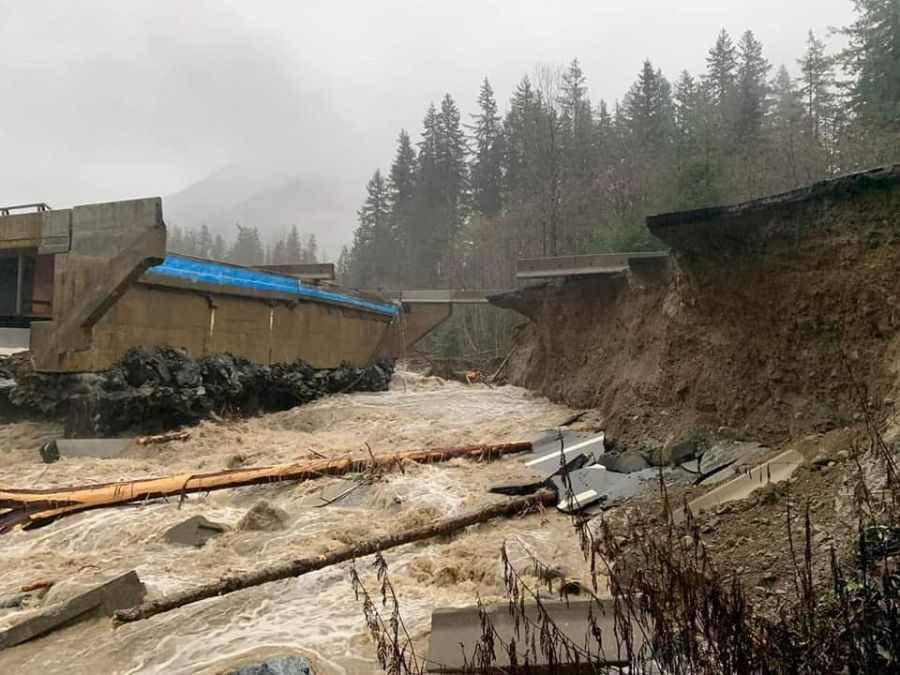 The southbound lanes of the Coquihalla Highway have been completely washed out near Othello Tunnels.

Flooding and mudslides had closed most routes between the coast and BC Interior over the past 24 hours, but the back route through Whistler on Hwy 99 remained open this morning.

That changed shortly after 11 am, when DriveBC reported that a mudslide 42 kilometres south of Lillooet had shut down Hwy 99 as well.

The only way to drive between the coast and the rest of Canada at this time is through the United States.

However, Washington is also seeing highway closures due to the inclement weather and residents would need a COVID-19 test to re-enter Canada.

Here’s a full list of mainland BC highways currently closed: