Elephants As Hostages in Kenya

It started with a phone call. The man on the other end of the line reported seven elephants stuck in the mud on the community side of the 164km West Laikipia Fence, near a place called Pesi. The news was not promising – we needed to make a plan – quickly!

Word had already reached the Kenya Wildlife Service (KWS) and they were on their way to the scene – a two hour drive away from Nanyuki, where Space for Giants (SFG) offices are located. We jumped in a vehicle and headed into the bush as we communicated with our partners at Lewa Wildlife Conservancy and Ol Pejeta Conservancy.

As we neared the scene, getting hopelessly lost on the narrow tracks between maize fields, the story changed. The elephants were not stuck – the community was holding them hostage.

The moment we reached the dam we were mobbed by several hundred members from the local community. We spotted the KWS senior warden for Laikipia County trying to placate a group of 50 men who were surrounding him. He had his hands full. 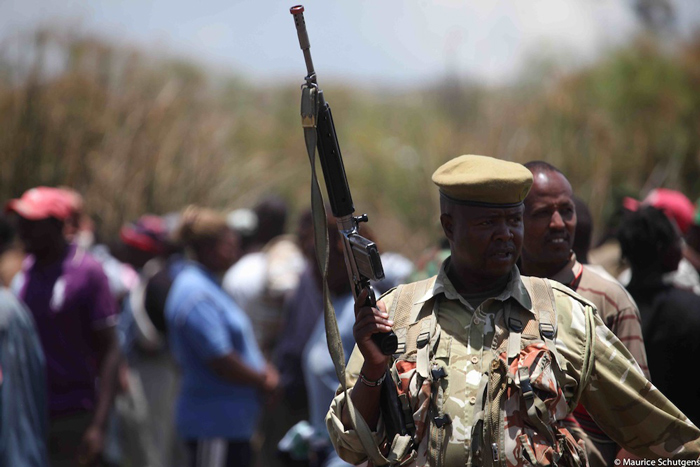 We pushed our way through the crowd to reach the edge of the dam and assess the situation. One boy of about 10 years of age stopped us, “elephants eat my maize,” he mumbled in broken English. 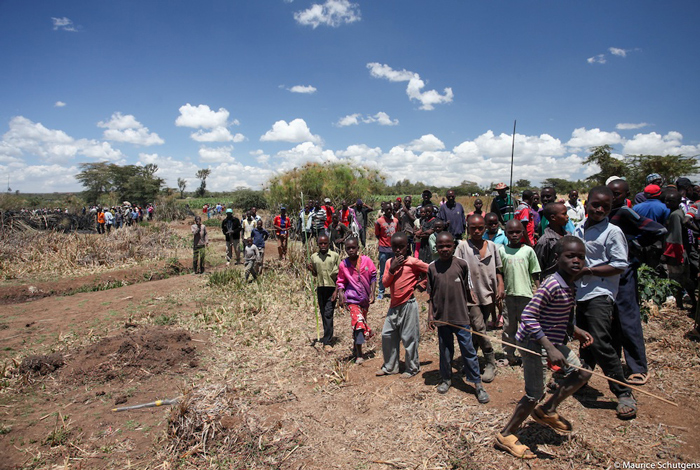 Now we understood. These seven elephants, all males, all known fence breaking elephants to SFG researchers, had broken through the West Laikipia fence that is supposed to separate community land from large-scale ranches, where wildlife is tolerated. The elephants had smashed through the fence, entered the community land and destroyed a large crop of maize. The villagers were furious, understandably so. They had seen their livelihoods destroyed before their eyes. They wanted compensation. They wanted these elephants dead.

Human-elephant conflict in the Laikipia area is amongst the worst in east Africa and probably the most severe in Kenya. In 2007, SFG estimated that crop raiding by elephants had cost local communities over a US$1 million in lost revenue. These losses are catastrophic.

The KWS rangers had the situation under control – but it felt like a time bomb. You could feel the tension in the air. All the villagers were armed with sticks and machetes, demonstrating angrily at the elephants that huddled together in the dam no more than 50 metres away. It would not take a lot to see this situation erupt into violence and bloodshed. 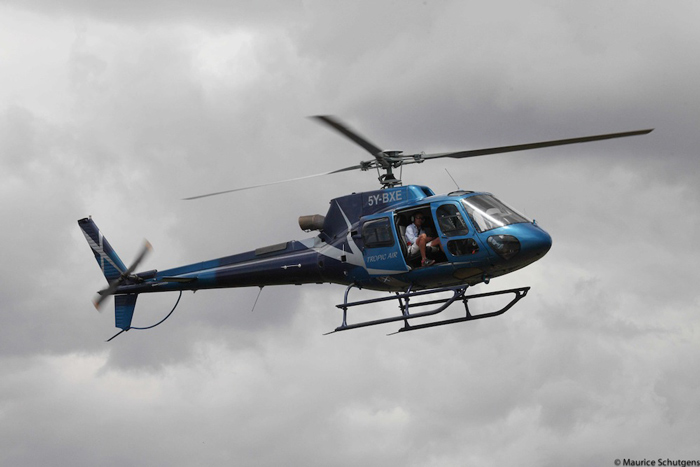 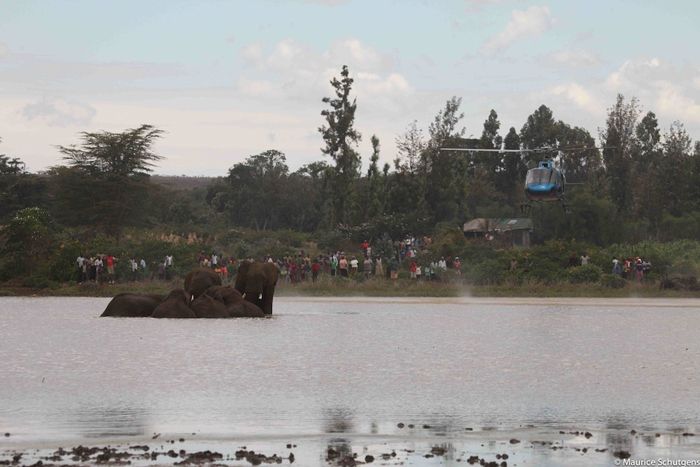 The arrival of the helicopter sent the crowd into a frenzy – it was there to help the elephants and not them. The KWS did well to control the crowd. But their increasing frustration was now aimed at the elephants who were eager to leave and were approaching the edge of the dam. The villagers mobilised themselves and set all the vegetation surrounding the dam on fire. A gang of 30-50 men started throwing stones. The crowd screamed and whistled. The elephants were trapped – and they knew it. They retreated and looked for another way out, only to be met with the same treatment. The panicked elephants huddled together in the centre of the dam, unsure of what to do as smoke filled the air and stones continued to splash around them. 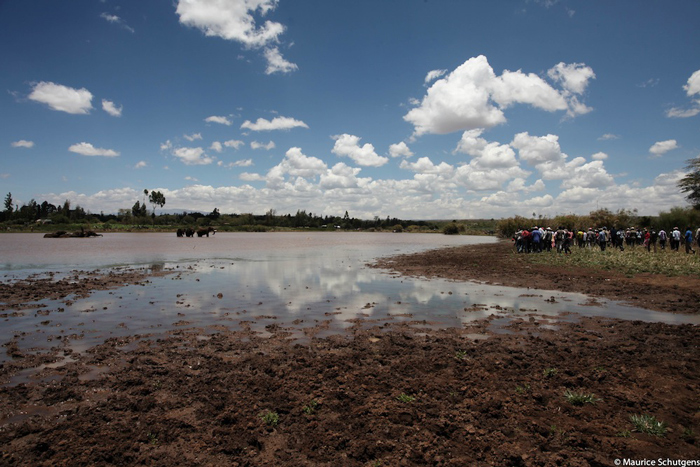 There was no way of stopping the crowd from doing this – by now they numbered at least 400 – a few rangers with guns was not going to intimidate them. The helicopter attempted to push them away by flying low overhead but it did nothing but fuel their resistance. It was a standoff. 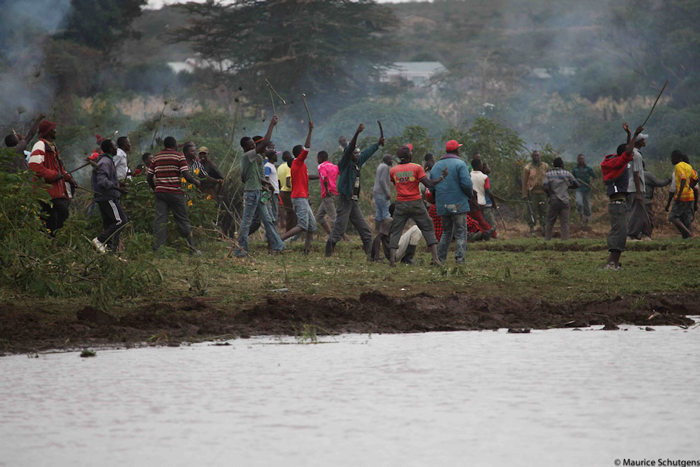 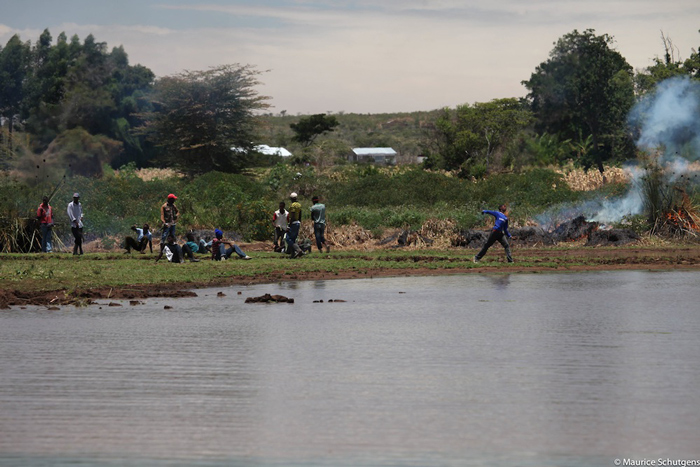 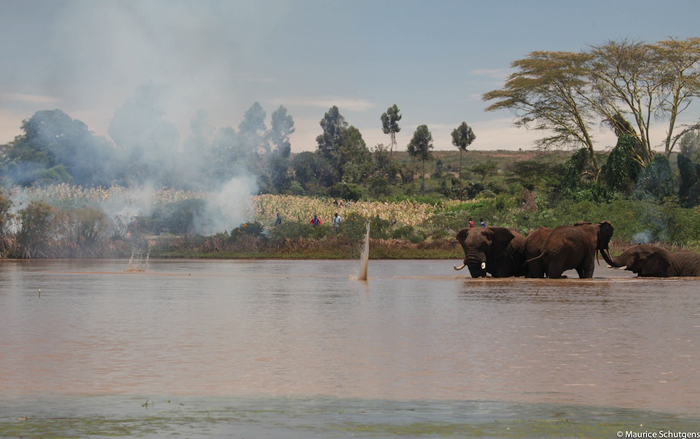 Suddenly one of the elephants – the one that had been attempting to escape for hours already, made his move. It had had enough. It was showered in stones and sticks as it reached the shallows, fires roaring in the background. It charged into the crowd that scattered before it. We lost sight of it immediately amongst the maize. 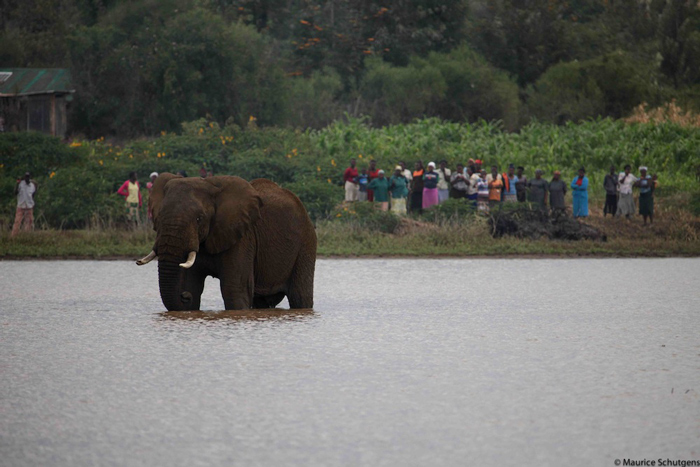 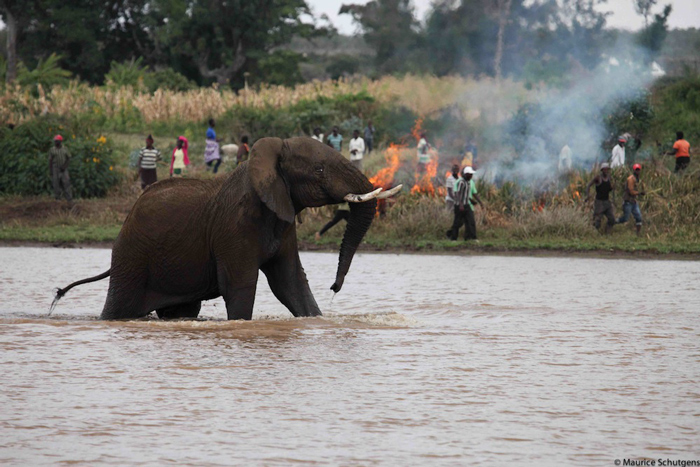 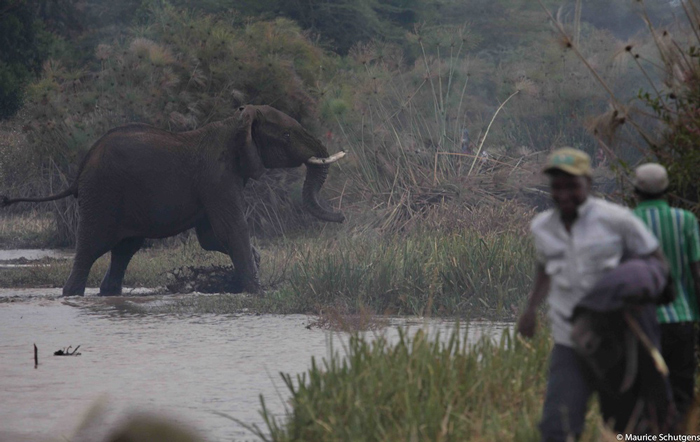 The Tropic Air helicopter reacted quickly and the experienced pilot managed to steer it away from the fleeing crowd and away to safety.

The courage of this elephant seemed to infect the three remaining elephants. As the helicopter returned, the police and KWS helped disperse the individuals that were trying to prevent the elephants from escaping, and the helicopter was able to guide them out of the dam. Nevertheless the remaining three elephants were in no mood to move. Stubbornly they huddled together and waited for night to fall. Under the cover of darkness they slipped away unharmed.

The whole incident was bittersweet. There are no winners here. We are delighted all the elephants got away largely unharmed but this incident illustrates the true state of affairs in Laikipia County. Local communities living side by side with these giants suffer significant losses on a daily basis and they have little reason to value elephants. When elephants raid their farms, their complaints and requests for compensation fall on deaf ears – when an elephant is in danger there is a monumental response from both the public and private sector. The inequalities are all too clear. 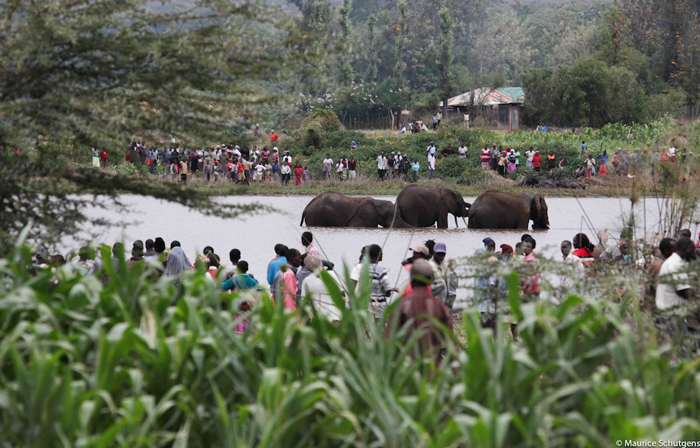 The rehabilitation of the West Laikipia fence. There has never been a more pertinent example for the need of a fence to separate man and beast. In Laikipia, the peaceful coexistence that we as conservationists strive for is dependent on a barrier made of wire, posts and 8,000 volts. It may not be pretty – but it works.

Space for Giants is an international conservation charity that operates in Kenya through a local charitable trust with an independent board. SFG also focuses on mitigating human elephant conflict in Laikipia County, securing space for these giants to roam and training up the next generation of conservationists.

Maurice Schutgens - Born in the Netherlands but raised at the end of a tarmac road in a remote Ugandan village, Maurice was always going to end up living in Africa. After a brief stint in Europe he returned to this great continent to pursue a Master's in Conservation Biology at the University of Cape Town, which was followed by several years of traipsing across the globe in search of adventure and stunning wild places. For the last few years Maurice has been based in Kenya and is working towards securing a future for African elephants and the landscapes on which they depend. He is a passionate conservationist, amateur explorer and his camera is always with him! You can follow more of his adventures on Facebook, Instagram, and on his website.

Unless People have to Eat - Wildlife will Die

CONservation or Conservation in Africa