The Universe is out there, waiting for you to discover it.

Our Universe has been around for 13.8 billion years since the Big Bang. This timespan is so incredibly long and so far outside our normal human experience that most of us can't even wrap our heads around it.

Speaking about events that happened thousands, millions, or billions of years ago might all seem unfathomably ancient, but they're as different from one another as they are from what happened this past year.

However, we can leverage a fun thought-experiment to help us wrap our heads around the history of the Universe: imagine that all of it — all 13.8 billion years — were compressed to fit into a single calendar year.

Each "day" on that calendar would last around 38 million years, and a single human lifetime would last just about 0.2 seconds, on average. If this were how things truly unfolded, December 31st would be the most important date of all.

The history of our Universe would begin with the start of the hot Big Bang on January 1st, followed by the Universe expanding, cooling, and gravitating ever since.

The first stars would form on January 3rd, with the first galaxies forming a few cosmic days after. By the end of January, the first galaxy clusters are starting to form, followed by star formation reaching its peak in mid-March. 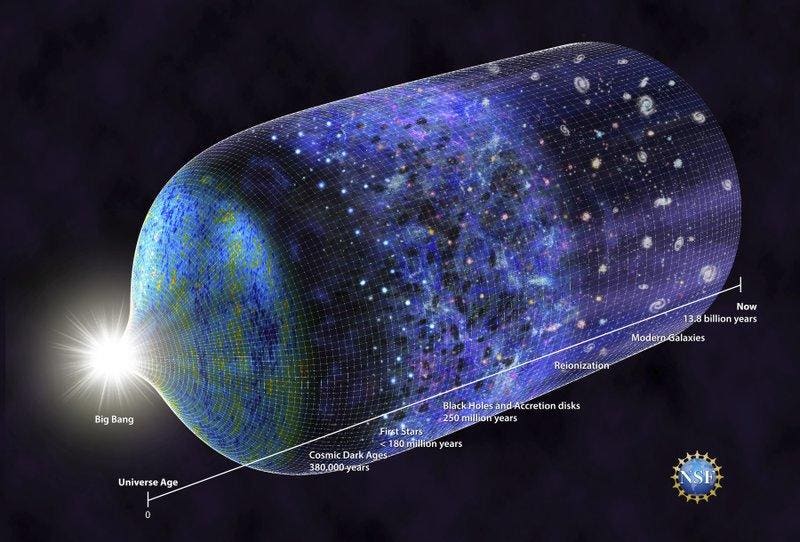 Our entire cosmic history is theoretically well-understood in terms of the frameworks and rules that govern it. It's only by observationally confirming and revealing various stages in our Universe's past that must have occurred, like when the first elements formed, when atoms became neutral, when the first stars and galaxies formed, and how the Universe expanded over time, that we can truly come to understand what makes up our Universe and how it expands and gravitates in a quantitative fashion. The relic signatures imprinted on our Universe from an inflationary state before the hot Big Bang give us a unique way to test our cosmic history, subject to the same fundamental limitations that all frameworks possess. Nicole Rager Fuller / National Science Foundation

At the end of June, the matter density drops enough that dark energy's effects begin to show and the Universe begins accelerating, sealing our cosmic fate. In early September, the Sun and Earth form, with the Moon forming from a giant impact about 1 cosmic day later. And yet, Earth's rich biological history only gets familiar towards the very end. 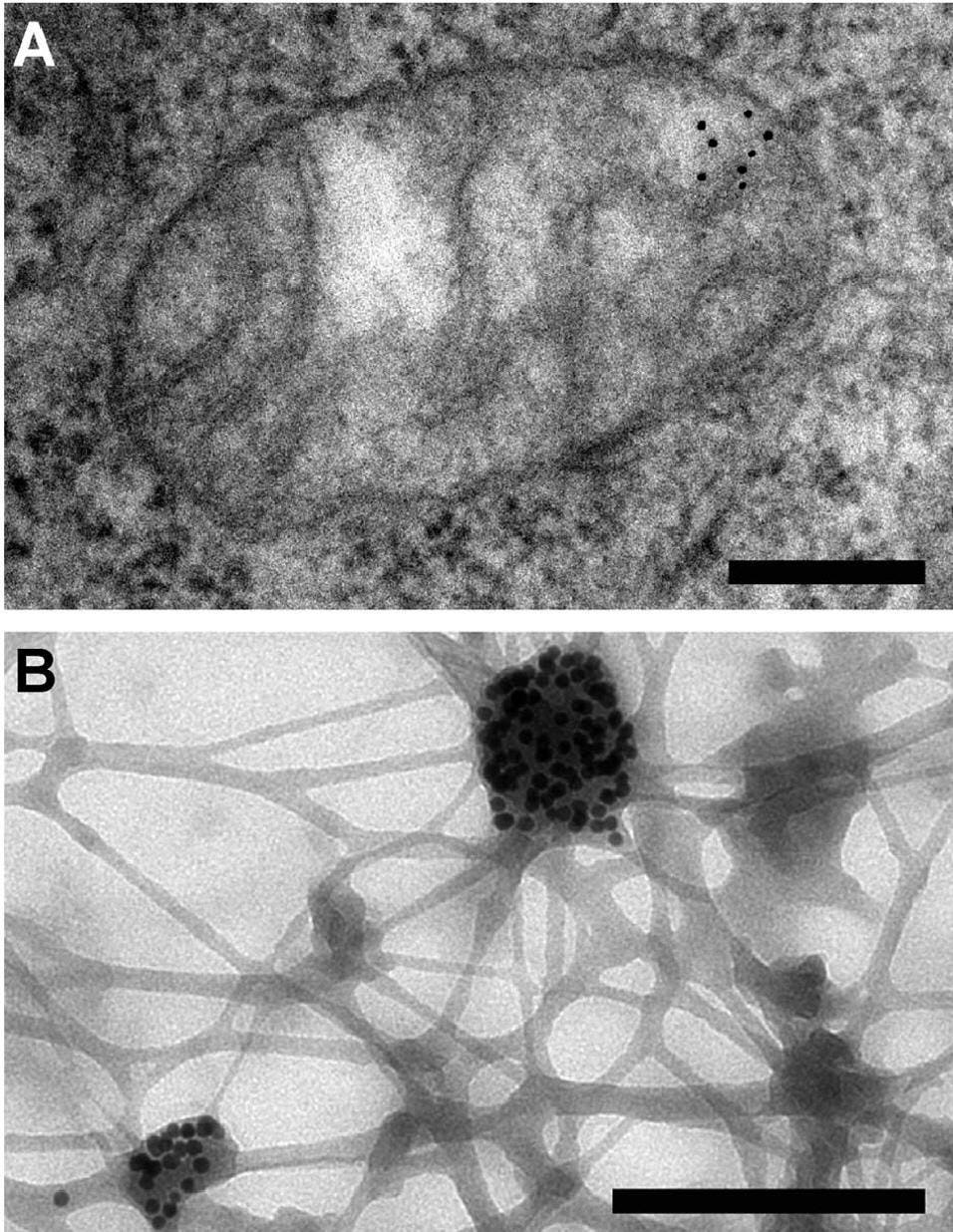 Mitochondria, which are some of the specialized organelles found inside eukaryotic cells, are themselves reminiscent of prokaryotic organisms. They even have their own DNA (in black dots), cluster together at discrete focus points. With many independent components, a eukaryotic cell can thrive under a variety of conditions that their simpler, prokaryotic counterparts cannot. But there are drawbacks to increased complexity, too. Francisco J Iborra, Hiroshi Kimura and Peter R Cook (Biomed Central LTD)

The first sexually reproducing organism, a single-celled eukaryote, doesn't evolve until December 2. The Cambrian explosion occurs on December 17. A giant impact occurs, rendering the non-avian dinosaurs extinct, on the morning of December 30th. But December 31st, which wouldn't even see the first Homo sapiens appear until 11:53 PM, is truly the most important day as far as our story is concerned.

As the clock passes midnight on December 30th, the world has largely moved on from yesterday's mass extinction event. Primates, rodents, lagomorphs, and many other forms of mammals — placental mammals, marsupials, and even egg-laying mammals — have taken that opportunity to diversify and fill every niche available. Wet-nosed and dry-nosed primates have already split, and the dry-nosed primates, right at (or perhaps just before) the start of December 31, split into New World and Old World monkeys. 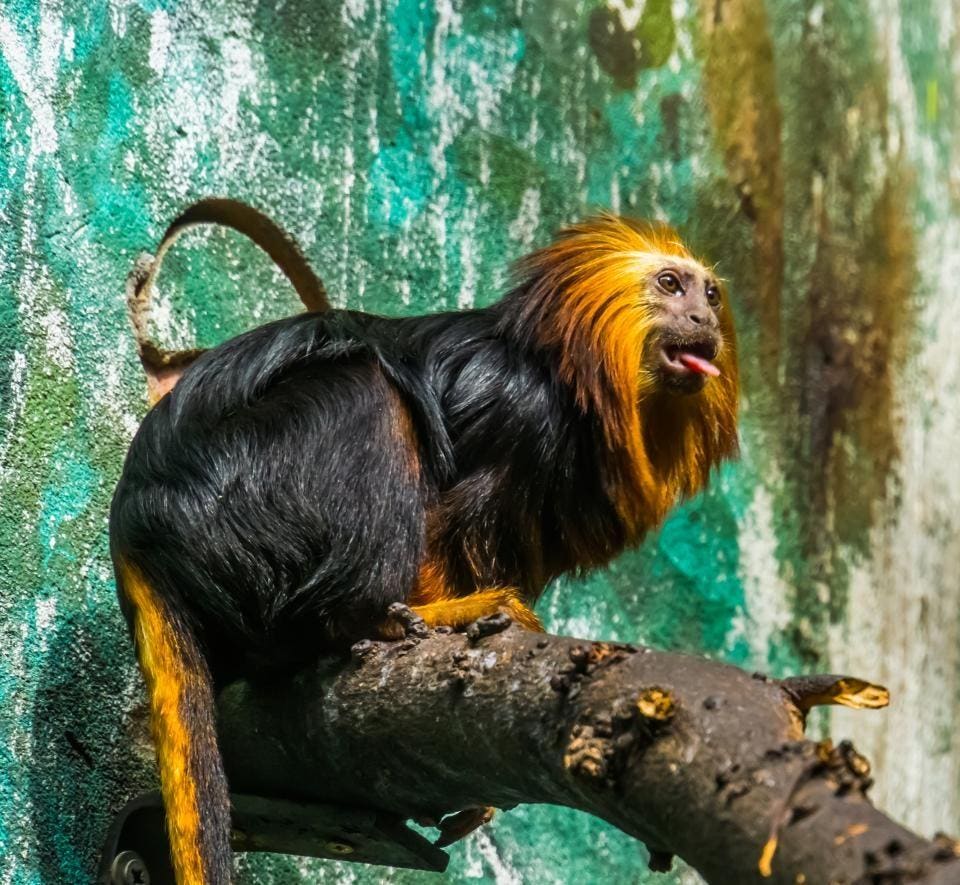 The golden-headed lion tamarin is an example of a New World monkey. This endangered species of animal is part of a lineage that split off from the Old World monkeys that humans are a part of some 40 million years ago, or right around the start of December 31 on our cosmic calendar. Getty images

The Old World monkeys continue to occupy a variety of niches, living mostly in the trees and diversifying in terms of both size and physical appearance. At about 8 AM on December 31, the first apes arise, splitting off from the remaining Old World monkeys at this time. The apes — defined by the complete lack of a tail of any type — would go on to give rise to many of the close relatives of humans that survive today: both the lesser apes and the great apes.

Right around noon, the earliest ape to split off from the Old World monkeys — the Gibbon — arises. About 2 hours later, the first great apes arose, with the Orang-utan branching off at around 3 PM and spreading into southern Asia. The other great apes remained in Africa, with the largest primate of all-time, Gigantopithecus, arising at about 6 PM. 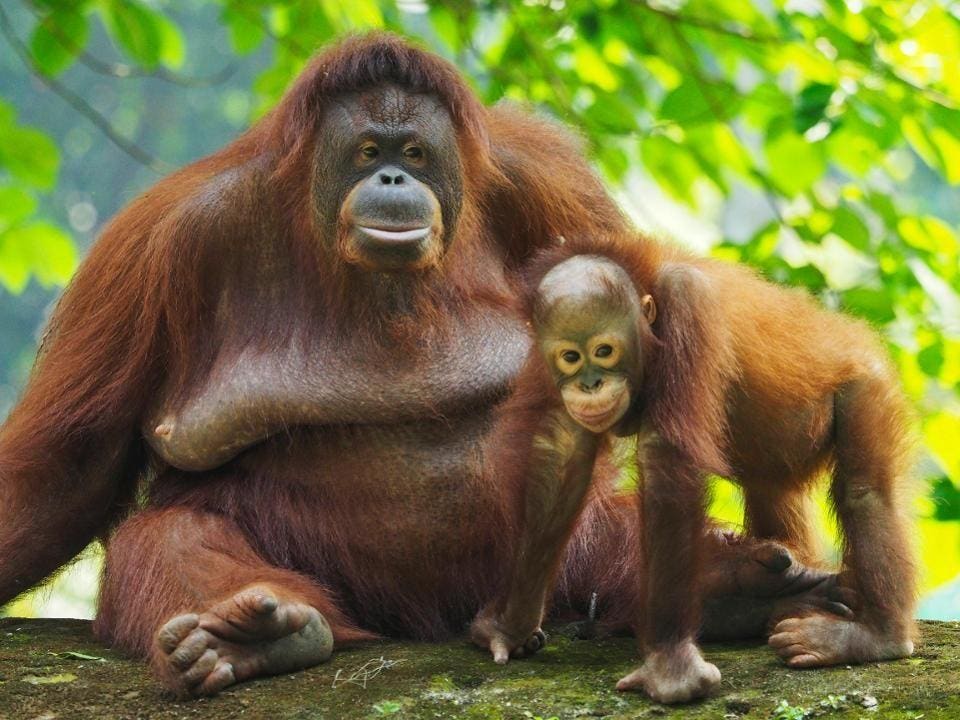 The Orang-utans are some of the earliest great apes to split off from our hominid ancestors, which they did some 16 million years ago. Although they are true great apes like we are, having no tails, they are less closely related to us than gorillas, bonobos, chimpanzees, or any of the later-emerging members of the family hominidae. Getty Images

At around 7:30 PM, the gorilla branched off from the other great apes, while a tremendously important evolutionary split occurred at about 8 PM: the split between the chimpanzee/bonobo branch and the branch of the great apes that would give rise to humans. The chimpanzee/bonobo branch remained unified until about 10:30 PM, with the extant chimpanzees and bonobos surviving as humanity's closest living relatives.

That's because all of the other, more direct ancestors of human beings, despite taking a rich evolutionary path before they arrived at us, no longer survive. In our evolutionary ascent, every member of the same family, genus, and species of human beings has been a casualty of both nature and our own activity. While chimpanzees and bonobos remain, we have no living relative that we share an evolutionary history with prior to 8 PM on December 31. 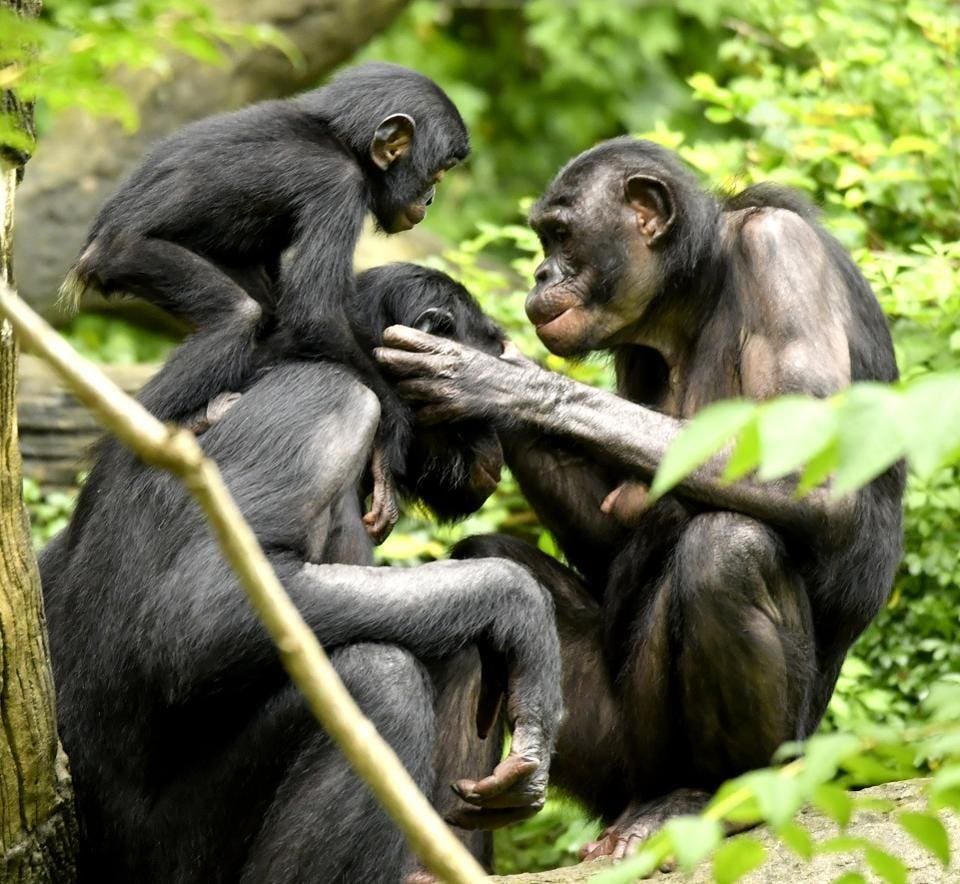 Bonobos, along with chimpanzees, are the two species most closely related to human beings that remain on Earth today. Bonobos are incredibly social, but still are not truly bipedal, as they maneuver on four limbs frequently. An evolutionary split that occurred approximately 5.6 million years ago marks the divergence of these creatures from modern humans. Getty Images

Just those last 4 hours before midnight on the cosmic calendar are filled with enormous and profound developments. At about 8:30 PM, the first truly bipedal ape, Ardipithecus, arose. An hour later, at 9:30 PM, the first Australipithecus evolved, marking the first appearance of the Hominina subtribe. At around 9:45 PM, we see the first evidence for stone tool use in human ancestors, a development that (in real-time) dates back to around 3.6 million years ago.

And then, at around 10:15-10:30 PM, and enormously critical step in our development occurred. Our hominid ancestors, facing food shortages, underwent two evolutionary paths: one branch developed stronger jaws, enabling them to crack previously uncrackable nuts, while the other developed larger brains and weaker jaws, providing a different path for food access. That latter path eventually led to the genus Homo, exemplified by the large-brained Homo habilis, while the strong-jawed branch quickly died out. 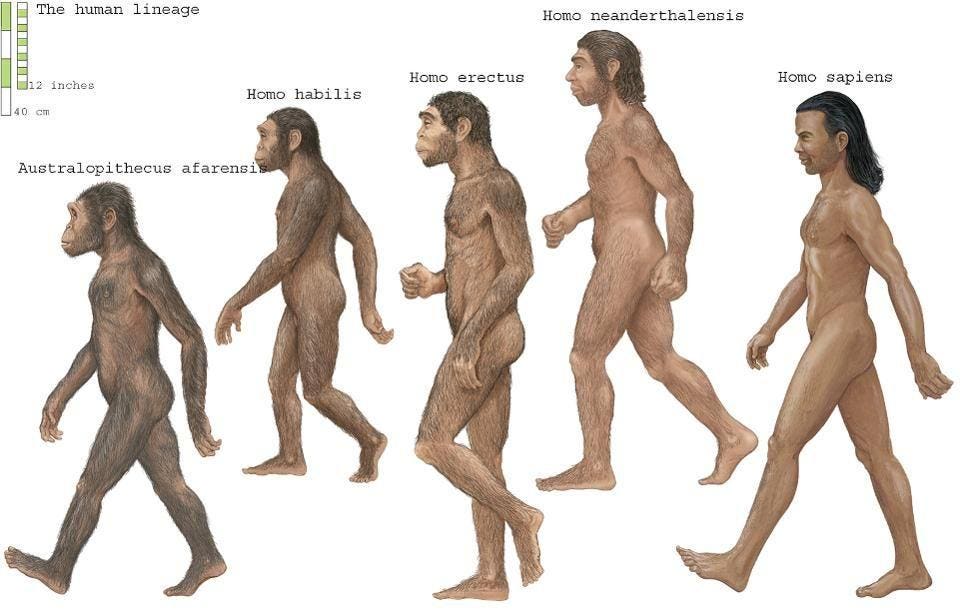 The group of hominids shown here includes many of our direct ancestors and evolutionary cousins. Shown here are Homo sapiens (modern humans), Australopithecus afarensis (thought to be the direct ancestor of the genus Homo), Homo erectus (which arose 1.9 million years ago and only died out ~140,000 years ago), Homo habilis (the first member of the genus Homo), and the Neanderthal (which arose later than, and independently of, modern humans). Encyclopaedia Britannica / UIG via Getty Images

By about 10:45 PM, Homo erectus had evolved, the largest-brained human ancestor so far and the first to both leave the African continent and display evidence of fire use. By 11:20 PM, Homo habilis and all of the Australopithecus species had become extinct.

But development still continued unabated, both evolutionarily and from a cultural/scientific perspective. At around 11:33 PM, the earliest evidence for cooking appears. At 11:36 PM, Homo heidelbergensis has evolved, thought by many to be an in-between link between modern humans and the older Homo erectus. And at 11:40 PM, the first evidence for clothing appears in the fossil record. It wasn't until approximately 11:48 PM on the cosmic calendar, or about 300,000 years ago in actual time, that anatomically modern humans, Homo sapiens, arose for the first time. 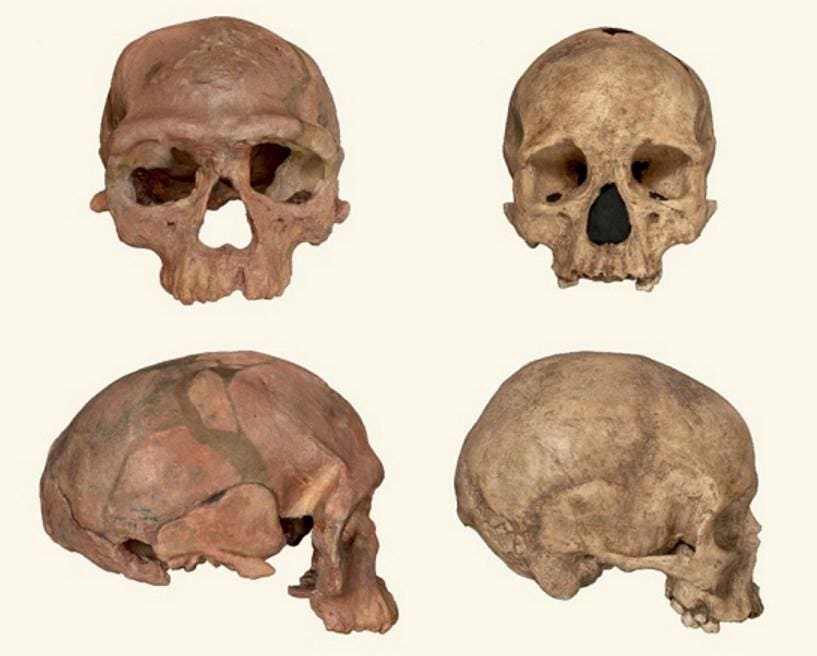 The oldest Homo sapiens fossils now date back to 300,000-315,000 years ago, and were found in Morocco. This find, dating back to only 2017, pushes back our species' origin earlier than the development of the neanderthals, and suggest that we didn't evolve only in East Africa, as previously believed. NHM London / Nature

What we consider the crowning achievements of civilization all only happened in the final minutes of the cosmic calendar.

Interspersed in that penultimate minute, at 11:58:43 PM, the last Neanderthal died out, leaving Chimpanzees and Bonobos as humanity's closest living relative. Only in this last minute of cosmic history, corresponding to the most recent 26,000 years, did what we now consider "modern human civilization" emerge. 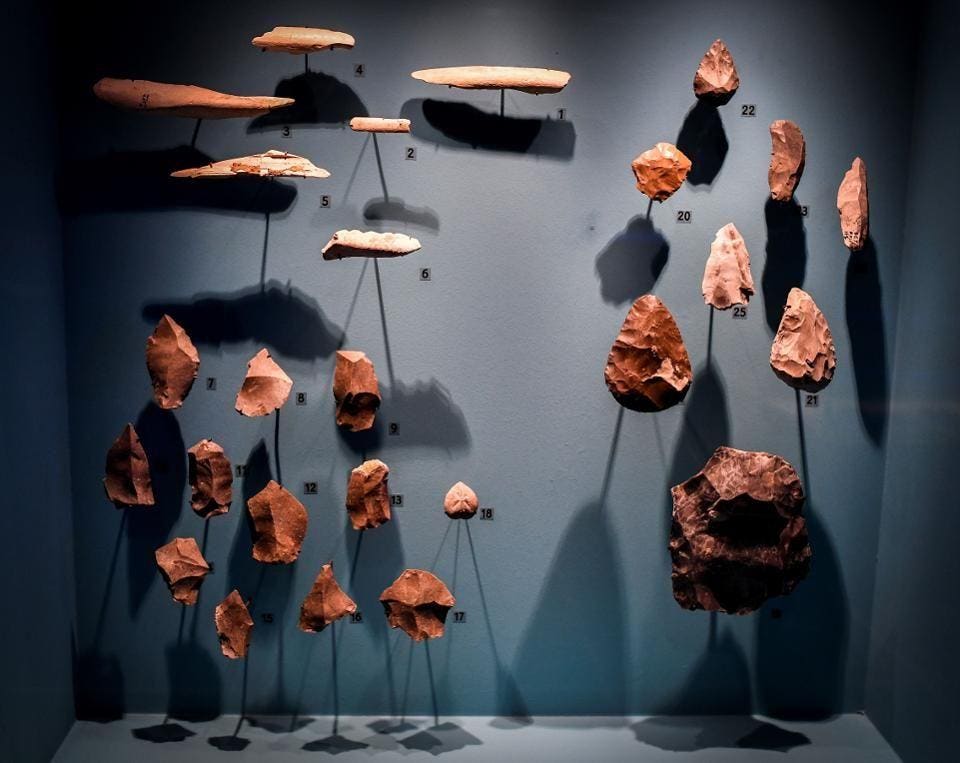 A picture taken on March 26, 2018 shows tools displayed for the Neanderthal exhibition at the Musee de l'Homme in Paris. Neanderthals and humans coexisted for thousands of years in Europe, but the extinction of the Neanderthals was swift and final in the aftermath of their encounters with human beings. STEPHANE DE SAKUTIN/AFP/Getty Images

This last minute of cosmic time sees the last glacial period ending, transforming the Earth to its modern global appearance. Humans spread to the Americas and Australia, while more large animals (like sheep, pigs, and goats) become domesticated as others (like the woolly mammoth) go extinct.

On the cosmic calendar, each second corresponds to 440 years. Even landing on the Moon occurred barely 0.1 seconds ago, from a cosmic perspective.

This cosmic timeline, assembled by E. Siegel in 2014, is slightly out-of-date in some regards but still provides an outstanding visualization of how insignificant humanity's contributions are on a cosmic scale. E. Siegel

All that human beings have ever accomplished occurs in a cosmic blink-of-an-eye. Our progress over the past few thousand years may have been rapid and incredible, and has brought us to a point where we now seek to extend our civilization beyond Earth. We have come so far in such a short time, cosmically speaking, but whether we'll endure remains to be seen.

If we truly want to make any significant dent into "year 2" of the cosmic calendar, we have our work cut out for us. The world is changing rapidly and, on many fronts, we continue to damage and poison the ecosystem that sustains us. If we don't begin taking a longer-term view of our civilization, we could be gone in mere cosmic seconds, just as all of recorded human history fits into mere seconds as well. As the 2010s give way to the 2020s, it's up to all of us to pilot our one-and-only habitable planet, Earth, in the right direction.

Ethan Siegel - I am a Ph.D. astrophysicist, author, and science communicator, who professes physics and astronomy at various colleges. I have won numerous awards for science writing since 2008 for my blog, Starts With A Bang, including the award for best science blog by the Institute of Physics. My two books, Treknology: The Science of Star Trek from Tricorders to Warp Drive, Beyond the Galaxy: How humanity looked beyond our Milky Way and discovered the entire Universe, are available for purchase at Amazon. Follow me on Twitter @startswithabang.

Starts With A Bang Contributor Group