EU should commit to net-zero greenhouse gas emissions by 2050 at the UN Conference, says Parliament.

Ahead of the UN COP25 Climate Change Conference in Madrid 2-13 December, the Parliament on Thursday approved a resolution declaring a climate and environmental emergency in Europe and globally. They also want the Commission to ensure that all relevant legislative and budgetary proposals are fully aligned with the objective of limiting global warming to under 1.5 °C.

“The European Parliament has just adopted an ambitious position in view of the upcoming COP 25 in Madrid. Given the climate and environmental emergency, it is essential to reduce our greenhouse gas emissions by 55% in 2030. It also sends a clear and timely message to the Commission a few weeks before the publication of the Communication on the Green Deal "”, said Pascal Canfin (RE, FR), Chair of the Committee on the Environment, Public Health and Food Safety, during the debate on Monday.

In a separate resolution, Parliament urges the EU to submit its strategy to reach climate neutrality as soon as possible, and by 2050 at the latest, to the UN Convention on Climate Change. MEPs also call on the new European Commission President Ursula von der Leyen to include a 55% reduction target of greenhouse gas emissions by 2030 in the European Green Deal.

Step up global emission reductions for aviation and shipping

MEPs say that current aviation and shipping ambitions fall short of the necessary emissions reductions. All countries should include emissions from international shipping and aviation in their national contributions plans (NDCs), they say, and urge the Commission to

propose that the maritime sector be included in the EU’s Emissions Trading System (ETS).

EU countries should at least double their contributions to the international Green Climate Fund, Parliament says. EU member states are the largest providers of public climate finance and the EU’s budget should fully comply with its international commitments. They also note that pledges by developed countries do not meet the collective goal of 100 billion USD per year as of 2020.

Finally, they urgently call on all EU countries to phase out all direct and indirect fossil fuel subsidies by 2020.

A number of countries, local administrations and scientists have declared that our planet is facing a climate emergency.

The European Commission has already proposed the goal of net-zero emissions by 2050, but the European Council has still not endorsed it as Poland, Hungary and Czechia are opposed.

Parliament at the COP25

The vote came as scientists warned that the world may have already crossed a series of climate tipping points, resulting in “a state of planetary emergency”.

Intended to demonstrate Europe’s green credentials days before a crucial UN climate conference in Madrid, the vote also ratchets up pressure on Ursula von der Leyen, the incoming president of the European commission, who declared this week that the EU would lead the fight against “the existential threat” of the climate crisis.

Although passed with a comfortable majority, with 429 votes in favour, 225 votes against and 19 abstentions – MEPs across the political spectrum warned against making symbolic gestures.

Environmental campaigners said the declaration was not backed by sufficient action. “Our house is on fire. The European parliament has seen the blaze, but it’s not enough to stand by and watch,” said Greenpeace’s EU climate policy adviser, Sebastian Mang, shortly before the vote.

In a separate vote on Thursday, MEPs backed a resolution stating that current EU climate targets were “not in line” with the 2015 Paris climate agreement, which calls for keeping global heating “well below” 2C above pre-industrial levels, but aiming to cap temperature rises at 1.5C. 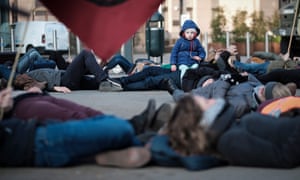 MEPs backed a tougher target of cutting greenhouse gas emissions by 55% by 2030, an improvement on the current 40% target, but derided by Green politicians and campaigners as inadequate.

Pascal Canfin, the French liberal MEP who drafted the climate emergency resolution, said: “The fact that Europe is the first continent to declare climate and environmental emergency, just before COP25, when the new commission takes office, and three weeks after Donald Trump confirmed the United States’ withdrawal from the Paris agreement, is a strong message sent to citizens and the rest of the world.”

MEPs from the European parliament’s largest group, the centre-right European People’s party, were split over the “climate emergency” language. The group had wanted to declare “a climate urgency” instead, because the German word emergency, der Notstand, left some MEPs uneasy, because of its associations with a Nazi-era law.

The EPP’s environmental spokesman, Peter Liese, said the climate emergency was “a fake debate” that hid the real decisions needed to reduce emissions. “There is an urgency to act, but no state of emergency to declare. Emergency can also be interpreted as undermining fundamental rights, like freedom of press and democracy.”

However, scores of EPP MEPs joined Liberals, Socialists, Greens and the radical left in voting through the climate emergency resolution.

The Eurosceptic European Conservatives and Reformists group opposed the text, although individual British Tories either supported or abstained from the vote. “Ramping up the rhetoric does not get us away from the serious discussions that now need to take place,” said its Czech environment spokesman, Alexandr Vondra.

The Brexit party voted against both climate resolutions.

Speaking to the Guardian before the vote, the Swedish meteorologist-turned Green MEP Pär Holmgren said other political groups hadn’t grasped the urgency of the climate crisis. “You could sum it up by saying: for the moment we are heading for 3C, which is of course better than 4C, but it’s far from well below 2C, aiming at 1.5 degrees which we have promised to each other, to future generations.”

Separately, the Climate Action Network, a coalition of 1,700 NGOS, warned that member states would have to overachieve on the EU’s existing 2030 carbon target to keep on track with the Paris climate agreement.

The EU currently aims to cut greenhouse gas emissions by 40% by 2030 against 1990 levels, a target the network has described as “shockingly insufficient”. To meet that target – declared inadequate by MEPs in the vote – EU member states have until the end of the year to submit plans to Brussels outlining their energy transformation over the next decade.

An assessment of the draft plans by the Climate Action Network said there was “insufficient ambition” to switch to renewables, make energy savings and phase out coal.

The report highlighted that progress had been made since countries submitted their original plans in 2018. Greece, Hungary and Slovakia have since agreed to phase out coal in their power sectors by 2030. That means coal will be concentrated in five EU member states in 2030: Bulgaria, the Czech Republic, Germany, Poland and Romania. 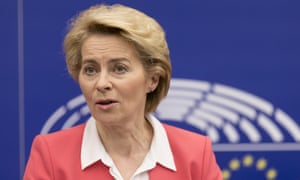 Ursula von der Leyen, the incoming president of the European commission, says the EU will lead the fight against “the existential threat” of the climate crisis. Photograph: Thierry Monasse/Getty Images

Other countries were faulted for low ambition, notably Belgium, which has not put forward any new plans on renewable energy or energy savings because of the long-running political stalemate that has resulted in a caretaker government for nearly a year. France, Germany, and Sweden were among numerous countries criticised for not doing enough to phase out fossil fuel subsidies.

The research highlighted that climate activists in Hungary and Romania had “no access to official information” about changes in government’s climate and energy plans.

“Member states have one month left to improve their plans,” Wendel Trio, the director of Climate Action Network Europe, said. “It is crystal clear that the quality of these plans will weigh a lot in the EU’s ability to act on climate change in the next decade. They must set clear pathways that will allow the bloc to increase its climate target, shift away from fossil fuels and speed up the pace towards fully energy efficient and renewables-based economies.”

The group did not assess the UK, which has submitted a draft national energy and climate plan to the European commission. The government has committed to net zero carbon emissions by 2050 and suggested that the UK could link to the EU’s emissions trading system, one of many politically-charged issues to be decided during the post-Brexit talks.