An estimated 14 elephant tusks worth US$140,000 were found in two suitcases belonging to Colonel Oscar Chapula, then military adviser to the commander of the Zambian army, as the commander’s entourage prepared to fly out on a seven-day working visit to China on May 29 2013.

Chapula was arrested, along with two unnamed Chinese embassy officials who reportedly claimed diplomatic immunity. They were released following interventions by authorities who included then defence minister Geoffrey Mwamba, army commander Brigadier General Paul Mihova, and the then Chinese ambassador to Zambia, Zhou Yuxiao, who deployed his military attaché to win back custody of the tusks, according to a report in the Zambian Watchdog.

“The latest [ivory] seizure and arrests at the Kenneth Kaunda International Airport involved some diplomats. We needed to get some clearance from the ministry of home affairs for police to conduct interviews so that they can establish who the owner of the tusks was and where those tusks were going,” the then Zambian minister of tourism and arts, Sylvia Masebo, said on June 12 2013 as she explained why the government had not opened an investigation into the incident.

That was the last official pronouncement on the case, and none of the Chinese embassy or Zambian army officials involved was ever prosecuted.

According to a Transparency International Government Defence Anti-Corruption Index report of February 2015, there is a “very high risk” of defence force corruption in Zambia.

The report probed for evidence of defence institutions having controlling or financial interests in businesses associated with natural resource exploitation, what the interests were, and whether they were publicly stated or subjected to scrutiny.

“Members of the Zambian army and police units, all suffering from income declines, possess the weapons and authority to support a great deal of illegal hunting activity,” it said. “A report by the Zambia Wildlife Conservation Society found well-documented incidents of army personnel setting up roadblocks at game park entrances. Army vehicles, laden with meat and tusks, would be seen driving away later.

“Even if not directly poaching, soldiers and police have regularly allowed other Zambians to rent, purchase, or borrow official weapons and ammunition.

“There are also allegations of Chinese diplomats involved in cartels with rogue military officials in Zambia in exporting ivory to China. There is no evidence to suggest that the interests of defence and security institutions involved in illegal hunting are publicly declared and subject to public and parliamentary scrutiny,” the anti-graft watchdog concluded.

On May 16 this year, the Zambian Department of National Parks and Wildlife announced that Zambian Air Force captain Mwiya Masheke and flight sergeant Mutemwa Chripine had been detained, together with Namibian national Nefuma Taleni Stefanus and Zambian businessman Martin Maimba, in connection with the illegal possession of rhino horns weighing 3.9kg.

The four were arrested by police acting on a tip-off while they were allegedly selling the ivory to the businessman at a shopping mall in Chawama township, Lusaka. They were remanded in custody after appearing in court on charges of violating the Zambia Wildlife Act. 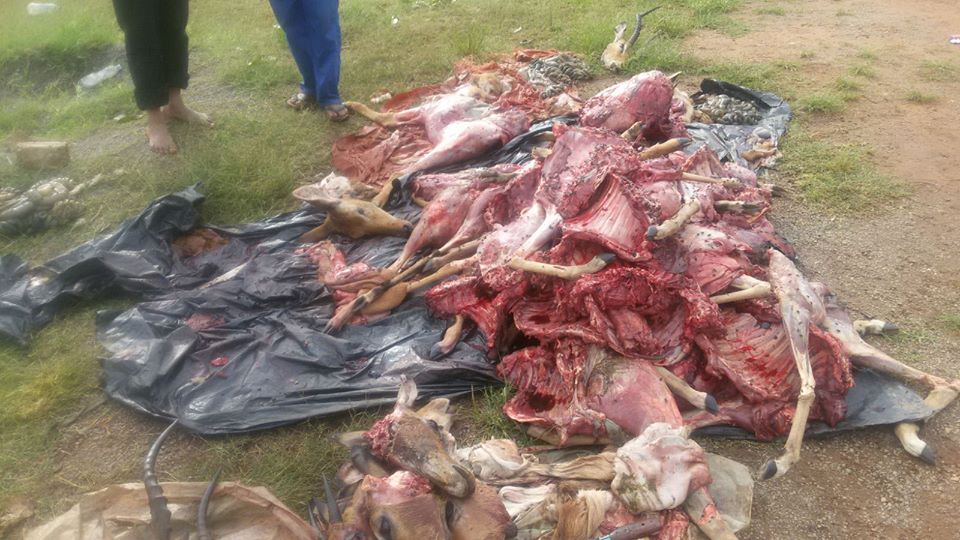 Ngoma pointed out that, despite some improvements in counter-poaching initiatives, Zambia is struggling to contain the internal poaching crisis which has led to the extinction of black rhinos over the past decades.

Asked to comment on whether the government had found evidence of Zambian army involvement in poaching, Ngoma said it would be unfair to label the army as an institutional driver of the poaching crisis, although some soldiers had been found to be involved in ivory poaching and trafficking.

“In Zambia we have poaching syndicates made up of locals, some of them in the army and yes, some Chinese as well as Zimbabwean, Malawian, Tanzanian, Namibian and Congolese [Democratic Republic of Congo] nationals,” he said.

“In cases where soldiers are arrested, they face the same criminal justice system as everybody else. We are not looking at apportioning blame, but rather we want to stop poaching regardless of whether the perpetrators are soldiers, civilians or foreigners.”

The army’s public relations officer, Lieutenant Colonel Luwespo Sinyinza, told Oxpeckers that, like in every other army in the world, there are rogue soldiers who commit crimes that include poaching while serving in the Zambian army. However, he said the activities of a few “rogues” should not be used to create the impression that the army as an institution is involved in poaching.

“The Zambian army, like all other professional institutions, has to deal with rogue soldiers who commit crimes from time to time. We always let the law deal with the criminals as individuals. We therefore do not understand why the media and other organisations should use isolated incidents to paint the army as a poaching institution,” Sinyinza said.

He declined to comment on whether there had been any follow-ups to the 2013 ivory seizure at Kenneth Kaunda International Airport involving Chapula and two Chinese embassy officers. Efforts to contact former defence minister Mwamba were unsuccessful.

Conservation bodies estimate Zambia has lost more than 144,000 elephants to poaching in the past 30 years. According to the International Union for the Conservation of Nature, the country’s elephant population has declined by 90%, from an estimated 160,000 in 1981 to just over 16,000 in 2015.

The black rhino population, estimated at 13,000 in 1981, has been depleted to extinction by poachers. Only a small population of white rhinos remains in national parks.

Zambian government attempts to contain the multiple drivers of the poaching crisis have failed since the extinction of the black rhino in 1984, said a report published by the American University (Washington DC) in February 2015.

“Faced with the extinction of the black rhino and the decimation of the elephant, the Zambian government initiated several wildlife conservation policies, including cross-border agreements with Zimbabwe and other countries where rhino and elephant poaching is common, aimed at reducing the amount of rhino and elephant poaching,” it said. “But these conservation efforts have had little long-term impacts as many Zambian poachers have crossed the border to neighbouring Zimbabwe to continue poaching.

“Other problems – such as a  weak economy, limited resources for wildlife preservation, competition with local farmers for land, the politics of wildlife legislation and a very lucrative global market in ivory – have made it very difficult for the Zambian government to protect its rhino and elephant populations.”

The current Tourism and Arts Minister, Jean Kapata, said the government was concerned about the emergence of poaching syndicates which have resorted to the use of poisons to kill elephants in large numbers.

“Of late, we are more concerned about the use of poisons to kill animals, especially elephants and hyenas, vultures and other collateral poaching targets. These poaching syndicates remain a threat to all the gains we have achieved working together over the last 30 years,” Kapata said at an event held on March 22 2016 to commemorate 30 years of working with the Frankfurt Zoological Society on elephant conservation initiatives through the North Luangwa (National Park) Conservation Programme.

Military relations between China and Zambia have blossomed, with the sale of aircraft, small arms and, more recently, patrol boats to equip the new Zambia Army Marine Commando force, which was set up to patrol the country’s lakes and rivers last August.

Three months after the May 2013 arrest of the Chinese diplomats and the seizure of the elephant tusks, Chinese ambassador Zhou Yuxiao announced the signing of a US$8-million agreement on the sale of military equipment to Zambia.

The deal also covered the secondment of 11 Chinese doctors to Zambian army hospitals as well as the rehabilitation of military hospitals in the towns of Ndola and Maina Soko.

In April 2014, the two countries capped their relationship with a Zambian air force order of six Chinese jets worth $100-million. The first aircraft was due to be delivered to Zambia within the first half of 2016.

Ambassador Zhou Yuxiao left Zambia in July 2014, and was replaced by the current ambassador, Yang Youming.

He did not respond to questions emailed to him by Oxpeckers, as advised by an embassy official. Oxpeckers was also unable to get a response from the Chinese chancellory, an annex of the embassy in Lusaka.