Rains bring some relief to surging deforestation in Brazil's Amazon

BRASILIA (Reuters) - The pace of surging deforestation in Brazil’s Amazon rainforest this year eased in October, government data showed on Friday, with the onset of the rainy season making the muddy forest tougher to penetrate and helping prevent fires.

Compared to October last year, deforestation for the month was up 5%, according to preliminary data from Brazil’s space research agency INPE.

This was a minor increase compared to the 83% rise for January to October over the same period last year. For the first 10 months, deforestation totaled 8,408 square kilometers (3,246 square miles), an area more than 10 times the size of New York City.

“We’ve had several good rains,” said Philip Fearnside, an ecologist at the National Institute of Amazonian Research in Manaus, the largest city in Brazil’s Amazon.

He emphasized that a 5% increase in October still represents a worsening from last year.

The Amazon is the world’s largest tropical rainforest, absorbing vast amounts of greenhouse gases that contribute to climate change.

Fires swept through the Amazon in August, with the number of hotspots on a year to date basis surging to the highest point since 2010, drawing global outcry from world leaders and the public. 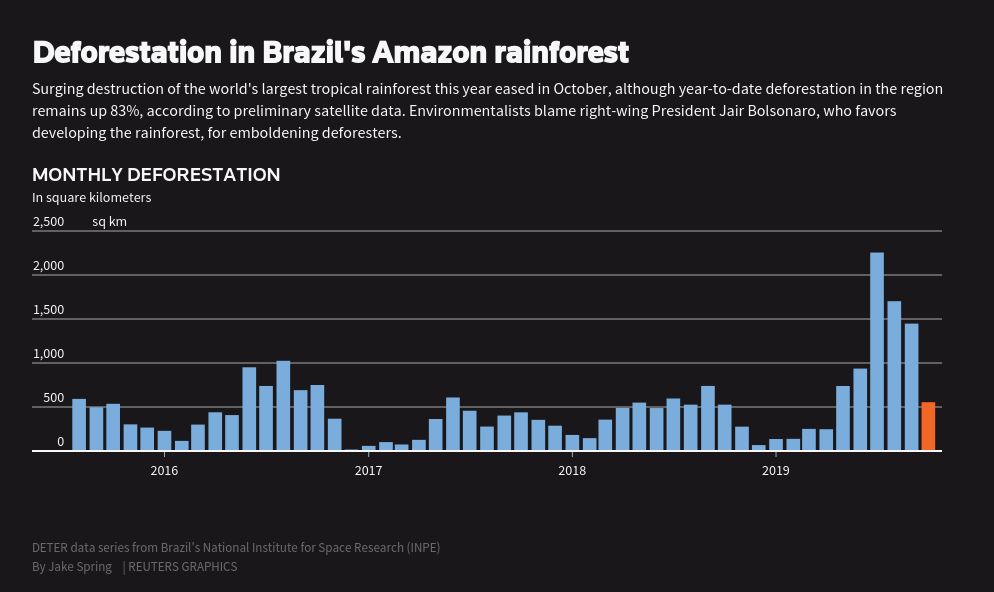 Environmentalists and scientists have blamed the destruction on President Jair Bolsonaro - for emboldening deforesters with strong rhetoric in favor of developing the Amazon and also for reining in the country’s environmental enforcement agency.

“There is no other explanation other than the government’s constant discourse plus the actual concrete actions in weakening environment,” Fearnside said.

Bolsonaro’s office declined to comment, while Brazil’s Environment Ministry did not immediately respond.

The fires fell substantially year-on-year in September and October, after Bolsonaro temporarily banned setting fires in the region and sent in the military to battle the blazes. Year-to-date, the number of fires recorded in the Amazon has dropped back to only the highest since 2017.

But fires continue to rage in neighboring biomes like the Pantanal wetlands, an area reknowned for its unique wildlife that draws tourists in search of jaguars and rare birds. Roughly 12% of the Pantanal has gone up in flames from January to October, the most since 2007, according to INPE.

Scientists worry that the Amazon may be being pushed toward a point of no return, after which it will dry out and degrade into a savannah.

Research from U.S. space agency NASA released this week showed the atmosphere above the Amazon has dried out over the past 20 years because of human activity including fires, deforestation, farming and ranching.

“The trees need to transpire to cool themselves and to add more water vapor into the atmosphere. But the soil doesn’t have extra water for the trees to pull in,” said Sassan Saatchi, a co-author of the study, in a written statement.

“If this continues, the forest may no longer be able to sustain itself.”

Bolsonaro suggested Lula - who was president from 2003 to 2010 - was a “scoundrel” and called for his followers to rally around the government’s right-wing agenda, saying they should not allow “the new phase of Brazil’s recovery” to be derailed.

“Lovers of freedom and good, we are the majority. Without a north star and a directive, even the best troops become a band shooting at all sides, including friends,” Bolsonaro wrote.

“Do not give ammunition to the scoundrel, who is momentarily free but full of guilt,” he added, not referring to Lula by name.

A judge ordered that Lula be freed on Friday, after the country’s top court issued a broader ruling ending the mandatory imprisonment of convicted criminals after they lose their first appeal. Lula had been imprisoned on a corruption conviction, bearing a nearly nine-year sentence.

Lula spent the night in the southern city of Curitiba, where he had been jailed but is expected to return to the Sao Paulo area on Saturday.

Exiting the prison to a cheering crowd of supporters in red for Lula’s Workers Party, he called for a rally on Saturday at the metalworkers union on the outskirts of Sao Paulo where he got his political start, pledging to follow that up with a national tour.

Lula, who exited the presidency with sky-high approval ratings, is ineligible to stand for office until 2025 under Brazil’s “Clean Record” law because of his conviction for taking bribes. But his release is expected to energize the left ahead of next year’s municipal elections.

Under a Supreme Court ruling on Thursday, Lula and other convicted criminals can only be jailed after they exhaust their appeals.

Lula was imprisoned in 2018 after being found guilty of taking bribes from construction firms in return for public contracts. He has maintained his innocence and said the case against him was politically motivated.

In his first speech to supporters outside his jail in Curitiba on Friday, Lula vowed to fight to establish his innocence, accusing “rotten” police, prosecutors and judges of “working to criminalize the left.”