Selected Brazilian president Jair Bolsonaro actually enjoys to be called 'Nero of Brazil' and was already for years called 'Captain Chainsaw' due to his psychopathic urge having the Amazon forest cut down for deeply corrupted 'development' scams and Indigenous cultures destroyed. Bolsonaro also has been implicated in the assassination of Rio de Janeiro city councillor Marielle Franco and her driver

A 50 kilometre-long (31 mile) wildfire is advancing across Brazil's Pantanal wetlands.

The governor's office in the state of Mato Grosso do Sul said the fire was "bigger than anything seen before" in the region.

At least 50,000 hectares of vegetation have already been destroyed.

The area, located in the southern part of the country, is one of the most biodiverse regions in the world and a popular tourist destination.

The fire began on 25 October and is said to be advancing rapidly due to the combination of high temperatures and high winds.

The governor's office said in a statement that the situation was "critical". It also warned that visibility in the area is poor.

The governor has announced a 30-day moratorium on using fire for land clearance.

Firefighters are also using planes to tackle the fire from above. 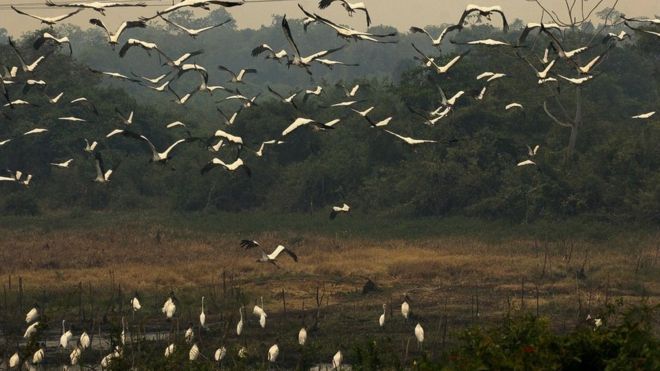 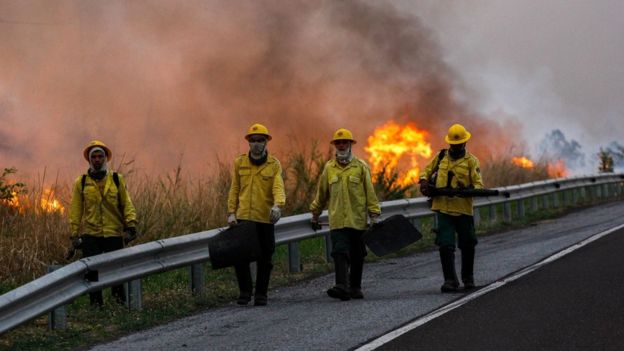 Over 8,000 fires have been recorded in the Pantanal until 30 October, up 462% on the same period last year.

Brazil has had a large number of forest fires this year. Official figures show more than 167,000 forest fires were recorded from January until 30 October this year.