UPDATE 27. Nov. 2019: Some sources speak of 23 others of 38 people already killed in the uprising and protests by brutal forces of the right-wing Piñera government.

- Madrid offers to take over the Cimate Summit

Chile has pulled out of hosting two major international summits, including a UN climate change conference, as anti-government protests continue.

President Sebastián Piñera said the decision had caused him "pain" but his government needed "to prioritise re-establishing public order".

The COP25 climate summit was scheduled for 2 to 13 December, while the Apec trade forum was next month.

The UN said it was now looking at alternative venues.

World leaders were to gather at this year's Conference of the Parties (COP) to discuss the implementation of the Paris Accord - a landmark international climate agreement, first signed at COP21 in December 2015.

This is the first time a country has pulled out of hosting the conference at such short notice.

The demonstrations were originally triggered by a now-suspended rise in the price of metro fares in Santiago.

However protesters are now marching to express their discontent over a wide variety of problems ranging from inequality to the high cost of healthcare.

The decision comes amid a number of global climate protests, including a week of strikes led by environmental activist Greta Thunberg last month.

And as the news was announced, a US-based organisation also separately revealed that tens of millions more people than previously thought were at risk of coastal flooding from climate-driven sea-level rise within the next century.

In a statement, the UN's climate change executive secretary, Patricia Espinosa, said: "Earlier today, I was informed of the decision by the government of Chile not to host COP25 in view of the difficult situation that the country is undergoing. We are currently exploring alternative hosting options."

This is a huge blow to hopes of progress on what many see as the crisis of climate change.

Just as the science becomes more robust about rising carbon levels driving up temperatures and triggering a range of dangerous impacts, diplomats and experts have been looking to the COP25 talks in December as a vital staging-post on the way to global action.

In particular, developing countries - the most vulnerable to the effects of rising sea levels and stronger storms - were banking on the event to raise their claims for more help from the richest nations.

But the longer the unrest has continued on the streets of Santiago, the more the government of Chile must have worried about coping. Already there were reports of delays in getting the massive conference venue ready for the tens of thousands of delegates and campaigners.

Now there'll be a frantic search for another venue, and soon.

What about the US and China?

It was also hoped the Asia Pacific Economic Co-operation (Apec) forum - due to be held in Santiago from 15 to 17 November - would help ease tensions between the US and China.

US officials said President Donald Trump had been planning to meet Chinese President Xi Jinping at Apec, to discuss a possible trade deal.

The two nations have been locked in an escalating trade war for some 18 months.

However, the White House confirmed that although a new location was yet to be found, the US still expected to sign an initial trade agreement with China next month.

"We look forward to finalising Phase One of the historic trade deal with China within the same time frame," the White House said in a statement.

What's going on in Chile?

At least 20 people have been killed since the mass protests in Chile began.

While many protests were peaceful, there were also deadly incidents of arson and looting, as well as violent clashes between the security forces and protesters.

They have shown little sign of abating despite Mr Piñera announcing measures to ease Chileans' discontent with high levels of inequality and other grievances. 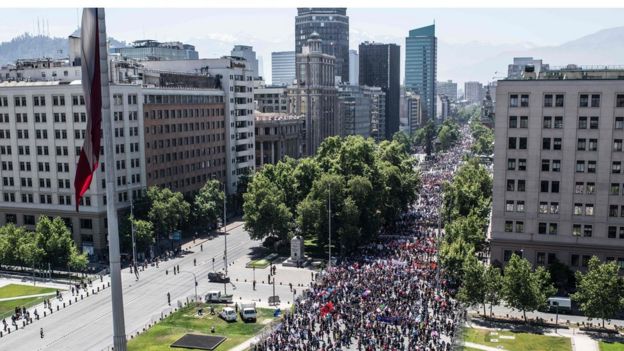 More than 7,000 people have been arrested and the response by Mr Piñera's government to the protests has come in for heavy criticism.

He declared a state of emergency and night-time curfews in many of Chile's major cities, but the measures only seemed to further incense protesters. 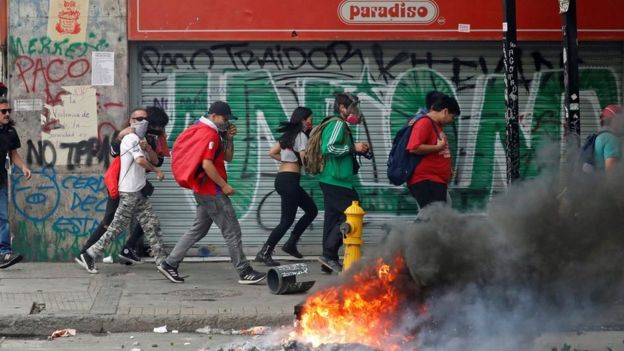 More than a million people are believed to have attended a rally in the capital last weekend. Image copyright Reuters

A rally on Saturday is estimated to have drawn more than a million people to the streets of Santiago, in what organisers said was the largest demonstration since democracy was restored in Chile in 1990.

Why was Chile hosting COP25?

COP25 was originally supposed to be hosted by Brazil.

But in November last year, just two months after being announced as the summit's host nation, then President-elect Jair Bolsonaro pulled out.

The far-right leader said this was due to the change of government and budget restrictions, according to local media. However, he had recently chosen a foreign minister who claimed "climate alarmism" was just a plot by "cultural Marxists".

A month later, Chile was selected to host the climate conference instead. Costa Rica, the other frontrunner, withdrew because of the costs involved in hosting.

Chile's police accused of deliberately shooting protesters in the face