Authorities in Queensland and New South Wales say there have been increased reports since September of sick and dead flying-foxes in an area stretching from northern NSW up to Gladstone in Queensland.

Many of the animals found on the ground have been highly emaciated and dehydrated.

Queensland’s Department of Environment and Science said flying foxes in trees had been exhibiting behaviours consistent with malnourishment, such as remaining in food trees instead of returning to their normal roost areas during the day.

The two main species affected are the grey-headed flying fox – a threatened species listed as vulnerable under Australian environment laws – and the black flying fox. 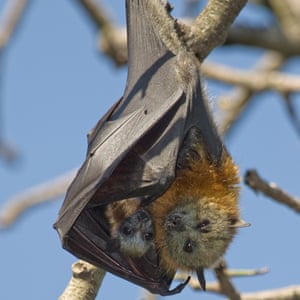 Grey-headed flying foxes are suffering from food shortages at a crucial stage of their breeding cycle, right when mothers have dependent pups on board. Photograph: Nick Edards

Carers and experts believe the cause is the prolonged dry conditions in eastern Australia, which has reduced the availability of food sources such as tree blossom.

Land clearing and development in flying-fox habitat also reduces the availability of food, but the pattern of prolonged warm and dry weather, as well as recent bushfires, has exacerbated the situation.

Tania Bishop, a wildlife veterinarian based in Queensland who has worked with flying foxes for 20 years, said the impact of dry winds and low humidity on the animals had led to what vets and carers were calling a “starvation event”.

“I haven’t ever seen the degree of emaciation and animals in as bad condition as I have this year,” Bishop said.

“The most shocking picture I’ve taken away from the last couple of weeks is a lot of animals that have come in looking like they’ve been mummified, that’s how dehydrated they were.”

Bishop said carers were taking in a disproportionate number of female flying foxes of breeding age during what would normally have been breeding season.

“They should be well and truly into their pregnancy by now and they’re either not pregnant or they come in so thin they ultimately lose their babies,” she said.

She said the baby animals that had been born were incredibly underweight.

“The very frightening thing about the grey-headed flying fox being affected is that their status is already threatened,” she said.

“The concern is what has this done to the already vulnerable status of the species?”

Evan Quartermain, the Australian head of programs for Humane Society International, said carers and vets working on the ground to assist the flying foxes would need support.

“With so many animals in need of care already and a high likelihood that heat-stress events will hit bats again this summer, it’s imperative that authorities roll out all the support they can for volunteer wildlife carers bearing the brunt of this crisis,” he said.

A spokesman for the Queensland Department of Environment and Science said the total impact on flying-fox populations was difficult to estimate accurately, but it was being closely monitored by the department, the CSIRO, local governments and wildlife carers.

He said the government strongly advised members of the public not to touch flying foxes, even if they appeared to be dead, as it was easy to be bitten or scratched when trying to help or move the animals.

“A small portion of flying-foxes carry a virus (the Australian bat lyssavirus) which can be transmitted to humans through contact with saliva … from the animals,” he said.

The spokesman said anyone who spots a sick or injured flying fox should call the RSPCA on 1300 ANIMAL (1300 264 625) to report it and a vaccinated carer will be contacted to rescue and care for the animal.

A spokeswoman for the NSW Department of Planning, Industry and Environment said there had been reports of animals roosting in residential areas rather than returning to their usual camps.

“Throughout October there have been reports of malnourished and dead flying foxes in south-eastern Queensland and northern NSW. This is occurring as a result of a food shortage, which is attributed to unfavourable weather conditions impacting the availability of nectar,” she said.