Nearly two million inhabitants were excluded from the National Register of Citizens of the state of Assam, in northeast India, on Saturday after more than a year of challenges in the process that seeks to identify the Indian citizens in the region and leave out illegal immigrants.

Out of the over four million citizens awaiting inclusion in the NRC, a total of 1,906,657 were left out of the final version of the list, NRC Assam coordinator Prateek Hajela said at a press conference.

Questions of identity and citizenship have long vexed a vast number of people living in Assam, one of India's most multi-ethnic states.

Among the residents are Bengali- and Assamese-speaking Hindus, and a medley of Indigenous peoples.

A third of its 32 million residents are Muslims, the second-highest number after Indian-administered Kashmir. Many of them are descendants of immigrants who settled under British rule.

But illegal migration from neighbouring Bangladesh has been a concern for decades now.

A six-year Indigenous protest - during which hundreds of people were murdered - led to a 1985 pact between the federal government and protesters. It was agreed that anyone who entered Assam without proper documentation after 24 March 1971 would be declared a foreigner.

Now, the publication of the controversial National Register of Citizens (NRC) reveals, according to officials, that some four million of Assam's residents are illegal foreigners.

Separate specially-formed courts in the last few years had already declared as foreigners some 1,000 residents - mostly Bengali-speaking Muslims - and interned them in half-a-dozen detention camps.

In an echo of US President Donald Trump's policy to separate undocumented parents and children, families have been similarly broken up in Assam.

The latest move to make millions of people stateless overnight has sparked fears of violence in what is already a tinderbox state.

Prime Minister Narendra Modi's Hindu nationalist Bharatiya Janata Party (BJP), which rules the state, has insisted in the past that illegal Muslim immigrants will be deported.

But neighbouring Bangladesh will definitely not accede to such a request.

Chances are India will end up creating the newest cohort of stateless people, raising the spectre of a homegrown crisis that will echo the Rohingya people who fled Myanmar for Bangladesh.

Stripped of their Indian citizenship, the affected people in Assam, many of whom have lived there for decades, will be suddenly unable to vote, access welfare or own property.

Those who already own property could easily become targets of envious neighbours. At a time when the UN refugee agency is vowing to end statelessness - there are some 10 million stateless people in the world - this will be a major embarrassment for India.

Mr Modi's government has already shown nervousness. A senior minister said people not listed on the NRC would not be kept in detention camps and would be given a last chance to prove their citizenship by the end of the year.

At the same time, there are plans to build a vast, new detention camp for people who are unable to prove their citizenship.

Also, according to lawyers, people whose names are not on the list can appeal to the special courts. It could take years, if not decades, to decide on the fate of tens of thousands of people.

"In short, this is a complete mess of affairs," says Subir Bhaumik, author of Troubled Periphery, a study of India's troubled north-east.

"The potential for chaos is huge. There will be panic among the minorities. Bangladesh will fear an influx of new refugees. Detention camps packed with stateless people will invite international attention, and bleed the exchequer."

There's little doubt that illegal migration is a serious issue for Assam.

Its population has grown at a much higher rate than in the rest of India, raising suspicions of substantial informal migration across the porous borders it shares with Bangladesh. Thousands fled to Assam during the 1971 war with Pakistan.

This has hurt the state in more ways than one: land ownership has declined, plot sizes have shrunk and landlessness has risen.

Estimates of illegal foreigners range from four million to 10 million. Most of them are engaged in farm work. According to one estimate, they have a sizeable presence in 15 of Assam's 33 districts. Some 100 special courts have already declared more than 85,000 people foreigners since 1985.

But many argue that Mr Modi's BJP has whipped up religious tension over the crisis for electoral gain - the party says illegal Muslims should be deported while illegal Hindus can remain.

"Rightly or wrongly the citizenship issue has become a crucial talking point and an issue in Assam politics. Unless it is settled, you cannot go forward," says Hiren Gohain, a leading Assamese author and social scientist.

"Who are the genuine citizens in the state and who are the aliens needs to be ascertained."

A hastily executed citizenship test which has cost India $180m (£137m) so far and has ended up fanning xenophobia and distrust surely cannot be the answer.

Why Is India Making Its Own People Stateless?

The Modi government will stop at nothing, it seems, to repress the country’s Muslims. 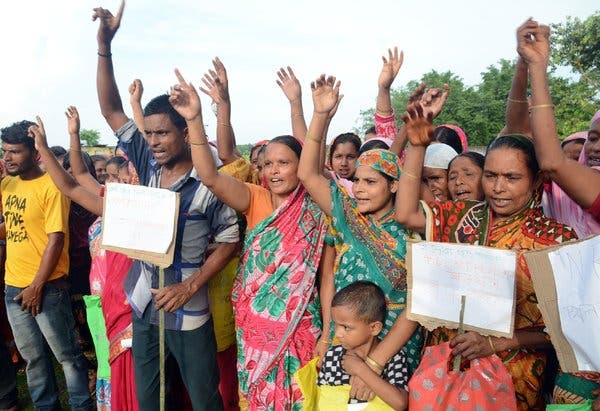 Protesters against the National Register of Citizens in the state of Assam, India, this month. CreditCreditStr/EPA, via Shutterstock

DHAKA, Bangladesh — More than 1.9 million people living in Assam, a state of about 33 million in northeastern India, effectively became stateless recently. Many have never lived anywhere but in India, and yet late last month, the government, claiming to crack down on illegal immigration, announced that it was removing them from the National Register of Citizens. Many of them are ethnic Bengalis, but there is no evidence that they are Bangladeshi.

The process by which the register has been compiled wasn’t just flawed; it was heavily politicized, as well as rife with prejudice. Since the overwhelming majority of the nearly two million people excluded from the registry are thought to be Muslim, the effort looks far more like an ethnic purge than anything like a census.

The Indian government hardly even pretends otherwise. Last fall, ahead of general elections earlier this year, the president of the ruling Bharatiya Janata Party (B.J.P.), Amit Shah, referred to immigrants as “infiltrators” and “termites,” and threatened to “throw them into the Bay of Bengal.” This July, Mr. Shah told Parliament, “Illegal immigrants living on every inch of this country will be deported according to the law.” A first step in implementing that plan is to leave Muslim Bengalis off the register in Assam and try to strip them of their citizenship.

Bengali settlers in Assam go back centuries, and the group was favored by the colonial British rulers. The relative advantage enjoyed by Bengali minorities was understandably resented by indigenous Assamese, but it took an increasingly ugly and nativist turn after the independence of Bangladesh in 1971. There were pogroms in the late 1970s and murderous riots in 1983.

The process of compiling the list of Assam’s citizens, which took several years and was finalized this summer, was plagued with major problems, some inevitable. Officials faced the impossible task of having to ask for and verify documents from before 1971, including for periods when official records were kept shoddily or incompletely. A retired officer of the Indian Air Force found himself excluded from the registry; so did relatives of Fakhruddin Ali Ahmed, a former president of India.

Far worse, however, are the obvious political motivations that drove the effort, and the likely consequences of denying citizenship to so many.

The National Register of Citizens predates the B.J.P.’s coming to power; it was created in 1951. The pledge to update the tally of Assam’s citizens — and expel any foreigners — was the product of a peace deal between the central government and anti-immigrant Assamese protesters in 1985. But successive governments ignored it, perhaps fearing a fallout. Assamese activists pushed on, however, and in 2013 secured a Supreme Court decision calling for the process to be completed. The B.J.P., which won the national general election in 2014 and control of the provincial government in Assam in 2016, took up the task in earnest.

Hindu nationalists have claimed for decades that vast numbers of Bangladeshis have been infiltrating India, and through mere repetition that rallying cry seems to have gained traction with the general population.

Several Bangladeshi government officials, for their part, claim that not one Bangladeshi citizen has entered India illegally since 1971.

Both positions are hard to defend. Plenty of scholarly works, news reports and anecdotal accounts suggest that if anything, there has been a steady trickle of Hindus, not Muslims, moving from Bangladesh to India — a kind of migration that Hindu nationalists usually welcome.

Few Bangladeshi Muslims go to India looking for better economic opportunities, it turns out; India is only marginally more developed than Bangladesh — if even that. Today, Bangladesh outstrips India in rankings for indicators of social development, such as literacy rates, gender parity and life expectancy.

The real problem isn’t that vast numbers of illegal migrants from Bangladesh are coming into India via Assam; it’s the convergence between Assamese nativism against Bengalis and the B.J.P.’s Hindu-nationalist agenda against Muslims.

The register, presented as the beginning of a solution to the problem of illegal immigration, is more likely to create further ethnic division and strife, especially if other states follow Assam’s example.

Officials in neighboring Meghalaya, as well as political leaders in Telangana and Bihar, have also asked that citizens be registered in those states. The B.J.P.’s general secretary, Kailash Vijayvargiya, has called for the exercise to be carried out nationwide to “prevent nefarious designs of illegal immigrants, who pose a threat to India’s internal security.”

But a far greater threat to India’s — and South Asia’s — security is precisely moves such as these, which pave the way for ethnic minorities to become stateless.

And where, exactly, should the nearly two million Bengalis who didn’t make it on Assam’s official registry be moved to? India is planning to build huge detention camps to house thousands of them. An Assamese minister has suggested sending “illegal Bangladeshis residing in Assam” to Bangladesh.

So far, the Bangladeshi government has responded with measured calm, but what India does next could jeopardize what has been, to date, one of the most stable partnerships in the region.

The risks are real. Bangladesh and India have been committed allies in the fight against violent radicalism, for example, and the Islamic State has become active in Sri Lanka and elsewhere in South Asia. Government measures that can be construed as targeting, even persecuting, Muslims only provide fodder for jihadist propaganda.

Yet the government of Prime Minister Narendra Modi will stop at nothing, it seems, to target and repress India’s Muslims. It recently locked down the entire state of Kashmir. It has fomented mob violence throughout the country. And now, in Assam, it is trying to strip Muslims of their citizenship. Military force, popular animus, administrative fiat — no measure is too big or too small when it comes to enacting the B.J.P.’s dangerous prejudices.

(*) Mr. K. Anis Ahmed is publisher of the Dhaka Tribune.