Overfishing: Biggest Threat to the Oceans

If the ocean was an economy, it would be the seventh largest in the world.

But instead of fostering it as a resource, humans are jeopardising its future – using it as a garbage dump and fishing it dry.

Broadcaster and naturalist Sir David Attenborough has warned our waters are facing the biggest threat in their history, with industrial overfishing putting the entire ecosystem at risk. Seafood is a key source of protein for people around the world, but nearly 90% of the world’s marine fish stocks are now fully exploited, overexploited or depleted, according to Friends of Ocean Action, a group of more than 50 global leaders, convened by the World Economic Forum and World Resources Institute.

The impact of overfishing is wide-ranging. It’s a cause of degraded ecosystems, according to the WWF, and affects the size of the fish left behind, as well as how they reproduce and the speed at which they mature. When too many fish are removed from one particular spot, the resulting imbalances can kill off other marine life, including sea turtles and corals.

There’s also an economic aspect, with many businesses and jobs reliant on the fish industry. When fish are under threat, the coastal economies that depend on them are also put at risk. 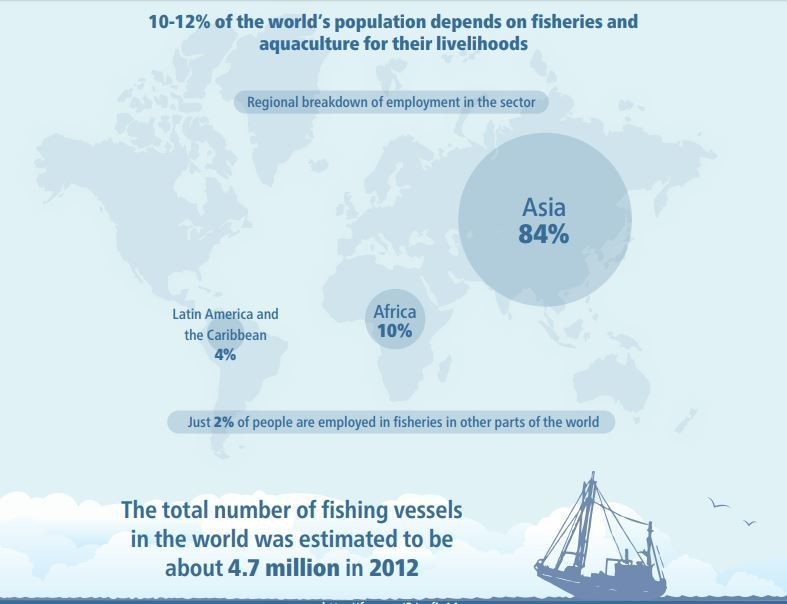 Adding another layer of complexity are the illegal and unregulated practices that are difficult to track. One in three fish captured never makes it to the plate, according to Friends of Ocean Action, and it’s tricky for consumers to know whether the fish they’re eating have been caught legally.

The good news is that the plight of the ocean is rising up the international policy agenda.

What's the World Economic Forum doing about the oceans?

Our oceans cover 70% of the world’s surface and account for 80% of the planet’s biodiversity. We can't have a healthy future without healthy oceans - but they're more vulnerable than ever because of climate change and pollution.

Tackling the grave threats to our oceans means working with leaders across sectors, from business to government to academia.

The World Economic Forum, in collaboration with the World Resources Institute, convenes the Friends of Ocean Action, a coalition of leaders working together to protect the seas. From a programme with the Indonesian government to cut plastic waste entering the sea to a global plan to track illegal fishing, the Friends are pushing for new solutions.

Climate change is an inextricable part of the threat to our oceans, with rising temperatures and acidification disrupting fragile ecosystems. The Forum runs a number of initiatives to support the shift to a low-carbon economy, including hosting the Alliance of CEO Climate Leaders, who have cut emissions in their companies by 9%.

Sweden is the worst offender for overfishing in the northeast Atlantic, according to a report from the New Economics Foundation that ranked countries exceeding the total allowable catch (TAC) for commercial fish stocks. In 2019, Sweden exceeded its TAC by more than 50%. The UK and Ireland were second and third. 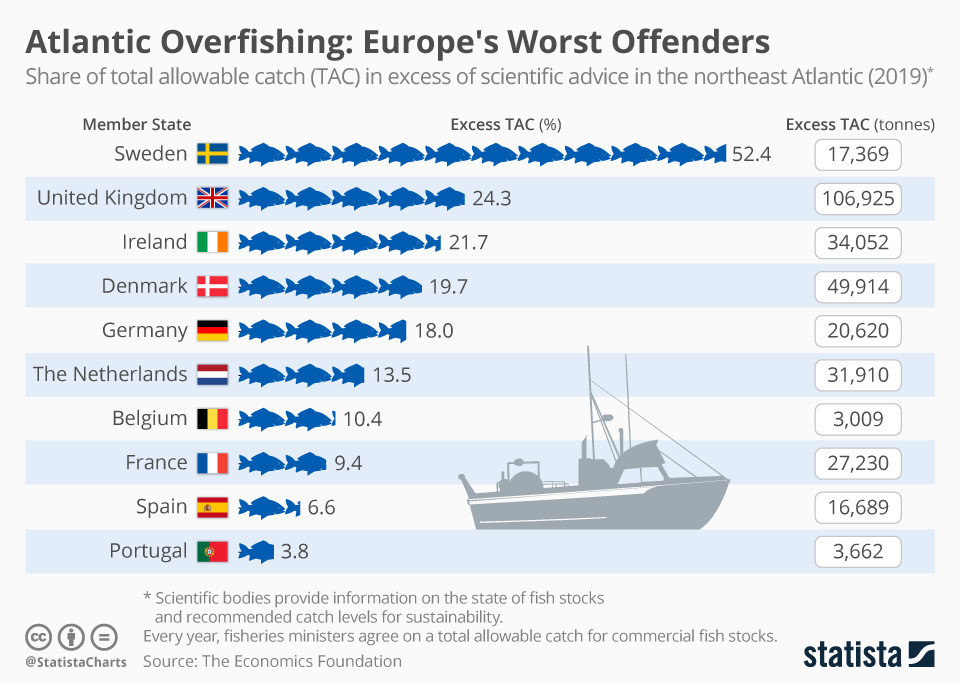 Overfishing is a grave threat to our ocean.
Image: Statista

Technology could help in this area, enabling better monitoring and measurement. Data scientists from the National Geographic Pristine Seas project have used satellites to track marine vessels from space, following industrial fishing vessels. They found more than 55% of ocean surface is exploited for industrial fishing, more than four times the land area covered by agriculture.

In less than a year, world leaders will meet at the UN Ocean Conference with the aim of agreeing how to scale up ocean action. Plastic, overfishing and toxicity - just some of the threats to our waters - means they’ll have a packed agenda.

The views expressed in this article are those of the author alone and not the World Economic Forum.

Is your organisation interested in working with the World Economic Forum? Find out more here.