These developments, reported by the organizations themselves, reflect the extent to which the country’s environmental policies and law enforcement agencies are being dismantled by the government of President Jair Bolsonaro.

Fines for illegal deforestation were down 34 percent from Jan. 1 to May 15 this year, compared to the same period last year, according to the O Estado de S. Paulo newspaper. This is the largest percentage drop ever recorded in Brazil. In absolute terms, it marks the smallest number of fines ever (850), compared to 1,290 imposed over the same period in 2018.

The last year in which a comparable number of fines (952) were imposed during the same period was 2012 — but this was at a time when real advances were being made in the fight against illegal deforestation. Indeed, 2012 was the year with the lowest level of deforestation in the Brazil Amazon since records began. 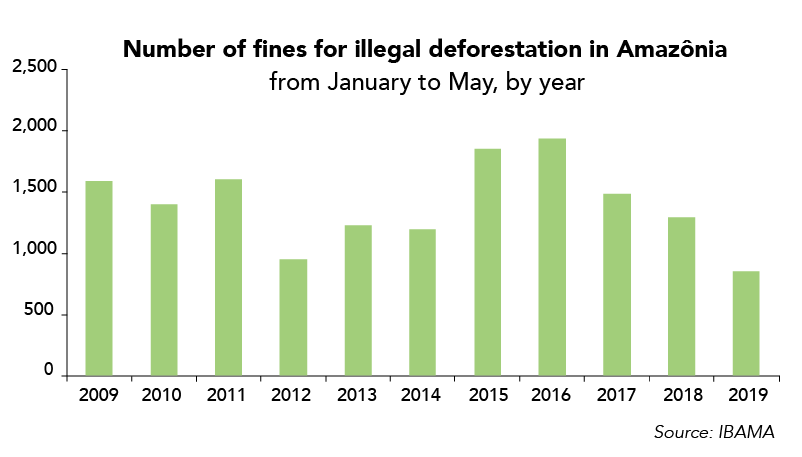 The number of fines imposed by IBAMA in the first five months of the year has fallen heavily since 2016.

This is far from being the case today. Recent figures on illegal deforestation, published by the National Institute of Spatial Research (INPE) and confirmed by the federal government, show that the Amazon region recorded the highest level ever of illegal deforestation for a single month in May 2019: 739 square kilometers (285 square miles), an area nearly as large as New York City. This is a 34 percent increase on the area cleared in May 2018, which was 550 square kilometers (212 square miles). It seems likely that the rise stems from government policies favorable to deforestation.

This confirms what an unnamed IBAMA official told Mongabay before the recent INPE figures were published: “It’s very difficult to believe that the decline in fines reflects a decline in illegal deforestation.” Agency employees spoke to Mongabay on background, citing fear of reprisals from the Bolsonaro administration. IBAMA’s press office told Mongabay that its request for an on-the-record interview should be sent to the Ministry of the Environment, but the ministry did not respond, despite multiple Mongabay requests.

Government seizures of illegally harvested timber fell even more dramatically than the number of fines: just 40 cubic meters (1,410 cubic feet), equivalent to 10 large trees, were confiscated in the first four months of the year under Bolsonaro. By contrast, 25,000 cubic meters (883,000 cubic feet) of illegal timber were seized in 2018 under the Michel Temer administration.

It seems unlikely the volume of seizures will increase by much in the near future: all six monitoring operations planned for coming months have either been cancelled or downsized.

And those that do go ahead are likely to yield few results: IBAMA’s website must now announce in advance when and where each operation will take place, even though it’s obvious that the success of the raids depends on secrecy and the element of surprise. This advance publicity also increases the risks to IBAMA agents, leaving them more vulnerable to criminal attacks. 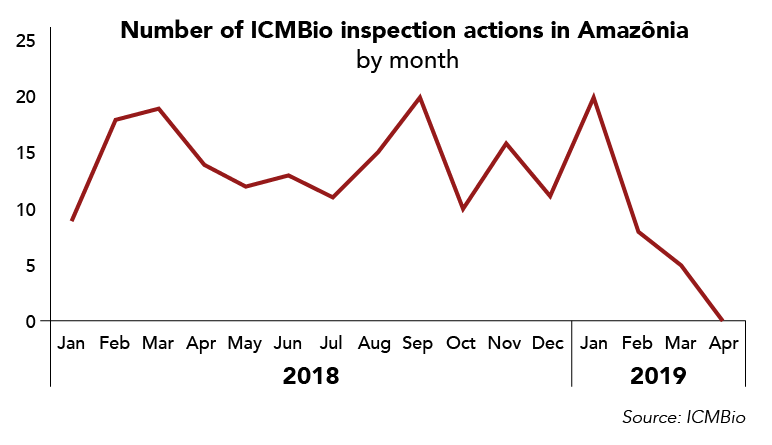 The number of ICMBio operations has declined heavily this year. seizures of illegally harvested timber fell even more precipitou

According to experts, the disarray at IBAMA is largely due to the firing of the heads of the agency’s state bodies, which carry out most of the deforestation-monitoring operations. In February, Environment Minister Ricardo Salles axed 21 of the 27 state superintendents in a single day. To date, only four of the state bodies have official heads. Without leadership, there is no proper planning for operations to curb illegal deforestation.

It’s these state superintendents who have the authority to make decisions regarding the charging of smaller fines, those up to 500,000 reais ($129,000), which constitute the majority of fines. “The employees who occupy the top posts temporarily do not feel they have the authority to take such decisions,” said another IBAMA employee.

Morale is also very low at the environmental agency, with both Salles and Bolsonaro repeatedly attacking IBAMA. One incident that greatly affected employees was Bolsonaro’s surprise announcement that IBAMA agents could no longer set fire to tractors and other equipment used by illegal loggers. This legally approved policy had long been an effective deterrent for IBAMA agents to combat criminal deforestation in remote areas where it’s both difficult and expensive to confiscate illicit equipment.

In a short video interview, Bolsonaro, standing beside Marcos Rogério, a right-wing senator from Rondônia state, banned operations to end the illegal extraction of timber from Jamari National Forest, a protected area in Rondônia that is being extensively invaded by illegal loggers and land grabbers. That presidential statement was enough to not only stop all government monitoring operations in the forest, but also make IBAMA officials fear potential assaults if they set foot in the protected area, an official said.

“If before the video, staff were already being attacked by loggers, imagine what it is like with the president’s endorsement of the criminals,” an IBAMA employee said. In practice, the government’s new policies have forced a host of highly skilled environmental officials to be paid to sit idle and not uphold the nation’s deforestation laws.

At ICMBio, the situation is similar. O Estado de S. Paulo reported that 350 fines, imposed by ICMBio officials, are awaiting confirmation from the institute’s president before they can be enforced. In other words, bureaucratic bottlenecks are holding up the process. The total value of uncharged fines is 146 million reais ($37.6 million). The Environment Ministry did not respond when asked by Mongabay for its response.

At the same time, just as in IBAMA, important bodies within ICMBio remain leaderless. There are no directors at 47 of Brazil’s 334 conservation units, which means there is no top-level management at conservation units covering 161,000 square kilometers (62,200 square miles), an area larger than England.

When an employee is removed from a management position, they remain a civil servant with a salary; they merely lose the right to extra payment for special duties. Under Brazilian law, employees appointed to their jobs in a public concurso (a lengthy selection process open to all) can only be fired as the result of a disciplinary process.

However, some IBAMA employees say they believe the system may change under Bolsonaro. “I have found out that the ministry has decided to begin disciplinary procedures against employees involved in monitoring operations on indigenous land and in protected areas,” one official said. “How can you continue to work in such conditions?”

Trade unions, representing Ministry of Environment employees, accuse the ministry of firing four employees this year without following proper procedures. Only one of those four had been accused of unacceptable behavior that could merit dismissal, but Salles decided to fire the other three as well. This was seen by many analysts as a sign of what lies ahead. “It’s part of process of intimidation, of putting fear into people,” said Beth Uema, director of the National Association of Environmental Employees.

Speaking to a gathering of landowners at the end of April, Bolsonaro said he had directed Salles “to clean out” ICMBio and IBAMA. He also told the audience that he had instructed the minister to order employees to stop fining those committing environmental crimes, and rather merely inform lawbreakers about environmental regulations. Employees say the new policy is already being rigorously adhered to. 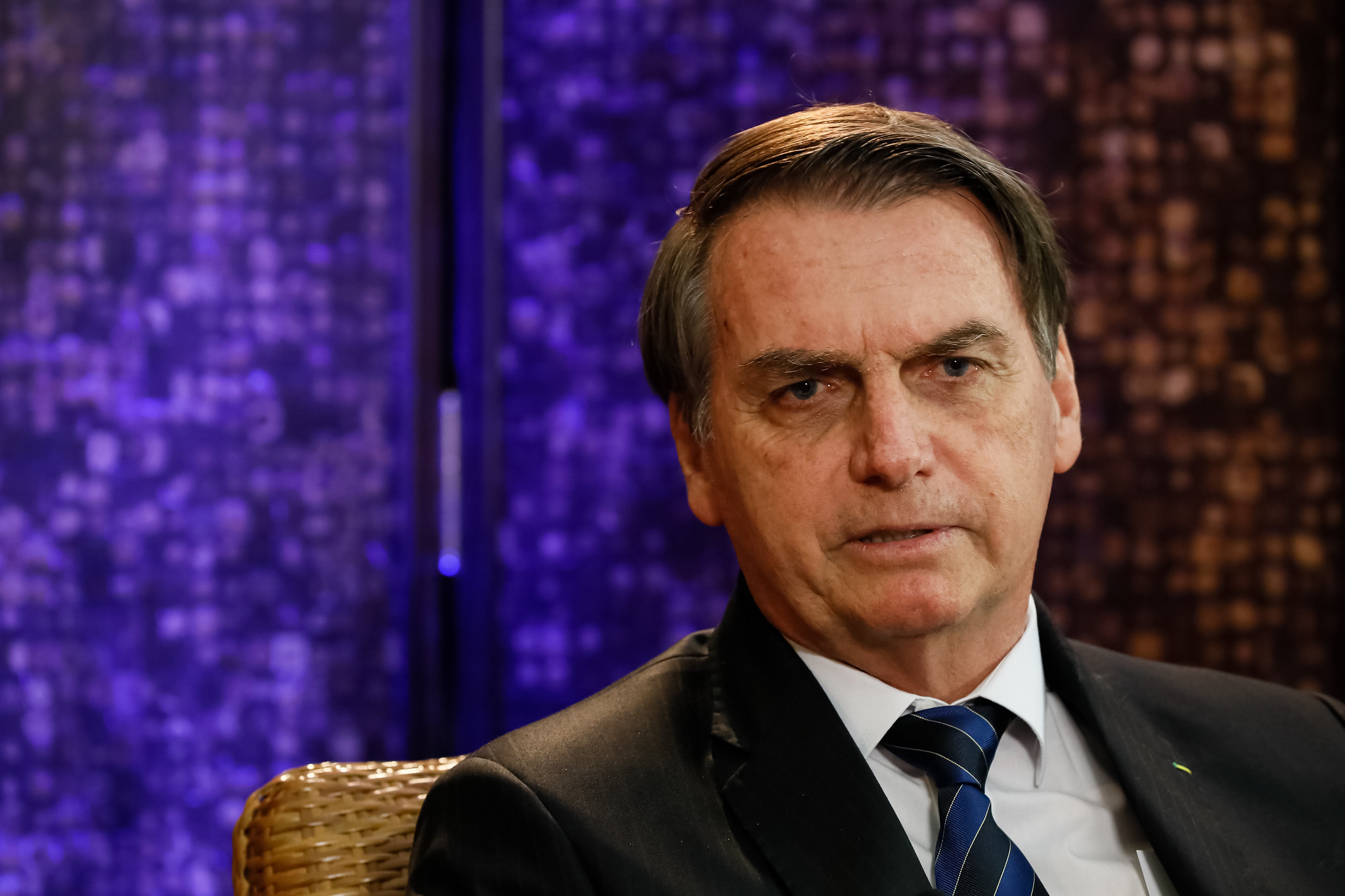 In President Jair Bolsonaro’s first 100 days, his administration weakened environmental protections and institutions, while the Amazon saw an uptick in violence against indigenous groups and traditional communities. Photo credit: Palácio do Planalto / CC BY 2.0

Bolsonaro conduct may be investigated

Lucas Furtado, the deputy attorney general for public prosecution at the Federal Court of Accounts (TCU), the government’s accountability office, has asked the TCU to open an investigation into whether the administration’s management of the country’s environmental policy is jeopardizing the monitoring and control of illegal deforestation.

The request resulted from a visit to the Attorney General’s Office on May 15 by representatives of 50 NGOs, led by the Brazilian Institute of Environmental Protection (PROAM). According to the Furtado, the NGOs delivered a document that details a series of Bolsonaro government initiatives aimed at “destroying the current environmental policy.” The administration initiatives range from the overriding of technical advice, to the hounding of civil servants “with the clear objective of changing procedures.”

Furtado says it is the TCU’s obligation to examine the NGOs’ accusations, as it is the federal body responsible for the review of public expenditures, including spending by the government on the management of environmental agencies. If the accusation about the dismantling of these agencies is substantiated, the administration would be guilty of the misuse of resources to actively work against the nation’s environmental laws.

Furtado cited the Bolsonaro administration’s actions regarding the Amazon Fund as a particular potential example of resource misuse. The Amazon Fund was founded in 2008 and created an effective international partnership with developed world nations, particularly Norway and Germany, who agreed to fund efforts to prevent, monitor and combat deforestation, and to promote preservation and sustainability in the Brazilian Amazon.

However, economic support from those donors (roughly $87 million annually), and the Amazon Fund itself, could come to an end soon if Environmental Minister Salles does as he has said he will, and decides without consulting the major foreign donors to dramatically overhaul the fund’s rules.

Among those unilateral rule changes would be a move by Brazil to curtail the role of NGOs in implementing deforestation programs. The Bolsonaro government also recently announced its intention to use some Amazon Fund resources to pay for the forcible purchase of land, for instance when the government wants to pay compensation to property owners with land within protected areas. The issue is often complex, as some of the land was occupied after the creation of the protected area was announced, and the use of the resources in this way has not been approved by international donors Norway and Germany.

In his request for an investigation, which has not yet been authorized by the TCU ministers, Furtado has asked the Federal Court of Accounts to look into allegations, made by Salles, that his ministry has found irregularities and inconsistencies in past grants made by the Amazon Fund. Salles has claimed publicly that NGOs, whose deforestation-monitoring and sustainability projects are supported by the Amazon Fund, failed to account for more than $1.2 billion in spending.

Furtado said an audit carried out previously by the TCU itself determined that, in general, the resources of the Amazon Fund were being used properly. He says Salles’s claim that the funds are being misused “may compromise the arrival of more funds, which may make it more difficult to protect the Amazon forest.”

As the administration pushes ahead rapidly to dismantle the country’s environmental agencies, policies and funding, there is growing consternation in Brazil and abroad. It seems likely that opposition will grow even further when the far-reaching consequences of Bolsonaro’s aggressive policies become apparent in the Amazon rainforest, and with indigenous and traditional rural populations.

Banner image of an IBAMA operation against illegal loggers in the Brazilian Amazon, courtesy of IBAMA.