Trump is a Threat to Nature and Natives in Alaska

Alaska – Trump Administration officials have fast-tracked permits for the largest open-pit mine in North America. The proposed Pebble Mine had previously seemed paralyzed, after more than a decade of relentless opposition by Alaska Native elders and youth. Now, plans for the mine are being rushed forward. The final public comment period for the proposed U.S. Army Corps of Engineers (USACE) permits ends on June 29, 2019.

Under the Obama administration, the Environmental Protection Agency (EPA) wrote that it would result in a “complete loss of fish habitat” (PDF) in a proposed determination to block Pebble Mine. The mine is planned to excavate ore amid the headwaters of the streams that spawn the world’s biggest sockeye salmon populations, in Alaska’s Bristol Bay region. This single mine is slated to disfigure an area larger than Manhattan.

Over thirty Alaskan Native village communities, living off of the road system, rely on the wild salmon threatened by the mine. Between 60 and 80 percent of residents’ subsistence diets and over 75% of local jobs in the hub community of Dillingham rely on local salmon.

“Taking our salmon away would be like what happened to the ‘lower 48 Indians’ when they took the buffalo away. They just couldn’t survive without that buffalo. We can’t survive without our fish here. We are the highest consumers of fish per capita in the United States.” – First Chief of the Curyung 'Tribal' Council, Tom Tilden

The proposed Pebble Mine was designed around excavating an open pit two miles long and three miles wide, and at least a quarter of a mile deep. It would endanger an average of 37.5 million sockeye salmon returning annually. The threatened salmon provide over 14,000 jobs in commercial fishing, which generate about $480 million annually, according to the EPA’s 2014 Bristol Bay Watershed Assessment. 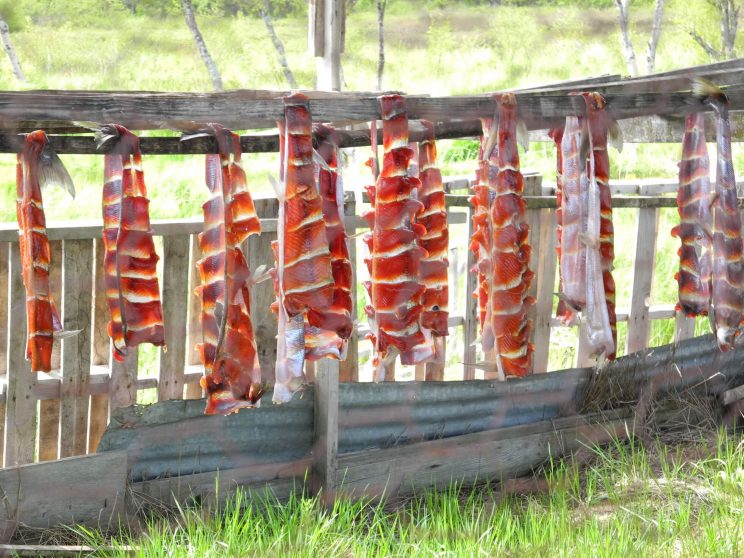 The film We Can’t Eat Gold, which focuses on the struggle against the mine, has been updated and re-released to cover the Trump Administration’s recent dash to permit the proposed Pebble Mine. (Disclosure: contributing author Josh Tucker directed this film.) You can watch it for free below.

Tilden and other members of indigenous traditional councils and allies spoke out at annual shareholder meetings, pressuring a succession of four major mining companies to pull out of the proposed Pebble Mine: Mitsubishi in 2011, Anglo American in 2013, Rio Tinto in 2014, and First Quantum Minerals, as well as BlackRock, the worlds largest investment firm, in 2018.

In spite of these setbacks, the Pebble Partnership continues to seek permits and investors to excavate what it claims are five hundred billion dollars worth of gold, copper and other minerals. According to SEC filings, the company has offered a bonus of between $7.5 million and $12.5 million to its CEO, veteran D.C. lobbyist Tom Collier, should the mine get permitted.

President Trump’s first EPA Administrator, Scott Pruitt, met with Collier and others in his first days in office. Since then, the permit applications for the proposed mine have been rocketing through USACE channels at a record pace.

Pruitt wrote a memo (PDF) to EPA staff ordering draft regulatory changes to be submitted to the White House Office of Management and Budget (OMB), which would retroactively strip the EPA of the authority under which it issued the proposed determination to preemptively block the proposed Pebble Mine in 2014.

Current EPA Administrator Andrew Wheeler has recused himself from decisions regarding the proposed Pebble Mine, since his former law firm, Faegre Baker Daniels LLP, worked for the Pebble Partnership including arranging meetings between Pruitt and Collier.

The Draft Environmental Impact Statement (DEIS) is a key permitting and political vehicle for starting construction on Pebble Mine. Many Alaska Natives and their allies who are opposing the proposed Pebble Mine raise critical objections to the DEIS, which is the subject of the current and final USACE public comment period. 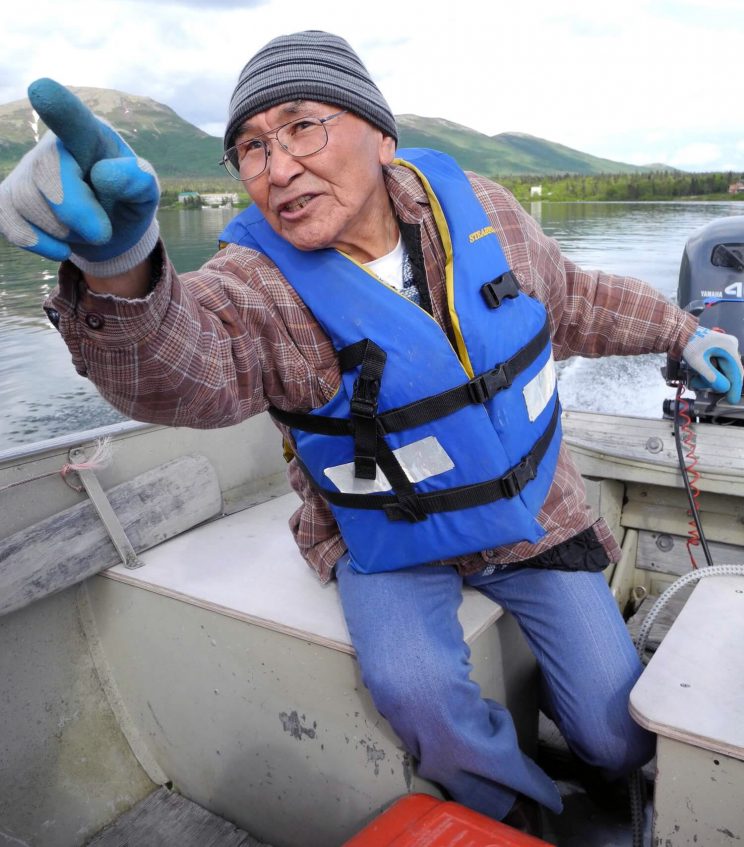 Bobby Andrew (1943-2015) was a Yup’ik Elder who worked internationally for over a decade to protect his home from the proposed Pebble Mine. Photo credit: Giovanna Marcantonio

United 'Tribes' of Bristol Bay, an organization representing fifteen governments of distinct Indigenous Peoples and over half of the region’s population, issued a statement quoting Alaska Native activist, Alannah Hurley:

“The Army Corps’ review ignores the very real concerns about the changes and devastation Pebble would bring to our region, and is clearly the result of a rushed process that has ignored local voices and ignores the existing science in the Bristol Bay Watershed Assessment that shows how devastating this project would be in Bristol Bay.” – Alaska Native activist Alannah Hurley

The wastewater would be heavily contaminated with toxic sludge, including heavy metal compounds left over from mineral extraction. Importantly, this hazardous wastewater would cripple salmon’s abilities to find their way to spawning beds to be able to reproduce.

Despite clear evidence that tailings ponds often fail, the DEIS does not bother to evaluate the risk of this kind of dam failure.

The DEIS only contemplates a 20-year time frame overall, which neatly avoids any acknowledgement of permanent risks that Pebble Mine would leave in the Alaskan landscape. The vast expenses involved in stabilizing massive amounts of liquid toxic wastewater for countless decades look much cheaper when merely two decades are accounted for.

Beyond this 20-year range, the tailings pond dam would be required to contain toxic tailings in perpetuity and would have a 1 in 5 five chance of failing within one hundred years. 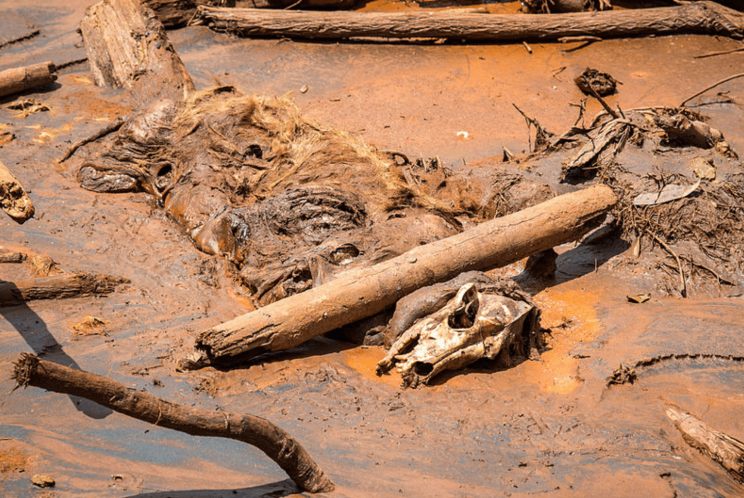 Officials continue to assess the destruction and ongoing environmental harm caused by the Fundão dam’s failure. Photo by Romerito Pontes from São Carlos

Additionally, Pebble Mine would require water treatment on a scale never before achieved (PDF) by any hard rock mine.

A dam seven times taller than the Washington Monument could be required to contain the tailings pond. Consulting firm Knight Piésold designed the Mount Polley Mine tailings pond dam that failed in 2014, leading to what was called Canada’s worst mining disaster. 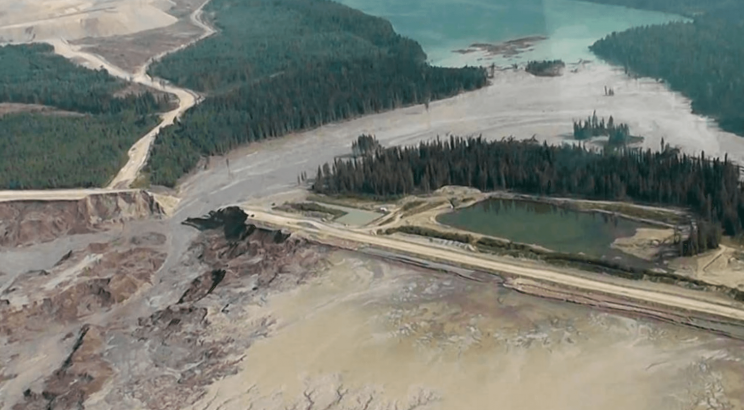 The Pebble Limited Partnership has proposed to the Army Corps of Engineers that Knight Piésold will design the tailings pond dam for the proposed Pebble Mine.

Making matters even more hazardous, some geologists say a fault line may run through or within 5 miles of the proposed mine site. Any fault line would increase the risk of the proposed tailings pond dam breaking open and spilling toxic materials into the headwaters of the Bristol Bay watershed. Some geologists believe the deposit the mine would aim to extract was likely created through geological effects of the fault itself. Mine proponents claim that the fault runs 18 miles away from the proposed mine site. 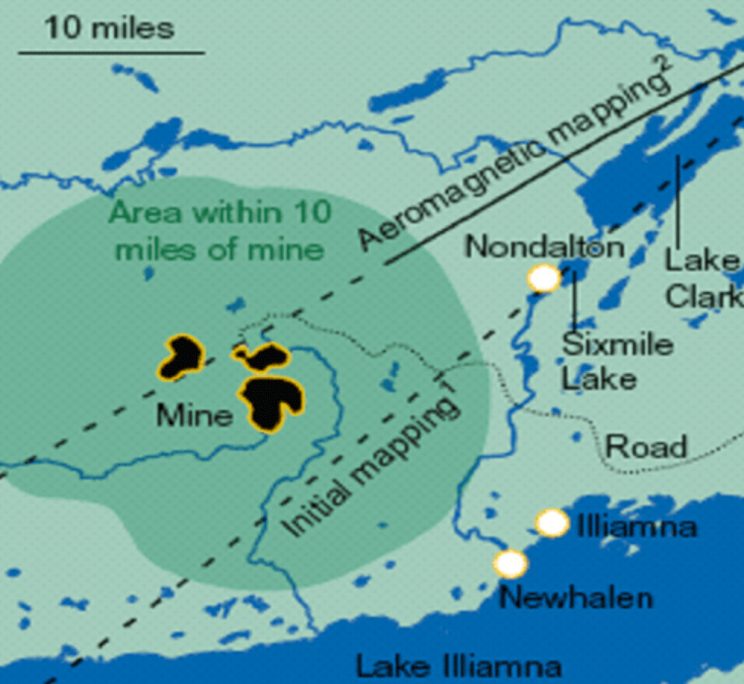 Geophysical locations of Lake Clark fault. Initial mapping of the Lake Clark fault estimates the fault to be within 10 miles. Aeromagnetic methods shows the fault a few miles to the north of the mine. In either case the the fault is likely closer than 18 miles, the distance PLP assumes in its hazard calculations. (Solid line is actual mapping of the fault, dashed line is extrapolation of mapping.) Brentwood “Hig” Higman Ph.D. generated this figure and grants permission for republication. It contains peer reviewed data published here.

“If the U.S. Army Corps of Engineers and the state of Alaska let Pebble get away with their current incomplete studies, their dams might be designed to fail in future earthquakes,” wrote Alaskan geologist Brentwood “Hig” Higman Ph.D, while gathering data on the history of earthquakes near the proposed mine site.

The DEIS does not address the fault line at all, though 4.6 to 5.7 magnitude earthquakes have occurred there and Higman wrote that a magnitude 7 or greater earthquake could occur there.

A previously unknown fault line triggered a massive 7.0 magnitude earthquake in Anchorage, AK, just 200 miles from the proposed mine site on November 30, 2018.

Permits from the State of Alaska would also be required for the Pebble Mine. In November 2018, Mike Dunleavy (R) was elected Alaska’s governor. All three of his daughters work at Alaska’s Red Dog Mine. In his first public appearance after taking office, Dunleavy spoke at a mining conference. He praised former Pebble Partnership CEO, John Shively.

Dunleavy has appointed Jason Brune, a former official of one of the mining companies that initially backed the proposed Pebble Mine, Anglo-American, to head the Alaska Department of Environmental Conversation. The agency is responsible for issuing dozens of state permits for the proposed mine.

Brune joked in a tweet last year that Christmas had come early when the proposed Pebble Mine entered the USACE permitting process, according to the Alaska Public Radio Network.

In the same election, an Alaska ballot initiative that would have required further permitting for the proposed mine was defeated after the backers were outspent 14 to one with support from the Pebble Partnership. Tom Collier, John Shively and a number of other current and former Pebble Partnership employees also donated to Dunleavy’s campaign.

At the beginning of March, Pebble Partnership CEO Tom Collier said “no one gives a rat’s ass about what happens in Alaska,” according to McClatchy. 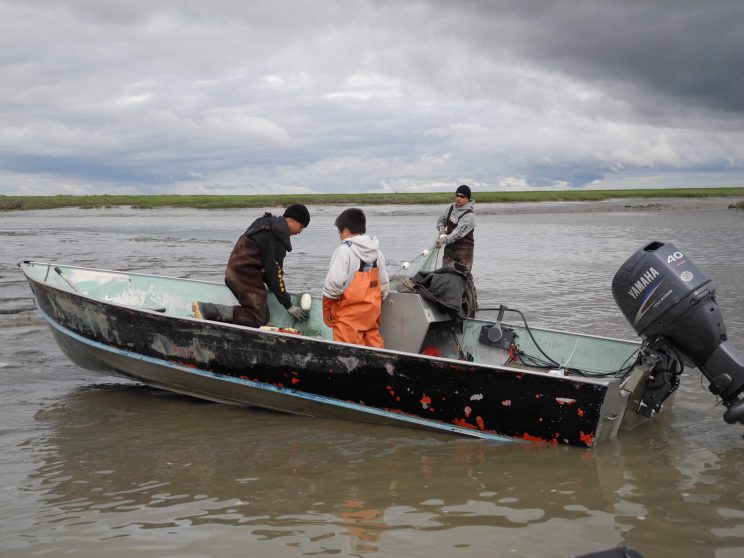 “I remember when I was a little girl (and) I first started cutting fish. I learned how to split my first fish. Everyone was so excited down (on) the beach, and my grandparents. There was two boat loads of fish and everyone was just having a good time. That’s what brings our family together, that’s what brings everyone together – the fish. If there was no fish, I think our culture would just completely die. It’s not just us who eats the fish, it’s the animals and the land uses it too.” – Heidi Kritz 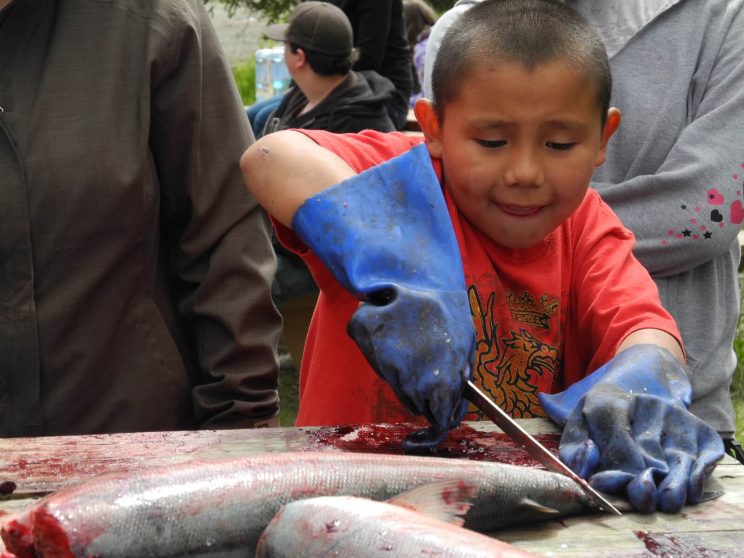 The Army Corps of Engineers is taking comments via their website. The current deadline is June 29, 2019. Updates about We Can’t Eat Gold are available via the film’s Facebook page.

N.B.: Unfortunately the terms Indian, Tribe, tribal have still not been vetted out of U.S. American legislation. READ UP