70 Million People had to flee their homes

By the end of 2017, persecution, conflict and violence had forced 68.5 million people from their homes.

That figure – from the UNHCR’s 2018 Global Trends Report – includes 25.4 million refugees (over half of whom are under the age of 18), 3.1 million asylum-seekers and 40 million internally displaced people.
The number of people displaced by conflict and persecution is the highest on record with one in every 110 people worldwide either a refugee, an asylum-seeker or internally displaced.
Good neighbours
The vast majority of refugees are living in middle- and low-income countries. While Turkey has the world’s largest refugee population, Lebanon and Jordan are hosting the highest number relative to population size.
In Lebanon there are 164 refugees per 1,000 inhabitants, which equates to one in six people. However, this figure excludes Palestinian refugees under the mandate of UNRWA, many of whom have lived in Lebanon since the 1950s. When this group is included, refugees make up a quarter of Lebanon’s population.

One in every 14 people in Jordan is a refugee under the responsibility of the UNHCR. That increases to one in every three with the inclusion of Palestinian refugees under UNRWA. 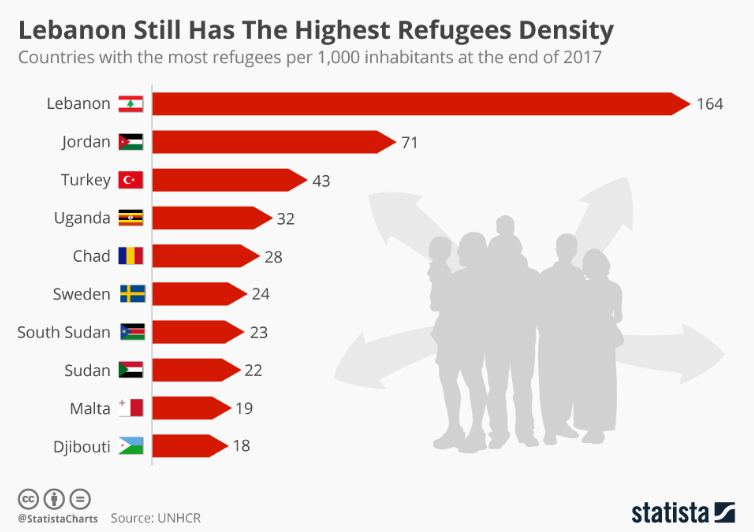 For the fourth straight year, Turkey hosted more refugees – 3.5 million at the end of 2017 – than any other nation. Most of these people were fleeing the conflict in neighbouring Syria.

In terms of total numbers in 2017, Pakistan and Uganda were next, hosting 1.4 million refugees each.
Since the start of the Syrian conflict in 2011, 6.31 million people have been forced to flee the country. That’s almost one-third of the world’s total refugee population.
At the end of 2017, two-thirds – 68% – of all refugees were from just five countries: Syria, Afghanistan, South Sudan, Myanmar and Somalia.
UN estimates put the number of newly displaced people in that year at 16.2 million, which equates to around 44,400 people fleeing each day.

That total includes 11.8 million people who left home but remained within their own country. Internally displaced people made up more than 80% of the nearly 5 million who returned to their homes or countries in 2017. Despite this, the global rate of forced migration remains at a record high and continues to outpace the returnee rate.
Filippo Grandi, UN High Commissioner for Refugees, has called for a coordinated global effort to tackle the problem. “We are at a watershed, where success in managing forced displacement globally requires a new and far more comprehensive approach so that countries and communities aren’t left dealing with this alone,” he said.
Share
Written by Johnny Wood, Senior Writer, Formative Content (The views expressed in this article are those of the author alone and not the World Economic Forum.)

This article is published in collaboration with Visual Capitalist

By Jeff Desjardins, Founder and editor of Visual Capitalist

Which countries do people live in, globally?

It’s a very simple question, but it’s also hard to get an accurate sense of the answer by browsing through a lengthy table of country-level population data.

That’s because there are close to 200 countries spread around the globe, with populations ranging from near 1.4 billion (China or India) to countries a mere 0.001% of that size. How is it possible to do the mental math in interpreting such a wide range of data points simultaneously?

Today’s data visualization comes to us from PopulationPyramid.net, a fantastic resource for data on global population numbers.

It allows us to see the location of the world’s 7.5 billion people by resizing countries based on their populations and then coloring and organizing them by region.

This simple application of data visualization makes it more intuitive to comprehend where people live around the globe, as well as how different countries compare in size.

The first thing you might notice on the graphic is the relative size of regions, with Asia taking up a whopping 60% of the visual space.

Here are those numbers by region broken down further:

When you look at it this way, you can really see how the math breaks down.

About 75% of people reside in Asia or Africa. Meanwhile, the regions of Europe, North America, South America, and Oceania just total together to 25% of the mix.

The 10 most populous countries

There are some countries that are clear standouts on the data visualization.

For example, China and India combine to 2.7 billion people, together accounting for 36% of the total global population.

Those heavyweights aside, there are other notable countries that take up significant amounts of real estate on the visualization as well:

The United States, Indonesia, Brazil, and Pakistan rank between #3 and #6, and have about a billion people between them.

Nigeria, which is #7 on the list, has the world’s fastest growing megacity within its borders. Further, Bangladesh is also a noteworthy entry since it is one of the densest populations globally, with 1,138.9 people per square kilometer of land.

A final look at global population

This isn’t the first time we’ve shown you a data visualization that organizes the global population – here’s one we previously published that shows each country in a bubble chart:

While this uses slightly older data, it is still interesting to see how data visualization can help us understand a complex and wide-ranging set of data that is relevant to everyday life.