Ogiek Traditions could Save Forests

The traditions that could save a nation’s forests Indigenous communities evicted from their ancestral forest lands in Kenya have plans to restore peace and biodiversity to their homelands.

In July this year, in the middle of Kenya’s rainy season, two indigenous communities living in western Kenya were evicted from their ancestral homes. The Ogiek people of the Mau Forest and the Sengwer people of the Embobut Forest were forced to leave by government forest guards, leaving hundreds of people displaced and their houses burnt to the ground. It was the middle of the rainy season, and families including young children were exposed to the unforgiving weather.

It was not the first time for either community. For the Sengwer, in fact, it was the second time this year that they were being evicted from the Embobut Forest in Kenya’s Cherangany Hills, in what has become a common occurrence over the years. The Ogiek too, have been repeatedly pushed out of their ancestral home in the Mau Forest.

Those carrying out the eviction were Kenyan Forest Service guards, a conservation force employed by the Kenyan government. In many countries, indigenous people are recognised as stewards of forests, but in Kenya indigenous groups have been perceived as encroaching on forest land.

In an effort to bring an end to these evictions, and to protect the forest habitat, the Ogiek and the Sengwer have proposed an alternative: to have their ancestral customary laws recognised as an effective forest conservation strategy. While unprecedented in Kenya, the empowerment of indigenous communities to preserve forests and natural habitats has worked elsewhere. For now, their hope hinges on having their ways of life recognised as a sustainable means to protect the forest. 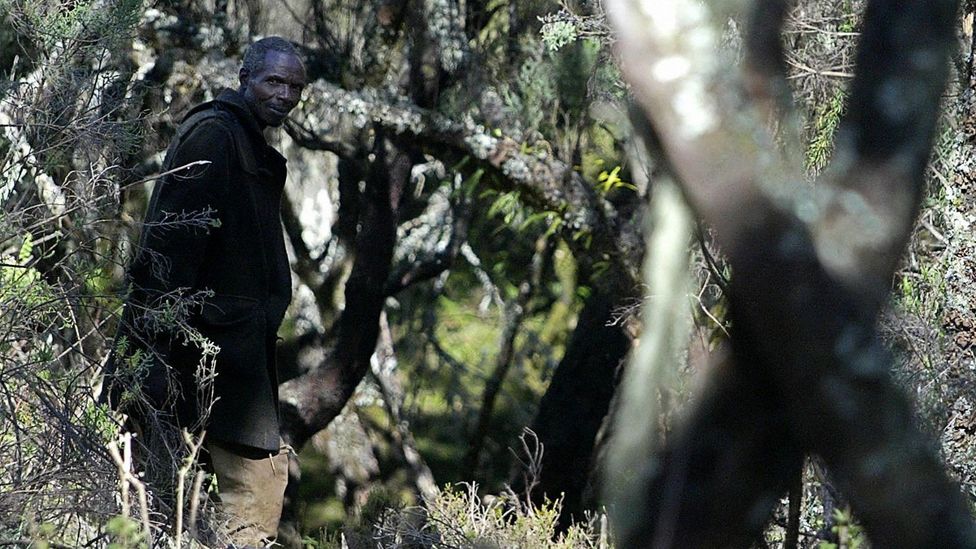 The elders of the Ogiek community recall the respectful way they would harvest only what they needed from the forest (Credit: Getty Images)

In the aftermath of clashes over the evictions, I visit Nessuit village in the Mau Forest. What used to be a collection of vibrant timber and tin-roofed shops is now a heap of charred remains, with many people crowded nearby.

The Ogiek are a hunter-gatherer community that inhabit the Mau and Mount Elgon forests in Kenya and some parts of northern Tanzania. It is those living in the Mau Forest who have suffered the most from evictions from their ancestral land. Traditionally, the community allocated sections of forest to each of its 12 clans. The Ogiek People’s Development Program, a non-governmental organisation, explains that this allocation was to ensure that they “protect, conserve, preserve and utilise the forest in a suitable and sustainable manner”, detailed a document that marries the community’s customary laws to national and international laws. Like the Ogiek, the Sengwer – a larger community of about 33,000 people, within 21 clans – have documented their customary laws, which they vow to abide by if allowed to live in and conserve the forest.

“It is our way of life that preserves the forest and our way of life is guided by taboos that regulated how we interact with each other, the forest and its resources,” says Milka Chepkorir, a member of the Sengwer of Embobut. Elias Kimaiyo, who is also Sengwer, was part of a team that documented these customary laws. “We have put the by-laws in writing so that they can see the difference and appreciate the fact that they are inexpensive and easy to use,” Kimaiyo tells me.

Lina Taploson, an elder and a leader of the Ogiek residing in the forest-edge hamlet of Ndoswa in the Mau, describes a similar relationship between her community and the forest. “We lived in the forest, had our traditions and got everything including food and medicine from the forest,” she says.

Both communities’ lifestyles historically did not depend on cultivation, ensuring that no forest was cleared. “Women and children only picked dry sticks from the ground as it was taboo to cut a tree for the purpose of firewood,” says Chepkorir, of the Sengwer traditions. For medicine, they picked herbs from roots, barks or leaves. “One was required to only pick what was adequate for use only and not to stock the medicine,” says Chepkorir. “[We] were also required to cover the injured part of the root, back or branch where the medicine was harvested from to prevent the tree from drying up.” 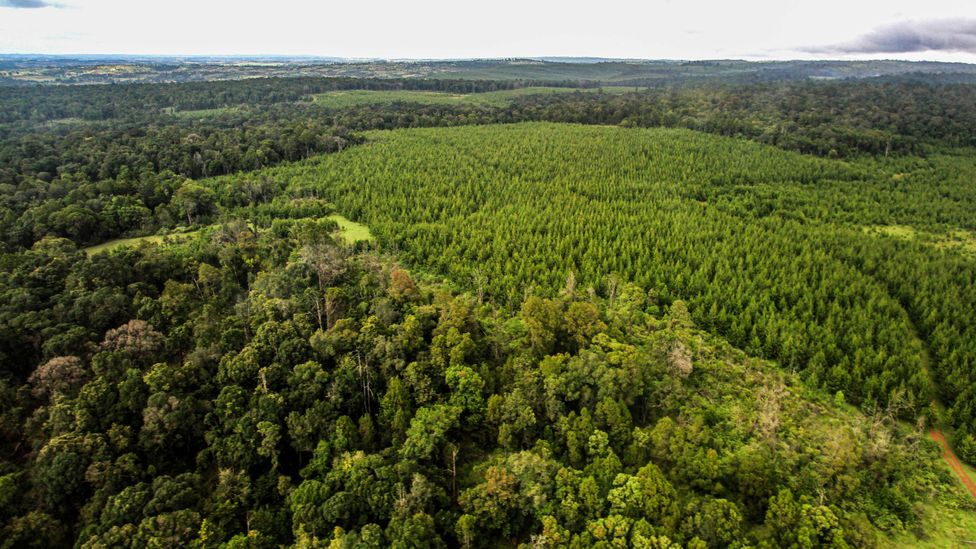 The Mau Forest in Kenya is home to the Ogiek community, who have faced multiple evictions from their ancestral lands (Credit: Getty Images) [N.B.: Since the colonial times, until toay: The oppressors of the Ogiek have invaded their natural forests with fastgrowing timber species that are not indigenous to the ecosystem and destroyed the natural ecological functions of the Mau Forest for nature as well as for the people.]

It was a similar picture for the Ogiek. Many of the useful plants grow under the shade of larger trees, meaning they too gained protection, says Taploson. “If the big trees were cut, we would lose the plants that grow under shade which we used in our rituals,” she says. “If a member of the community cuts down a tree without permission of the elders, they were held accountable. They would even be asked to pay a fine.” In more severe instances, they would be cursed.

Places like shrines and water sources were also fiercely protected within the forest by both the Ogiek and the Sengwer, in their respective lands. “These places were sacred and were protected and not a place to play with,” says Taploson. “The shrine that was in Ndoswa has been cleared.” Other customary laws regulate decisions such as the specific places to build, where to get building materials and where to hang bee hives.

Yet, from the colonial times to the present, authorities have in Kenya viewed forest communities as encroachers. Their approach to forest conservation has been criticised, as it favours “fortress conservation”, which works on the principle of separating humans and nature. While indigenous communities have been evicted, the Kenya Forest Service has attempted to boost forest cover by establishing plantations across the country. Yet plantations globally have been known to cause environmental, economic and social damage to rural landscapes and communities, according to a 2015 study. Meanwhile, in 2017, the African Court of Human and People’s Rights found that deforestation in the Mau Forest was due not to the Ogiek people, but by commercial logging.

The Kenyan authorities have carried out policies and used force to exclude people from lands and forests. The use of force has been synonymous with the Kenya Forest Service, which has a history of human rights violations according to human rights NGOs including the Kenya Human Rights Commission. In a 2018 presidential taskforce on forest resources management, it was estimated that Kenya’s forests have been depleted at a rate of about 5,000 hectares a year, accusing the Kenya Forest Service of “institutionalised corruption and being a system replete with deep-rooted corruptive practices, lack of accountability and unethical behaviour”. 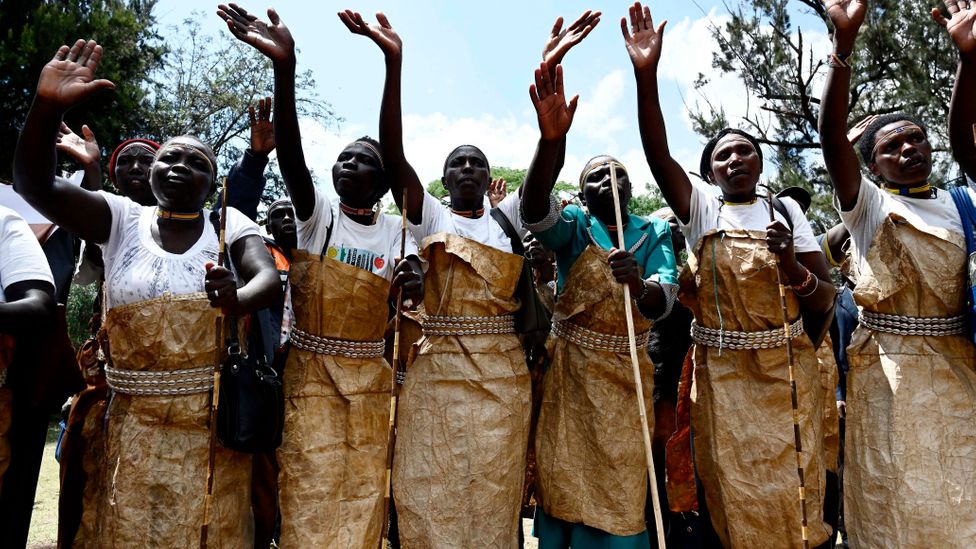 The Sengwer community of the Embobut forest have protested their evictions, while international bodies have condemned human rights abuses in the forest (Credit: Getty Images)

“The outdated fortress conservation model used by the Kenya Forest Service, which requires all human habitation to be removed from protected forests, has failed spectacularly,” says Brezhnev Otieno, campaigns manager of Amnesty International Kenya. The World Bank and the EU, which have funded conservation work in the Embobut, have denounced the human rights abuses in the forest.

Victoria Tauli-Corpuz, former UN Special Rapporteur on the Rights of Indigenous Peoples, told the African Court of Justice in April that the indigenous peoples are driven away from their lands because governments and conservation organisations continue to fail in applying a human-rights-based approach to conservation, despite numerous international commitments to do so. She observed that in many countries, government authorities “lack of capacity and political will to protect land has left such areas exposed to destructive settlement, extractive industries, illegal logging, agribusiness expansion, tourism and large-scale infrastructure development”.

But, looking to successful examples of indigenous conservation elsewhere, Tauli-Corpuz believes that change in Kenya’s forests is possible too. Tauli-Corpuz, a member of the Kankana-ey Igorot people in the Philippines, references her own community’s “batangan” system, which is the Kankana-ey system of conservation of forest through sustainable utilisation of its resources. This was recognised by the Philipines government in 1997, when it passed a law that included the need to recognise indigenous knowledge and cultures. “It happened because of the strong advocacy of indigenous peoples,” she says.

If allowed to be implemented, indigenous knowledge on forest conservation is likely to be better than current “fortress” strategies, Tauli-Corpuz believes. “These knowledge and practices have existed for a long time and now the evidence shows that where these are still being practiced and indigenous people’s rights to their lands, territories and resources are respected,” she says. “The forests are better protected and conserved.”

Amid the remains of Nessuit village in the Mau Forest, people are slowly picking up the pieces of their lives among the burnt-out remains of their buildings. But in the long term, this group’s security now rests on the acknowledgement of their age-old customary laws, that have the potential to protect both themselves and their ancestral forest home.

The emissions from travel it took to report this story were 59kg CO2, travelling by car. The digital emissions from this story are an estimated 1.2g to 3.6g CO2 per page view. Find out more about how we calculated this figure here.