The Gamblers and Peddlers of Global Death

PROLOGUE: They call it "In crisis: opportunity", but in reality it is warfare.

76 of the 91 loans the IMF has negotiated since the beginning of the coronavirus pandemic come attached with demands for deep cuts to public services and policies that benefit corporations over people. The enormous economic dislocation caused by the COVID-19 pandemic offers a unique opportunity to fundamentally alter the structure of society, and the International Monetary Fund (IMF) if using the crisis to implement near-permanent austerity measures across the world.

76 of the 91 loans it has negotiated with 81 nations since the beginning of the worldwide pandemic in March have come attached with demands that countries adopt measures such as deep cuts to public services and pensions — measures that will undoubtedly entail privatization, wage freezes or cuts, or the firing of public sector workers like doctors, nurses, teachers and firefighters.

The principal cheerleader for neoliberal austerity measures across the globe for decades, the IMF has recently (quietly) begun admitting that these policies have not worked and generally make problems like poverty, uneven development, and inequality even worse. Furthermore, they have also failed even to bring the promised economic growth that was meant to counteract these negative effects. In 2016, it described its own policies as “oversold” and earlier summed up its experiments in Latin America as “all pain, no gain.” Thus, its own reports explicitly state its policies do not work.

“The IMF has sounded the alarm about a massive spike in inequality in the wake of the pandemic. Yet it is steering countries to pay for pandemic spending by making austerity cuts that will fuel poverty and inequality,” Chema Vera, Interim Executive Director of Oxfam International, said today.

These measures could leave millions of people without access to healthcare or income support while they search for work, and could thwart any hope of sustainable recovery. In taking this approach, the IMF is doing an injustice to its own research. Its head needs to start speaking to its hands.”

Oxfam has identified at least 14 countries that it expects will imminently freeze or cut public sector wages and jobs. Tunisia, for example, has only 13 doctors per 10,000 people. Any cuts to its already scant healthcare system would cripple it in its fight against the coronavirus. “If people can’t afford testing and care for COVID-19 and other health needs, the virus will continue to spread unchecked and more people will die. Out-of-pocket healthcare expenses were a tragedy before the pandemic, and now they are a death sentence,” Vera added.

Ecuador is a perfect example of the consequences of IMF actions. Previously ruled by the radical administration of Rafael Correa, who made poverty reduction a priority, condemned the IMF and its sister organization the World Bank, and gave asylum to Western dissidents like Julian Assange, the country has been ruled by Lenin Moreno since 2017. Moreno immediately began unpicking Correa’s legacy, even attempting to prosecute him. In 2019, on orders from the IMF, Moreno slashed the country’s health budget by 36 percent in exchange for a $4.2 billion loan from the IMF, a move which provoked massive, nationwide protests that threatened to derail his administration.

The results were near-apocalyptic, as the country’s largest city, Guayaquil, became the worldwide hotspot for coronavirus, with bodies left to rot in the streets for days as services were overwhelmed. The city suffered more deaths than New York City at its height, and with far less infrastructure to deal with the problem. While the official number of cases in the country is low, the death rate has been among the highest in the world, suggesting that services have been completely overwhelmed.

Earlier this month, Moreno announced a new $6.5 billion deal with the IMF, who has advised his government to backtrack on emergency increases in health spending, stop cash transfers to those unable to work due to the virus and to cut fuel subsidies for the poor.

The IMF also directly interferes with the internal politics of sovereign nations. In March, it refused to lend to the Venezuelan government because of the “lack of clarity” about who was in charge, suggesting that the democratically-elected Nicolas Maduro would have to step down before they would consider lending to the country. At the same time, however, self-declared president and opposition figure Juan Guaidó announced that he had secured a $1.2 billion commitment from the organization on the proviso that Maduro resigns and allow an “emergency government” to take control of the country. A poll taken in the same month by a sympathetic pollster found that only three percent of Venezuelans backed Guaidó.

In crisis, there is always opportunity. For many, the pandemic is an opportunity to reorient the economy away from mass consumption and towards a more ecologically sustainable system. For the IMF, however, it is being used to push through more privatizations and austerity measures that invariably enrich the wealthy and weaken the poor and the powerless. It appears that, if the organization has its way, that it will be the poor who pay for the pandemic, while the rich prosper.

Alan MacLeod is a Staff Writer for MintPress News. After completing his PhD in 2017 he published two books: Bad News From Venezuela: Twenty Years of Fake News and Misreporting and Propaganda in the Information Age: Still Manufacturing Consent. He has also contributed to Fairness and Accuracy in Reporting, The Guardian, Salon, The Grayzone, Jacobin Magazine, Common Dreams the American Herald Tribune and The Canary.

Feature photo | A demonstrator holds a banner against International Monetary Fund during a protest in Quito, Ecuador, May 18, 2020. Photo | Dolores Ochoa. Editing by MintPress News

The IMF refused Venezuela a coronavirus emergency loan to buy medical eqipment and to fight #COVID19 unless it overthrows President Maduro and installs Washington-backed Juan Guaidó - their preferred candidate.

Bodies in the Streets: IMF Imposed Measures Have Left Ecuador Unable to Cope with Coronavirus

Ecuador is near collapse under the strain of coronavirus after the gov't stripped state services nearly bare at the behest of the IMF.

World Bank: Up to 150 Million More People Will Live in Extreme Poverty by 2021

The convergence of the coronavirus, combined with global conflict and climate change has put the goal of ending global poverty by 2030 virtually out of sight. 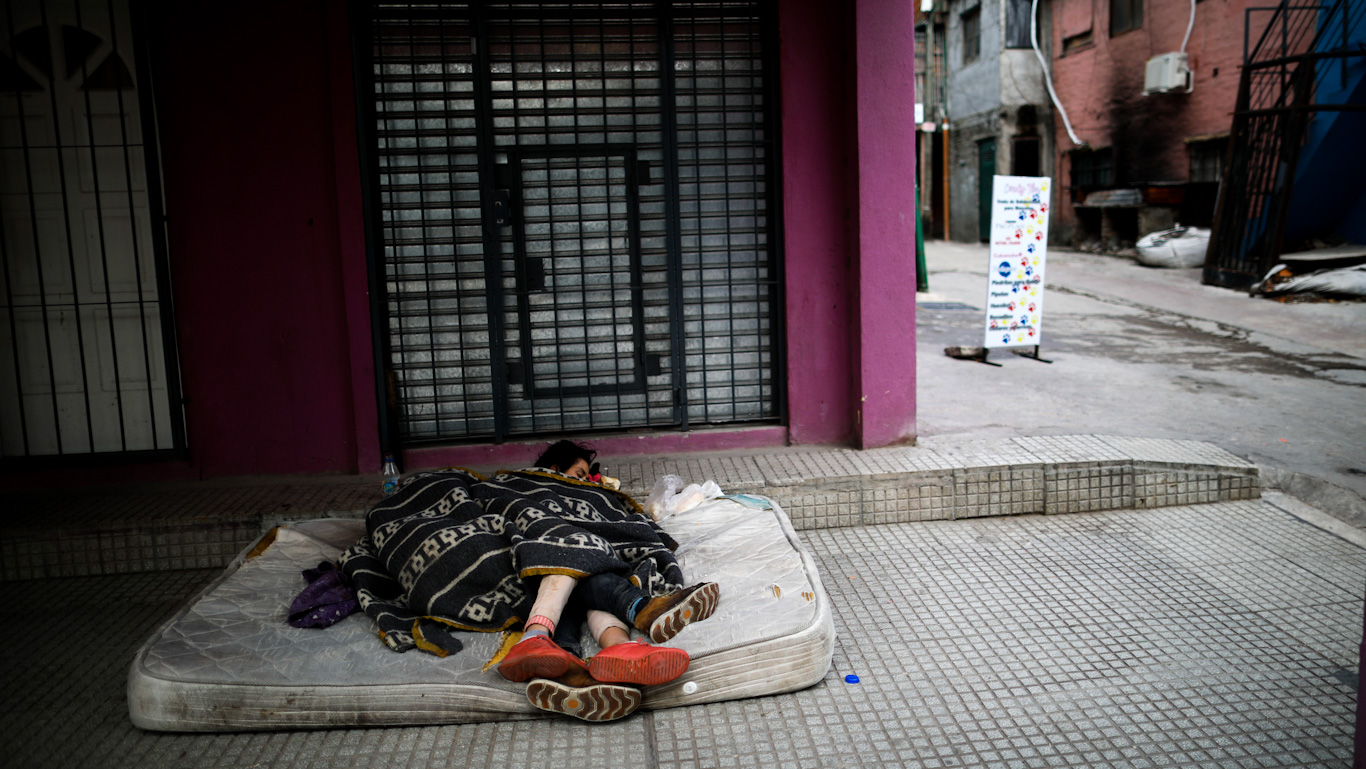 A new report from the World Bank estimates that the number of people living in extreme poverty around the world will increase by between 88 and 150 million by 2021, thanks in part to the COVID-19 pandemic. This represents an increase in the number, calculated as those living on less than $1.90 per day, for the first time in 20 years, according to the World Bank, rising to nearly 10 percent of the global population. The convergence of the coronavirus pandemic, combined with global conflict and climate change has put the goal of ending global poverty by 2030 virtually out of sight, the report warned.

82 percent of those newly impoverished live in middle-income countries, as vast numbers of people around the world lose their jobs, either to lockdown measures or due to the economic fallout that will follow the pandemic.

Yet the working class in richer and poorer countries are also suffering the brunt of the impact of the virus. 56 million Americans (including well over a third of poor Americans) have been forced to rely on a food bank during the pandemic, according to Pew Research. And by late July, 54 million had filed for unemployment insurance after the economy was shut down in an attempt to deal with the virus’ spread. One third of Americans also had to take a pay cut.

Meanwhile, those in poor countries are faring even worse. In April, the World Food Program warned of a potentially massive global hunger epidemic as the world’s poorest would no longer be able to afford food to eat.

David Beasley, the World Food Program’s Director-General, spoke of “multiple famines of biblical proportions” emerging, primarily in Yemen and the Horn of Africa. Yet following pressure from the Trump administration, aid to Yemen has been cut to just 25 cents per person per day, less than half of what the United Nations estimates is needed.

Over 36 million people worldwide have tested positive for the coronavirus, and there have been over 1.068 million deaths, although this is likely a conservative estimate. The countries with the highest official death tolls are the United States, Brazil, India, and Mexico.

A boon for billionaires

At the same time, the coronavirus has been a boon to the world’s elite, with large businesses able to withstand the pressure and adapt better than small ones. Even as huge numbers of people have had their lives’ work destroyed, the wealth of the planet’s billionaires has increased by around one-third ($1.5 trillion) during the pandemic. Tesla and SpaceX CEO Elon Musk has seen his fortune more than triple to $92 billion, despite the fact that his California Tesla plant was temporarily shut down due to the virus’ spread.

“The World Bank’s report shows clearly that billions of people were more vulnerable to the economic impacts of COVID-19 because of decades of economic policies which have kept them living one paycheck away from poverty, while the richest in society accumulate ever more wealth,” wrote Oxfam.

While the global economic devastation from the coronavirus pandemic is not in doubt, the World Bank’s poverty numbers have long been a source of contention, with many alleging they intentionally fiddle with their definitions of poverty in order to falsely make it seem like progress is being made. For decades, the organization has moved the goalposts on what constitutes extreme poverty, not taking into account other factors like inflation. Furthermore, while $1.90 might be enough to live on in some of the world’s poorest countries, it is laughably inadequate for a nation like the United States. In 2005, the government itself calculated that $4.50 was the minimum needed merely to meet nutritional requirements alone. Others have calculated that the $1.90 figure is not enough to ensure a standard life expectancy, but that increasing the figure would undermine the idea that progress is being made in the fight against poverty. And when figures from China (a country that has not taken the same path as the one the World Bank recommends), worldwide poverty reduction figures look even worse.

Critics of the World Bank say the Washington-based organization is far too close to the U.S. government and has effectively become a weapon of imperialism, forcing countries to open up their economies to Western multinationals and privatize national assets in exchange for loans, and that their advice to developing countries has only increased the poverty and misery of the people, leading to “lost decades” of development. As Jo Erickson wrote in MintPress, World Bank policies are expressly about “benefiting the wealthy and making poor poorer.”

“The figures are a damning indictment of the failed economic policies that will push hundreds of millions more people into destitution during this pandemic. Urgent action must be taken to protect labor rights, boost social safety nets and deliver a fairer tax system to close the gap between the richest and the rest,” said Oxfam.

Alan MacLeod is a Staff Writer for MintPress News. After completing his PhD in 2017 he published two books: Bad News From Venezuela: Twenty Years of Fake News and Misreporting and Propaganda in the Information Age: Still Manufacturing Consent. He has also contributed to Fairness and Accuracy in Reporting, The Guardian, Salon, The Grayzone, Jacobin Magazine, Common Dreams the American Herald Tribune and The Canary.

Feature photo | A homeless women sleep outside on a mattress in the “Villa 31” neighborhood during a government-ordered lockdown to curb the spread of the new coronavirus in Buenos Aires, Argentina. May 6, 2020. Natacha Pisarenko | AP