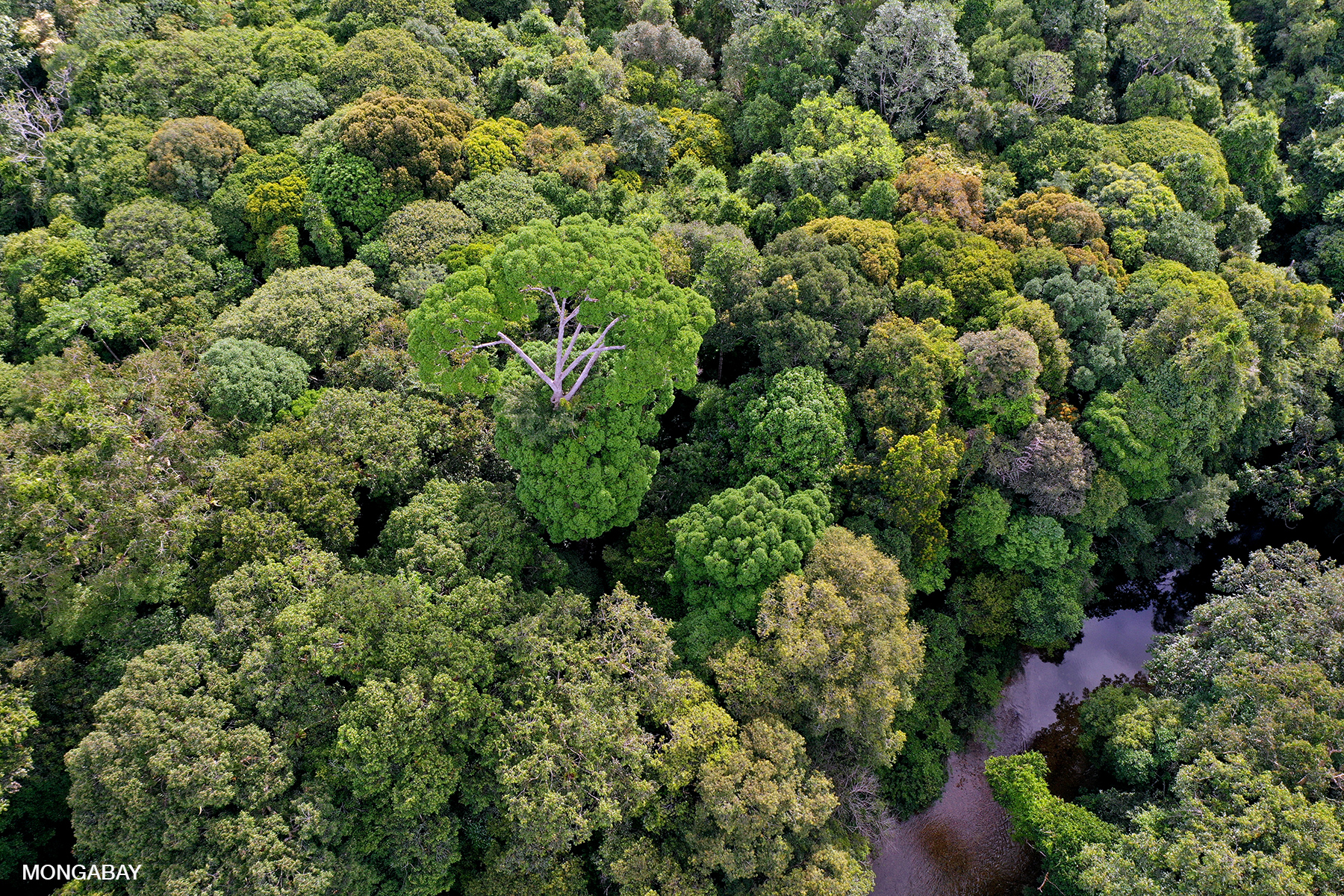 The island of Borneo is renowned by scientists for its biological bounty. From orangutans to pygmy elephants to towering dipterocarp trees, the forests of the world’s third largest island are some of the planet’s most diverse and for generations have sustained traditional indigenous peoples, who have built their livelihoods around the biological cycles of the forest and its wildlife.

But over the past half century, the rainforests of Borneo have been logged for timber; strip-mined for gold, coal, and sand; and drained, cleared, and burned for industrial plantations. Many of Borneo’s most forest-dependent peoples have been pushed off their lands or forced to abandon their traditional practices and livelihoods. The forests that local people primarily relied upon for sustenance are now felled to feed commodities into the global market. 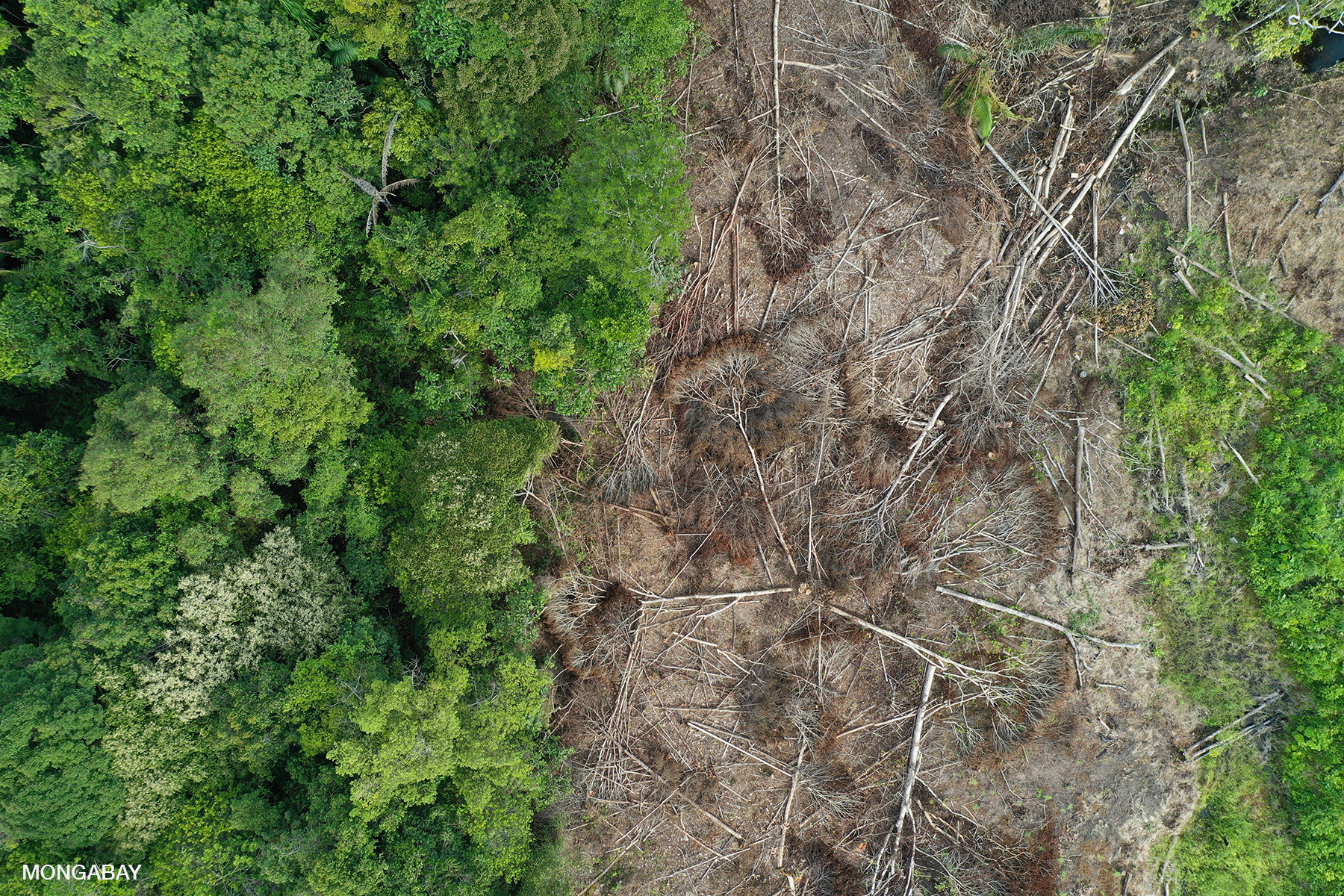 But one community living in Indonesian Borneo near the border with the Malaysian state of Sarawak has managed to fend off loggers and land invaders from their forest home. The Dayak Iban of Sungai Utik, a hamlet of Batu Lintan village in Kapuas Hulu Regency, West Kalimantan, have preserved more than 6,000 hectares of old-growth rainforest in their 9,450-hectare customary forest by observing their traditional customs that limit where they hunt, how many trees they harvest for personal use, how they use fire, and where they grow crops. The customary forest is a source of freshwater, food, and renewable forest products for the community and functions as a buffer for the nearby Betung Kerihun National Park.

Sungai Utik’s efforts to sustainably manage its community forest in the face of large-scale deforestation and cultural loss across Borneo have won it accolades, including the United Nations Development Programme’s (UNDP) Equator Prize last month, recognition in documentary films like Hope by If Not Us Then Who?, and the first customary forest to obtain an ecolabel certificate from the Indonesian Ecolabel Institute. Sungai Utik’s embrace of customary practices — including its traditional longhouse, which houses more than 300 people — also make it an icon among other indigenous communities, attracting Iban from Sarawak who come to learn how the people of Sungai Utik have maintained their culture, preserved their traditional knowledge, and protected their customary forest. 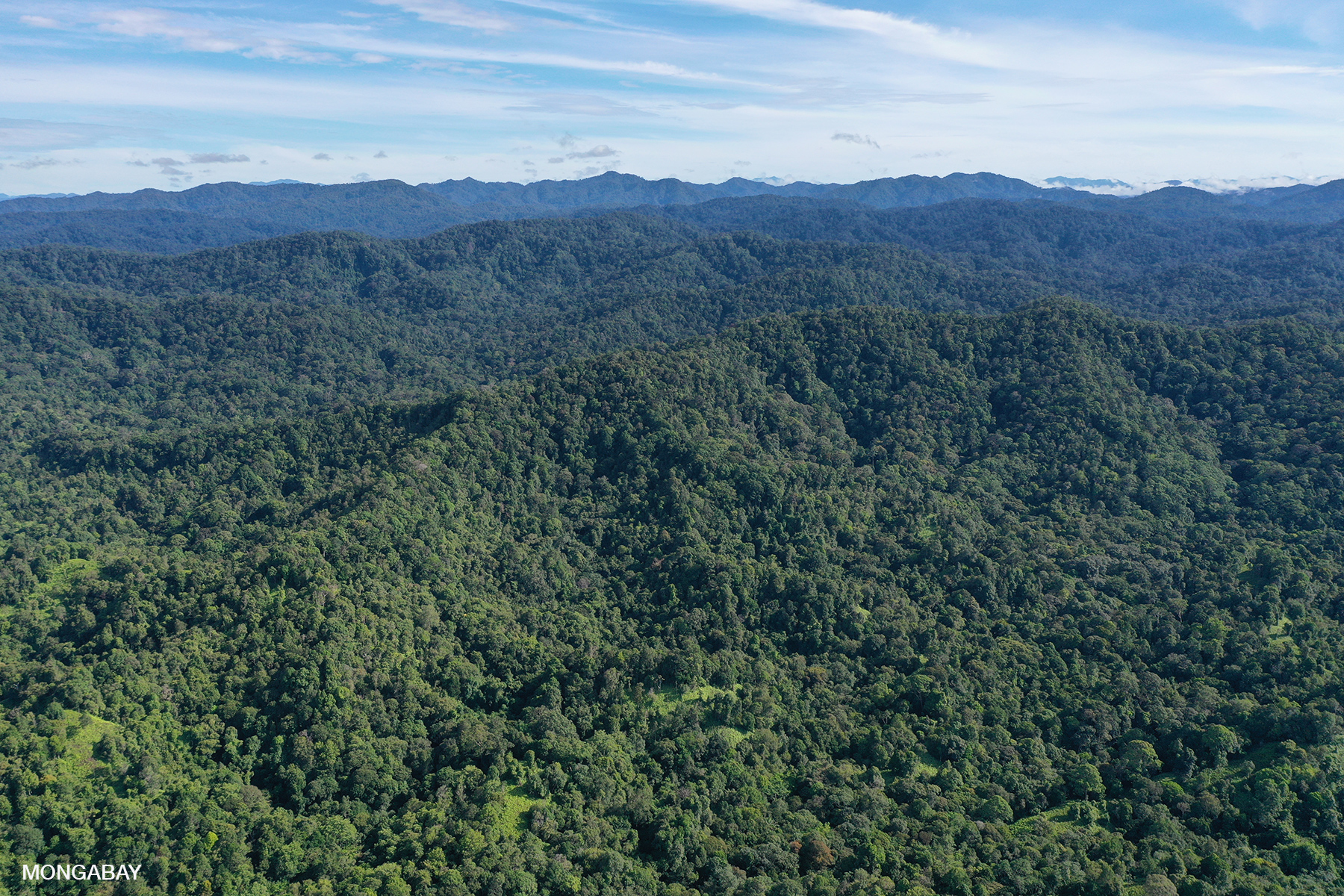 A view of the rainforest stretching from Sungai Utik customary forest in West Kalimantan to the mountains in Sarawak. Photo by Rhett A. Butler

During a June 2019 visit, Mongabay founder Rhett A. Butler and Mongabay-Indonesia correspondent Aseanty Pahlevi spoke with Apay Janggut, or “Bandi”, the head of the Sungai Utik longhouse. In his late 80s and having served as the Sungai Utik for more than 20 years, Bandi recounted the community’s resistance to loggers, talked about winning the Equator Prize, and discussed Sungai Utik’s efforts to adapt to issues facing indigenous peoples around the world.

Bandi’s responses were translated into English by Aseanty, who published a related story on Mongabay-Indonesia, and have been edited for brevity and clarity.

AN INTERVIEW WITH APAY “BANDI” JANGGUT, AN IBAN LEADER IN BORNEO

Mongabay: First, congratulations on winning the Equator Prize. That is a great honor.

Bandi: We didn’t do anything special to win this award. We were just following our traditions, which respect and protect the forest.

But we’re happy to get the recognition and hope it can help us in our struggle to win formal title to our customary land. 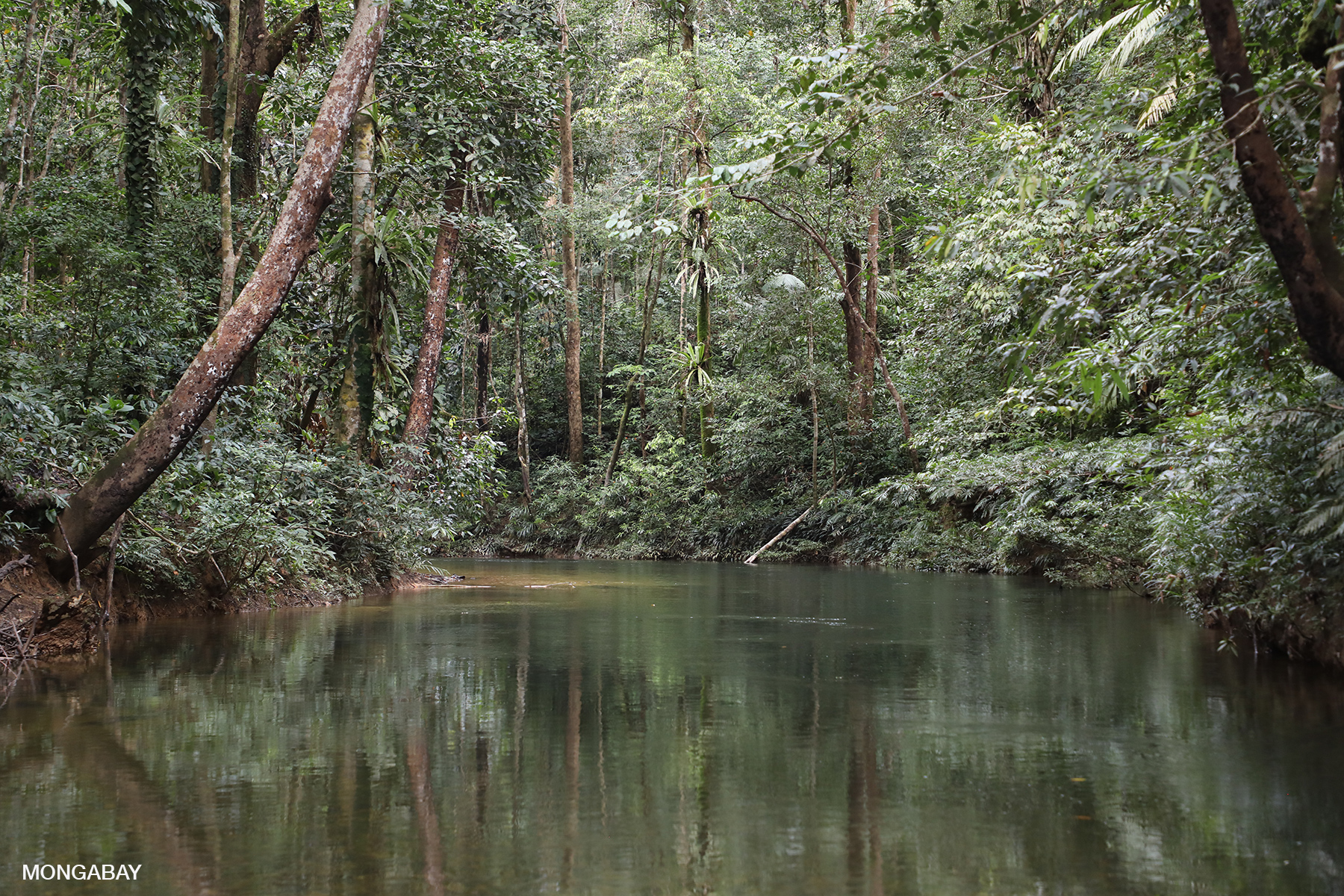 Mongabay: How is the legal recognition process going?

Jokowi has said the government would recognize a million hectares of indigenous lands and we’ve seen other regions have gotten certificates of recognition. So we feel that Sungai Utik’s customary forest should be officially recognized. That process is formally under way with the help of AMAN. 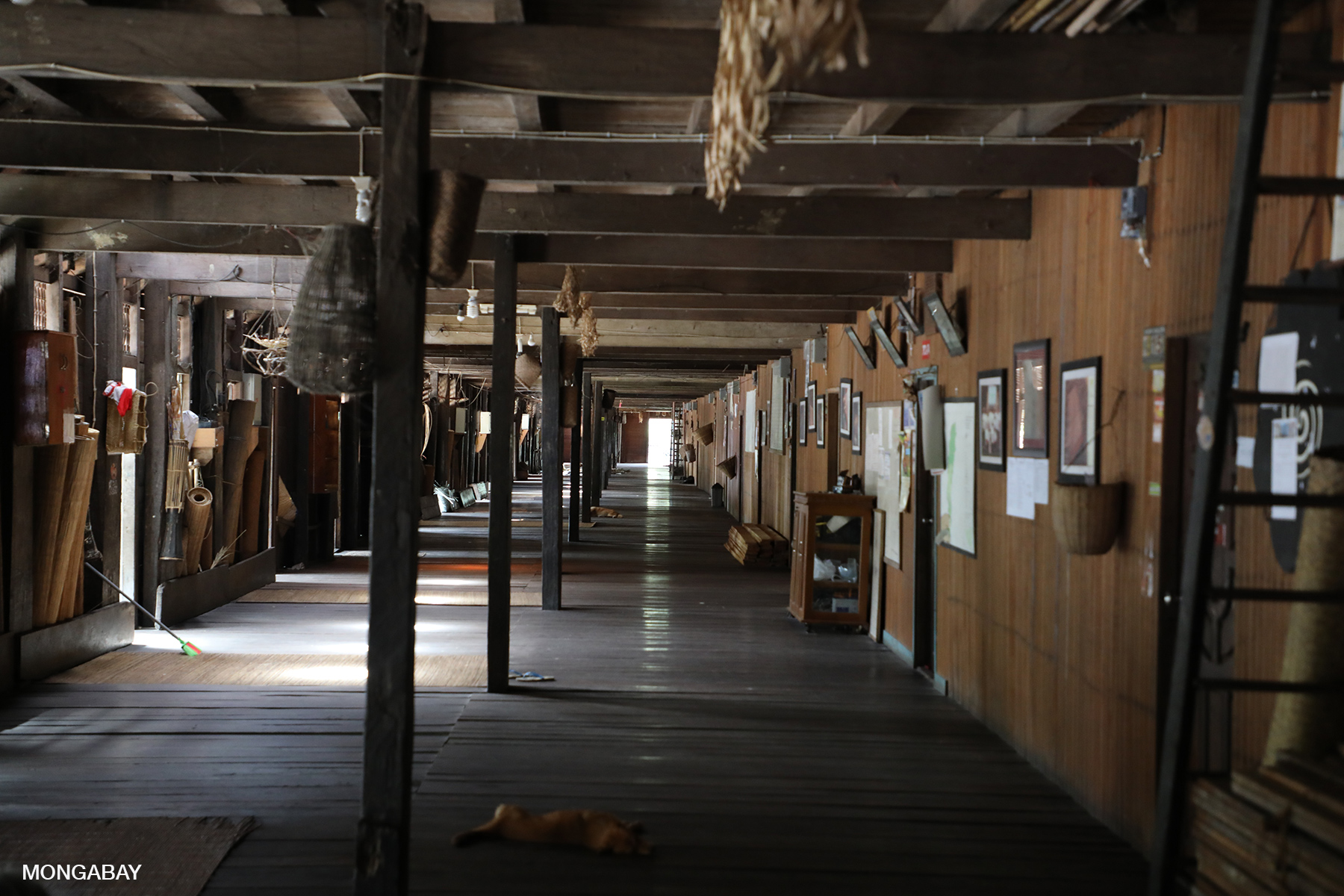 The long communal room at Sungai Utik. Photo by Rhett A. Butler

Mongabay: We visited Langkau Ngetu and saw the beautiful primary forest the community of Sungai Utik has protected. How have you been able to protect the forest?

The forest is our supermarket. It is a source of clean water; medicinal plants; resins; wood for our houses, stoves and canoes; fish and game.

Parts of the forest, like sacred groves, are left untouched for ritual activities and spiritual reasons. 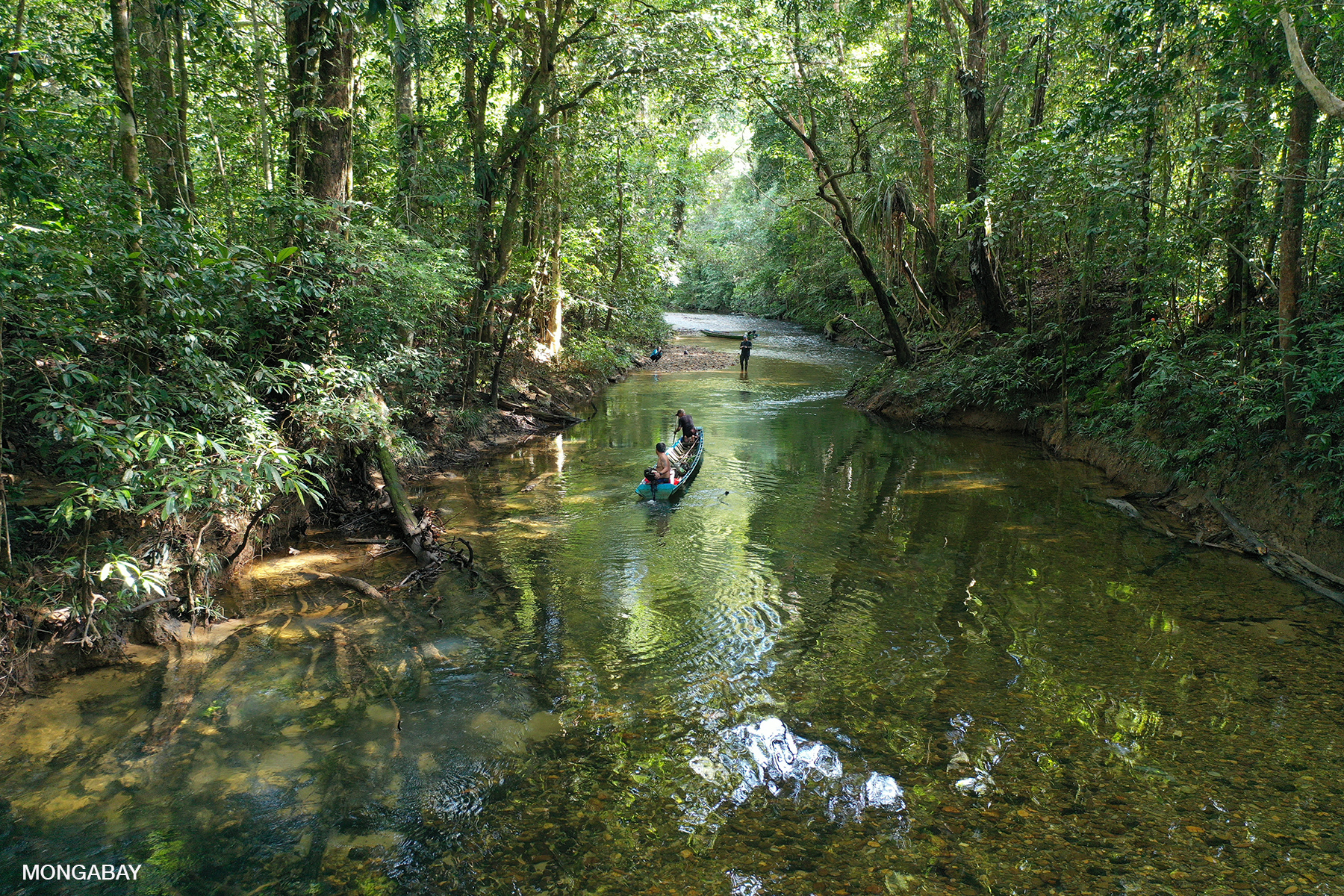 Iban taking a dugout canoe up the Utik river in Sungai Utik customary forest in West Kalimantan. Photo by Rhett A. Butler

The parts of the forest that are used are governed by Iban customary law. For example, 3,500 hectares of our customary forest is a production area for agriculture, like paddy rice, rubber, and other plants. Hunting is allowed only in certain areas at certain times of the year.

We patrol the forest to protect it from outsiders who come to cut trees or hunt.

Mongabay: There is a lot of oil palm in West Kalimantan. Have you had issues with companies trying to take your land or other types of encroachment?

Bandi: In 1979, a company acquired a permit to log our forest. But our community was against logging and we fought the company. Because of our resistance, the company left.

Outsiders have tried to exploit the forest, but we stopped them.

Mongabay: Have there been changes since you built the longhouse?

Bandi: Climate change is affecting us. Rainfall is less predictable than the past, which affects rivers and it is hotter.

But protecting our forest keeps the river flowing, fresh, and clear. The forest provides us with clean air. Keeping the forest means protecting life.

The community’s needs have changed. We are doing eco-cultural tourism. One of the members of the community manages this. We’d like to have [mobile] signal and better electricity, so the community is better connected. 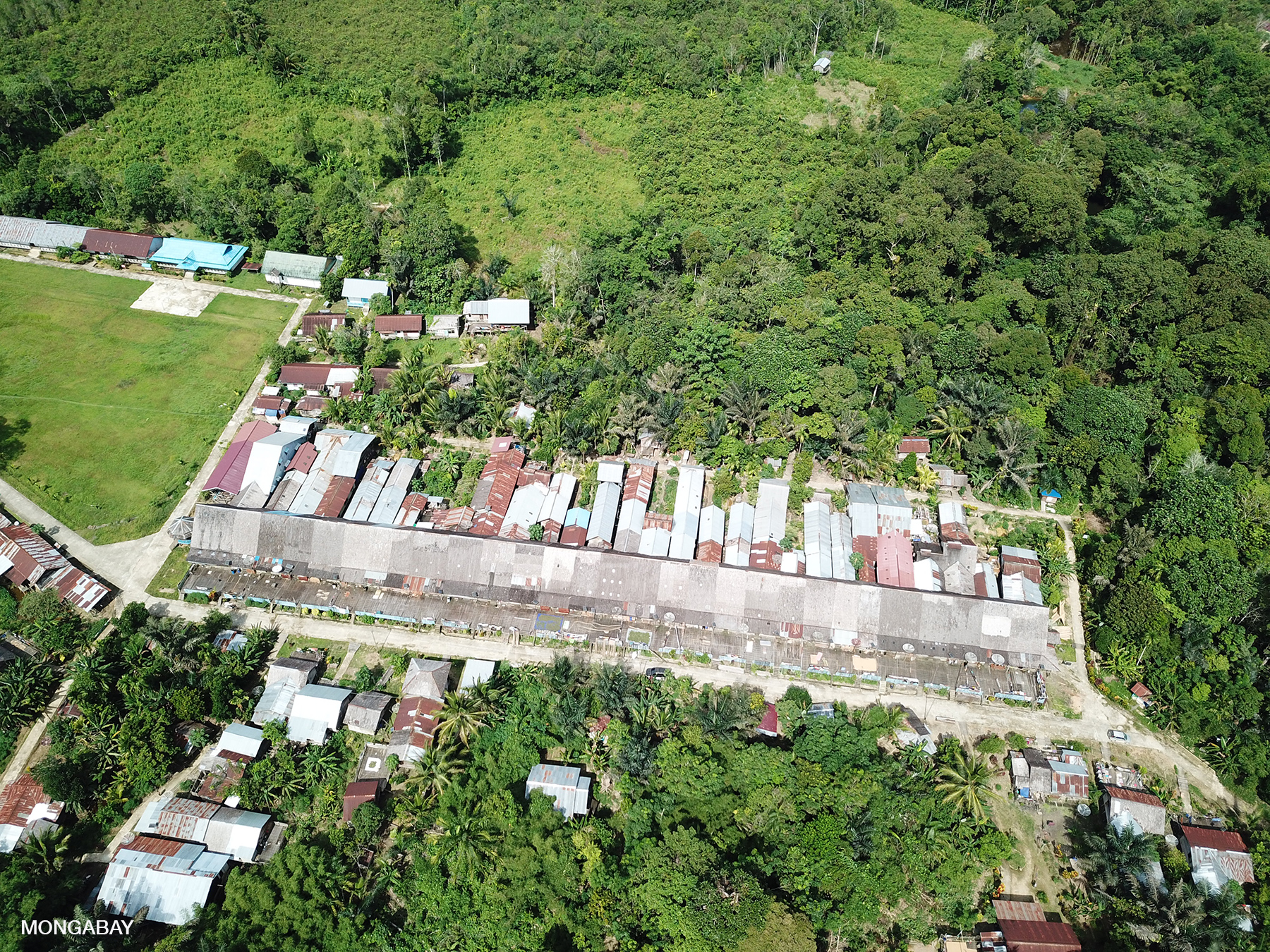 Sungai Utik longhouse in West Kalimantan, Indonesia. The communal longhouse has 28 doors, each of which lead to the private quarters of an Iban family. The communal space includes a long room, the veranda, and the deck. Photo by Rhett A. Butler

Mongabay: Beyond ecotourism, what are some of the other community initiatives that you are proud of?

Bandi: We are making a book about all plants in the forest and how they are useful in the daily lives of the Dayak people. For example, plants that are used to season food, for ethnic ceremonies, to color woven fabric, Bintangor sap for treating cancer, and so on.

We hope the book will help us pass traditional knowledge on to future generations.

We also hope this effort will help the government understand that the forest is meaningful for reasons other than timber, mining, and palm oil.

Utik river in Sungai Utik. Photo by Rhett A. Butler

Mongabay: What would you like to tell the outside world?

Bandi: We want the world to know about what we’ve done to protect our forest so other communities can do the same. This forest is our mother. If we do not protected it, it will be angry. And if it is angry, there will be many disasters.