Ecosystems will continue to collapse around the world unless humanity listens to the expertise of Indigenous communities on how to live alongside nature, a prominent Amazon leader has warned.

Tuntiak Katan of the Ecuadorian Shuar people, who is vice-president of the pan-Amazon organisation representing communities in the river basin, said governments were spending millions of dollars on environmental consultants while largely ignoring the land management skills of the planet’s indigenous people that could help combat the climate crisis and biodiversity loss.

Speaking to the Guardian from the Ecuadorian Amazon, Katan, who became the first indigenous representative at a UN climate action summit last year, said environmental “catastrophes” such as the fires that devastated the world’s largest rainforest in 2019 would continue unless the contributions and human rights of indigenous people were respected.

Indigenous communities support around 80% of the planet’s biodiversity despite accounting for less than one twentieth of the human population, according to the World Bank.

Katan’s warning came as a new study revealed that parts of the Amazon rainforest under the stewardship of indigenous peoples sequester carbon better than areas with little protection, leading to less deforestation and degradation.

“We are the defenders of nature, of the life of the forests, of our territories,” said Katan, vice-president of Coordinator of the Indigenous Organizations of the Amazon River Basin (Coica). “The world is investing lots of money to implement public policy to combat climate change, help conservation and restoration. But these policies are made in offices by technical experts with little or no knowledge of the Earth.”

Biodiversity loss was named as the third biggest risk to the world in terms of likelihood and severity this year by the World Economic Forum, ahead of terror attacks, infectious diseases and interstate conflict. 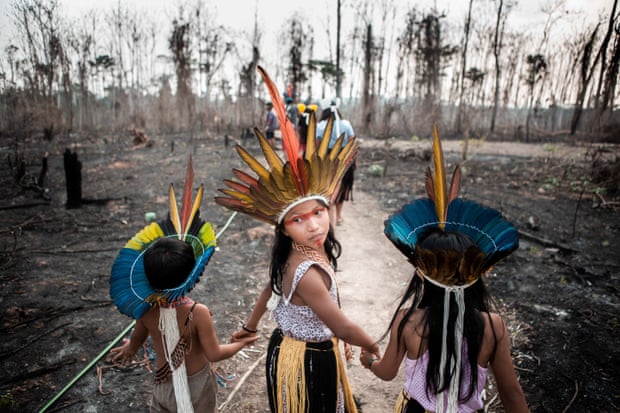 Children from the Huni Kuin people on land ravaged by the 2019 Amazon fires. Photograph: David Tesinsky/Mediadrumimages

Despite the concerns expressed by the global elite in Davos, there was no indigenous representation at last week’s forum in the Swiss ski resort, according to Katan. He said he would welcome the opportunity to attend next year’s forum to outline an indigenous economic model based on maintaining the health of the world’s soils, rivers and the forest.

“If the proposals, knowledge and management practices of indigenous people are not listened to, there will be more big catastrophes. The issue of fires in the Amazon will continue, the degradation of forests and water will continue, deforestation will continue,” Katan added.

This month, the UN unveiled the draft of a Paris-style agreement on nature calling for a commitment to protect at least 30% of the planet, dramatically reduce pollution and promote the participation and practices of indigenous people.

“In Indonesia, for example, they also have a lot of knowledge about how to manage tropical forests. But the same story is being repeated here as in other parts of the world: the lack of recognition of their knowledge and the lack of respect for the human rights of indigenous populations.”

Anti-indigenous sentiment is increasing in some parts of the planet. This month activists said they would sue Brazil’s far-right president Jair Bolsonaro for his latest racist comments in which he questioned the humanity of indigenous communities.

In one of his weekly Facebook broadcasts, Bolsonaro declared: “Indians are undoubtedly changing … They are increasingly becoming human beings just like us.” 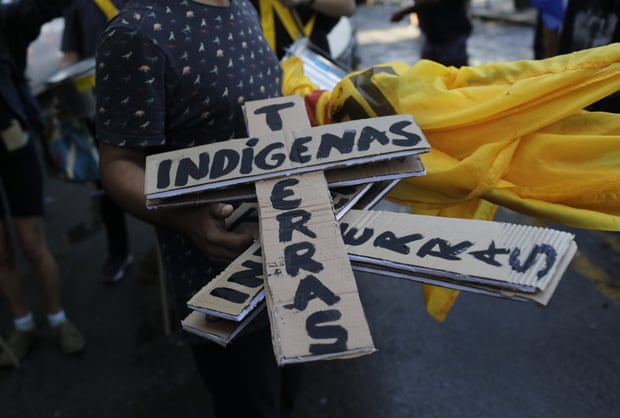 The new study from the Woods Hole Research Center in Falmouth, Massachusetts, found that between 2003 and 2016, 90% of net emissions came from outside protected lands in the Amazon.

Scientist and lead author Wayne Walker said: “Our work shows that forests under the stewardship of indigenous peoples and local communities continue to have better carbon outcomes than lands lacking protection, meaning that their role is critical and must be strengthened if Amazon basin countries are to succeed in maintaining this globally important resource, while also achieving their commitments under the Paris Climate Agreement.”

The findings add weight to the recommendations of a report on land use and the climate crisis by the Intergovernmental Panel on Climate Change (IPCC), which found that areas held or managed by indigenous peoples had much less human impact on the environment.

The report also highlighted the lack of consideration of indigenous views and knowledge in understanding large regions and ecosystems.

Find more age of extinction coverage here, and follow biodiversity reporters Phoebe Weston and Patrick Greenfield on Twitter for all the latest news and features